Something is lost in leaving the studio behind: the clear view of facial expression and the immediacy of corrections and adjustments made in front of one’s eyes. The intimacy of the studio gives way to public space and a larger cast of characters in the drama of putting on a show.

And something is gained. The “magic”—trite as it is, there is no other good word—of performance. Theater week is the extended moment when all the settings and props, light and sound that will bring the show to fruition before an audience—the “production values,” to use a rather soulless term—are layered in. 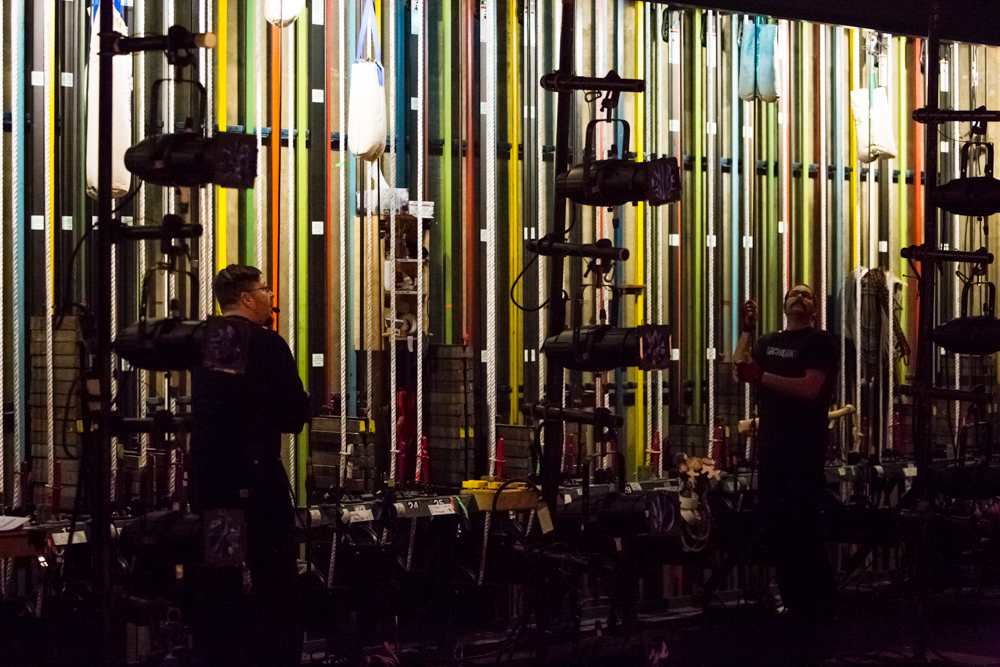 Moving into the theater is a transformative moment—for choreographers, dancers, stage manager and crew, lighting designer, and watchers like me. 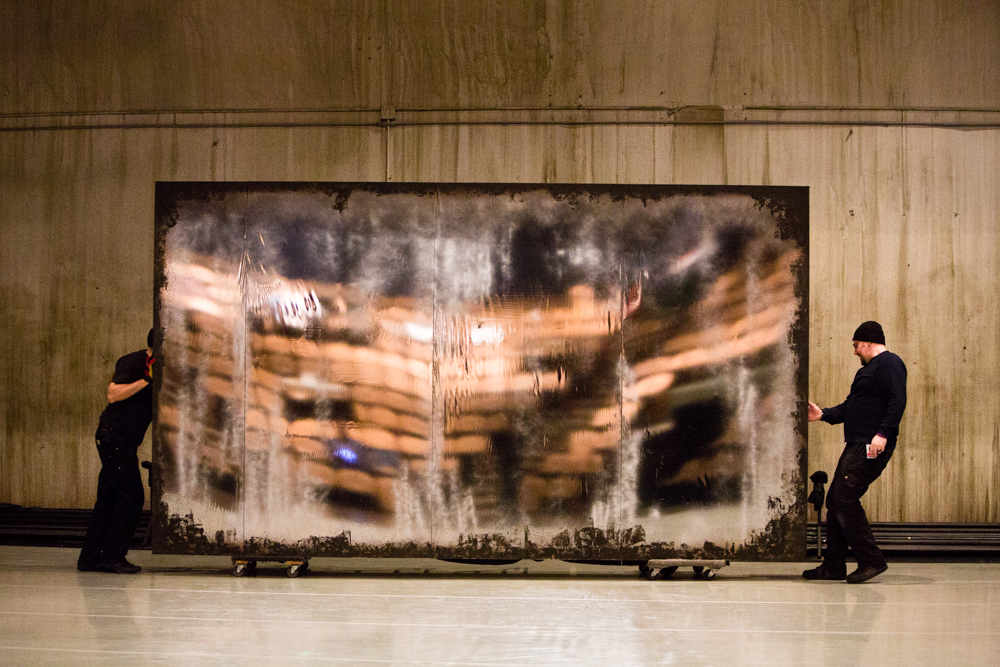 THREEFOLD opened Friday night (to a packed, SRO house) with Whim W’Him artistic director Olivier Wevers‘s new We Are Not the Same.  On Wednesday, having already watched many rehearsals, I meant just to sample a lighting rehearsal for the piece,
but stayed on transfixed by the silent dancers moving as directed into different configurations and the soft voices of master lighting designer Michael Mazzola and Olivier as they decided when and how to deploy stacked racks of lights from the sides and tried different shapes, intensity, and texture of light patterns on the stage floor.

[Two spotlights on the floor almost touching] OW: It was more interesting before.
MM: Like a boomerang?
OW: Yes, but can we lose the front edges?
MM: Yes.
OW: Yes! That’s more interesting to me, asymmetrical, not expected, not in a line, and it looks as if there’s just one spotlight… 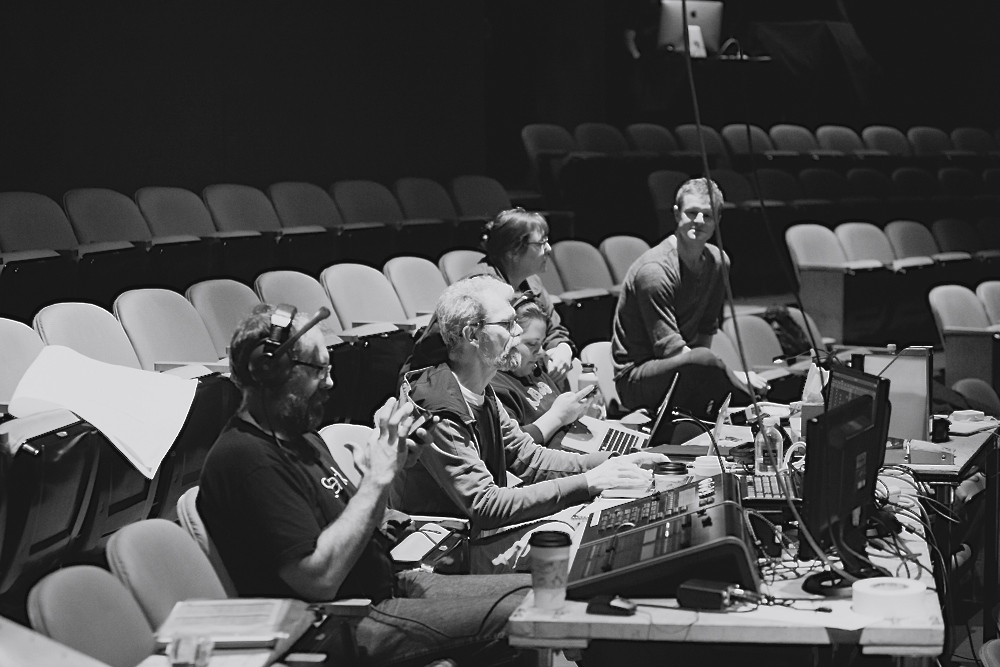 There are no colors. The two couples (Jim Kent/Justin Reiter, Kyle Johnson/Tory Peil) are in gray; even their skin is somewhat leached of pigment, in a wedding of black-and-white film starkness with the movement and three-dimensionality of live dance.
A captivating tension between austere lighting and spiraling, almost rococo movement. 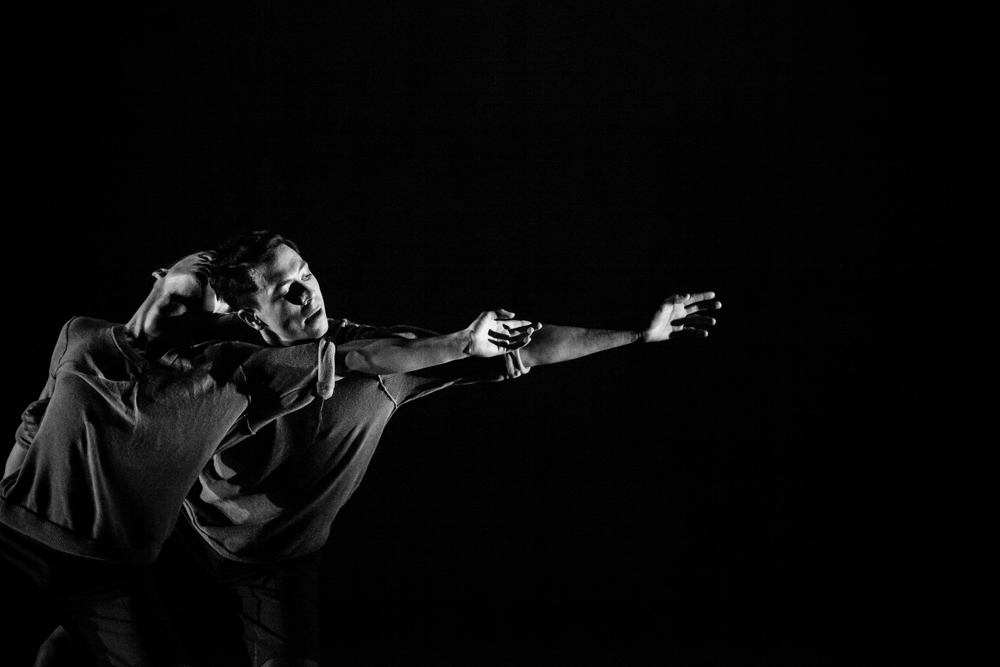 Being there as Michael and the choreographers slowly, meticulously sculpt with light,
on the floor of the stage and in the air above it where the dancers move, is like observing a master painter fill a canvas or like watching images come up out of developer in an old fashioned darkroom.

The first time I observed the whole of Loni Landon‘s new year new you onstage, it was the aural aspect that struck me most. It winds around dancers Mia Monteabaro, Jim and Justin, sometimes with and sometimes counter to them, in line with the theme of the piece—reinventing yourself. 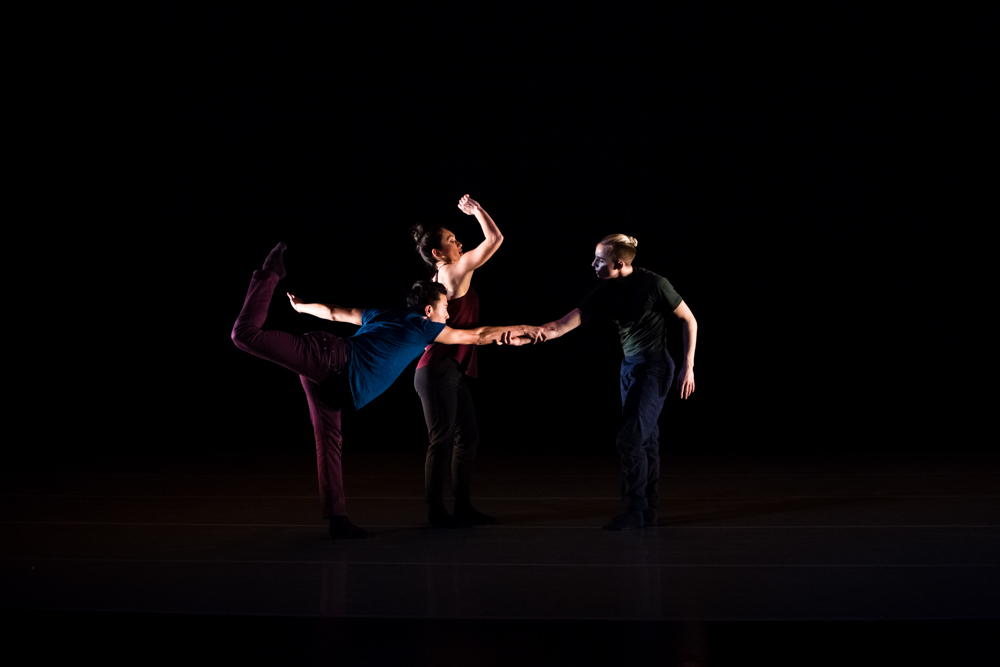 Dylan f Ward‘s soundscape ranges in volume from blasting to silent, utilizing music by himself and Robert Henke, as well as extended samples from Hauschka (Barfuss Dursch Grass) and Nils Frahm (Let My Key Be C). The final song, unexpected and amusing in context, is a remix of the McGuire Sisters’ televised medley of their hits Start the New Year Right and Here’s to Us, as the dance builds to its surprising final moment. 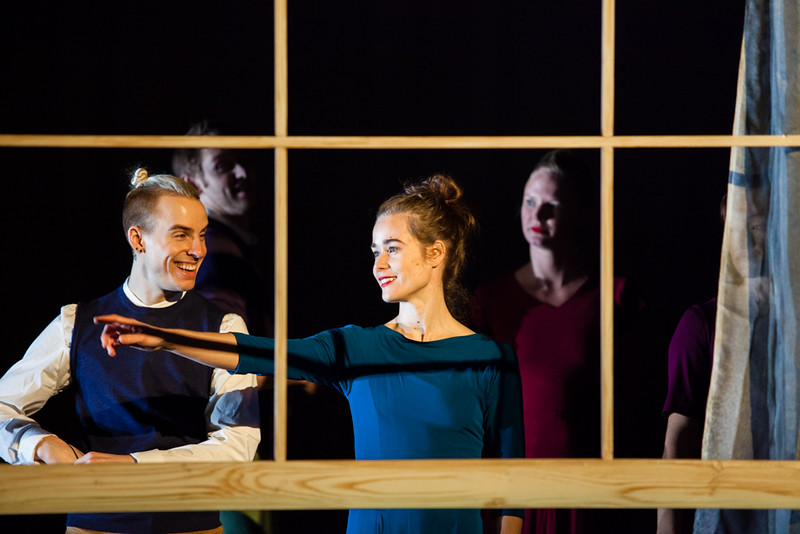 The dancers are clad in updated versions of 1950s-style dresses or white shirts, long pants, and sweaters (Thomas Phelan‘s dark purple pullover has violet plaid elbow patches). The jewel tones worn by the women (featuring Lara Seefeldt as Jo, Edward Hopper’s wife, in a vibrant peacock blue), are especially vividly reflected in a large reflective wallas they fly and roll and whirl across the stage.

LAST SHOW was Sunday night (Jan 18) at Cornish Playhouse in Seattle Center—
Whimmers who wore SEAHAWKS gear to the show got a free beer! 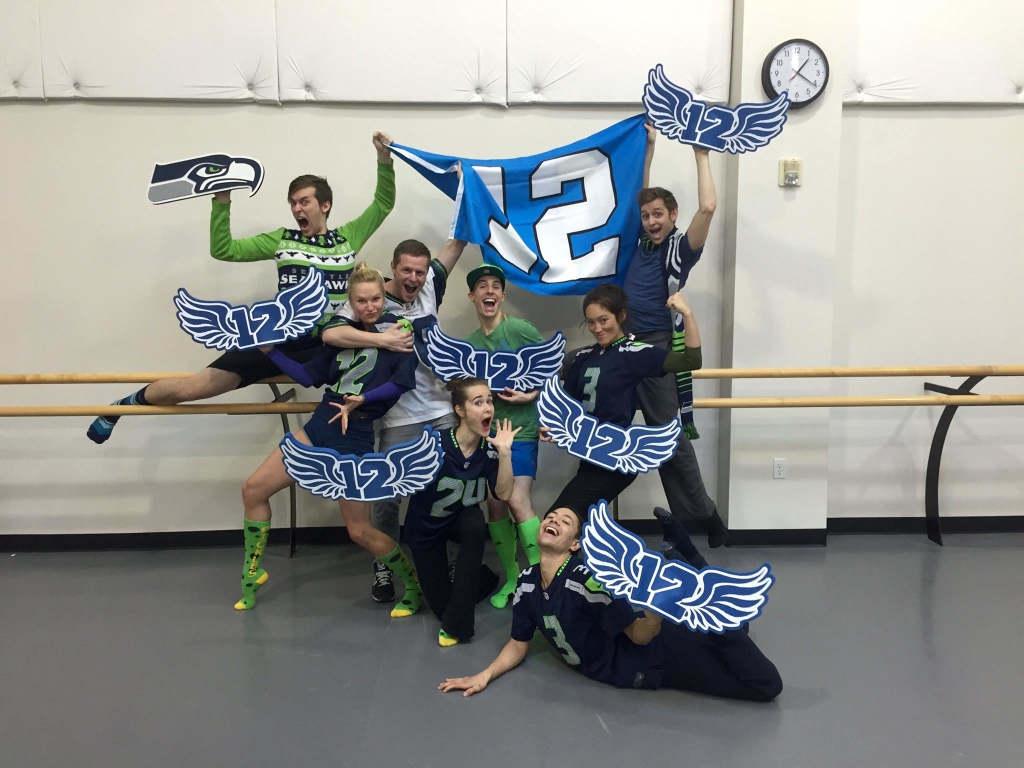