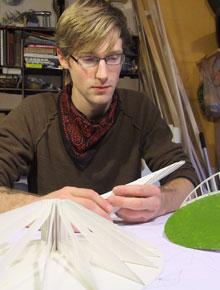 Casey Curran is a master of ingenuity, a prince of the imagination. His kinetic art takes the form of intricate sculptural mechanisms that resemble and fascinate like the marvels in a children’s fairy tale. For me, they recall the imagery used by British writer A.S. Byatt to describe fantastical Victorian puppetry and ceramics in her novel The Children’s Hour.

Casey’s tatooed left arm has bees on the shoulder, a bird below: the bird is a bee-eater. “Somewhat predatory,” he says with his sly/shy smile.

Customarily in his work, Casey combines objects found and those made, such as brass feathers meticulously copied one by one from the pelt of a real duck; fancifully recreated insects or animals (he is intrigued by horses as symbols of power tamed); or artificial flowers crafted of metal so cunningly that one is hardly astonished to see them bloom in one of his moving—in both senses—installations: Curran, BLIND SPOT

So it is a bit surprising to watch him work in something as mundane as … cardboard, on the set for Olivier Wever’s reimagined 3Seasons, slated for June 24-5 at Intiman Theatre as part of Whim W’Him’s reSet. 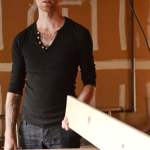 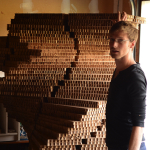 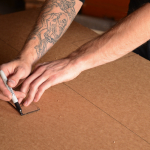 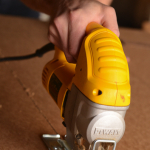 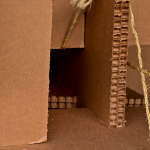 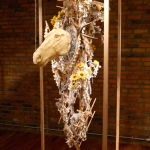 Yet Casey’s gift for uniting unlikely shapes, ideas and materials in ways that feel at once strange and natural will still be in evidence on stage.

His challenge is to create, on a larger scale than usual, a setting to complement and enhance this dance piece centered around the human impact of a society that is drowning in its own garbage, both literal and figurative. As Casey’s setting is being constructed after the choreographic fact, he says, “this is a different process” than it would be if the dance and its surroundings were brought into being together. “But I feel there is a common string between this and other things I’ve done.”

He has produced some larger pieces: A show at the Frye with the theater group Implied Violence involved a gold skeleton with 30-40 wings, sitting on a mass of black asphalt amid blooming flowers. And for an installation in Krems, Austria he made “a 30 ft. diameter claw that descends.” 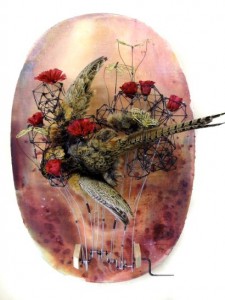 sculpture, “only a little thing, with bees, but it paid the rent.” The cardboard for the Whim W’Him show comes in large 40″ x 48″ rectangles with a honeycomb structure between two thin, smooth outer surfaces. It can be cut into intricate shapes, the top layer peeled away, or made into large structures put together by a slotting system (rather like Lincoln logs).

He works by repetition, cutting 100 pieces and observing how they fit together; doing one piece and then a variation and seeing what that metamorphoses into, in a way reminiscent of Philip Glass (or perhaps The 500 Hats of Bartholomew Cubbins…).

When I spoke with him last week, he said:
“Maybe I will use color, some spray paint, but I don’t want it to look too much like trash. I know the idea is that it’s castoffs.”
“Artful garbage?” I asked.
He laughed and assented.

One of the more intriguing aspects of Casey’s work is that after the show is over, his theatrical constructions (such as some headdresses for Implied Violence) often turn into pieces that can be viewed for their own sake, at closer quarters: “The project as an object, a sculpture in itself, in which you can see all the details and the other aspects of it, a distillation of the performance into an object. In the show you can see a context, a history, where it comes from. Performances are time-based, while art-work is static.”

Whether the set for 3Seasons will become a sculpture in its own right is unclear. It needs to be easily dismantled to allow it to tour with the company. In any case what its actual incarnation on the stage at Intiman will be, I can’t yet quite imagine. The garage where it’s currently being built isn’t big enough. It’s a work-in-progress that can only be fully realized on the spot in the days to come…