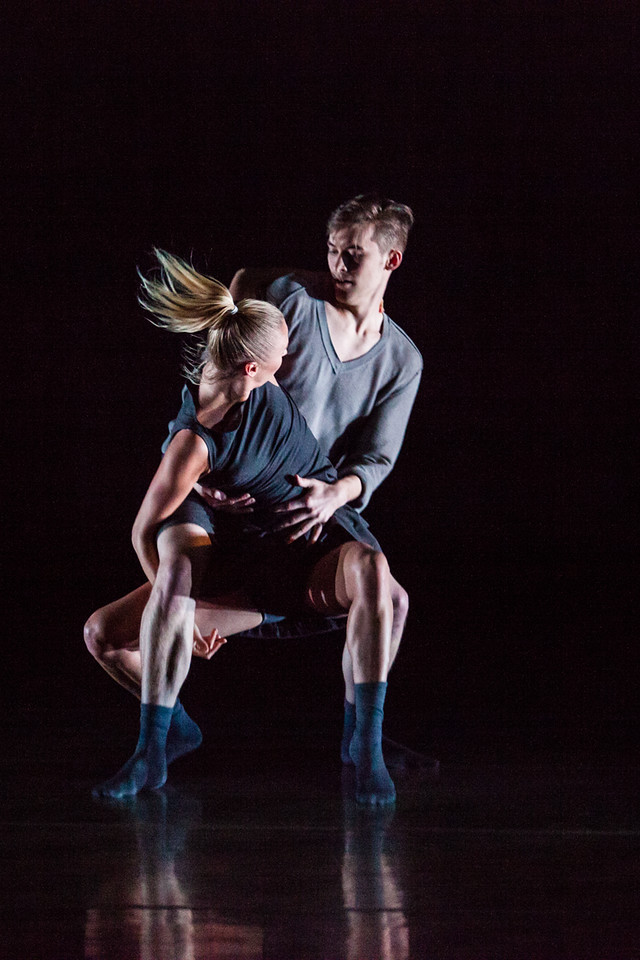 First on the THREEFOLD program last weekend at Cornish Playhouse was Whim W’Him artistic director Olivier Wevers’s We Are Not the Same. Called by at least two reviewers his most sophisticated work to date, it is a multi-leveled commentary on love. 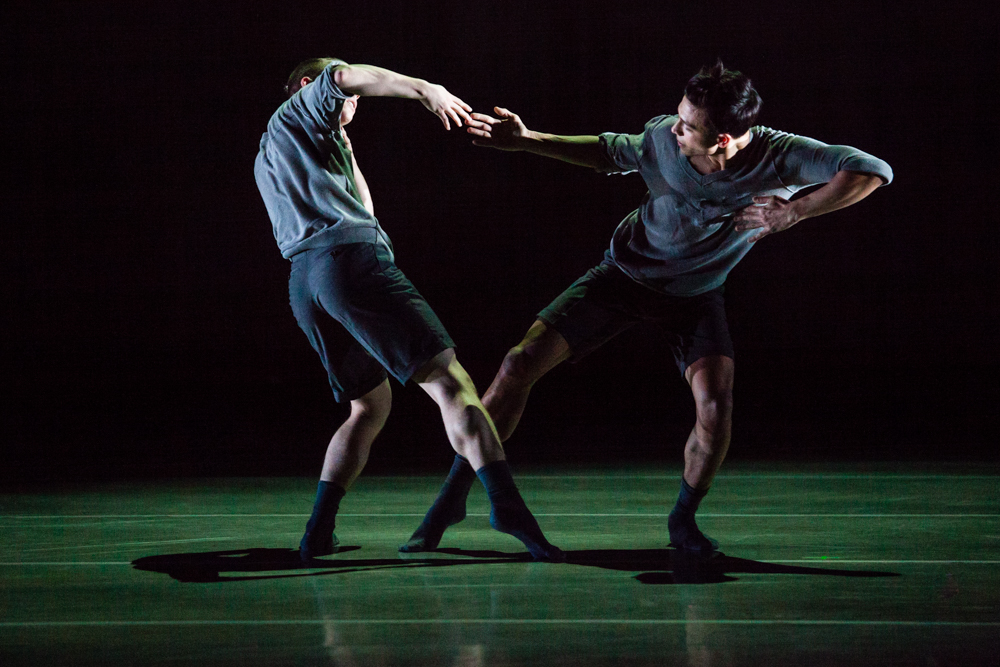 By featuring two couples (Tory Peil/Kyle Matthew Johnson and Justin/Jim Kent)—who sometimes dance in near unison pairs, sometimes quite in their own worlds— Olivier seems to make the case that each human relationship is unique because it feels so to those involved. 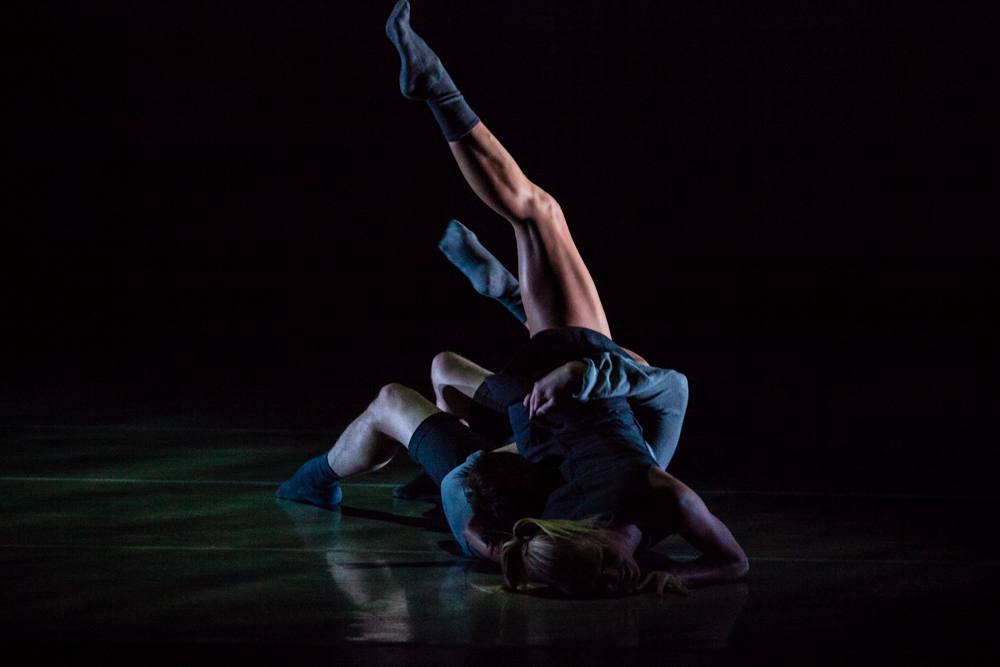 Our ways of embracing each other are related (we all are human beings) and distinct (some of us are men, some women, and anatomy may not be destiny but it surely affects one’s fate). 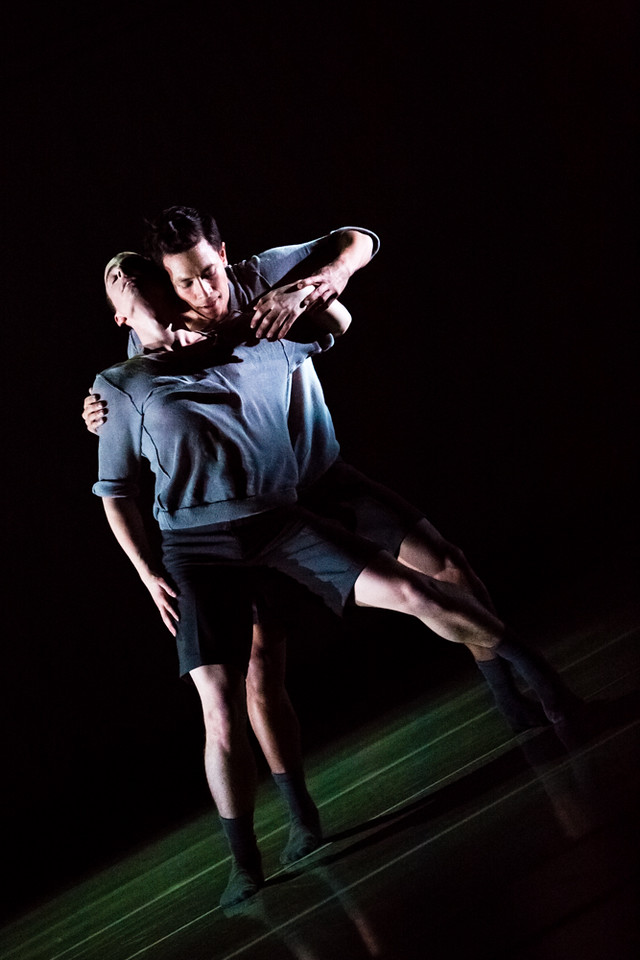 But finally we are reminded that each of us is separate, not any other, as the dancers stand in a ragged row, four irreducible individuals, and then peel off one by one in different directions. 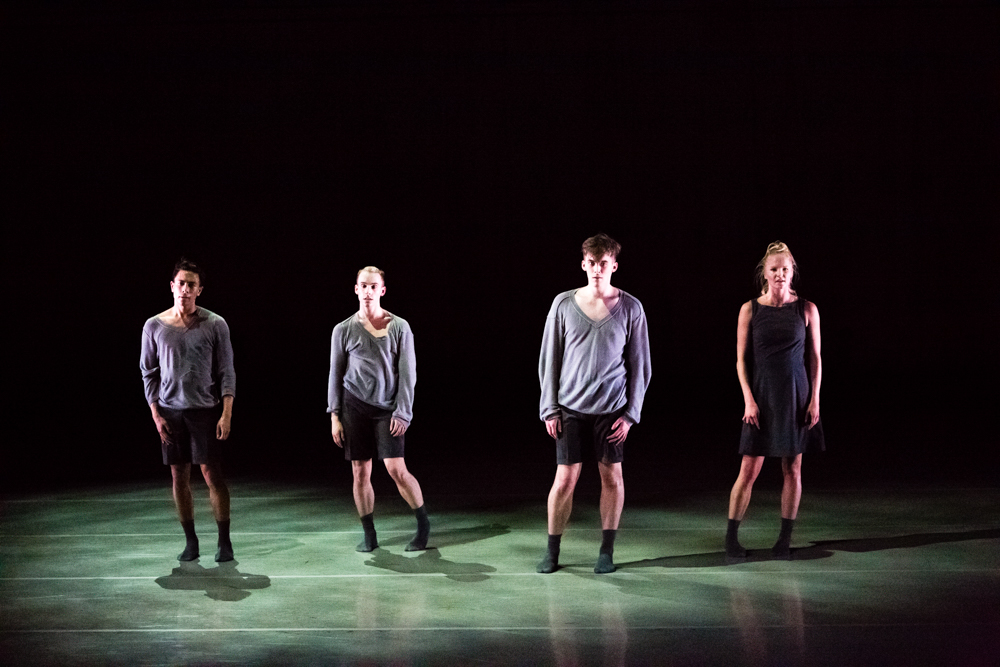 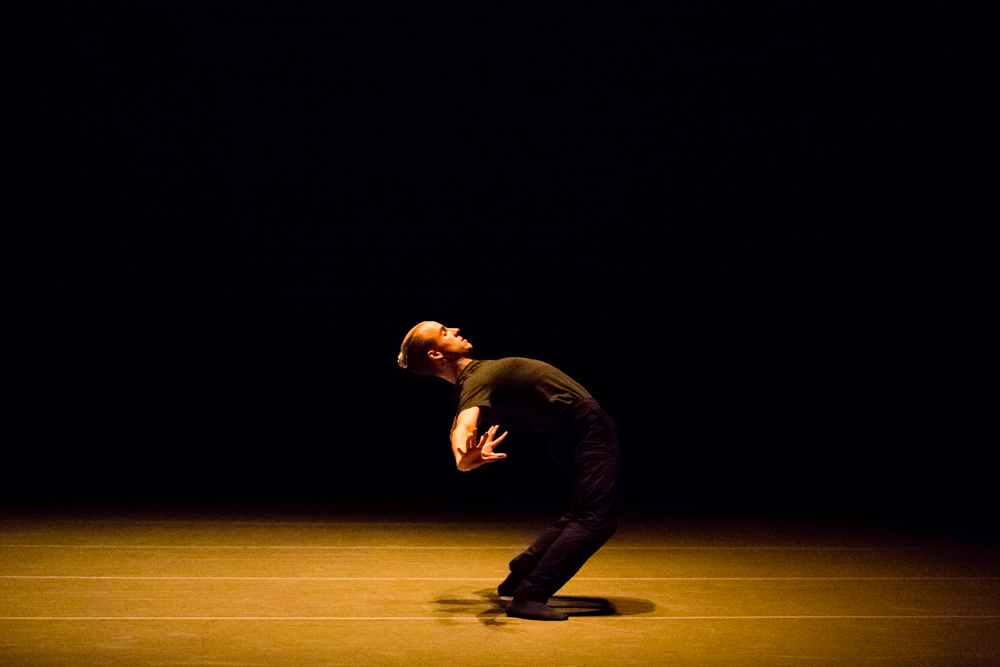 Justin Reiter, alone onstage at the start of new year new you by guest choreographer Loni Landon, seems to be longing for something or needing someone.

In a series of enigmatic interactions with Jim Kent, there is tenderness, tension—and interruption on the part of Mia Monteabaro, who cuts across their line of vision or circles the two warily, face impassive, and joins in a sort of tug-of-war with Jim over Justin. 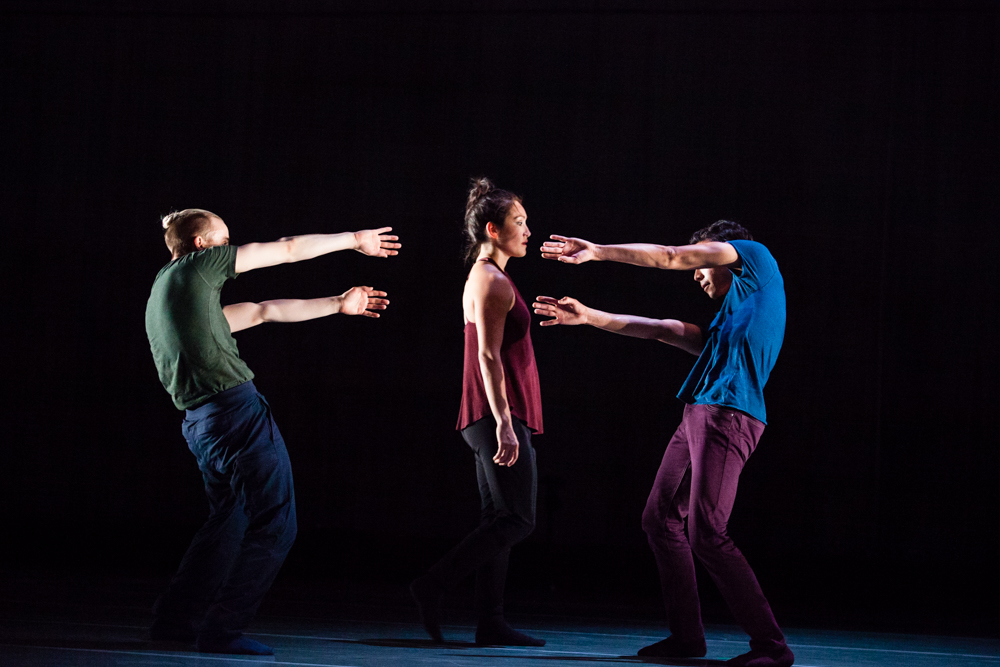 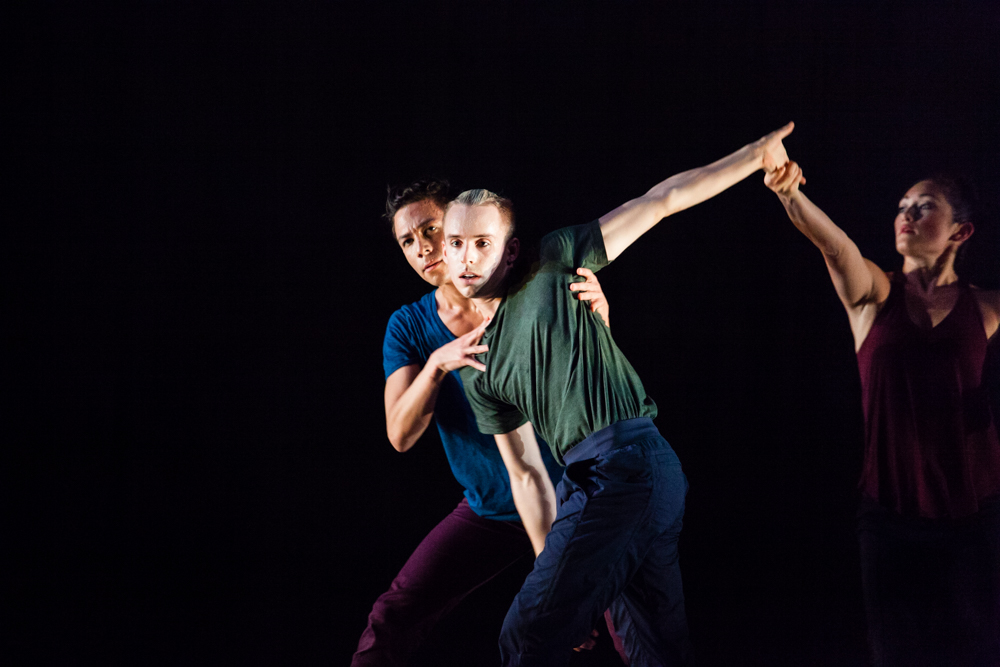 But ultimately both she and Jim fade away, leaving Justin by himself once more, facing an unknown new year in a burst of glittering gold confetti. 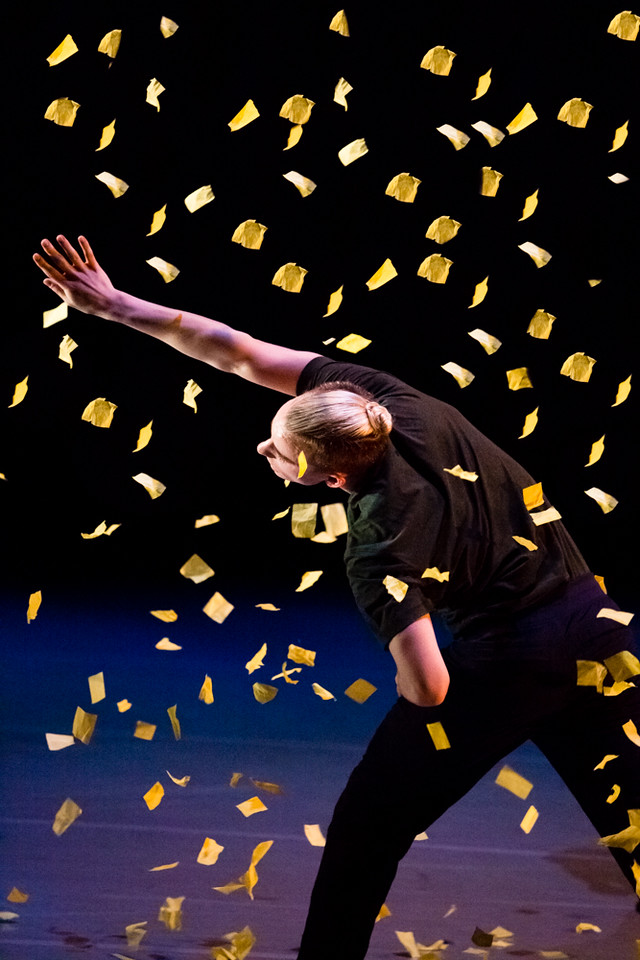 In Penny Saunders‘s Blue Soir, still and waiting images from Edward Hopper‘s paintings are transformed by all seven Whim W’Him dancers into images invoking the scenes he depicts, moving in both senses of the word. A young couple (Thomas Phelan and Tory) flirt, but indirectly, separated by a window and ambivalence or insecurity.

A solitary woman (Mia) dances out her loneliness… 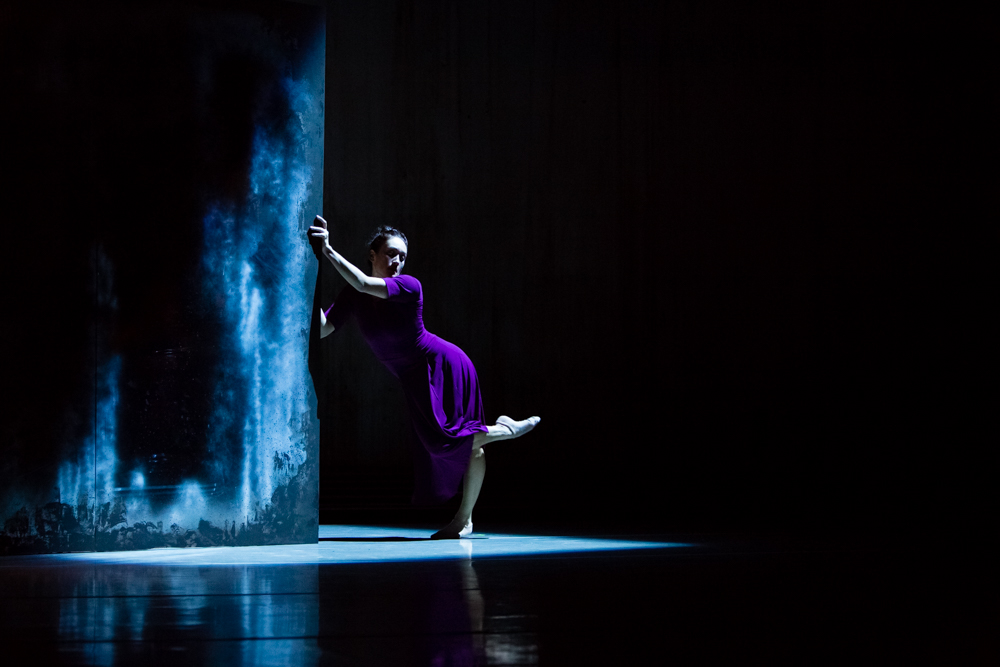 …while a female trio, dancing together but unaware of each other conjures all the brooding lack of human connection at the core of so many of Hopper’s works.

Throughout the piece threaded the relationship between Hopper (Kyle) and his wife Jo (Lara Seefeldt). Even in their closest interactions—he holds her, faced away in a slow tilt; she looks back at him while borne off by a roiling mass of others—seem haunted by the same kind of longing that pervades the atmosphere of his paintings.