“I saw La Bayadère and fell in love with ballet again,” Olivier Wevers, Whim W’Him‘s artistic director, told me on Skype a couple of weeks ago from the Czech Republic.
He  spent most of June there, teaching his piece The Sofa to the Ballet company of the National Theatre Brno (Národní divadlo Brno). “From the main principals to the last row of the corps,” he said, “they were real ballerinas.” Watching rehearsal, he was struck by the attention to every detail of fingers, bouréeing feet, angle of head for each dancer. “Their acting, even in rehearsal, was like a show,” he added, “gorgeous, even though it was 90° in the studio with no air conditioning.”

Set to Mozart‘s Piano Concerto #9 in E-flat major, K. 27, The Sofa premiered in 2012 at Grand Rapids Ballet Company, whose director, renowned and much beloved former Pacific Northwest Ballet principal dancer Patricia Barker, has close ties with the Czech National Theatre in Brno. Whim W’Him did the second staging in 2013, with the principal roles danced by Yuka Oba and Nicholas Schultz of GRB. 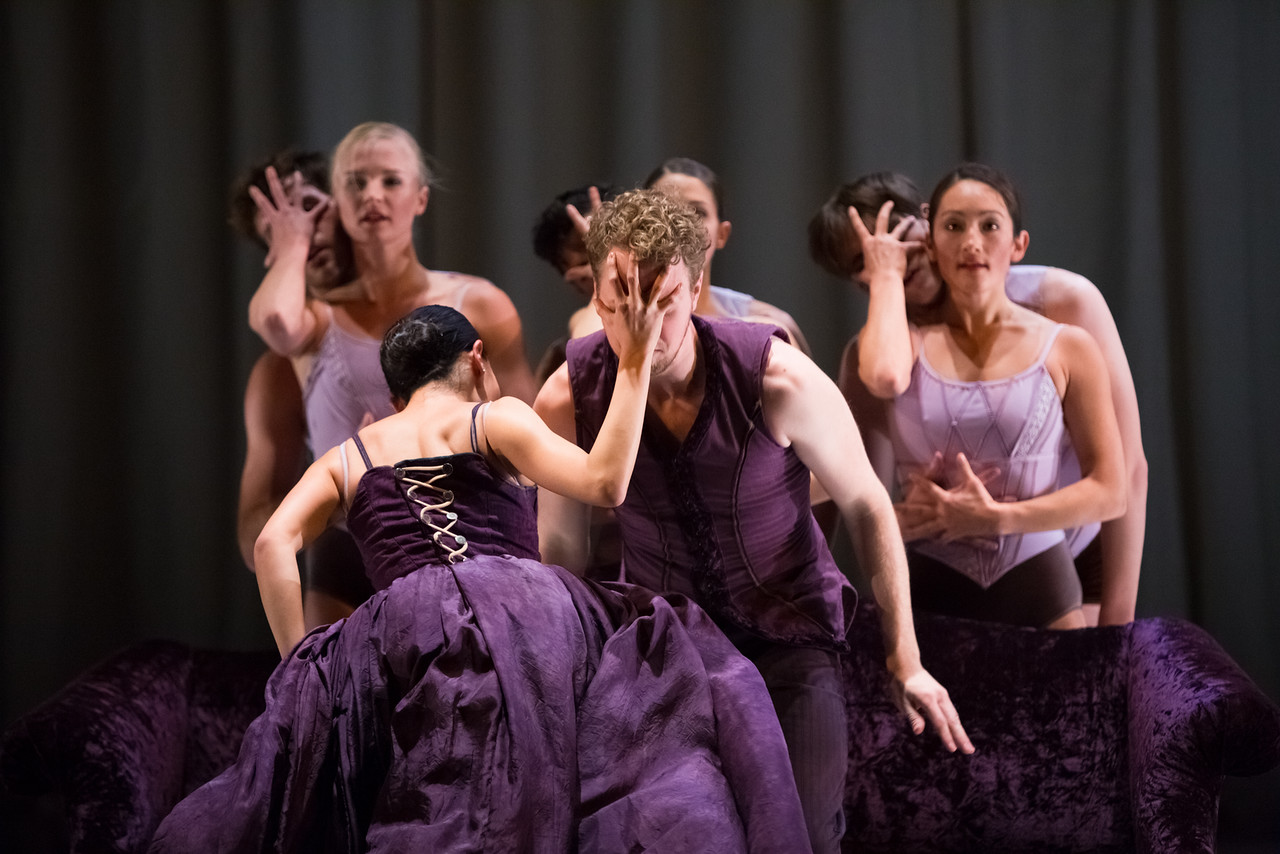 Olivier also fell in love with the town of Brno itself. The Czech Republic’s second largest city, with some 300,000 inhabitants, is home to many friendly people—and amazingly reasonable prices. “Everyone is so sweet, kind, and responsive,” Olivier said. “The city is so beautiful too. There is still an old tramway with bells… 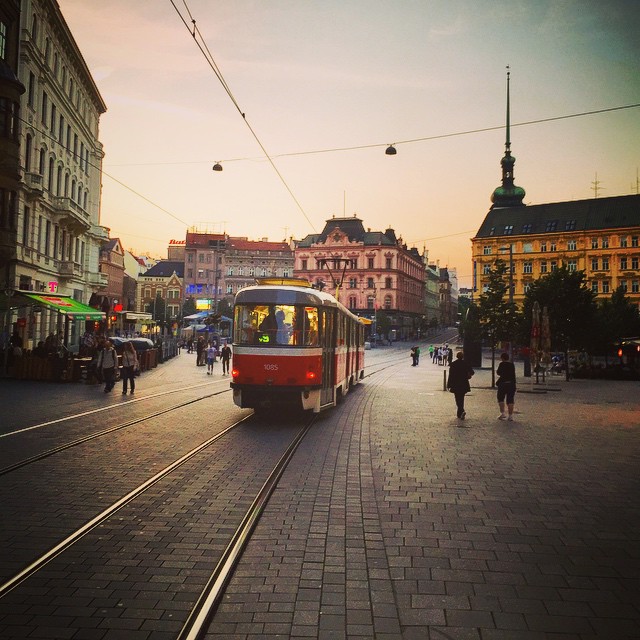 “lots of color on the buildings… 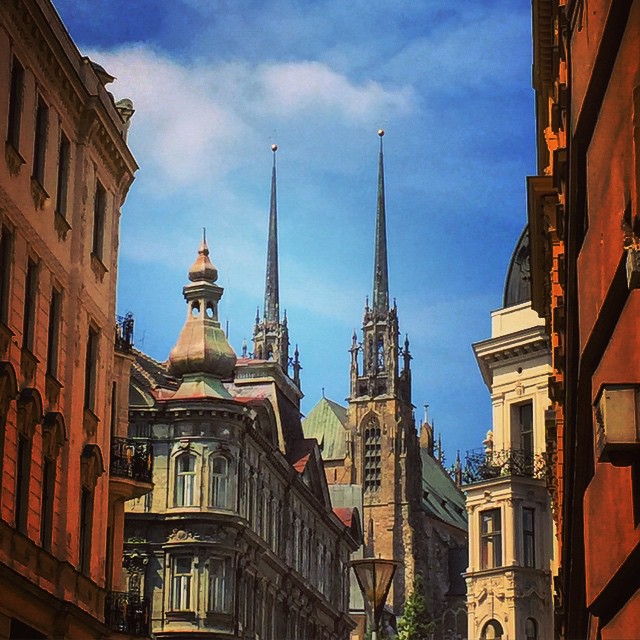 “…and everybody walks. Hundreds of people.” His apartment was a 4th floor walk-up.    Each morning—joined half-way through the month by Whim W’Him dancer and stager-in-training Tory Peil—began at Café Placzek, just up the street from where they were staying. A delicious breakfast of bacon, eggs, fruit salad and whimsical lattes cost under $4. “I always left a big tip,” says Olivier. 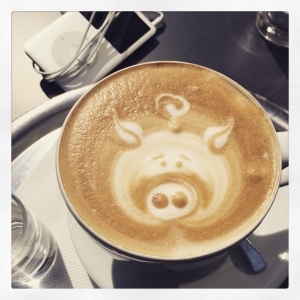 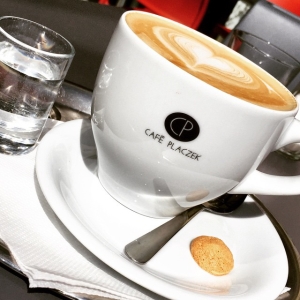 “The waiters knew we’d arrive every morning and knew exactly what our orders would be.” Tory adds, and it didn’t hurt that the wait staff were handsome too, she also reports. “The town of Brno treated us so well. Olivier and I spent afternoons exploring, looking at the beautiful architecture and having quaint meals at all the outdoor restaurants.” 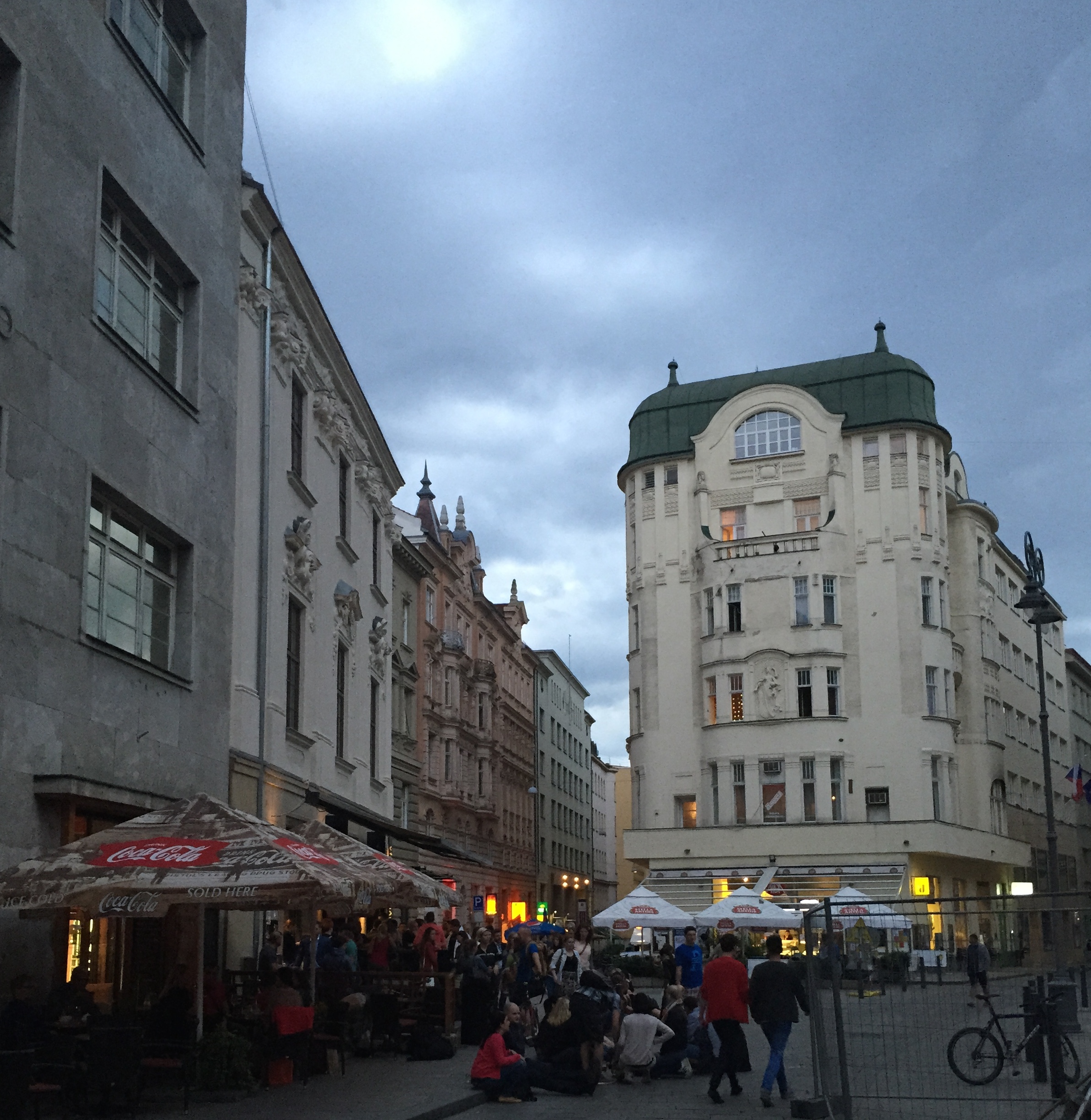 The Brno ballet is a big company with 47 dancers, ample studios, and various programs being rehearsed at any one time. Performances are held in three different theaters.        The oldest, the Reduta Theatre (much of it decimated by fire long ago and largely rebuilt) dates back to well before 1767 when the 11-year old Mozart and his sister Nannerl performed there. Its tiny hall holds only about 250 spectators. Olivier was in awe when he was shown into a locked room that still remains as it was in Mozart’s day. 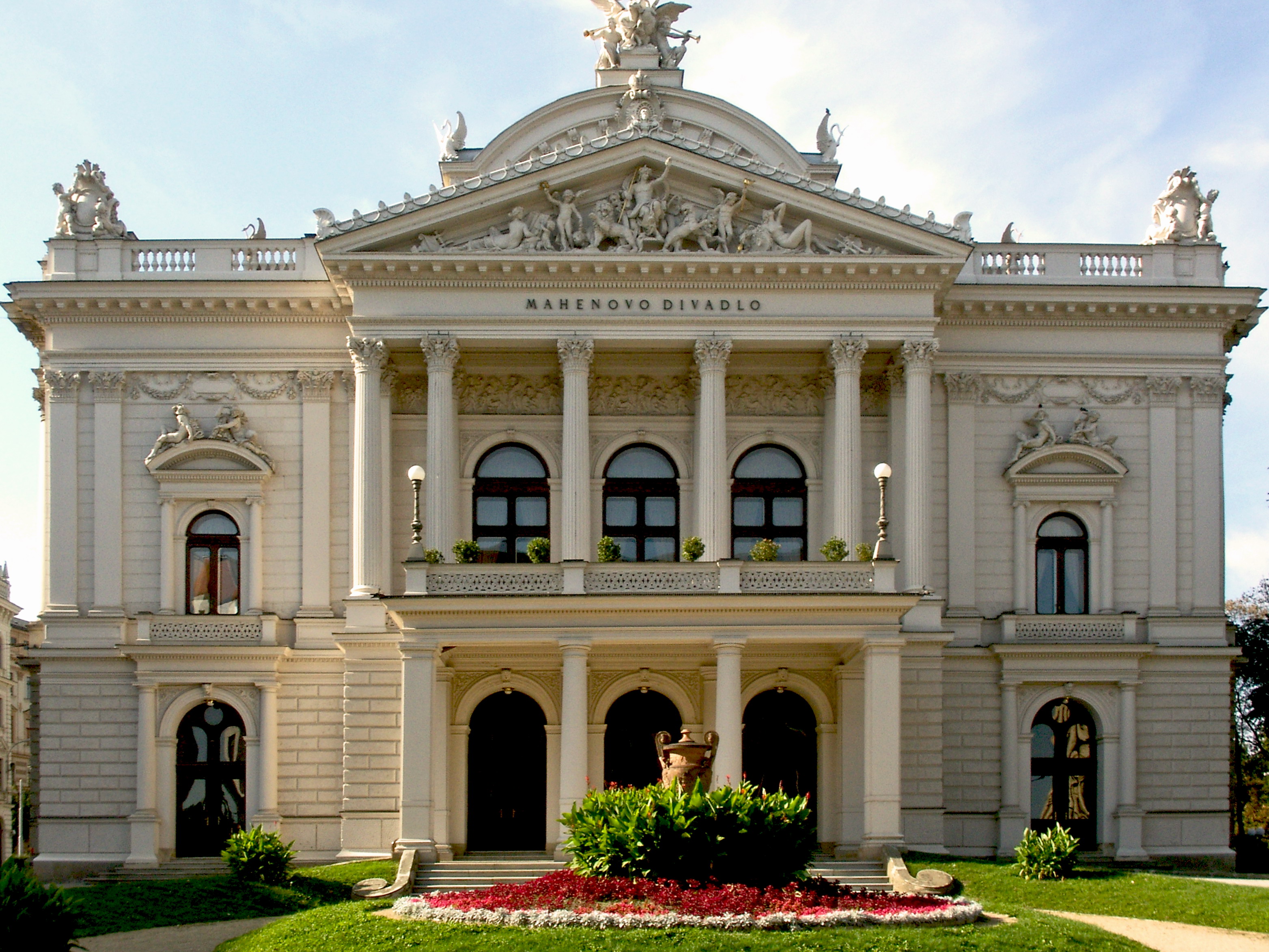 The second, the Mahen Theatre, built in the 1880s, was one of the first public buildings in the world lit entirely by electric light. Five of Czech composer Leoš Janáček‘s late operas were premiered there. The biggest and newest of the three, the Janáček Theatre, opened in the 1960s and is where The Sofa will be performed, starting on October 29. Olivier will return to rehearse with the company for the two weeks prior.

Soon after Olivier’s arrival in Brno, the search was on for an appropriate piece of furniture to play the title role. Once a suitable sofa was located, it needed structural modifications to make it strong enough to be lifted high in the air, turned upside down, jumped upon and otherwise abused. 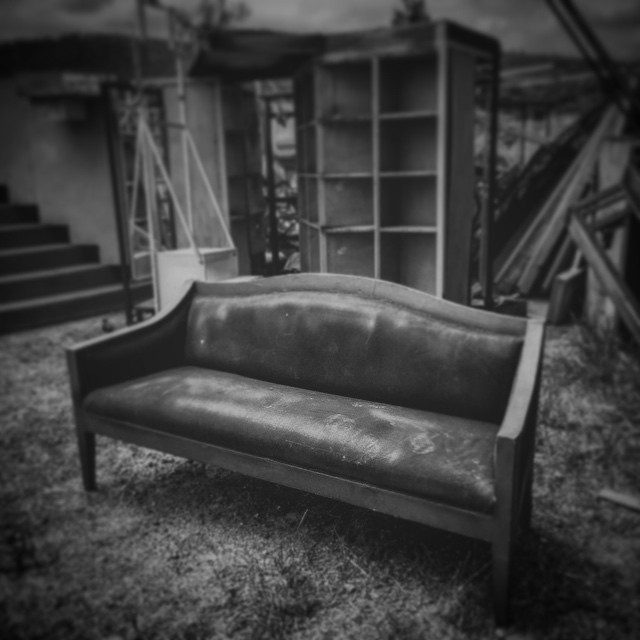 Because there is a busy scene shop with some 50 employees, the work was completed in two days, and the sofa re-emerged  with a new persona and ready to rehearse. 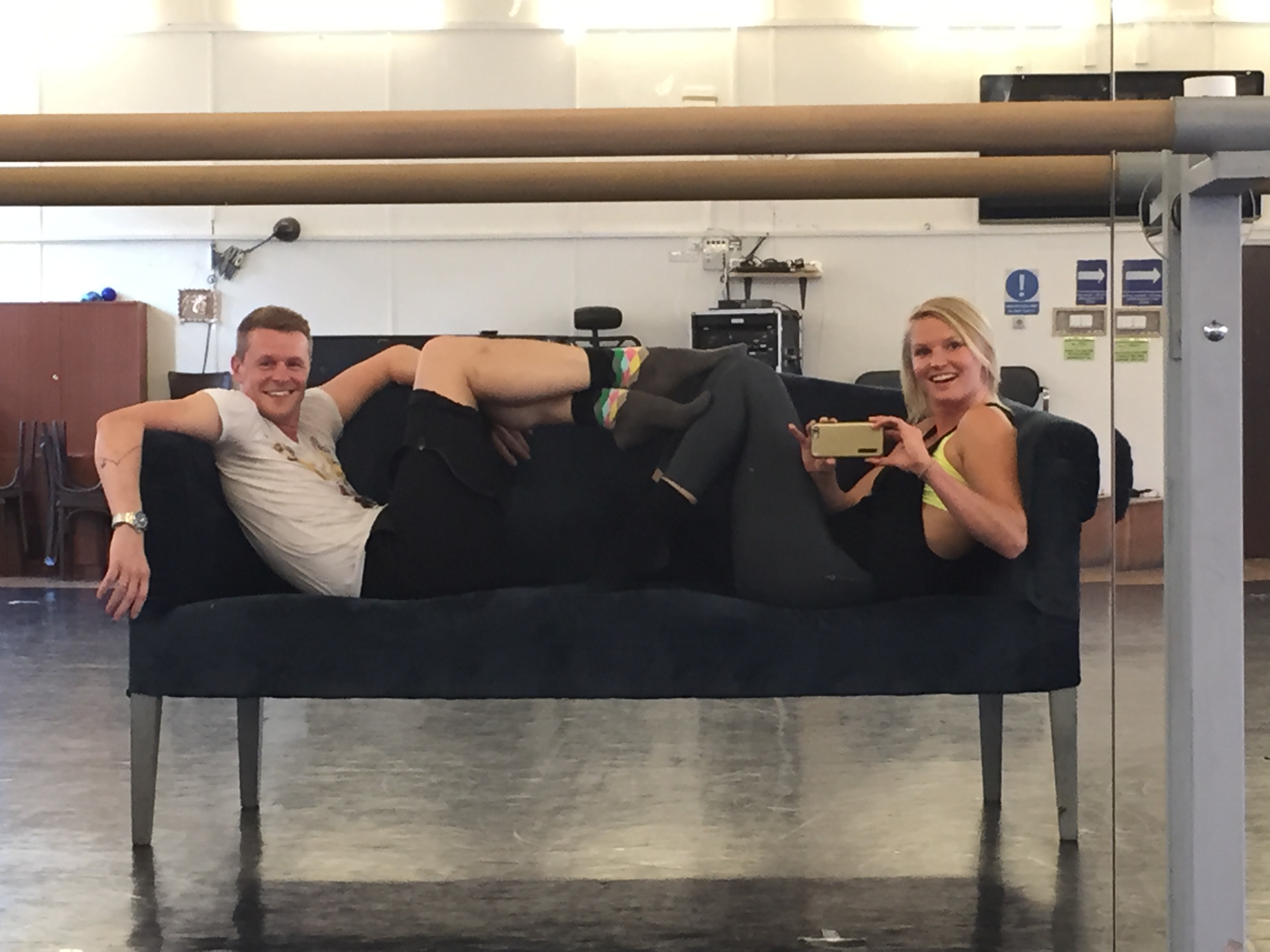 Its final rich purple covering will be constructed with fabric from the same manufacturer as those for Grand Rapids and Seattle. So now three ballet companies will possess purple velvet sofas.

An equally big and skilled costume shop is building the costumes. After much discussion of exact shades of purple, it was decided that some of the fitted stretch velvet to be used will also come from the same U.S. sources as the earlier production, while the marvelous  Habutai silk of the lead woman’s dress will be dyed and painted by GRB’s Melissa Leitch, who designed and colored the original fabric. 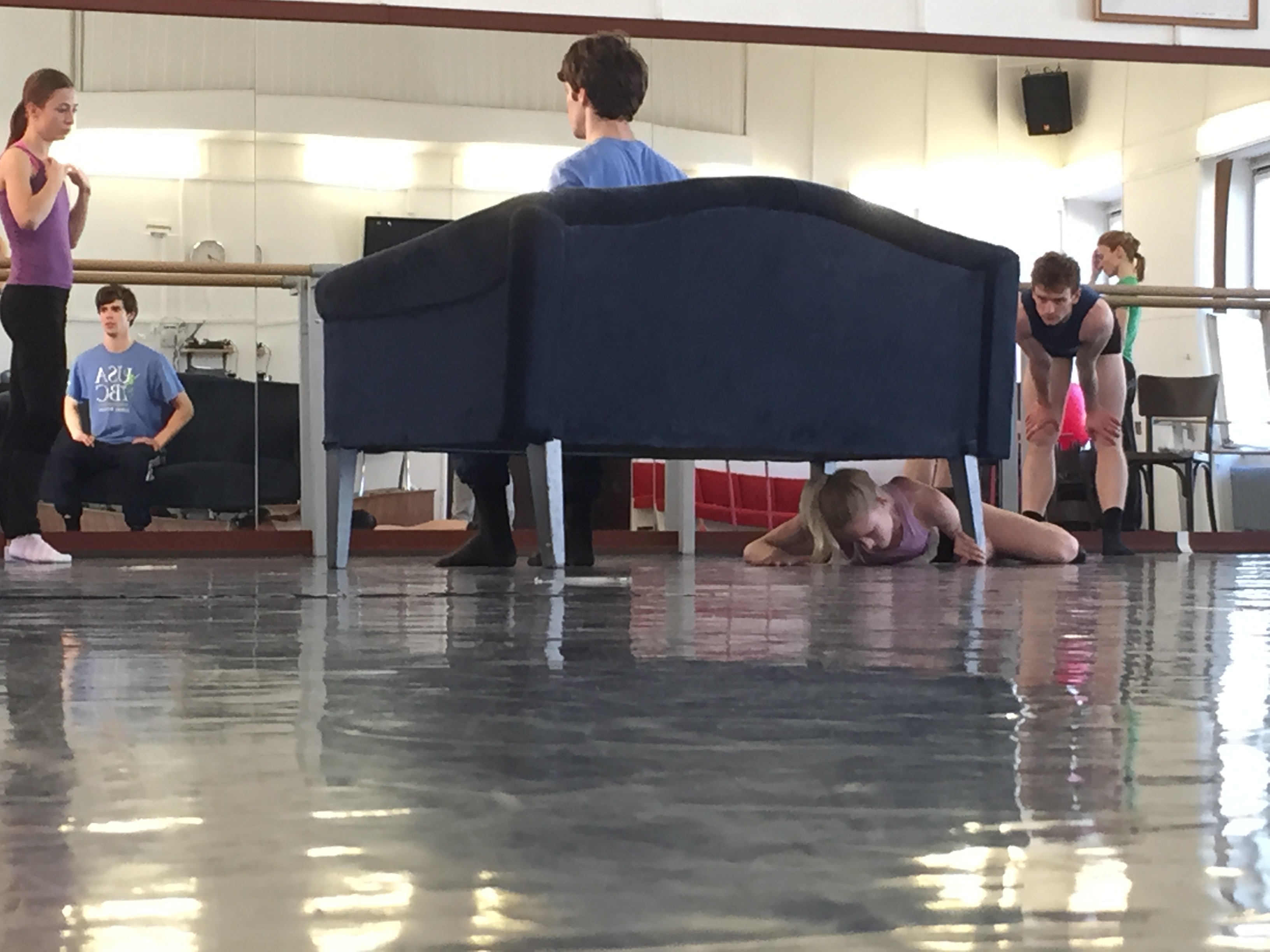 But most of all, in their time at the National Theatre, Olivier and Tory were impressed by the dancers and their enthusiasm for the work. Though his choreography, with its tilts and off-balanced movement, its turn-ins instead of turnouts, was easier for some dancers to take on board than others, they all worked so hard it was difficult even to get them to take five minute breaks. Says Tory, “It was incredibly inspiring and reinvigorating to work with dancers that take their careers so seriously. They spend almost all day in the studio, 6 days a week.” And also perform in the evenings. 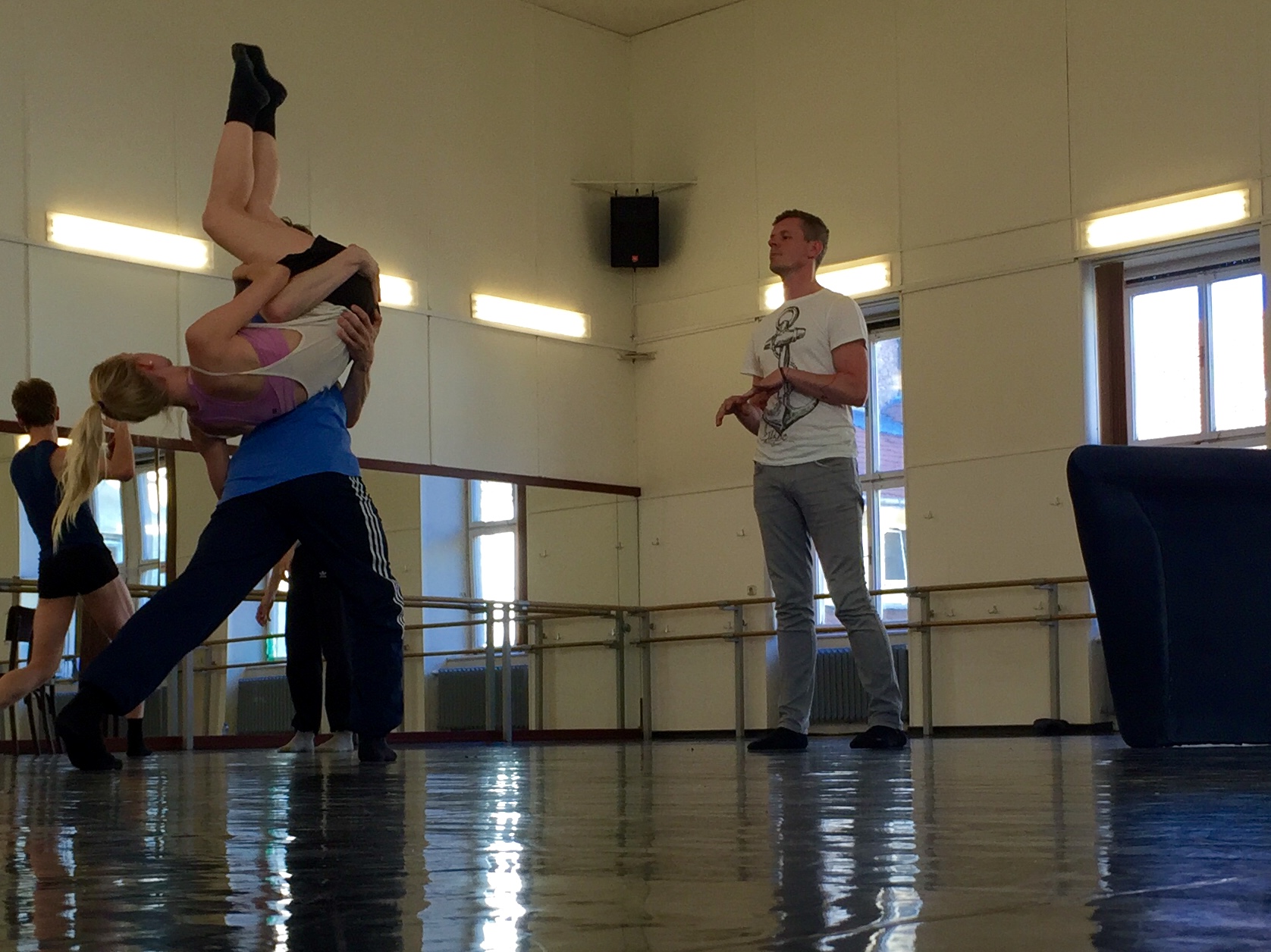 “When they’re not called to rehearsal they’re doing foot exercises or stretching or running variations on their own,” she continues. “It was a good reminder that this career is a short gift and should be lived really fully while we get the chance. They also were so passionate about learning Olivier’s work. I take for granted how fun his work can be but also how difficult it is. Rehearsing the main couple for the huge pas de deux was really gratifying. That pas is really hard but they wanted to learn and wanted to do it so well. They brought passion to every rehearsal.” 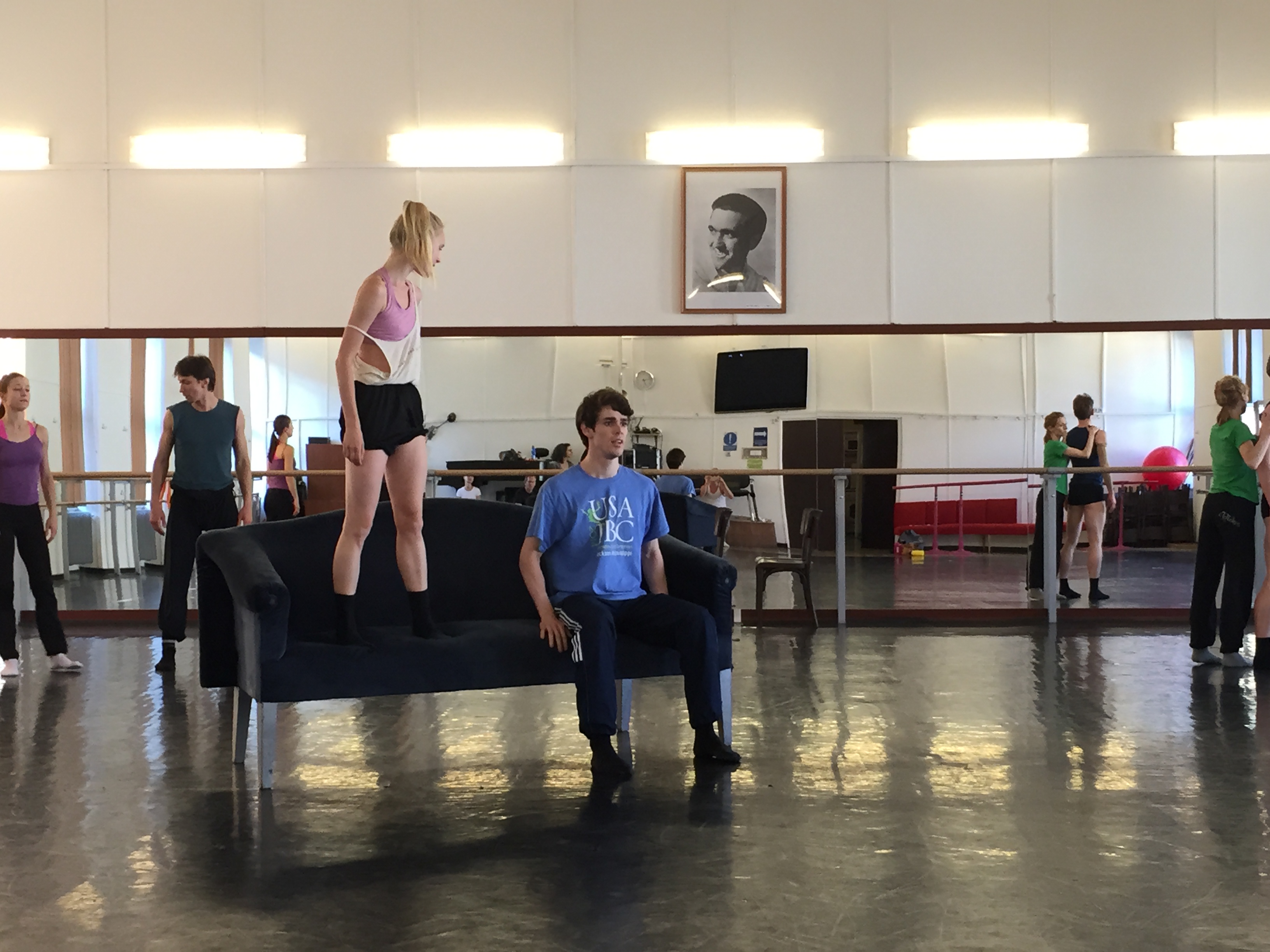 Olivier tells the dancers in each of the several casts, “Bring your own story to it,” and from his descriptions there is a wealth of possible stories. In one of the lead couples, the two dancers are from Byelorus and from Russia, “very peppery,” says Olivier, “they have a great relationship, hot tempers.” A second pair is comprised of “a Swedish blond  girl and a French guy, both young and lovey-dovey,” while a third is a very young, new dancer “with a Prince look” and a “stunning” ballerina “with a low gaze and melancholic look.” 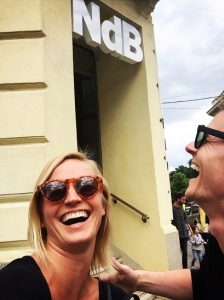 In addition, a ballet mistress and a ballet master, former principal dancers, have also learned the parts, “almost like another cast.” Because of the dancers’ busy schedules, it is extremely helpful to have the ballet masters sitting by and taking notes, ready to find the right place in the music for repeating sections during rehearsal. As Olivier said, instead of having to fuss with the computer, he could concentrate fully on working with the dancers. Having Tory on hand as well was invaluable, not just from the point of view of efficiency, but because “she gets my work” and knew how to help the dancers learn nuances of style and interpretation. Olivier and Tory could split up jobs, working with different groups, and discuss casting. “I got a lot more accomplished than I could on my own,” he concluded. “I got totally spoiled.”

“All in all,”says Tory, “it was an incredible experience I felt so lucky to have. I hope we take The Sofa all over the world! It is a perfect piece to encapsulate Olivier’s sense of play and whimsy while also using these dancers fierce technique and work ethic. A sofa in every country maybe?!”