multiplicity of meaning – impressions of SENSATION

At the end last weekend, which had included two Whim W’Him shows and the final performance-cum-hootenanny of Seattle Rep’s Woody Sez, I came out of the theater amazed, bewildered, scared and touched to the core by this country’s enormity (in both senses of the word) and by the multiplicity of meaning* spun by the human mind. “We, the people”—celebrated in the songs that rouse and inspire present-day Seattle audiences as they did Woody Guthrie’s in the 1930s—are the much same folks who today trumpet the most vociferous praise for the new president.

Since that moment Sunday afternoon, I’ve been even more aware than usual of the astonishing variety of opinion and evidence that can be adduced in support of every possible interpretation of political, social, economic—& artistic— phenomena. 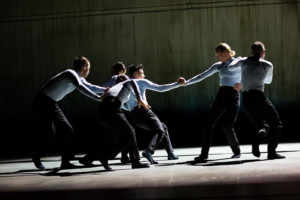 “It was January 20, 2017,” wrote Philippa Myler for Seattle Dances. “While the mood on the streets may have been somber, inside the packed Cornish Playhouse, there was an air of delighted anticipation as the crowd of ‘Whimmers’ took their seats in the audience for Whim W’him’s latest show, SENSATION.”

Critical and audience response to the program was highly enthusiastic. Chris Heide, in Chosen Magazine called Penny Saunders’s play-by-play, an idea personified a “masterful study of the fruition of a new idea”; Larry Keigwin’s Line Dance “a subtly genius piece of choreography”; and Whim W’Him artistic director Olivier Wevers‘s Catch and Release, “undoubtedly the masterpiece of Sensation,” adding that the latter “encapsulates Whim W’Him at its best.” In the PI, Alice Kaderlin wrote, “For a company artistic director, the trick is finding gifted choreographers who can stretch the troupe’s dancers and provide a satisfying experience for audiences. With Whim W’Him’s current program, founder Olivier Wevers demonstrates once again that he has the capacity to do this.” And Michael Upchurch of the Seattle Times pronounced “The whole evening is Whim W’Him at its very best.’

There was much less agreement, though, on which work or section was the most compelling, the meaning of each piece, or any common theme. 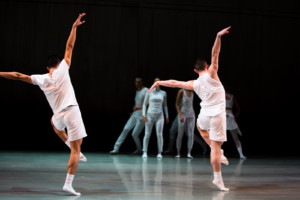 For Alice Kaderlin, “Sensation offers three very different works with a through line that, although probably not intended, makes for a particularly engaging evening of dance.” Whim W’Him Explores Relationships in Latest Outing was the headline of  her review. “All three works deal, in one way or another,” she said, “with relationships.” 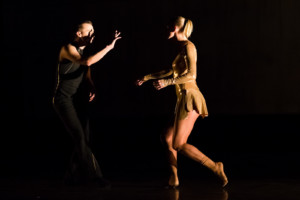 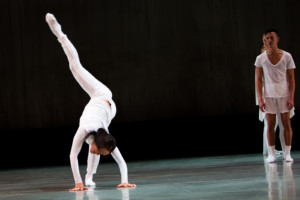 Other reviewers agreed about there being a ‘through line,’ but had different opinions on what it is. For Michael Upchurch “the wisdom of crowds” was the central theme. “Isolation from the crowd. Acceptance by the crowd. Abandonment by the crowd.” Chris Heide concurred: “Whim W’Him presents three works that once again delve into a deep analysis of the human psyche. All three pieces are a clever study of crowd dynamics. As always, Whim W’Him presents a show that is deeply reflective of current events, tackling themes such as isolation, acceptance, and loss.” 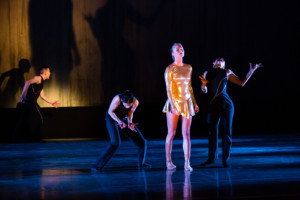 Marcie Sillman saw the evening from a somewhat different angle. Her review, on her And another thing. . . blog, began with a quote from a friend: “Art is What Makes Us Human,” and went on to say, “Indeed, the three dances on the Sensation bill were meant to open windows into universal human experiences.” 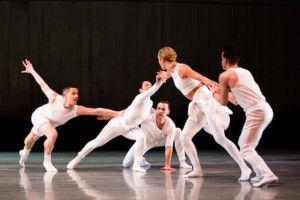 A fine example of diversity of opinion (as well as of the potential of two dancers on the stage) is demonstrated by reviewer comments about the duet (riveting, in my opinion) between Grace and Doubt in play-by-play. Philippa Myer, writing for Seattle Dances, finds that the duet “failed to add further context to the abstracted thematic elements of the piece. Although their technique was faultless and each dancer displayed near superhuman flexibility, their connection relied on the physics of their bodies and had an absence of emotional depth. Instead, the work’s dynamic shifts and emotional content were driven by evocative music featuring the cello by composers Dvořák, Nick Cave & Warren Ellis, and Mozart.” 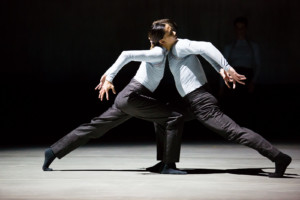 Marcie Sillman, however, has this to say: “Nestled in the middle of

[Justin] Reiter‘s journey [as The Idea] from inspiration to realization is the remarkable pas de deux for Doubt, danced by Patrick Kilbane, and Grace, personified by Liane Aung. They meet center stage, bodies inclined toward one and another from the waist, their arms raised at shoulder height behind them, elbows bent and fingers splayed. Their heads rest in the curve of one another’s necks, tender yet tentative. Kilbane and Aung proceed to wind around each other like pliant strands of silk. 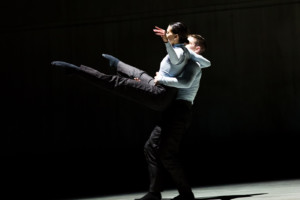 “Aung defies gravity as Kilbane lifts her into the air then gently pulls her across his torso. These two dancers are perfectly in synch with one another and with the music. They must have been conscious of the audience, but for the too-short duration of this duet, it felt as if they danced only for themselves. It was a rare and, for me, very necessary reminder of the power of art to lift the human spirit.” 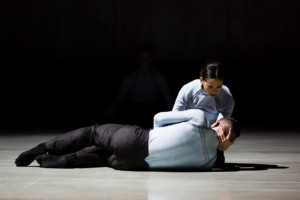 Sillman concludes: “This past month I’ve pondered the role of the arts in the new political landscape. Artists can stand up to protest, to create work that comments directly on social injustice and inequity. But they can also give us moments like Penny Saunders’s pas de deux; moments that make us shiver at the ineffable beauty of the human spirit.”

So which comment is the most discerning? Which is right? Is there a ‘right’?
It’s a very complicated business, to maintain standards of excellence in art, while acknowledging and in fact welcoming multiplicity of meaning…*

*I first heard the term from a teacher of fiction-writing a decade or so ago, and more recently discovered to my delight that it is the title of a manuscript-in-progress by David Chalmers, the brilliant Australian philosopher of mind/consciousness. Whatever its origins and uses, “multiplicity of meaning” is a beautiful turn of phrase, at once clear and full of the subtlety and ambiguity of what it describes. 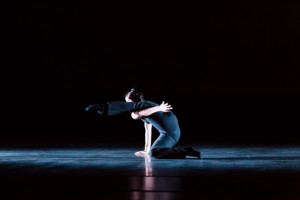 Next up: Dancers and choreographers talking—responses to audience questions