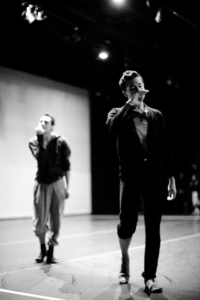 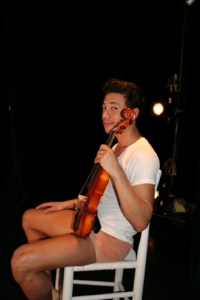 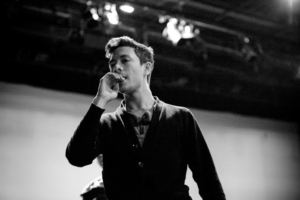 Whim W’Him’s 3Seasons is an unusual experience for Jim. He generally collaborates with a choreographer or company, such as Scott/Powell Performance, to develop a piece gradually over months, whereas this work is, for scheduling reasons, being created in bursts of intense concentration for many hours at a time on a relatively small number of days. 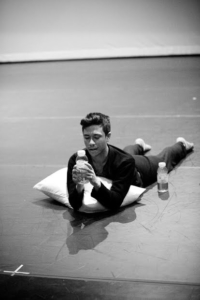 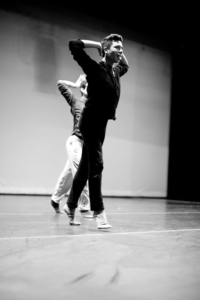 Jim enjoys interacting with new dancers he may have seen perform, but has never worked with before. Seeing them not on stage, but in a rehearsal hall “in nothing but booty shorts,” gives you a different perspective. The company of dancers that is creating WhimW’Him has a joyful dynamic says Jim, despite the different styles and backgrounds. Like other dancers he was a little nervous at the beginning, but they have forged a strong and cohesive group.
Jim loves learning new choreography, having new material to chew on. He is good at mimicking—”a natural sponge”… …usually, that is. But when working with someone new like Olivier, it always takes a while “to grasp what is desired.” Past projects of Jim’s have had the luxury of process and time. “In this case, I’ve had to amp up my listening and observation strategies ” to work in the shorter time frame.
“I don’t want to sound like it was just easy and I picked it up like nothing. It was definitely new and foreign. I enjoy that part of learning new things. It’s different, it’s the challenging. And there’s the draw.”In a group, Jim can be reticent—seeming quite serious, restrained, even shy. In younger years it might have bothered him, being in a way, the odd man out. But on the rehearsal floor he leads off with assurance and pizazz, and can project a quirky off-beat sensibility or terrific earnest, deadpan humor…
The first photo, by Marc von Borstel, was found on