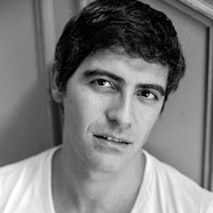 Bruno was born in Lisbon. At 13 he was accepted by audition into the National Conservatory in Portugal in dance. After graduating, he trained on scholarship at the prestigious Vaganova Ballet Academy in Saint Petersburg, Russia, until 1996, when he was offered a contract with the National Ballet of Portugal, quickly becoming a soloist. In 2001 he joined the Royal Ballet of Flanders in Antwerp, and from 2004 to 2016 was a first soloist with Les Ballets de Monte Carlo. During his dancing career, he performed works of celebrated choreographers and worked directly with many of them. Since 2007, when his first creation, Ai Que Vida, was made for a young choreographers evening at Les Ballets de Monte-Carlo, his numerous pieces for the company have met with much success. Bruno has also been responsible since 2015 for the choreography, staging and artistic direction of a pedagogical project , supported by the Ballets de Monte Carlo and the Monegasque Ministry of Culture, involving 100 plus children from Monaco primary schools in acting, singing and dancing, giving them the opportunity to experience the demands of creating and performing live in a professional setting.