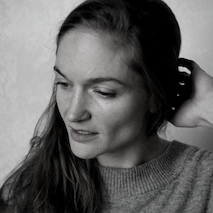 A Nashville native, Banning received her BFA in dance from The Juilliard School in 2002 and spent the first 8 years of her career working internationally. During her tenure with Aszure Barton and Artists, from 2003-2010, she was a soloist, master class teacher, and rehearsal assistant. In 2007, she joined Rumpus Room Dance, based in Portland, Oregon and Göteborg, Sweden, co-creating and performing multiple site-specific dance works. She and her Rumpus Room colleagues were nominated one of Dance Magazine’s “25 to Watch” in 2010. That year, Banning also returned to Nashville and in 2012 founded New Dialect, a contemporary dance  company which explores a wide variety of groundbreaking movement vocabularies. In 2014, New Dialect was named Nashville’s Best New Dance Company, and Banning herself received the Tennessee Dance Association’s Margaret Martin Award for outstanding contributions to furthering the public image and accessibility of dance in Tennessee. In 2015, she won Northwest Dance Project’s Pretty Creative choreographic competition and was selected as an e-choreographer for Springboard Danse Montreal. Banning was nominated in 2016 for the United States Artist Fellowship and received the Tennessee Arts Commission’s Individual Artist Fellowship for choreography.