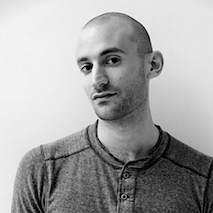 Adam started his career as a young actor, performing professionally on Broadway and in film and television before receiving dance training at La Guardia High School for Music & Art and Performing Arts, followed by The Julliard School dance department. He has performed works of many renowned choreographers and worked with Sylvain Émard Danse in Montreal, as well as with The Margie Gillis Dance Foundation. His own creations have been presented at numerous prestigious US venues and in Latin America. Based in Brooklyn, Adam currently creates and performs work for his own company, Anatomiae Occultii. He has also choreographed two music videos for Tokyo- based musical act mishmash* and was selected as a participant in the 2011 Alvin Ailey Dance Foundation New Directions Choreography Lab. His short-film collaboration with filmmaker Nel Shelby, Folie a Deux was screened at the Dance On Camera Festival in Lincoln Center in 2012. He received a 2014 Lotos Foundation Prize in the Arts and Sciences and has been an artist-in-resident, most recently at the 92Y (2016-2017). Adam is currently working on a new physical theater production of Stephen Sondheim’s Sweeney Todd.