The curtain went up on what I call “the electrocution section.” RIPple efFECT, by French-born and trained, New York-based Manuel Vignoulle, premiered as the first piece on Whim W’Him‘s X-POSED May program. Out of industrial-sounding static and a clutch of fallen dancers, Tory Peil rose and twitched, ecstatic or tormented, as if possessed. 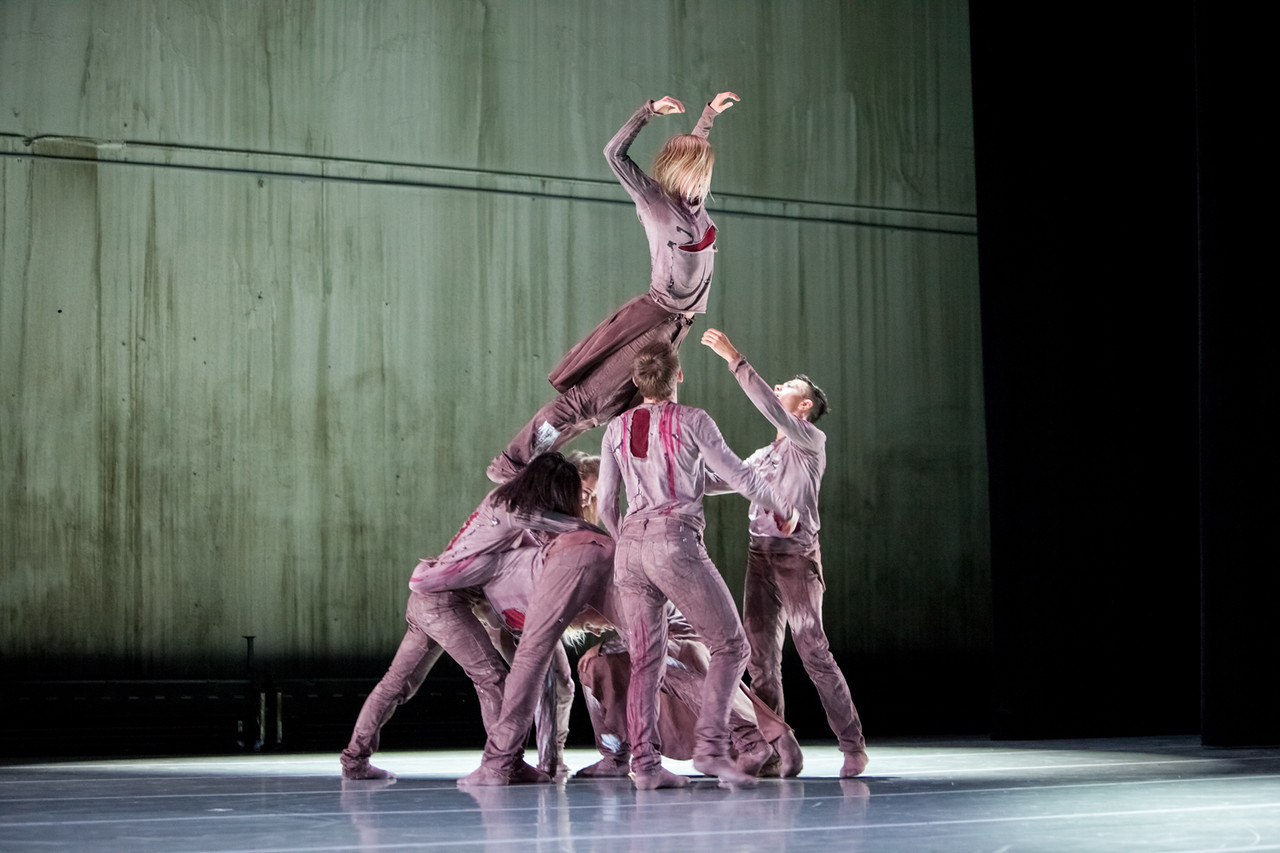 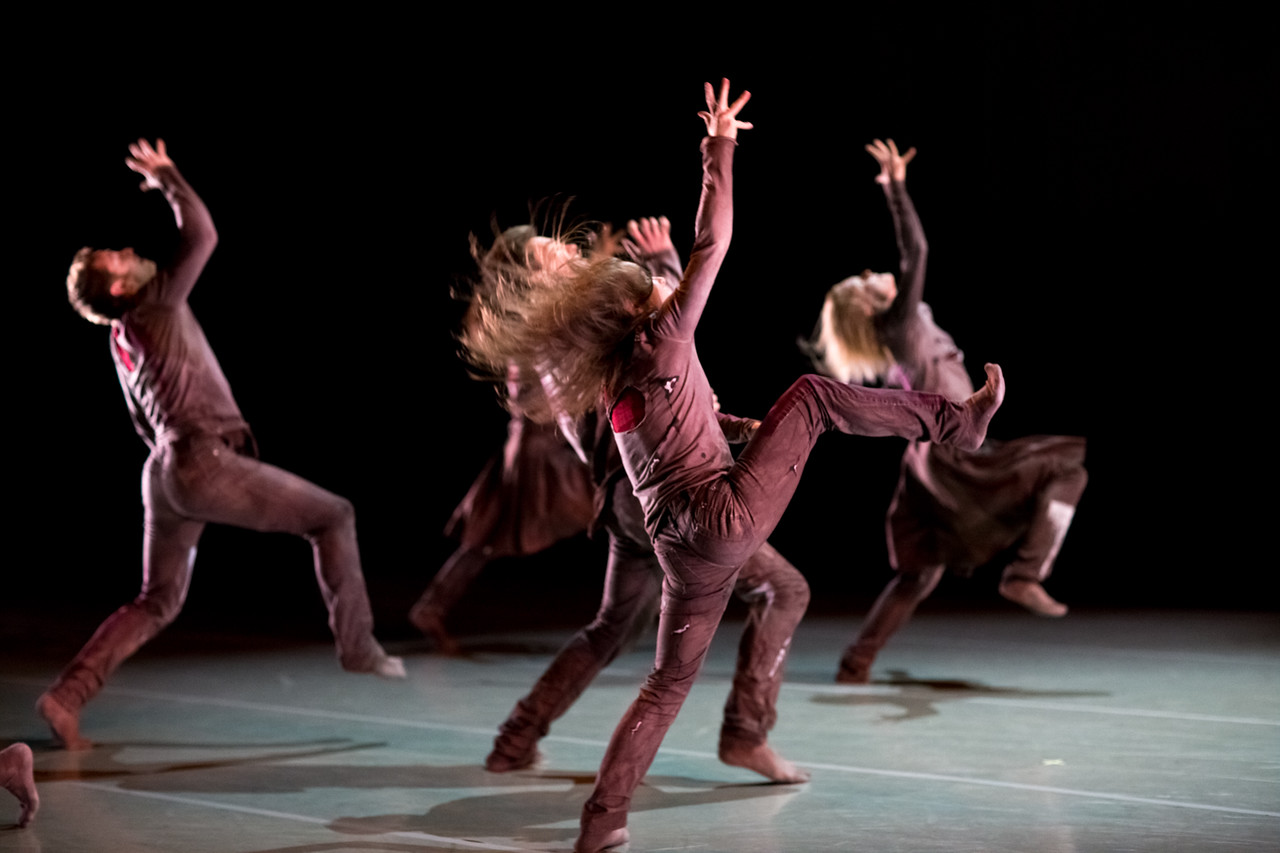 Propulsive pace and music, plus a taxing range of movement and the demands the piece makes on its performers were “literally breath-taking,” as I heard one audience member say—for dancers, but also for the spectators. “A visual bombardment,” a friend admiringly called it. In critical response too, a variety of metaphors and similes abounded.

For Alice Kaderlin writing in her blog ‘FeetFirst‘ for The PI, “The dancers look completely comfortable with Vignoulle’s fluid, whirling movements and with the mood of tribal ritual that Vignoulle creates. As they weave in and out of each other or perform Vignoulle’s compelling ensemble sections, the seven dancers could be a primitive cult from a distant past or denizens of a remote planet defeated by a greater intergalactic power. Either way, they and Vignoulle keep us riveted.” 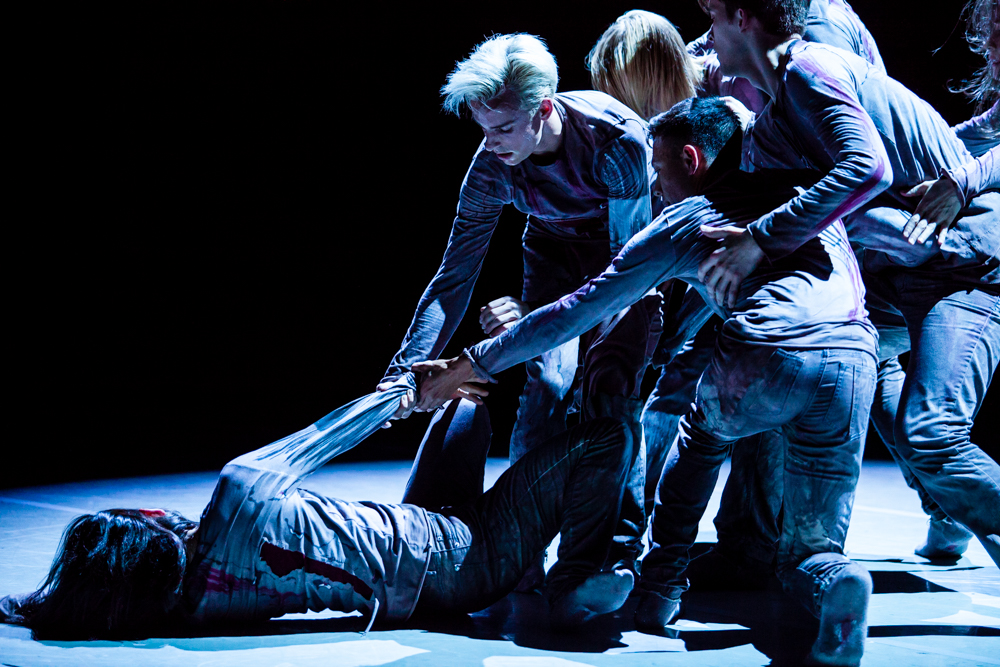 In a review on her blog ‘And another thing,’ Marcie Sillman noted, “RIPple efFECT is high-energy, a continuous swirl of acrobatic action. There are also moments of rest (luckily for the dancers), and quieter contemplation. In the second section, for example, all seven dancers join hands in a circle, then move in and out, up and down, reminiscent of a sea anemone that pulses with the tide.” 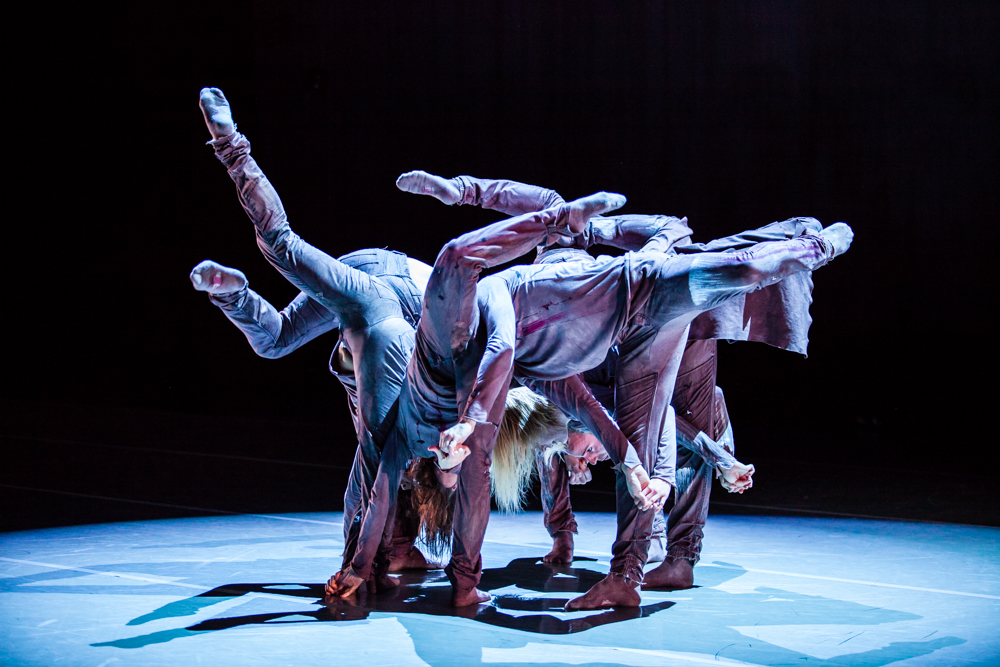 Writing about Whim W’Him’s X-POSED and Pacific Northwest Ballet‘s Carmina Burana program the same weekend, she singled out Ratmansky‘s Concerto DHCS and Manuel’s piece to compare, “because they prompted me to think about patterns, and nuance, and most of all, the complex marshalling of bodies in space,” then added, “Oh, and they both featured bravura performances from excellent dancers.” 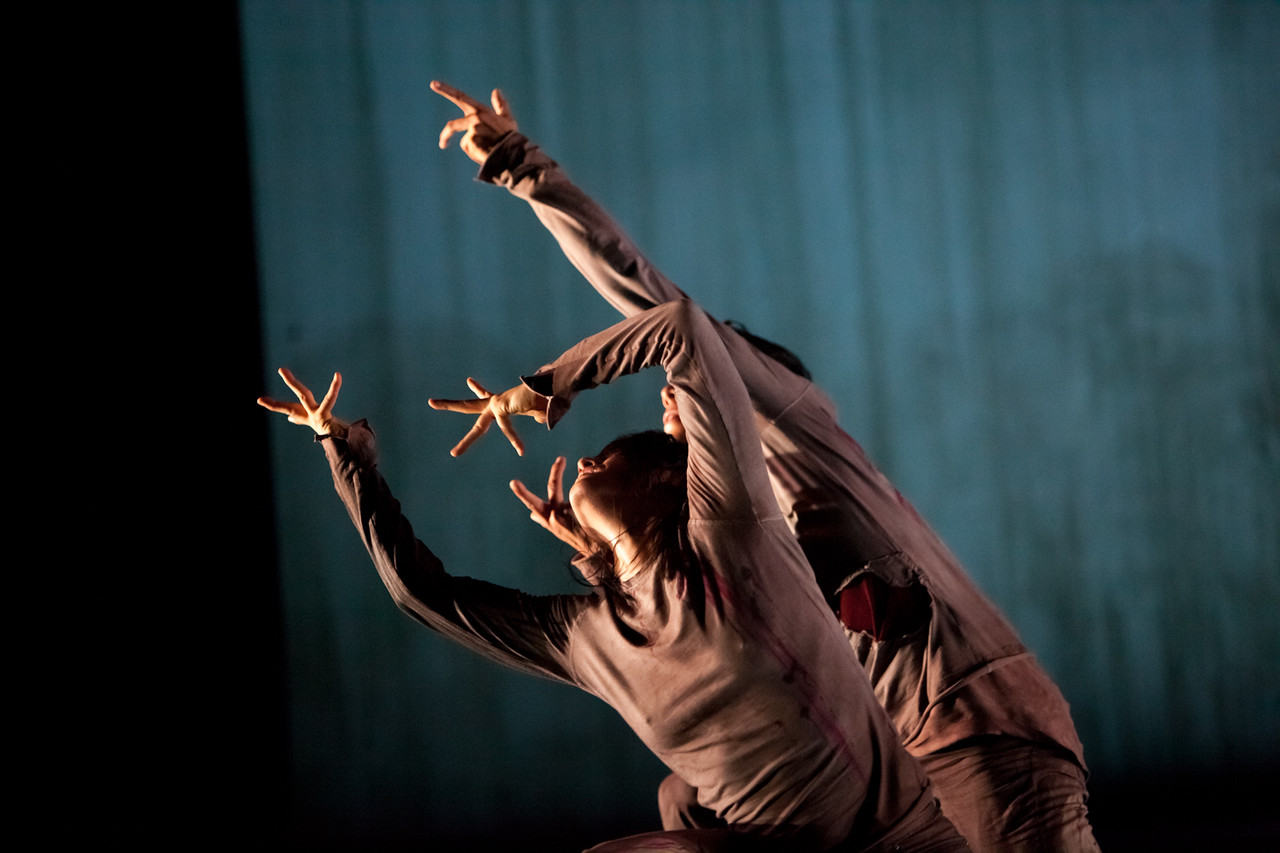 Time and again, the immense energy of this piece and the ability and passion it required and exacted of the dancers aroused comment. Said Michael Upchurch in the Seattle Times, “It’s a kaleidoscopic tangle of constantly contrasting textures. Its movement is insanely varied, with loosey-goosey turns taking instant shifts toward the sharply etched (and vice versa) without ever sacrificing any clarity. The dancers’ feats of memory are as impressive here as their acrobatic agility.” 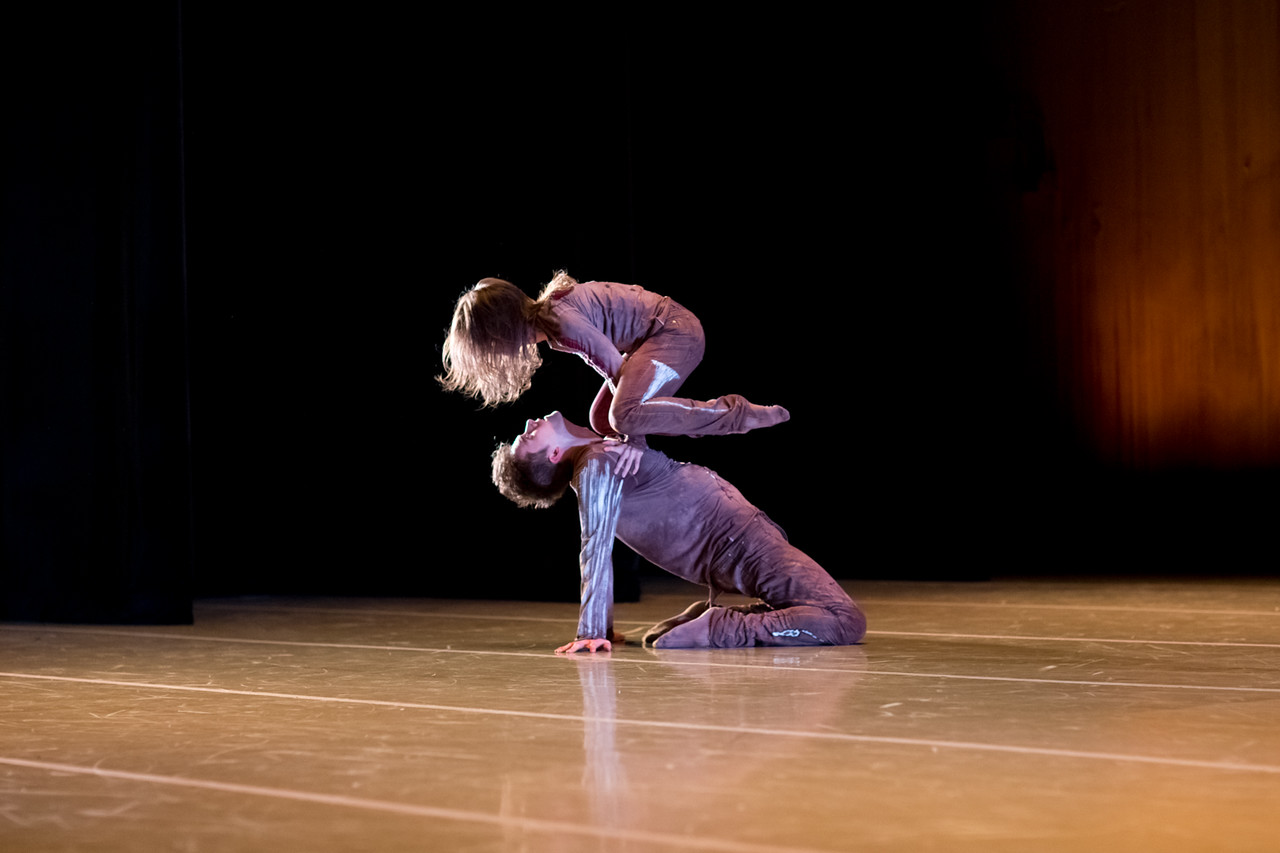 Michele Solano, on her ‘Thus Spoke Lady M‘ blog, reported: “I found myself experiencing anxiety and stress watching the dancers, like watching a suspense film and desperately wanting the hero and heroine to escape whatever is chasing them, holding them captive. And just when one or more of the company members would find themselves breaking away from the group, the group would grab hold and pull the dancer back in the most jarring way creating horizontal pictures of tension, and the next thing you knew another fascinating vertical shape would be created as they all moved as one. This choreography was eclectic, volatile, and extremely creative.” 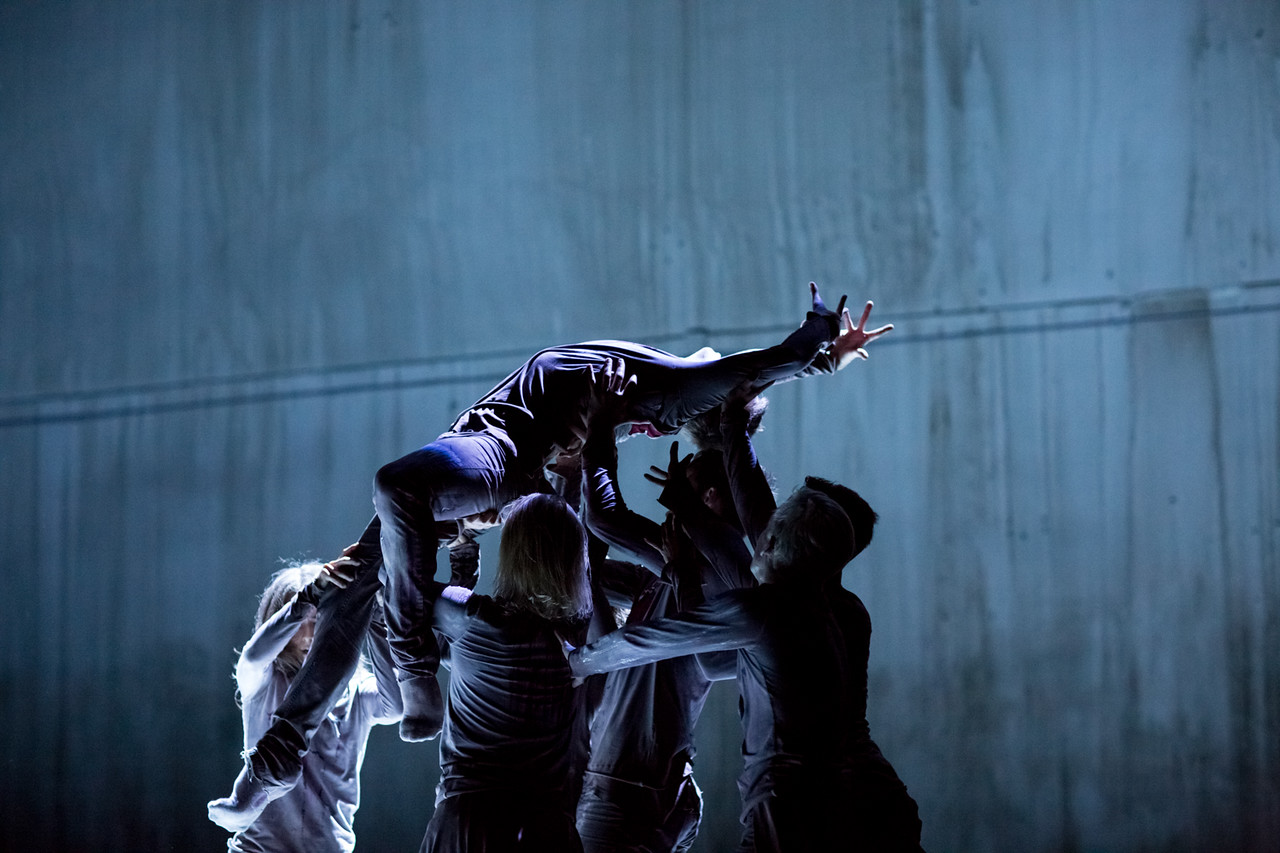 For some watchers, the pace was too unrelenting. Ciara McCormack of Seattle Dances commented: “Costumed in ragged grey garb with red, wound-like rips, the dancers moved between huge stag leaps, spiraling falls, and Thriller-like tics with wide, satisfied grimaces on their faces. Slowly, the choreography evolved, at first cutting between animalistic prowling, smooth unison, and incessant shaking, before morphing into a stunning series of risk-taking partnering and lifts. These pairings showcased the prowess of the dancers and followed the ripple of change that one person can effect on those around them. But, no matter how impressive or suited to the theme of the piece, such a long series of physical tricks wear out quickly.” 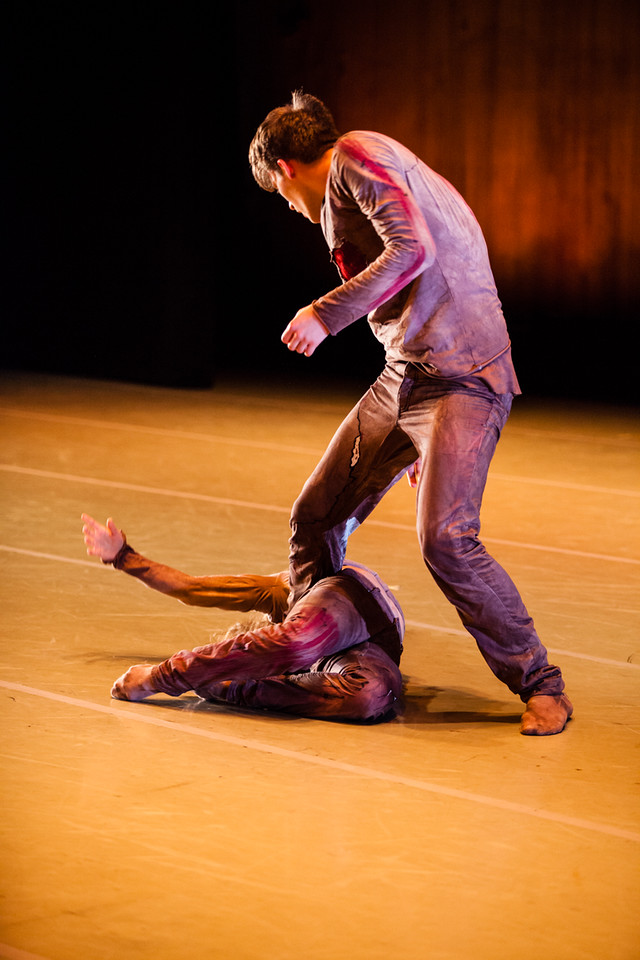 Yet in Rachel Gallaher’s review: “Ensemble sections were full of leaps, turns, spins, outstretched waving arms and always a strong pulsating energy (and moments where the unison is so spot-on it appears mechanic), but it was the duets and smaller groups that provided some of the most emotion-rich moments in the piece.” 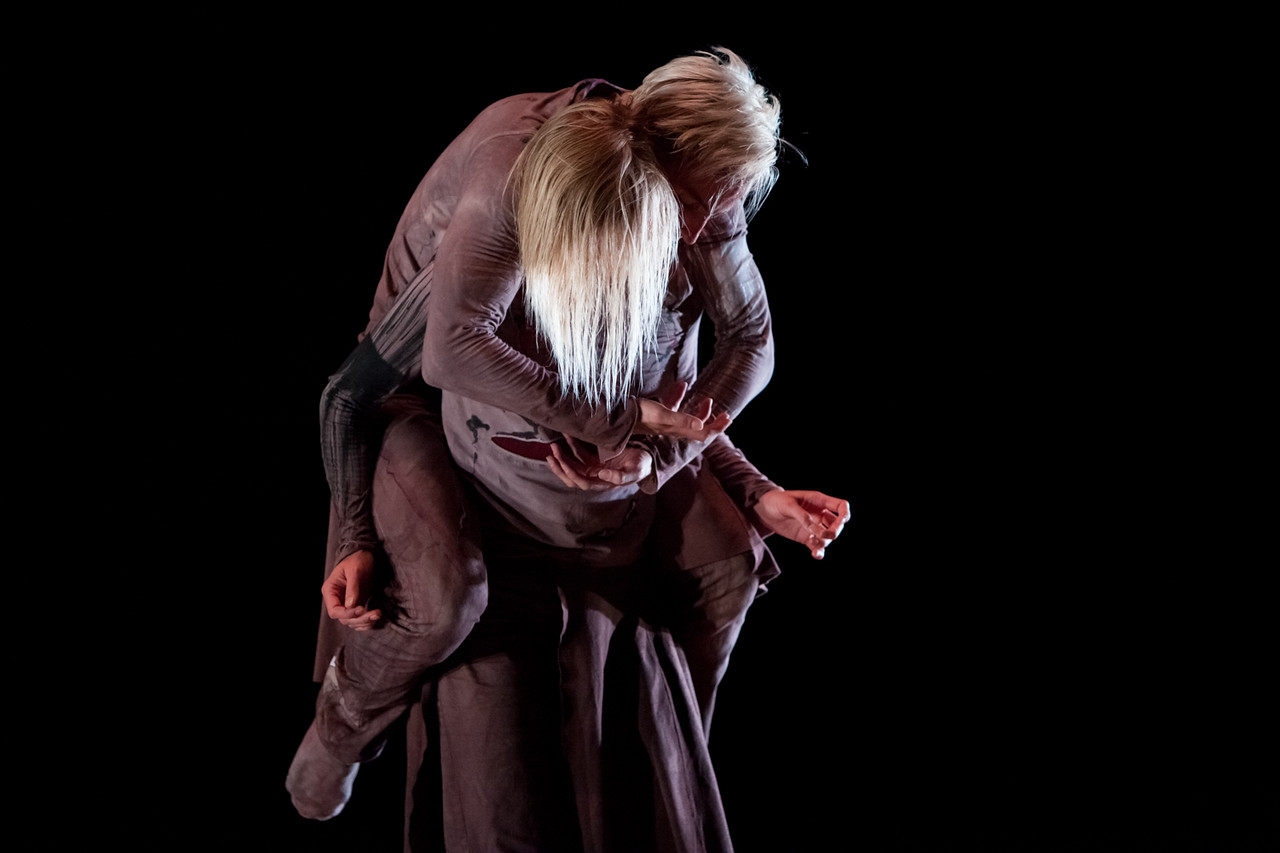 And indeed, throughout RIPple efFECT, in the midst of constant and unending chaos, instants of quiet or flashes of momentary unity bloomed. These were not always comfortable. A poignant duet of Tory and Justin Reiter seemed at times a tender connection between two lovers, or mother and child, but by the end it suggested to me a burdened Old Man (in this case Woman) of the Sea. 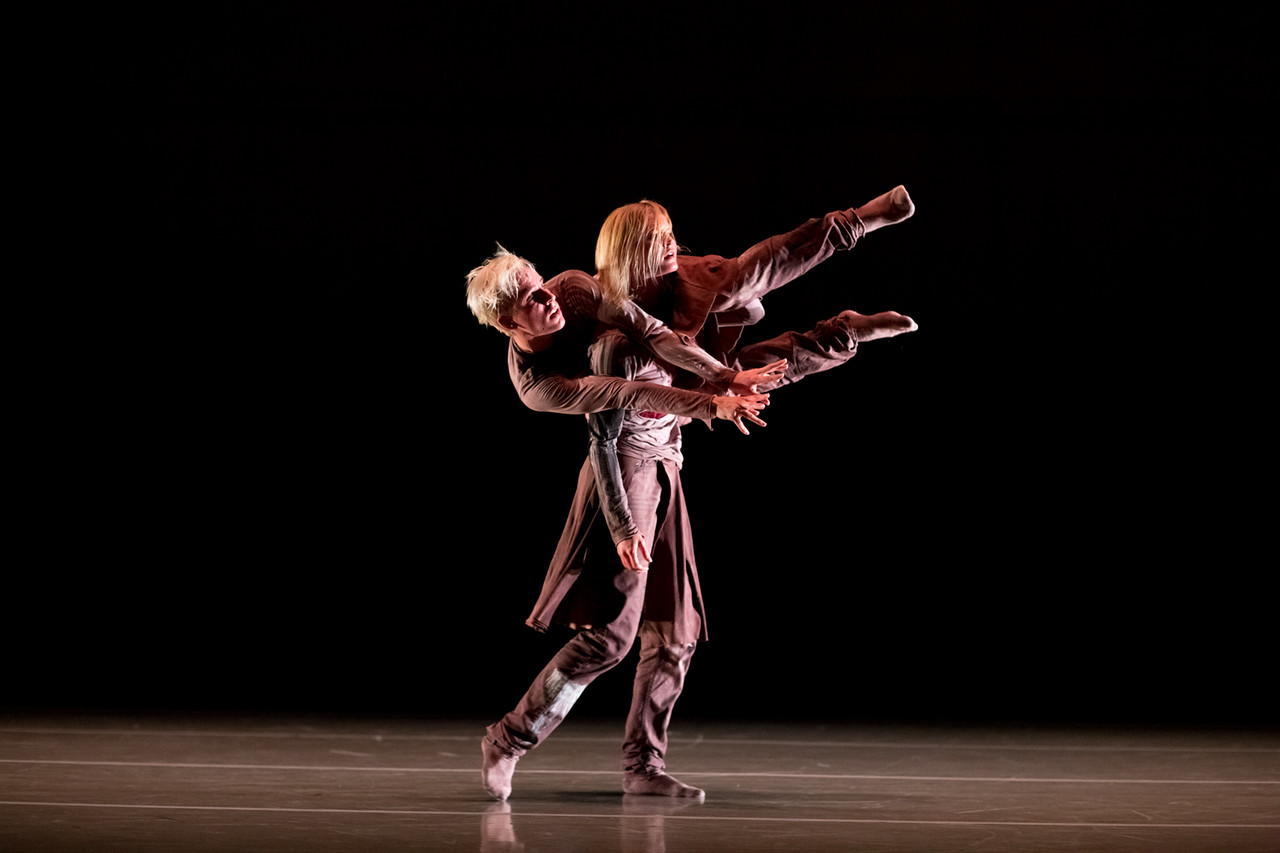 And the unison sections often, along with the jumble of shouting voices that at one point emanated from dancers, conjured mass hysteria as readily as community. 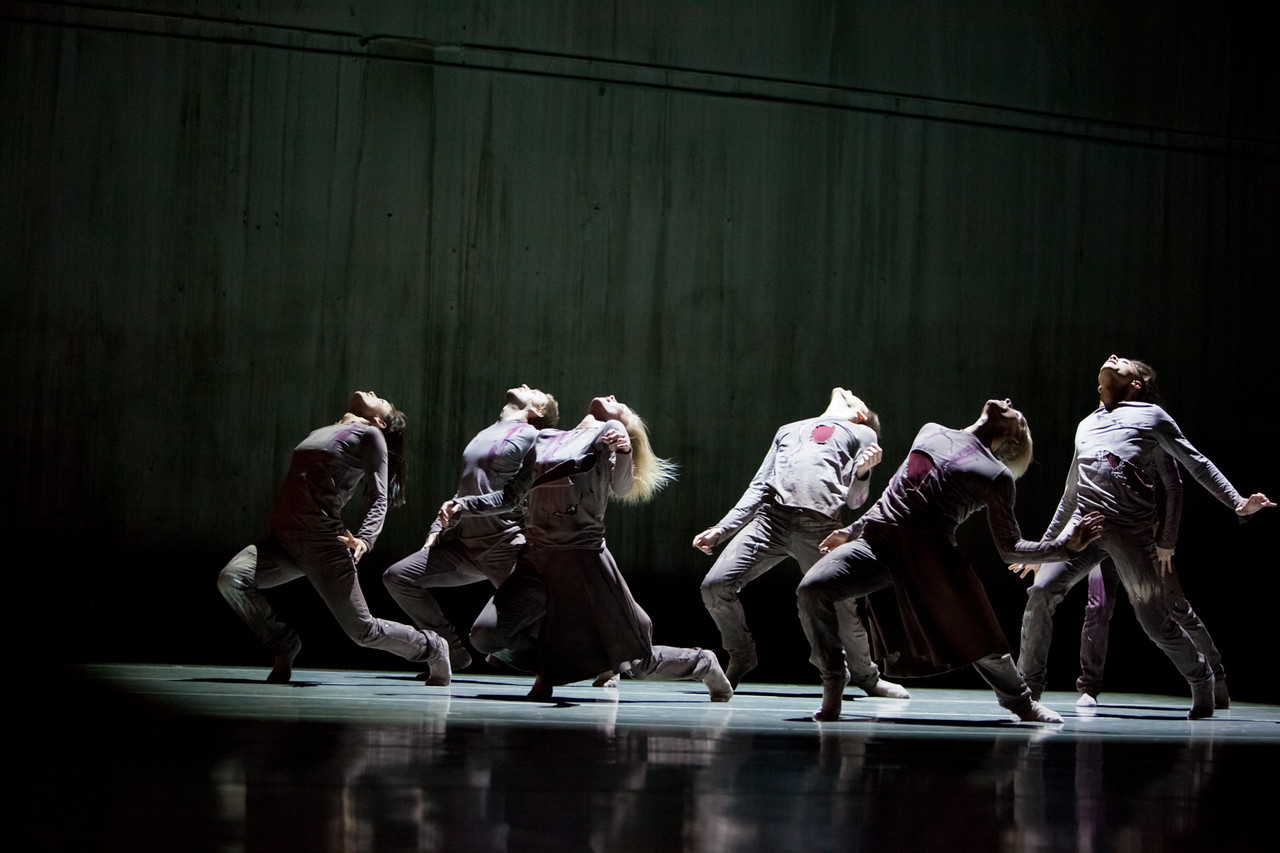 While working on program notes, Manuel himself characterized his piece by saying: “Each individual, has a personal story, background, energy, vibration, affecting the whole group in constant evolution, transformation, mutation, renewal, flow. That same group (surrounding/environment) will influence each of their being at the core.” 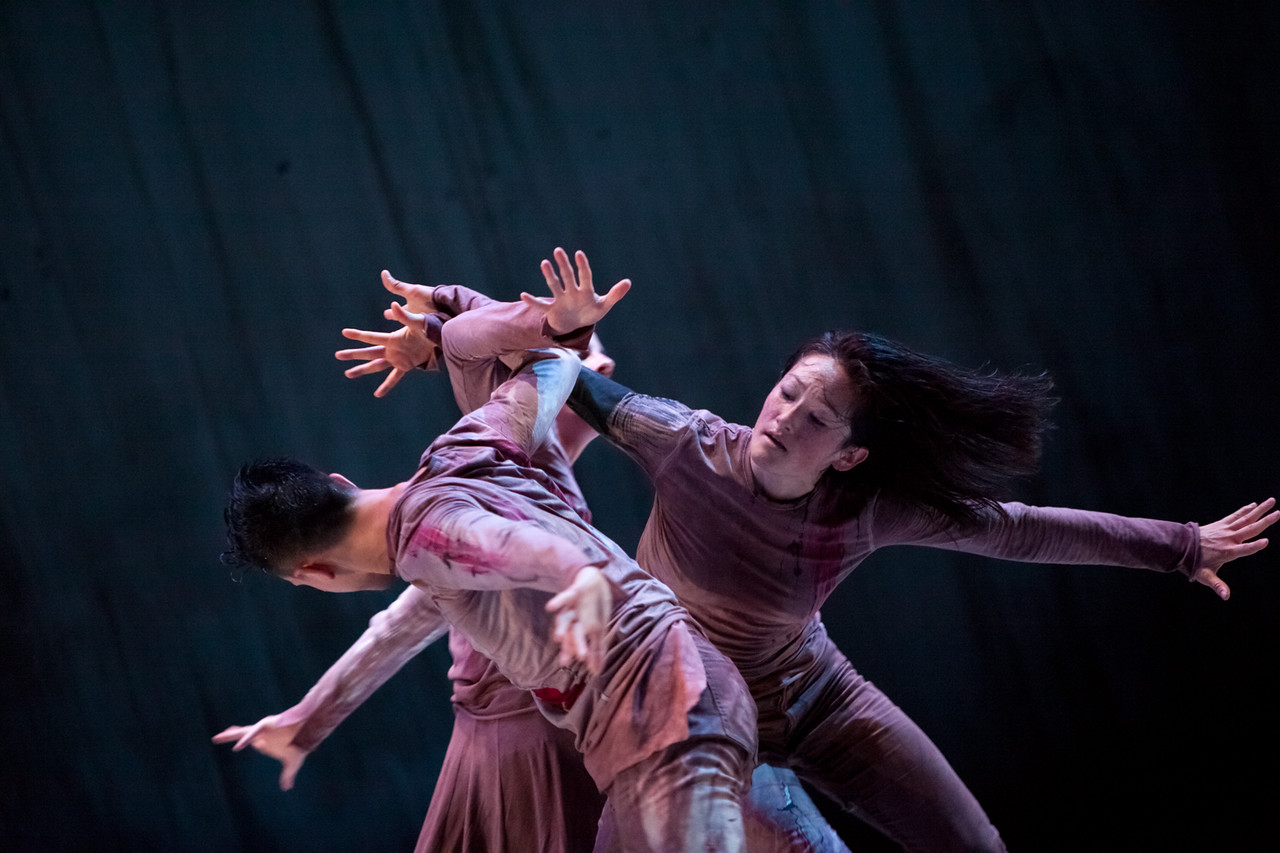 He told Imana Gunawan of the University of Washington Daily, “I always love the notion of group and trying to find harmony somehow in the group, even if you have very eclectic people. The idea is what is the influence we have on others? It’s all about going with the flow and following different influences instead of resisting.” But isn’t it often through resistance that we find or define our humanity and bring forth harmony? 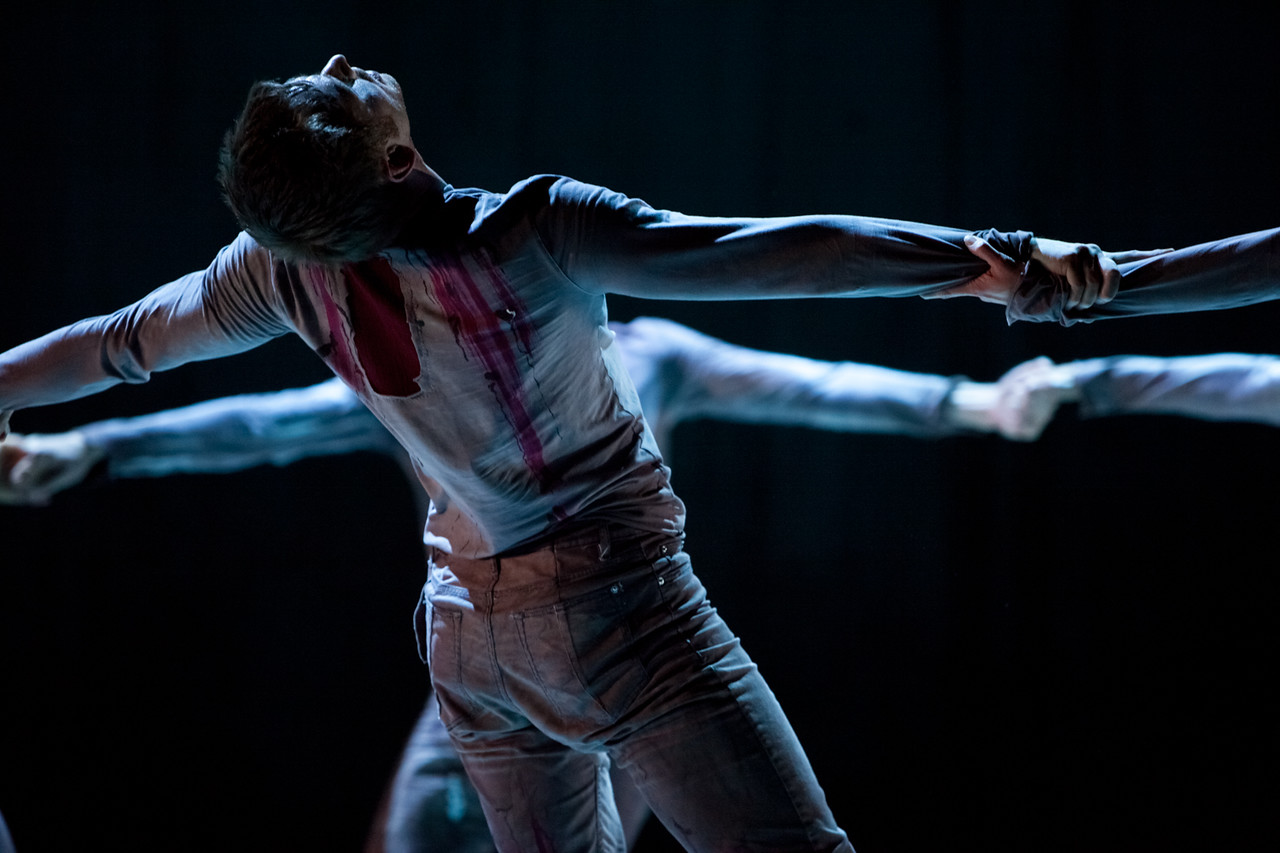