working on the wild side – Midsummer

Last month—as I watched Whim W’Him‘s artistic director, Olivier Wevers, create a new Midsummer Night’s Dream for Grand Rapids Ballet—it was the first time I’d seen him choreograph within the setting of a ballet company where dancers’ basic training and intuitions often run quite counter to what he asks of them. It was also my first observation of his handling an evening-long story ballet. Beside production values (touched on a bit in last week’s post), the success of such a reimagining depends, I think, on 3 elements: a narrative at once subtle and comprehensible; compelling characters; and thrilling movement to revitalize an oft-told tale.

All 3 of these components mesh in Olivier’s story-telling. As a dancer, he was known for his acting, and he understands how to evoke complex feelings by means of clear, clean gestures. In rehearsal he demonstrates how, with exquisite economy of movement, King Oberon seizes the magic flower from Puck, strips off its enchanted essence with one hand and turn all his concentration to the motion of blowing it onto his sleeping queen, Titania, while the other hand imperiously discards the plant with a flick of the wrist. Awkward and wordy to explain, a marvel of precision when precisely executed.

A simple detail can speak volumes. To Yuka Oba, the Titania, Olivier says, “You’re the queen. Look up right away, not down. Never look down.” The winsome Yuka lifts her chin. She is metamorphosing into a monarch. In a later scene, as infatuated as she is by Bottom—the ‘Rude Mechanical’-turned-donkey whom the magic flower has made her love—she has the royal presence to dismiss her servants haughtily. Her proud confidence makes credible her quarrel with her arrogant husband.

Nicholas Schultz is a very nice, friendly, thoughtful person, attentive to others’ feelings. As Oberon, he must portray a domineering, sometimes cruel king. I watched while Nick grew into his part—Oberon mistreating Puck, tricking Titania without conveying the least compunction; Nick learning to channel his inner bastard. A challenge (perhaps a certain kind of pleasure?) to inhabit a persona so far from his own in real life…

Meanwhile, Kyohei Giovanni Yoshida (known as Yoshi) is a natural Puck. With a mischievous bearing and knowing demeanor, he projects a born trickster and complex character—at once subservient to his master and an artist of mystery and disguise.
And Yoshi’s manic glee—surely not feigned—when he got to use the CO2 machine in rehearsal one day, is infectious… 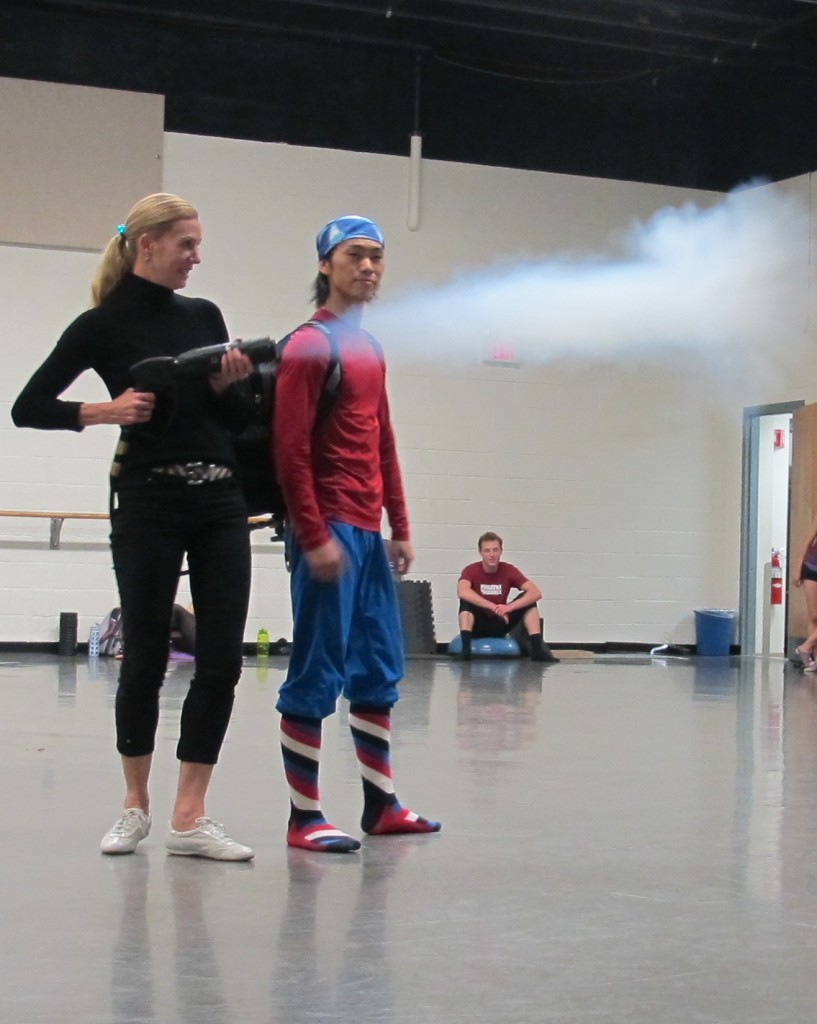 The same afternoon, Olivier urges the two lovers (Hermia & Lysander, danced by Connie Flachs and Steven Houser), to smile more. “It’s all about your partner! You’re in love!”
He calls out, “Look at each other, don’t ever lose contact,” and I remembered how Olivier used to dance each pas de deux as if his partner were his one true love.

In several fascinating rehearsals, the dancers worked on some rapid and difficult sequences for the attendants of the royal pair. A frustrating process—less because of the complexity and speed of the ensemble sections than the unfamiliarity of the movements and the fact that they must be danced as if they’re second nature, which of course they’re not. There’s is a pas de huit (eight) that’s “got to be like a pas de deux” in its exactitude & timing.

Olivier was a ballet dancer for well over two decades, before he retired to devote himself full-time to running his company and choreographing. He was steeped in ballet vocabulary, repertoire, mentality, well versed in classical mime, acting and the ways of telling a story in dance. But although his own work has a classical basis, he turns traditional steps and poses upside down (sometimes literally), stretching and distorting familiar shapes and rhythms with his very distinct approach to using energy, weight shifts and momentum in the service of characterization and narration, as well as in pure dance. Such subversive intentions are sometimes tricky to get across.

As Olivier envisions them, all the creatures of this magic other-realm are quite literally “outlandish.” Their emotions may be akin to mortal ones of love or fear or jealousy, but they aren’t humans in how they comport themselves. Their movements are exaggerated, untamed. The male attendants bow to Oberon, sinuous as leopards.

To the fairies too he says, “You guys move so well, so show it off. Don’t think too pretty ballet there. Be like animals. Grrr. Reach out. I want to see that in your bodies. When you’re running ladies, don’t be stiff. More messy, not placed, flung…

“Ballet is all about position. I want the exact opposite. You never get in a position and stay. When you get there, you’re already moving on. I’m asking you to create a billion positions, each bit on the way is equally important…

“There are times you want it clean, but here indulge it. Let’s not be tentative. This is where your wild nature is wanted. Let’s screw up. If you mess up, look around and keep going. For everything you do, you need to push it further.  Be wild, play with it—I want to see the feeling.”

Olivier stops the music. “That was ballerina the whole time. Lose control, lose control. You’re controlling it the whole time. Get out of equilibrium, so you’re almost going to fall. Going really fast and it’s slippery, use your body, it will help. If you let your head and body go, it happens, you don’t have to do anything about it.”

Finally, near the end of rehearsal on Saturday, just a few hours before the gala, he says, “Okay. Let’s see if we have animals in here now. Let’s dance together.  We’re here because we want to be. Don’t wait to be yelled at. Enjoy it!”

The music begins one more time, and suddenly it all starts to click. “Nice, nice that sideways, everything you do should have that sideways idea. There! That’s much better.“