The public wasn’t due at the Joyce Theater, for its Ballet v.6.0 program, until evening. The house waited empty except for a photographer and writer from Dance Magazine and a few observers like Patricia Barker and Michael Auer of Grand Rapids Ballet. 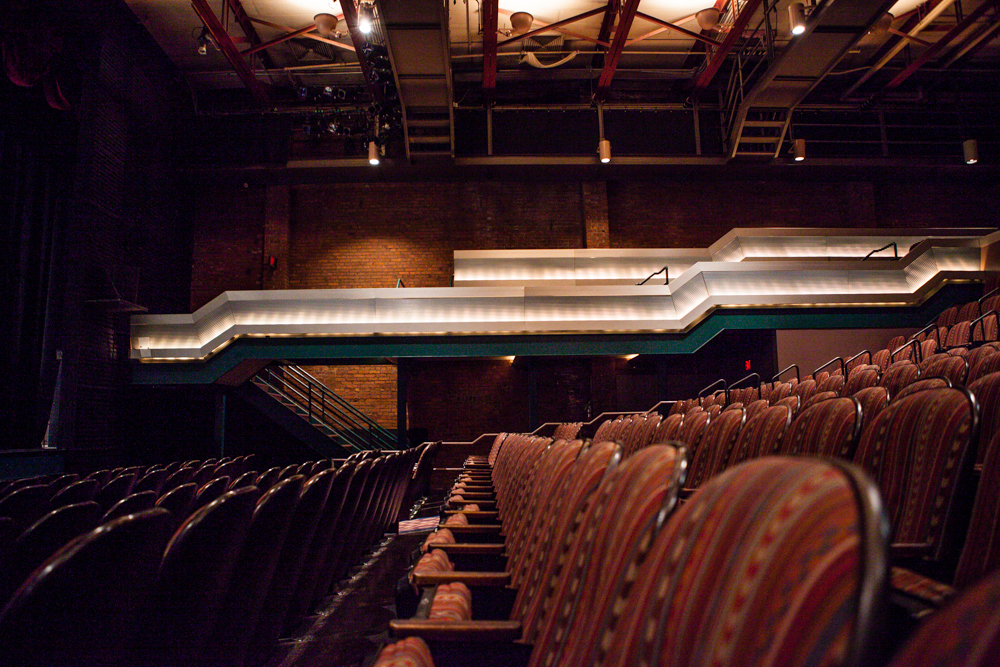 On stage, before the auditioners came in, were Whim W’Him artistic director Olivier Wevers and dancers Andrew Bartee, Kyle Matthew Johnson, Jim Kent, Mia Monteabaro, Shane Ohmer, Tory Peil, Lucien Postelwaite, & Lara Seefeldt. As Olivier had said back in Seattle, “It’s great to have all whimmers on stage warming up—setting a standard, not just waiting for someone to tell them what to do.” Soon 35 auditioners filed in, mostly from the NY area, though some drove quite a distance, from places like North Carolina (for the Seattle audition later in the month, some flew in from Alaska or California).

More akin to a three-hour master class than the usual cattle-call, the afternoon’s work featured Whim W’Him dancers, there to participate along with auditioners.

“We work collaboratively,” noted Olivier, introducing himself and the dancers. “We’re not running this like an audition,” he added with a grin, “so don’t show off.” He spoke briefly about some of the non-balletic elements of his dance vocabulary, like the “sickle-pickle,” an in-turned and stretched but not pointed foot. Then work began.

The proceedings were divided into several parts: individual, improv, and partnering (woman/woman and man/man, as well as mixed couple). In all except improv, one or more Whim W’Him dancers demonstrated segments of Olivier’s choreography from, say, Approaching Ecstasy, Monster, The Sofa, or I don’t remember a spark.
The dancers practiced all together, the stage a seething mass of moving bodies.
Then, to an eclectic variety of musical selections, auditioners performed solo or in small groups what they had learned. The rest, standing on the sidelines to watch, applauded. Throughout, Olivier was interested in not just what kind of movers the dancers were or if they could handle the material, but how they interacted with and responded to each other. “The working process is as important to me how they move,” he says.

Dancer Kyle Johnson describes the scene this way: “The thing that really set this audition apart from others that I have participated in, which relates to my job in the audition, is the presence of the company dancers as guides. Having the company there I feel really helped, the dancers had many examples of Olivier’s style to emulate, and while 1 or 2 dancers were demonstrating a combination, the rest of us could stand back and give individual corrections to dancers on style and choreography. And many of us got to dance with the auditionees one on one which allowed us to get a better feeling for how they moved and vice versa.”

Olivier moved among the dancers, talking about details, “Really show me the slide“… “the fingers not splayed, just relaxed not doing anything“…”climb right up into the demi-pointe“…”imagine there’s a gummy bear on the floor and you’re squishing it“…”look under your legs, see the last row of the theater”…”use your body, don’t be stiff—I want you to be real, not performing.”

In the words of Whim W’Him dancer Jim Kent, “As the Whim choreography was taught, It was fun to notice the subtleties and detail become more and more distilled, to see who could embody Olivier’s quirks in the cold context of an audition. Afterwards, I talked with some dancers outside on the sidewalk who didn’t make the cut. They felt an overwhelming feeling of satisfaction, like, ‘Yes! That was 3 hours very well-spent.’”
This latter was a view shared by many, from other comments on the spot as well as a lot of email feedback.

In Seattle, the same format was followed, except cuts weren’t made after each hour.
As Kyle put it, “The auditions were great. We had a good turnout in both New York and Seattle. The dancers were all very talented. The biggest difference I could think of between the two cities is that the dancers in Seattle seemed to know more what they were getting into. Many of them had seen Olivier’s work, some had taken his workshops, they just in general seemed to have an idea of what the work was going to look like.”

Throughout both sessions, all the company members watched and took note. At the end of each section, there were discreet comparison of impressions. Some auditioners stood out very fast. Others showed their colors as the afternoon proceeded.

The final part of each audition was a “pow wow” in which the few dancers who looked to be most promising Whim W’Him material were taken aside for a wide-ranging discussion of their views on dance, their inspiration, and their careers, qs well as questions from prospective whimmers about the company, its artistic vision, and practical matters like timing, salaries or what it’s like to live in Seattle. “You find out a lot,” Olivier said this week, “about personalities and interests from the kind of questions people ask.”

Now Olivier is in the process of looking at budgets, scheduling, the dancers he already has on board, and what will be performed this coming January and next May. “The plan is becoming less blurry,” he says, and soon Whim W’Him will be ready to send out offers.