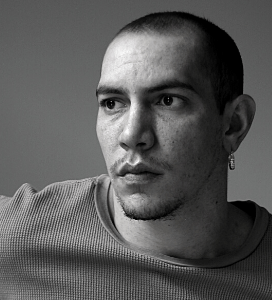 “I’ve always wanted to dance, and I figured the only way to do it is to do it!” Mark Caserta said to VoyageDallas in 2018. It didn’t start out too well. As a small boy he bonded with his grandmother—“my best friend,” he told me—and the musicals they watched together on film and even in person. Music and dance were where his heart lay, but it wasn’t an easy path. Mark’s father, a football player in college, was a huge sports fan and a coach. But with his kids, stereotypical gender preferences were reversed. Mark’s big sister loved sports and played on all the teams. “My sister was amazing, I was not,” he acknowledged in that same interview, “and my dad kicked me off the teams because I was twirling in the outfield.” Then, when his sister started dance classes, Mark did too, but while “she hated it and left, I loved it and stayed!” Sorting all this out in his relationship with his father was a challenge. His parents feared that financially he would have nothing to fall back on. But eventually, with his successes in his chosen field, it got resolved and “now my dad is my biggest supporter.” 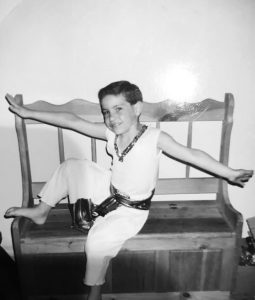 All through elementary school and beyond, Mark took dance classes, put on shows with other kids and immersed himself as much as possible in the glittery world of show biz. When he finally applied for and was admitted to CAPA (the Philadelphia High School for the Creative and Performing Arts), he knew at once that he had found not only his calling but his profession. The fun had always been there, but his dedication to hard work grew as his horizons expanded. His greatest ambition at the time was a contract with Complexions Contemporary Ballet, formed in 1994 by Dwight Rhoden and Desmond Richardson. Mark did a summer intensive there, and while he was a senior in college, at the University of the Arts School of Dance in New York, he was offered a contract with the company. Very worried about what it would do for his future in dance, Mark nonetheless chose to finish out the academic year.  Despite his trepidations, after graduation he booked an audition and was asked to join the company in New York, where he spent 4 years dancing, teaching (a newly discovered love) and choreographing again. In collaboration with “my best friend” Khadija Ahmaddiya, he started a small dance film company DRIGGproductions. 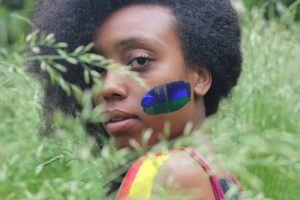 There followed 2 years dancing with Les Ballets Jazz de Montréal, touring extensively, finding his life and work partner Mikey Morado, dancing with Camille A. Brown, and  continuing to work on films with DRIGGs. The next step was a move to Dance Industry Performing Arts Center in Plano, Texas with full time jobs for both himself and Mikey. For 3 years they taught and co-directed the Pre Professional Program, preparing students for college and beyond. 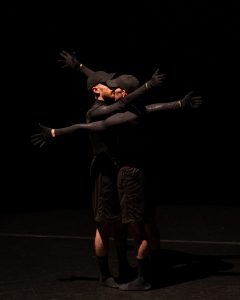 Then in early 2020, the plan was to go east again. Mark had missed something both in not performing and spending so much time on others’ work. “As a kid, I loved curating events or little shows,” he says. “I loved being at the helm and root [of projects], bringing people together in dance.” The need to make dances “bubbled to the surface” again too. Excited about the artistic energy of the east coast, he arranged to teach at Philadelphia’s University of the Arts 4 days a week in person, as well as to work in New York with Gibney Dance and Peridance. But just around this time the pandemic struck, and of course everything changed. 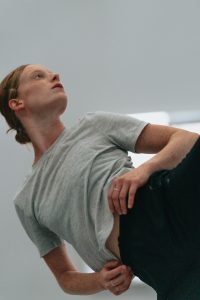 Mark says he is so happy that, despite the different circumstances, he was able to come to Seattle this summer to make a work in the studio with the dancers that would be performed both on stage and on film. “Some things you can do in film that you can’t life and vice versa,” he comments. 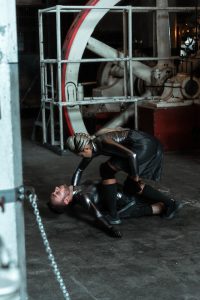 I asked him what he brought into the studio on the fist day with Whim W’Him. “Anxiety and nerves,” he says, especially as it was so long since he’d worked in person. During the long pandemic months he zoomed with friends and collaborators. “All that stuck with me in this isolation these past 2 years” All the emotions of that time fed into the new piece. “I didn’t have a story or narrative.” That first day he and the dancers mostly talked, got to know each other, breaking the ice and loosening the tension.

“I was teaching them some movement in my style to get an idea of their individual artistry and quality. We shared how we’d been feeling, and that came through in movement. I knew visually what I wanted, but not the tone, the emotional vibe.” 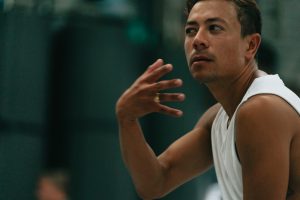 Everyone had felt the lack of human contact, “the disconnection from self, loved ones and the world. Yearning.” The result is a underlove, a dark and evocative piece, shot for the film in the wonderfully spooky Georgetown Steam Plant. 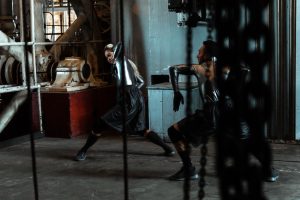 When Mark was working with Camille Brown, a “favorite choreographic artist” of his, he was inspired by how she performs in her own work. He didn’t dance himself in the Whim W’Him shows or film, “but I love to be invested in the work. I’m 100% in—I feel like a dancer in the program.” He took class with the company and “physically showing is part of the process.”

There were long periods of improvisation. Also each day, Mark notes, “we split up into groups” to concentrate on each person, trusting the dancers in developing material for their personal moments, “rather than my blurting out and imposing on them.” Aside from movement, they spent time together outside the studio too, and one time in rehearsal they drew a communal picture, while listening to music. 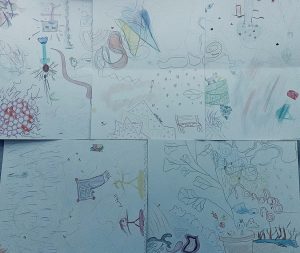 The process was fun and intertwined them all together. “Everyone could feel comfortable, safe, themselves. Not ‘just‘ dancers.” That idea is the core of Whim W’Him’s entire conception in producing The Choreographic Shindig—of which Mark Caserta’s underlove is a part—when the dancers choose their choreographers for the fall program each year. 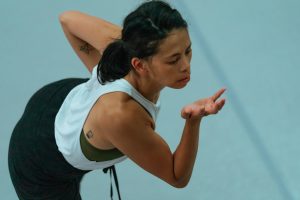