Today was an exciting rehearsal. Everyone was “on,” in an upbeat mood, both making jokes and ready to work hard. The first time in the house for this production.
And then there was the lovely preview in the Seattle Times today with a Bamberg Fine Arts photo. It was also the first sight for many of the rich beauty of Steve Jensen‘s set—floor, wings, translucent backdrop— hung in place in the theater, surrounding you, drawing you in. It will be, as someone remarked, a wonderful contrast to the stark marley floor and plainer backgrounds of the other two pieces (though I suspect that Michael Mazzola‘s lighting will do his usual transformation of the usual into the extraordinary for those works as well—but I don’t get to talk to him about that for a day or two, until the after the lights are set in the theater).

It was the first time the dancers had worked on the painted dropcloth.
“Feels comfy,” said Chalnessa Eames (the woman scorned and stoned to death in thrOwn) with a sarcastic grimace.
I asked her later what the surface was like.
“It’s okay on your

feet, but hard when you’re down on it.”
“It sounds like you’re on sand…”
“It feels like it. Sandpaper.”
Later, she called out from the stage, “I’m getting exfoliated!” 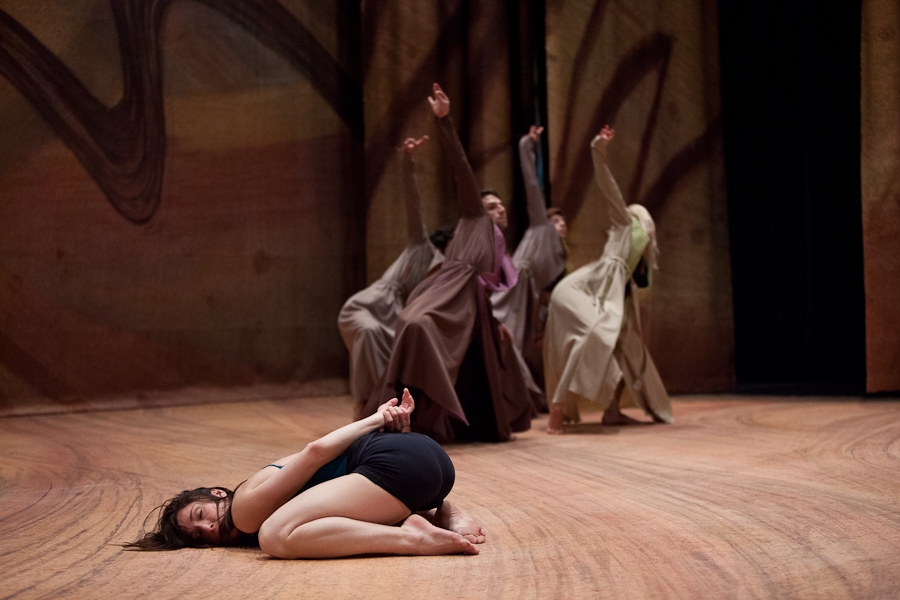 After a bit, Olivier Wevers, Whim W’Him‘s Artistic Director and choreographer of thrOwn, took the pink and green marking tape off the floor, saying it was better for the dancers to get used to taking the visual cues of the painting itself. A while further on, someone (Lucien?) stepped on something sharp. A little nail. “Our first hole in the floor,” somebody said. Kind of a bad thing, but, added Olivier, “I’m happy it was found and no one was hurt.”

Today was a sort of semi-dress rehearsal. All the dancers’ leotard-like underneath costumes, by Christine Joly de Lotbiniere, as well as the long coat/robe garments that come on and off in throughout the show, were being tried out on stage.

Questions about the fit of the robes—shoulders, too wide or narrow, where the belt should go, the length for each dancer, how the garment closes.

The leotards are made of a dyed mesh fabric (the same as that used in a nude form in Chalnessa’s separate solo piece, La langue de l’amour). The bindings, straps and triangular designs that define the bodies’ shapes are of very subtle and beautiful off-colors, a wide range of earth tones—maroon to terracotta to gray-brown to pale, yellowy beige. Neither pastels nor primary colors, these costumes seem to grow organically from each of the dancers’ skin and hair tones.

As always, I’m impressed by the amount of careful attention paid to precise details by this company, from the color and size of the rocks (lava stone that has been sealed with a lacquer so it doesn’t come off on the hands or produce dust), to the exact tautness of a shoulder-strap or the way a dancer falls to the ground. And then, of course, there is Olivier’s repeated work with each shade of movement, so that it becomes second nature to the dancers. What part of the coat garment is to be held in the “flogging” scene. The spacing of each dancer at each stage of every scene. Nuances of hand gesture and the angle at which a head must be held. 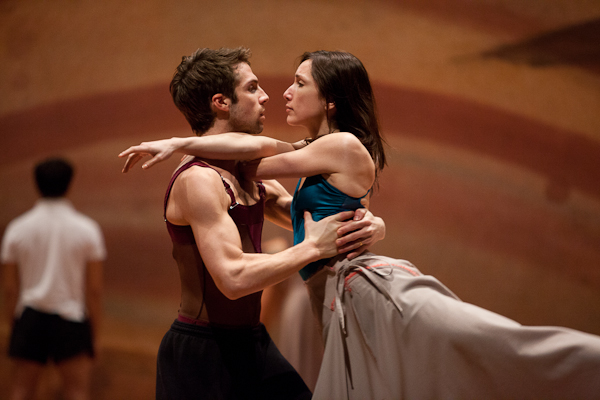 Chalnessa is especially pleased about the show because there has been more opportunity this time around to rehearse. “You’re not just trying to remember what you’re supposed to do.” She says so much is already built into the choreography of thrOwn that she hasn’t yet had to really think about acting, being a character.

That’s still to come. Although, to an observer, her facial expressions and the way she uses her eloquent body to inhabit the character she dances are already highly expressive, her role will surely grow in depth and subtlety in this coming week. 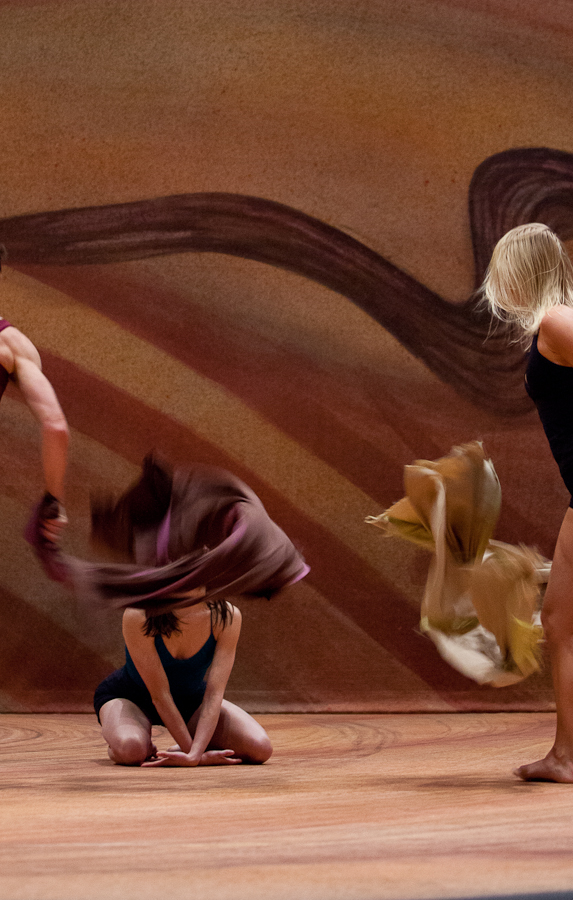 There are unexpected bonuses in being in the house and on the fully set stage.
Sounds, for one:
The moving-through-sand swish of dancers walking or rolling along the ground.
The pat-pat-pat of running feet, different than on a normal dance floor, and the wind flapping a sail flutter of the coats garments as they move with the dance.
The clattery noise of falling rocks and the sinister whap of the coat garments used as whips or flogs. 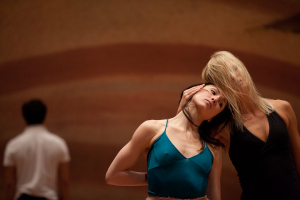 And then there is the striking beauty and strength of Tory Peil, tall, sturdy, very blond, dancing an ambiguous character, a harsh/loving mother, a judge, a tender sister.
Jim Kent, heart-rending as a son being forced to witness the  ruin of his mother.
Lucien Postlewaite in a lusciously sensual pas de deux with Chalnessa, as the lover who, quite literally, leads her astray, then later joins into the mob crying for her destruction. Andrew Bartee as the wronged and unbending husband. Powerful all. 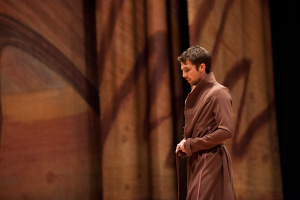 Tomorrow it’s back to the rehearsal hall at PNB. Then Tuesday again at Intiman and the first intimation of what the lighting for thrOwn will be…