“I left with a suitcase and an open plane ticket,”

says Whim W’Him‘s founder and artistic director Olivier Wevers.
He was on his way to America.
“I wasn’t scared, even though I had no money and didn’t speak the language. I thought ‘I’m gonna get a job there.’ Never thought it might not happen.”

But why did Olivier want to leave Belgium? What made him feel stalled at a dead end when he wasn’t yet out of his teens? “They didn’t allow me to be creative,” he says of his academic school in Brussels “I didn’t feel I was learning, just memorizing. I liked best the teacher in French class. One time a week we had to write something and read it out loud in front of the class. I would overwrite—so many pages.” The feedback and even the self-
exposure, “taught me so much about myself. It’s when you push yourself that you learn.” 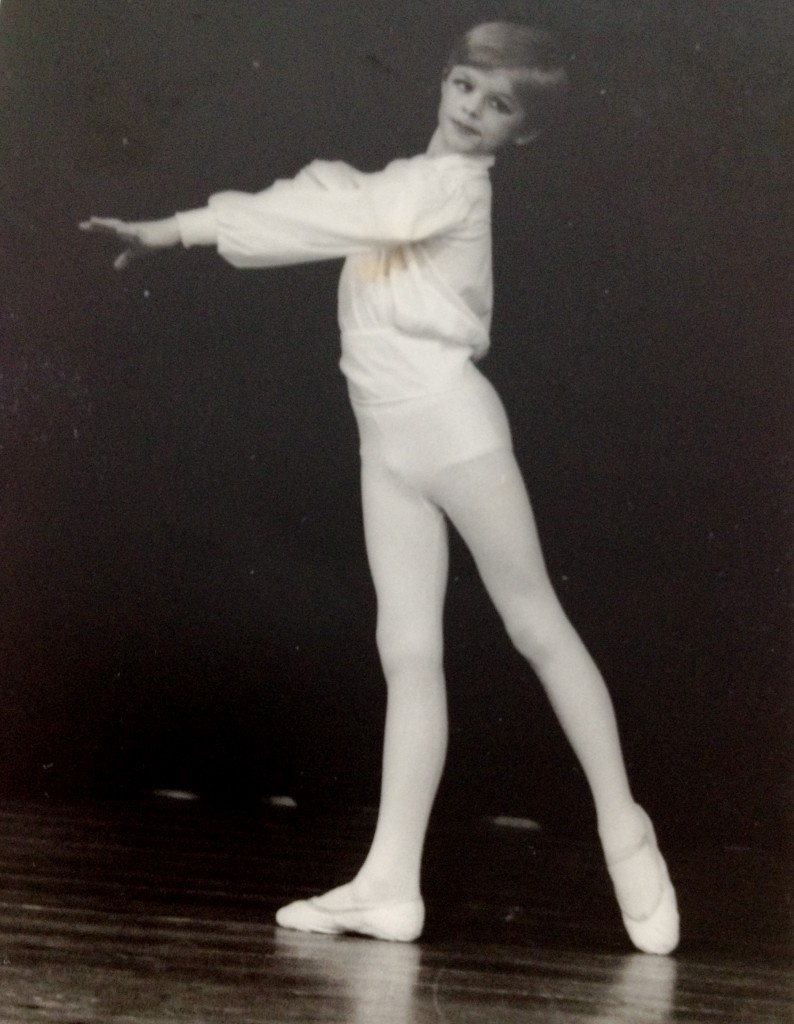 In dance he wasn’t being stretched either, except in the sense of needing to marshal the stamina and persistence to keep going. His ballet school was “not a professional one, where your academic schedule is geared to your dance schedule.” Rather, after finishing school at 4 pm, he would go on to the dance studio and wouldn’t get home until 10 or later at night.  “I did my math homework in French class, my French homework in religion class, always playing catch-up. It was a hard schedule. I was physically exhausted and totally uninspired.”

American naturalist John Burroughs once wrote, “Leap and the net will appear.”
Says Olivier: “Leaving for America was like jumping off a cliff.” He asks, “Was it confidence or useful naïveté?” and answers himself: “Being a dreamer. The American dream and my own. Always thinking everything is possible once you put your mind to it.” 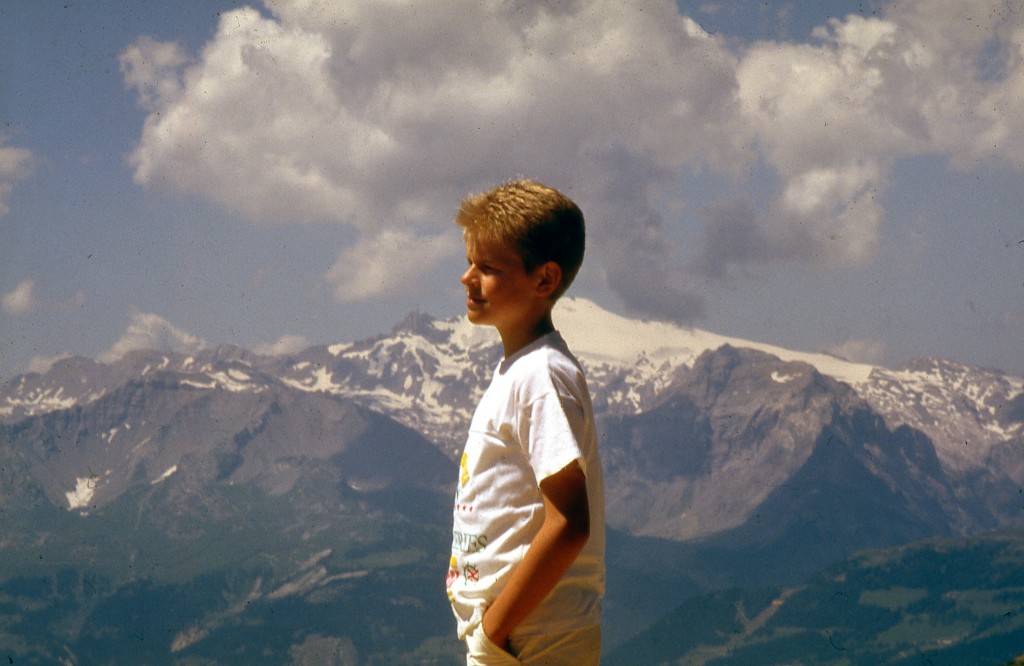 That first flight was literally his first. “I’d never been on a plane before.” In Pittsburgh, where he went to attend a summer dance course, he stayed with a host-family, though he knew no one when he arrived. But during the time there, “I went to South Carolina with another dancer in her car” and was offered a job at the Columbia City Ballet. 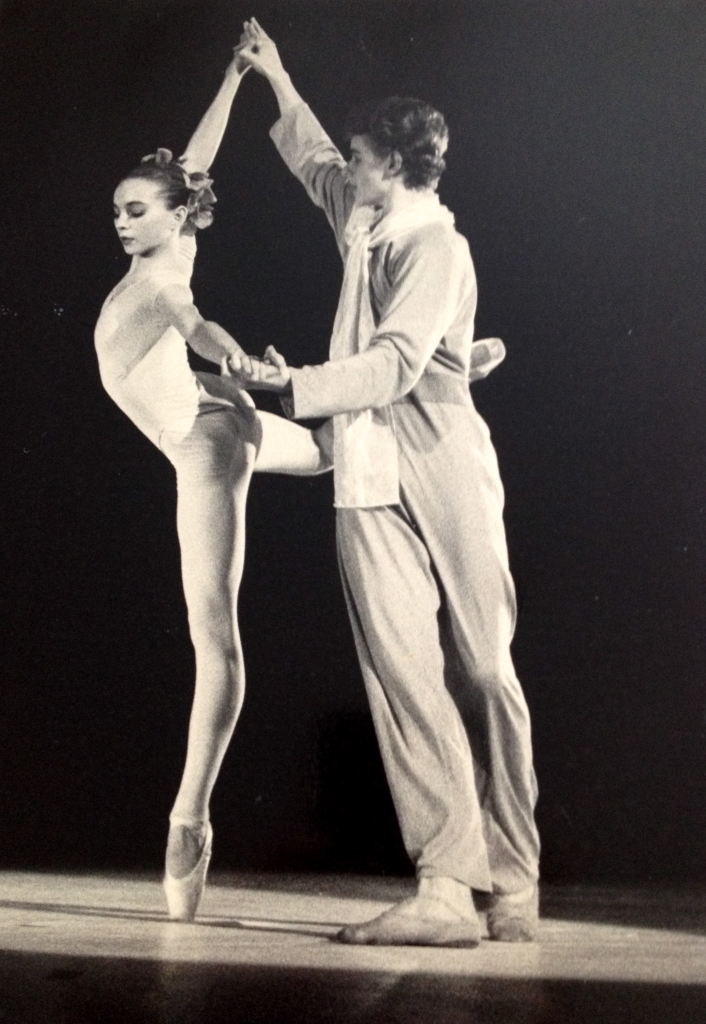 America was a great culture shock, especially landing in the American South for his first full-time job. “I was still learning English and learning new traditions that we don’t have in Europe—my first Thanksgiving, for example. Food was very different too. All in all the culture, the way people interact and communicate…”

At Columbia City, he danced in the corps de ballet some of the time, although he also was thrown straight into major roles like the Nutcracker Prince and Swan Lake Prince.
“I wasn’t ready for those roles,” he says now. “I was way too young.” But “I loved it.”
The very differences and challenges seem to have enchanted him.
“It was escape from Belgium where my reality was being enslaved into becoming a lemming. In Belgium, I could only escape in my head. On the plane, it was the reality.”

“I love flying and discovering new cultures and people and connections. A series of discoveries. Learning about new cultures teaches me about myself. I love discovering through the eyes of others. It puts your life and self in different perspective. It teaches acceptance and openness.” He adds: “I jumped off a cliff a few times, leaving all I knew. From Pittsburgh to South Caroline to Canada to Seattle.” 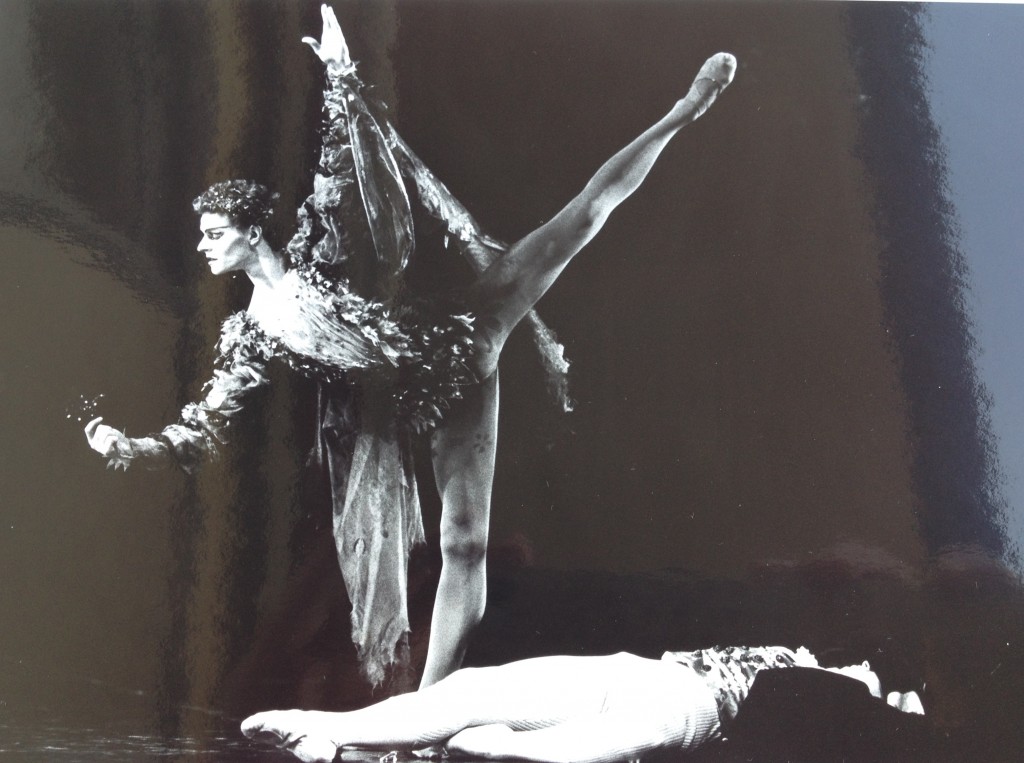 Back in Belgium at the end of the Columbia City Ballet year, there were visa problems with Olivier’s returning there. “I got the job in Canada by chance—a phone call. I had taken a class with the company a few month earlier when they performed in South Carolina. The Director had seen me, and was interested at the time but didn’t have a job offer, until someone left at the last minute, thus the phone call.” The Royal Winnipeg Ballet needed a dancer at once, necessary visa papers were filed, and three days later he was back on a plane.

At Winnipeg, Olivier danced Albrecht in Giselle and the Nutcracker Prince with one of their principal dancers in the first year he joined. He went on to dance other classical roles and in many more recent works. The atmosphere at RWB was very different from Columbia City, SC. His new company “was like its own island, its own little community.” They toured a lot, and he experienced nice hotels and some amazing theaters.” It was mostly great, says Olivier, “but sometimes we had funny situations and new challenges to deal with—one night engagements, long slogs between cities. In one theater the cross-over was through a boiler room below the stage, and we had to use ladders to get back to the stage level. In another, At another, in the Maritime Provinces, the orchestra played behind the backdrop, and we had to weave through the musicians to cross over.” 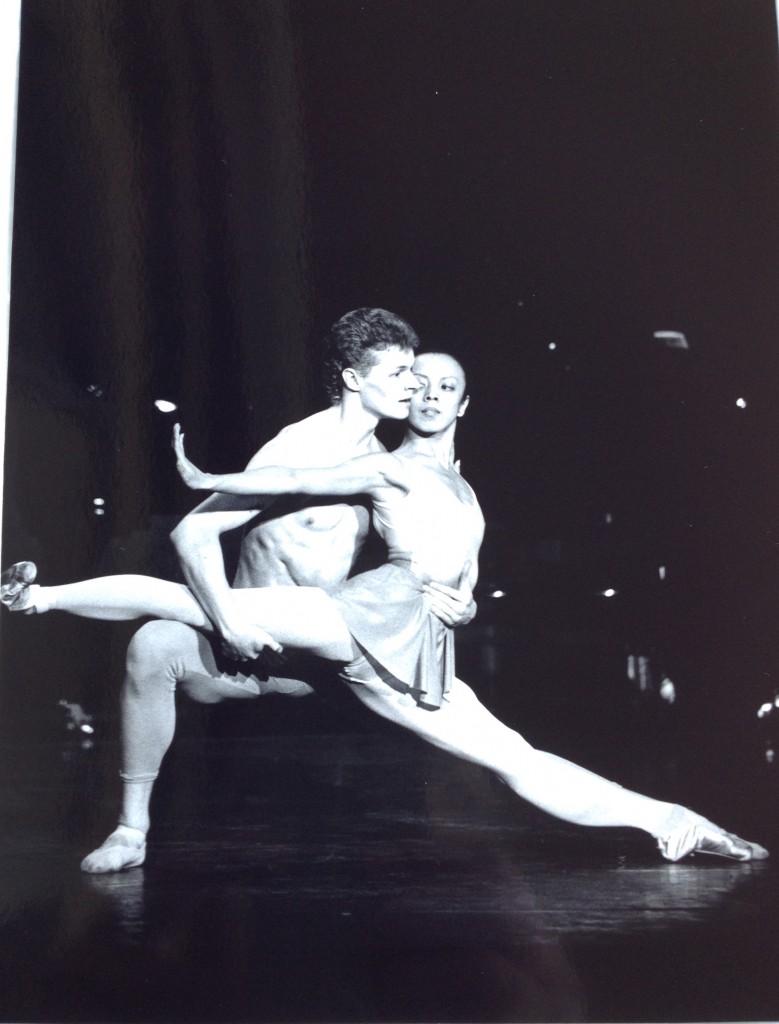 Five years later, the move to Seattle was also something of a leap in the dark. Kent Stowell and Francia Russell had heard of and were interested in Kaori and Olivier but had not seen them dance in person. Scheduling time off to travel to an audition was difficult for the young couple because of their touring schedule. Finally, however, while they were on tour in Vancouver BC, the stars aligned (in more ways than one). The two directors of PNB came up for a performance, liked what they saw, and after the show offered them contracts—soloist for one year, then promotion to principal. And that is what happened. It was PNB’s 25th anniversary season with many premieres and new work for the whole company, a great equalizer.

Olivier and Kaori fell in love with Seattle from the beginning, and here they both remain. A decade and a half passed, but Olivier’s new artistic and personal journeys were far from over. For PNB he danced many and wildly varied roles, learned the construction and poetry of dance inside out, got to know his present husband Lucien Postlewaite, and began to choreograph. 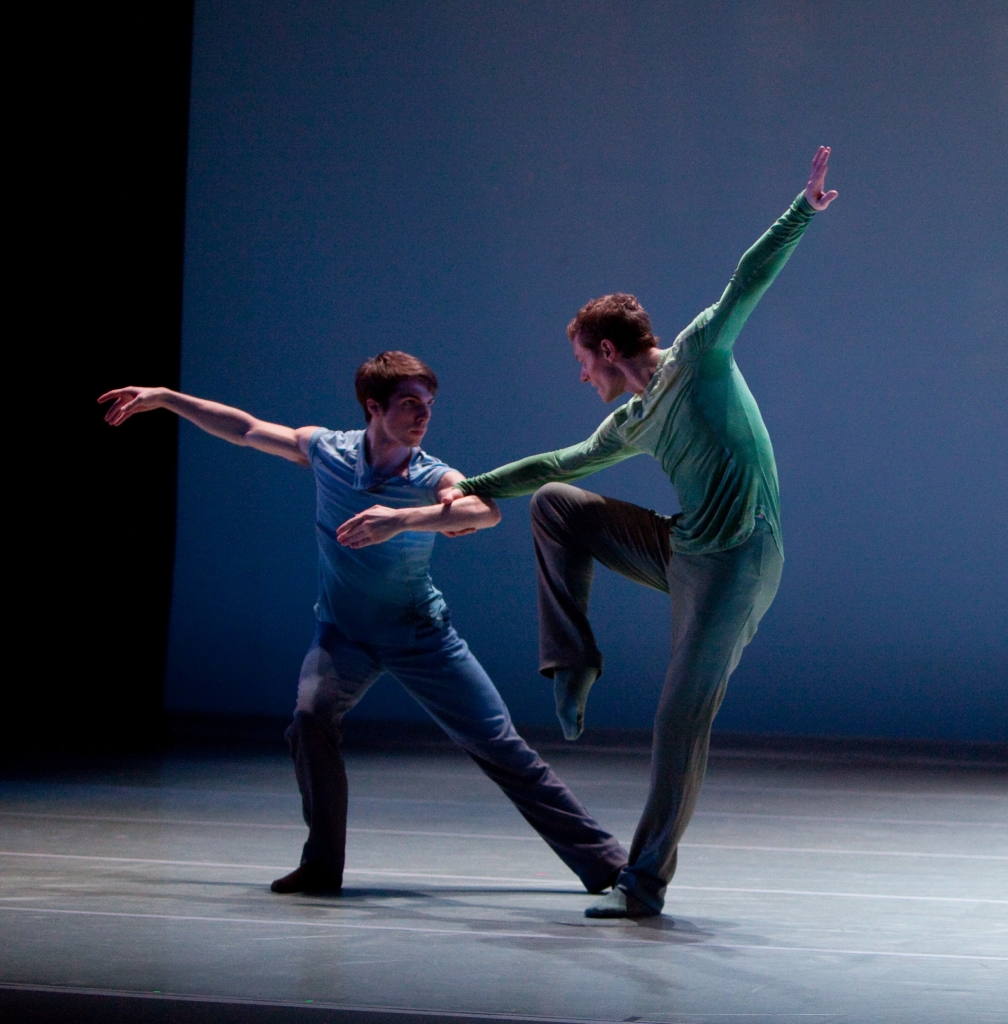 Then in 2009, Olivier started Whim W’Him, launching into yet another unknown as founder and head of his own new dance company.
“Like a cat,” he says he’s been. “Nine lives…
“I keep reaching for the the unreachable star, like the Jacques Brel song*…
“Taking flight.”

*Better known to American audiences from the musical Man from La Mancha.

Next up: Olivier on Whim W’Him and qualities that make a creative artist?

Photo Credit: Image from I don’t remember a spark by Bamberg Fine Art Photography Other photos courtesy of Rita Wevers. For a newly posted photo of the very young dancing Olivier see: www.whimwhim.org/blog/first-steps-olivier-wevers-1.