sharing Third Degree – This is real.

You did it Whimmers!
“Delightful,” “fantastic,” “thoughtful,” “stellar,” “a feast for the senses“—just some of the words lavished by audience members on Whim W’Him‘s latest program, Third Degree. 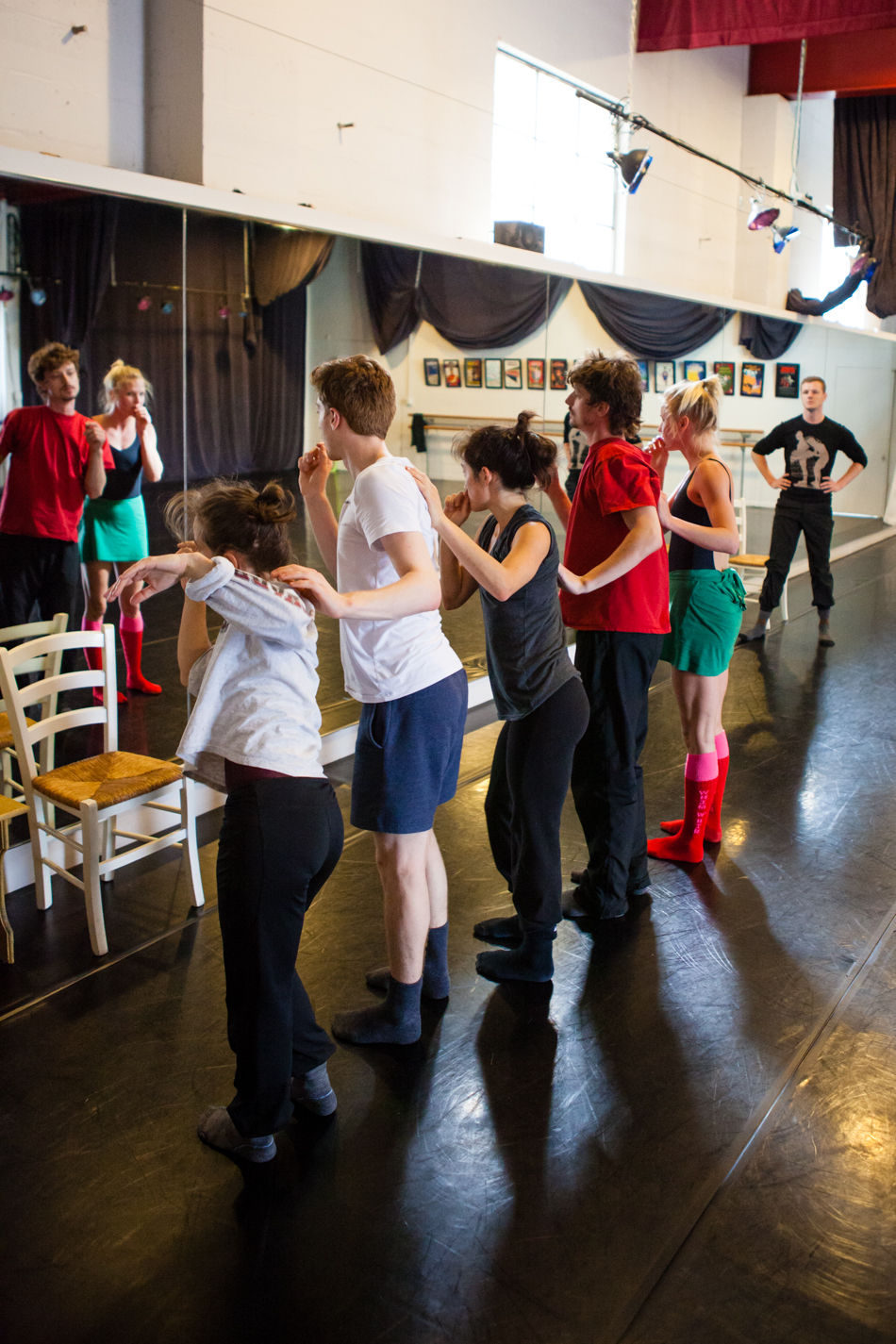 “Aesthetically,” writes Anna Waller in Seattle Dances, “the works in Third Degree fell into two categories: FRAGMENTS and L’Effleuré used classical music (the old stuff, at that) and played with classical vocabulary combined with gestures and a sense of weight that both belong to the contemporary world; This Is Real. and I don’t remember a spark used contemporary music and a more contemporary vocabulary that relies on the depth of precision learned from ballet training. Neither of these categories is particularly new any more, but this should not diminish their relevance in the still-new twenty-first-century (re)conception of ballet. These are some of the new models to work with in the greater ballet world, and they will take hold more and more in this country if ballet is to remain a viable art form. Seattle is lucky to have Whim W’Him not just as an extraordinary performing ensemble, but as a group that fosters new work and further develops a new mode of making ballet.”

The half dozen reviews I’ve read and numerous comments of individual viewers overwhelmingly praise the concluding program of Whim W’Him’s fourth season.
At first I intended to write a general post on reactions to the whole show. But there is too much to cover in one go—favorites among the pieces showcased differ, viewers diverge in their interpretations, and Kim, Adam & Molly of Bamberg Fine Art Photography have taken such superlative photos this time around. So I’ve decided to devote a separate post to each piece—in the order they were performed on May 17-19, 2013.

Which brings us to Andrew Bartee, as choreographer of the first work, This is real. 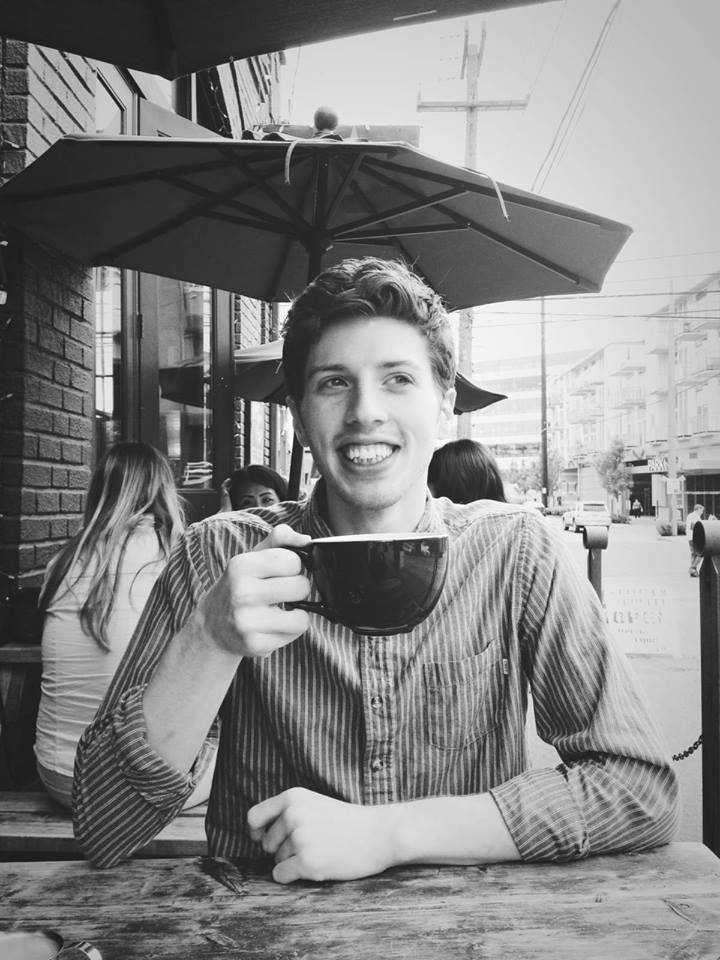 When Andrew still only had a fragment of his latest creation, choreographed for an earlier program, he told me over coffee that he wanted to explore bringing out more narrative in his work. This is real. does that with clarity and subtlety. Although more than one reviewer remarks on similarities between Andrew’s choreography and other Whim W’Him works (mostly by artistic director Olivier Wevers), the overwhelming reaction is delight with the way Andrew is developing, as choreographer as well as dancer. Rachel Gallaher of CityArts calls This is Real. “a mesmerizing, slightly humorous work that investigates social interaction, confrontation, and the confusion of friendship, as well as romantic relationships… Movements range from quick and fierce (running dodging, slicing arms) to slow and sensual, with the brush of a hand against an arm or a leg setting off a graceful, undulating duet.” Likewise, Chris Heide, in Chosen Magazine, writes: “Bartee mixes gritty partnering, inventive technique, a pulsing score and modern technology to effectively weave a relatable, yet controversial tale. This is Real. encapsulates the toxic urgency of a dysfunctional friendship…”

The story-line here is simple: a friendship of two is interrupted by the incursion of a third. But the bond between the two women (danced by Mia Monteabaro and Tory Peil)—as shown in a duet early on and at other moments throughout this ±15 minute piece—is intense, complex, and ambiguous from the start. Are they friends? lovers? sisters? rivals?

This is real. starts with a solo, Mia on her own, giving the impression—to me at least—of a quiet person, not easily bowled over, but capable of strong feelings…

Then Tory Peil enters. She comes across as a more social, outgoing type, strong-minded and with a certain charisma. Their relation, is shown in intricate duets to be by turns tentatively in sync… 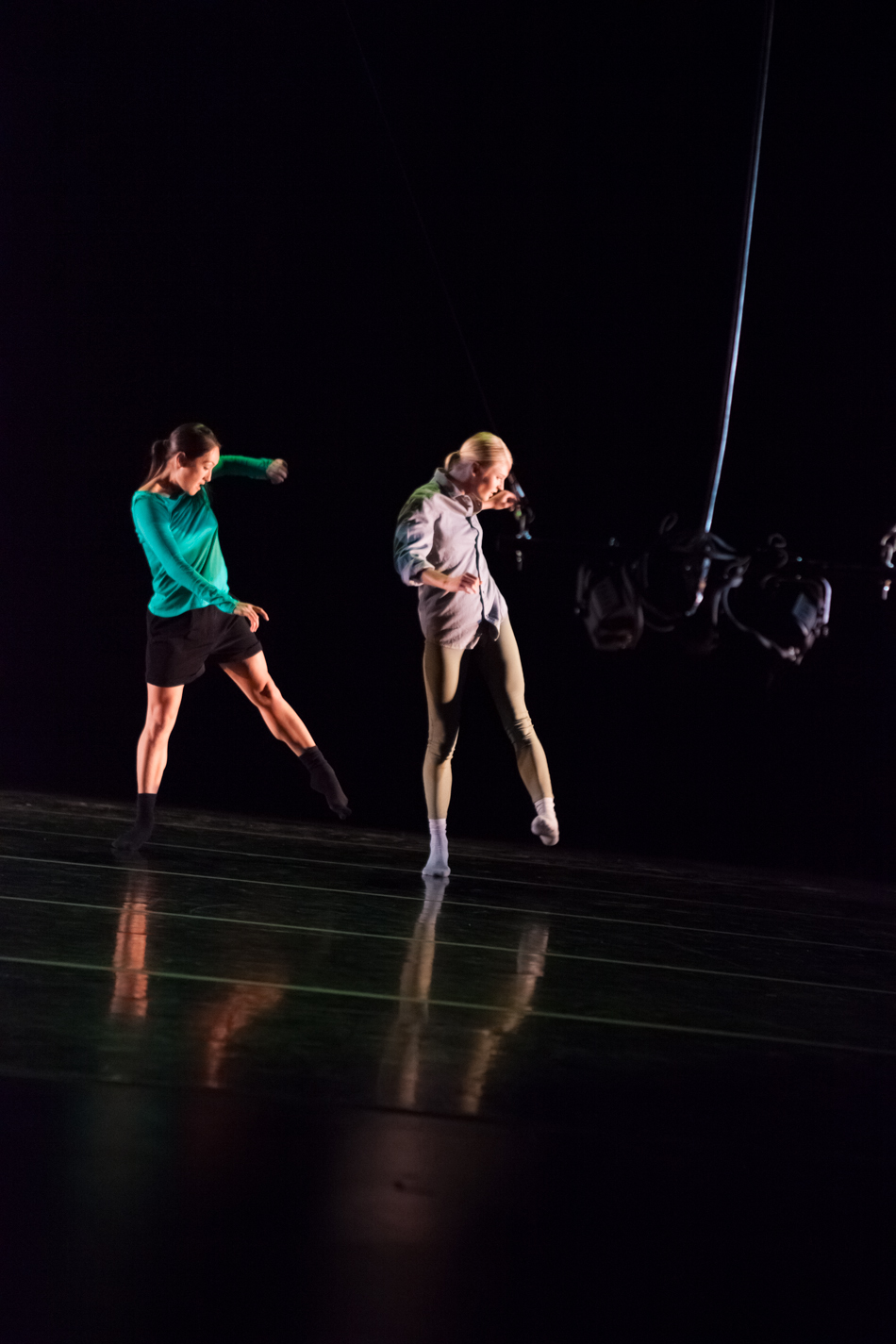 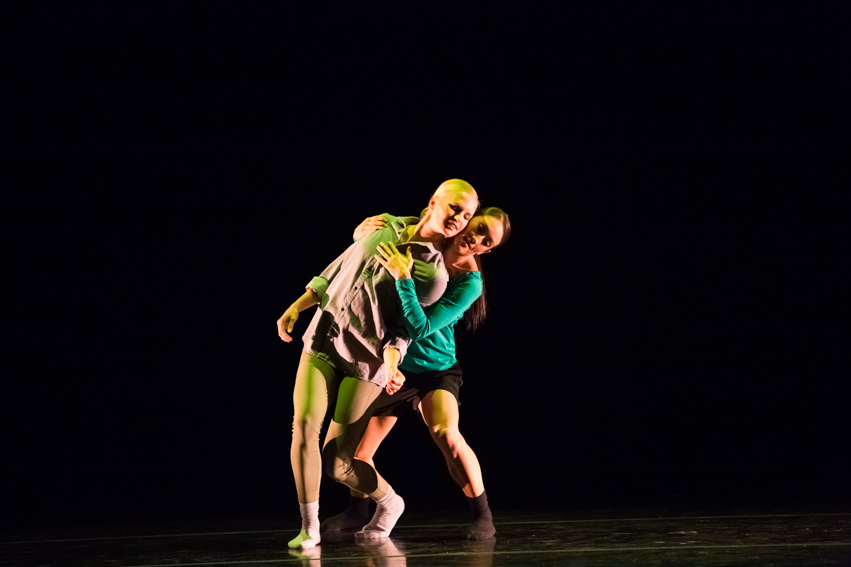 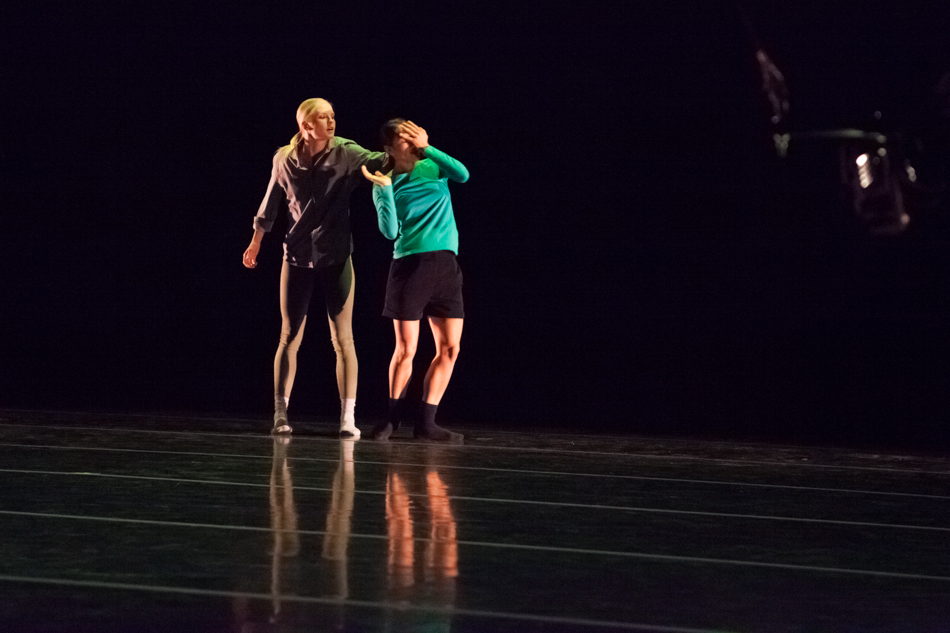 Thus the setup of This is real. makes the entry of the third party, danced by Sergei Kheylik, much more intriguing than if the original relationship was straightforward. 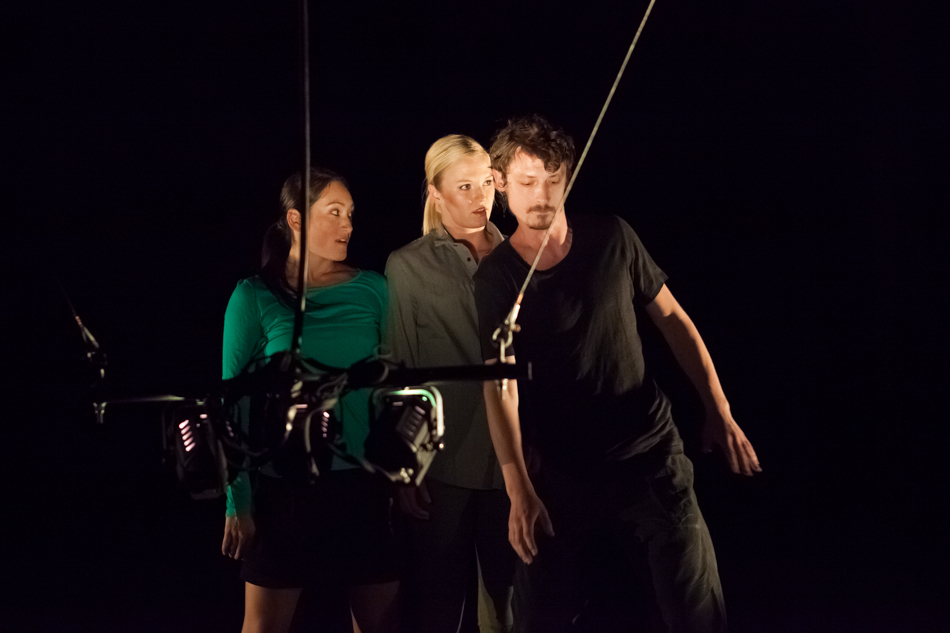 To quote Anna Waller further: “On one level, This is Real. stays in line with a certain branch of contemporary ballet aesthetics—shoulders slightly hunched (so contrary to ballet’s openness), dancers wearing socks, and a tendency toward constant movement. However, the work created a clear world for its three dancers setting out just enough narrative to add oomph to the intricate choreography…. Lighting designer Michael Mazzola’s well-timed blackouts broke the piece into sections, while Lena Simon’s score was quietly unrelenting. The relationship between dancers, light, and music suggested that the audience was glimpsing moments of an ongoing life: a relationship that changes, but never quite resolves.”

Michael Upchurch in his Seattle Times review emphasizes other aspects of This is real.
“The friends, Mia … and Tory, are happy in their tightly synchronized, slightly goofy, occasionally snippety pas-de-deux world—until Sergey Kheylik enters the picture. Kheylik (a terrific new addition to the Whim W’Him lineup) has a cocky, scrappy, alpha-male insolence about him, and both women notice him the minute he assumes his spot onstage. Peil, after a moment, goes for him — and it’s soon obvious that someone is going to end up the third wheel here. But it isn’t always predictable who it will be at any given moment. “Real” is crisply crafted, with a quirky dramatic arc, and some potent partnerwork between Peil and Kheylik as they take turns tangling and tumbling with each other.” 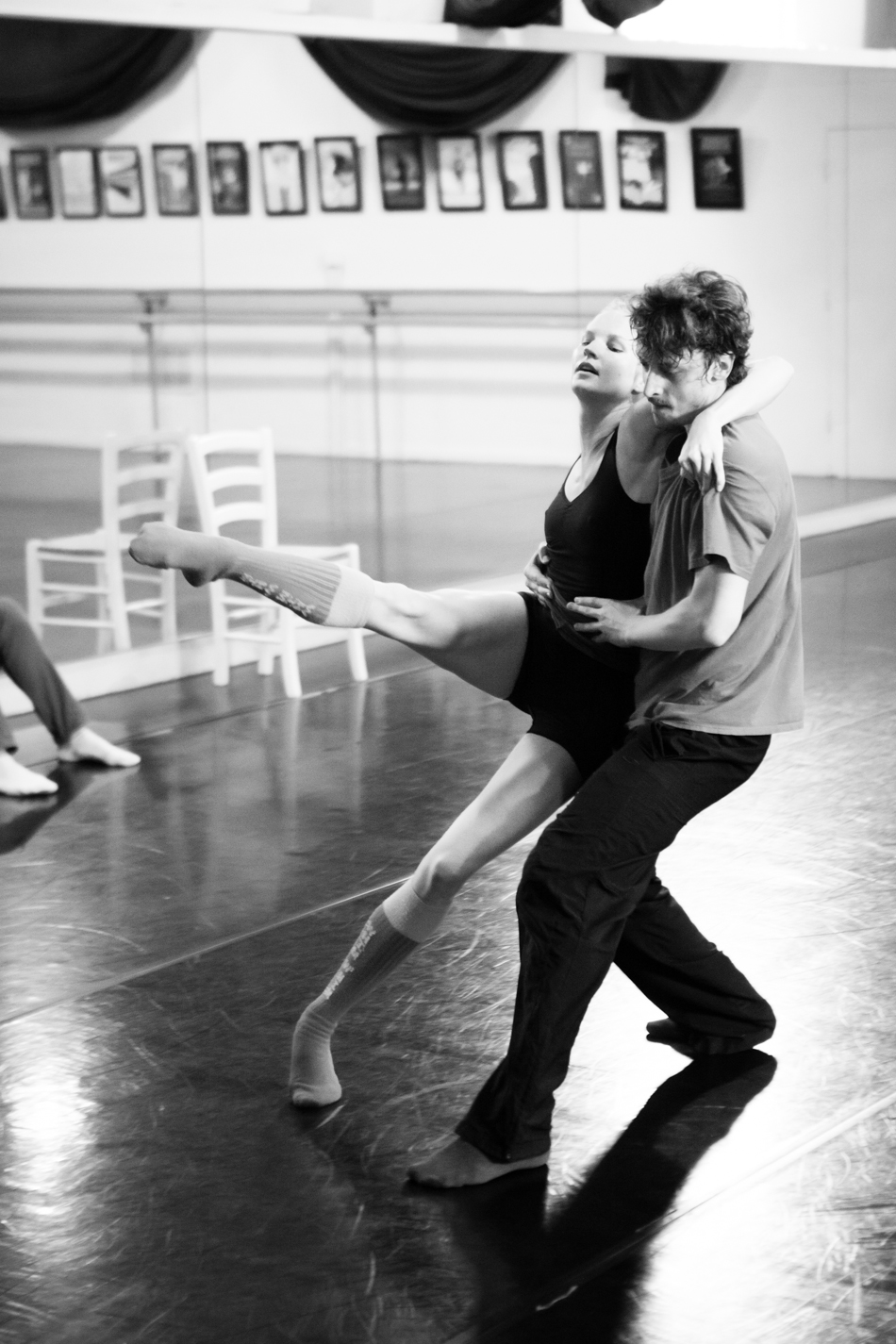 An online comment to the Upchurch review agrees on the value of the piece, but interprets it more gravely: “What struck me about Bartee’s piece is the transparent display of the ugly dark underpinnings of women’s power struggles for a man and for control. It also painfully demonstrated the rejection that women will dispense upon each other as the winner and loser of the power struggle. The intimate space that Mia and Tori worked with is so refreshing in this town, where women do not often dance together. I find it astounding that (in his early 20s) Bartee is so brilliantly able to confront this topic. He has made amazing leaps and bounds in his choreography…. Kudos to Wevers for sharing the spotlight. He is living up to Whim W’him’s mission statement of collaboration. “ 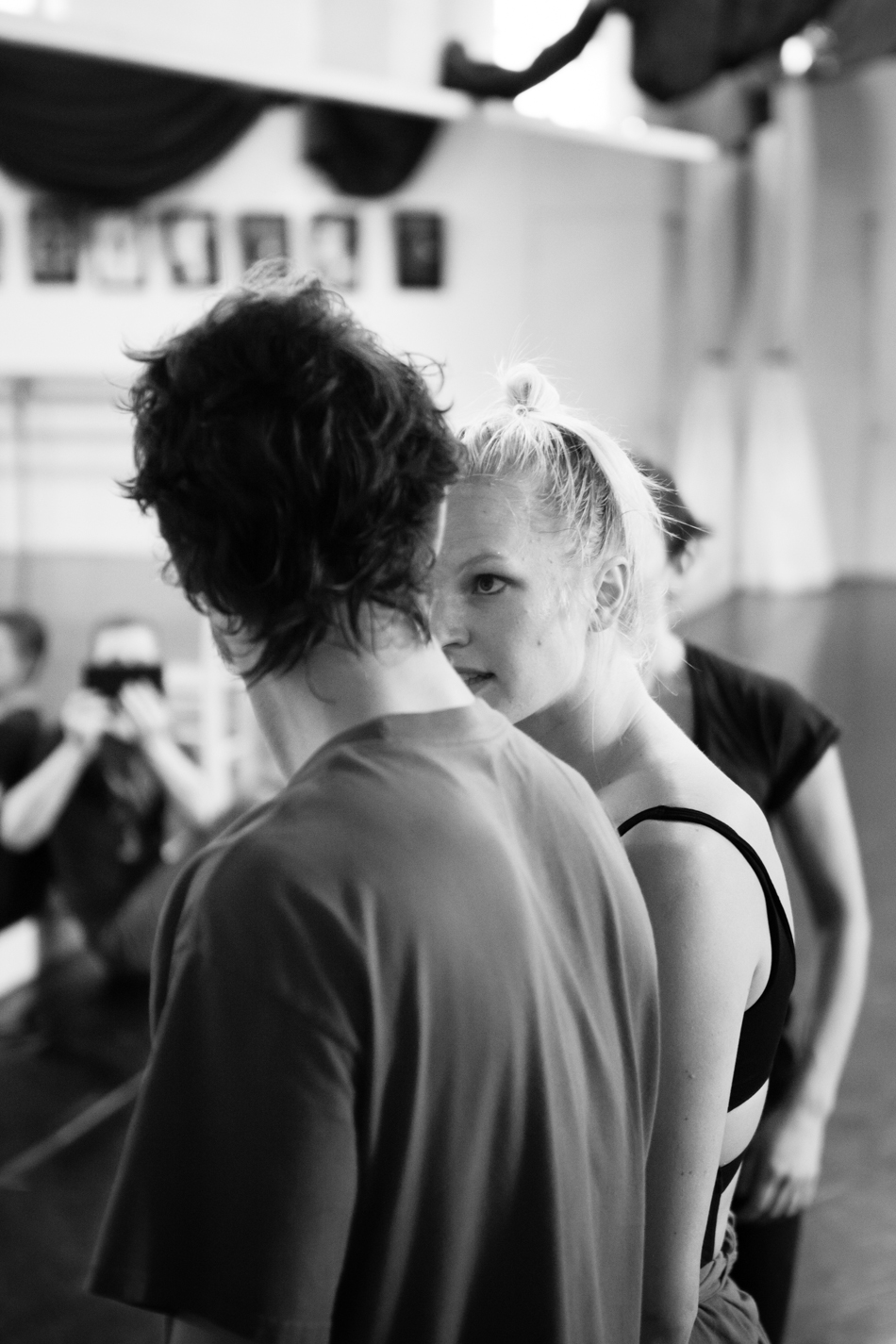