One of the very best things about writing this blog is getting to observe the particular personal style of each choreographer in the studio. Whether she is explaining a concept verbally or demonstrating or “just” watching, Annabelle Lopez Ochoa’s compact and articulate body, intense intelligence, and a powerful sense of what she wants—combined with openness and humor in entertaining new ideas—are always in evidence. “I very much react to what I see,” she replies to a remark about her liveliness of bearing and expression. 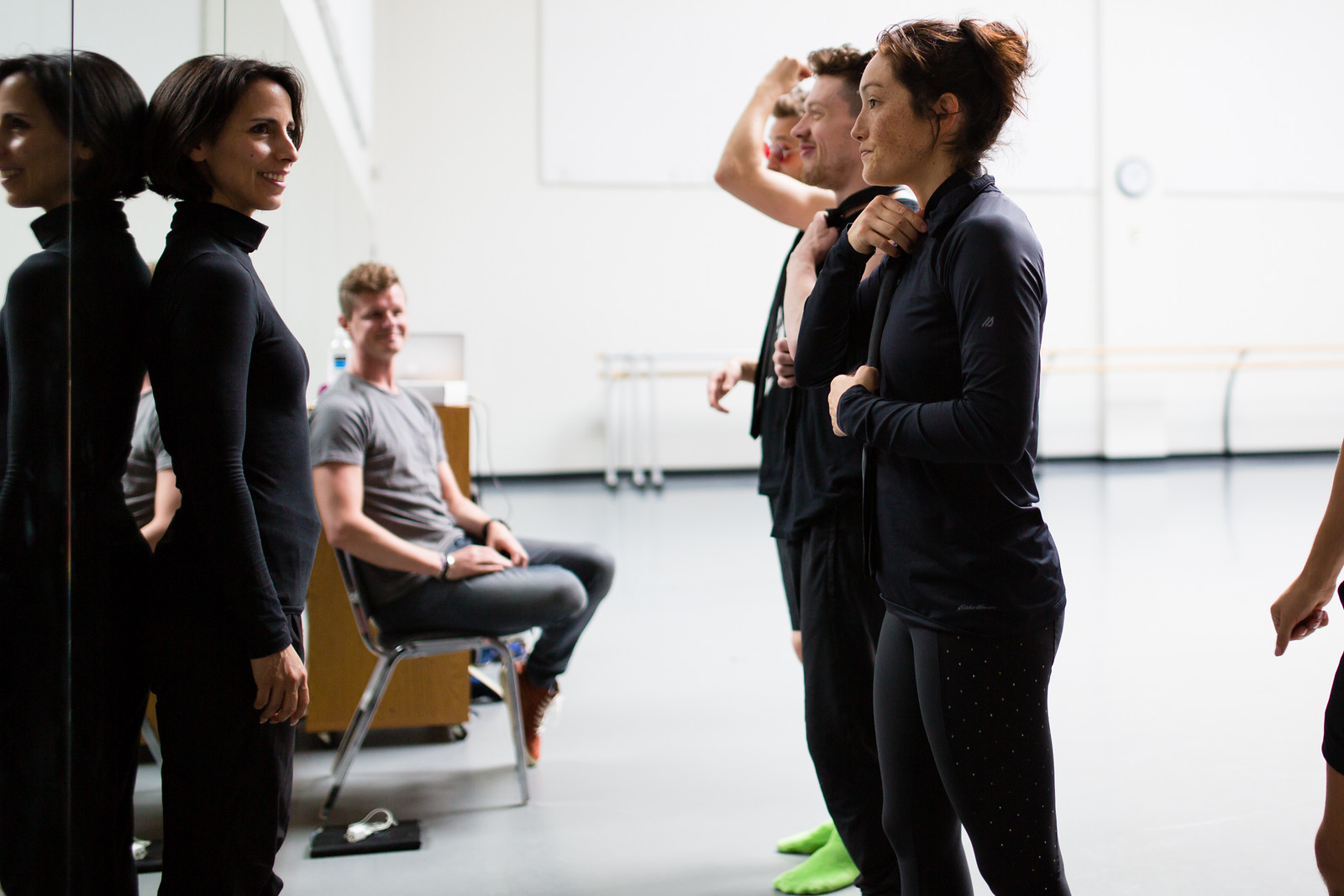 Annabelle is among the world’s peripatetic choreographers. During the two short years since her previous piece (Les Biches) for Whim W’Him, she has made 13 new works on different companies and redone another 7, in the UK, US (Cincinnati Ballet, Joffrey, Daniil Simkin Intensio Project at Jacob’s Pillow), Australia, Cuba, Colombia, Germany, Russia, the Philippines, Chile, and Switzerland. She says, “People ask me, “Aren’t you afraid of repeating yourself?” when she choreographs so many things. “No,” she replies, “because the more I create the less I’m afraid of trying new things out. My aim is not to make a good piece, but to develop a new body language.” 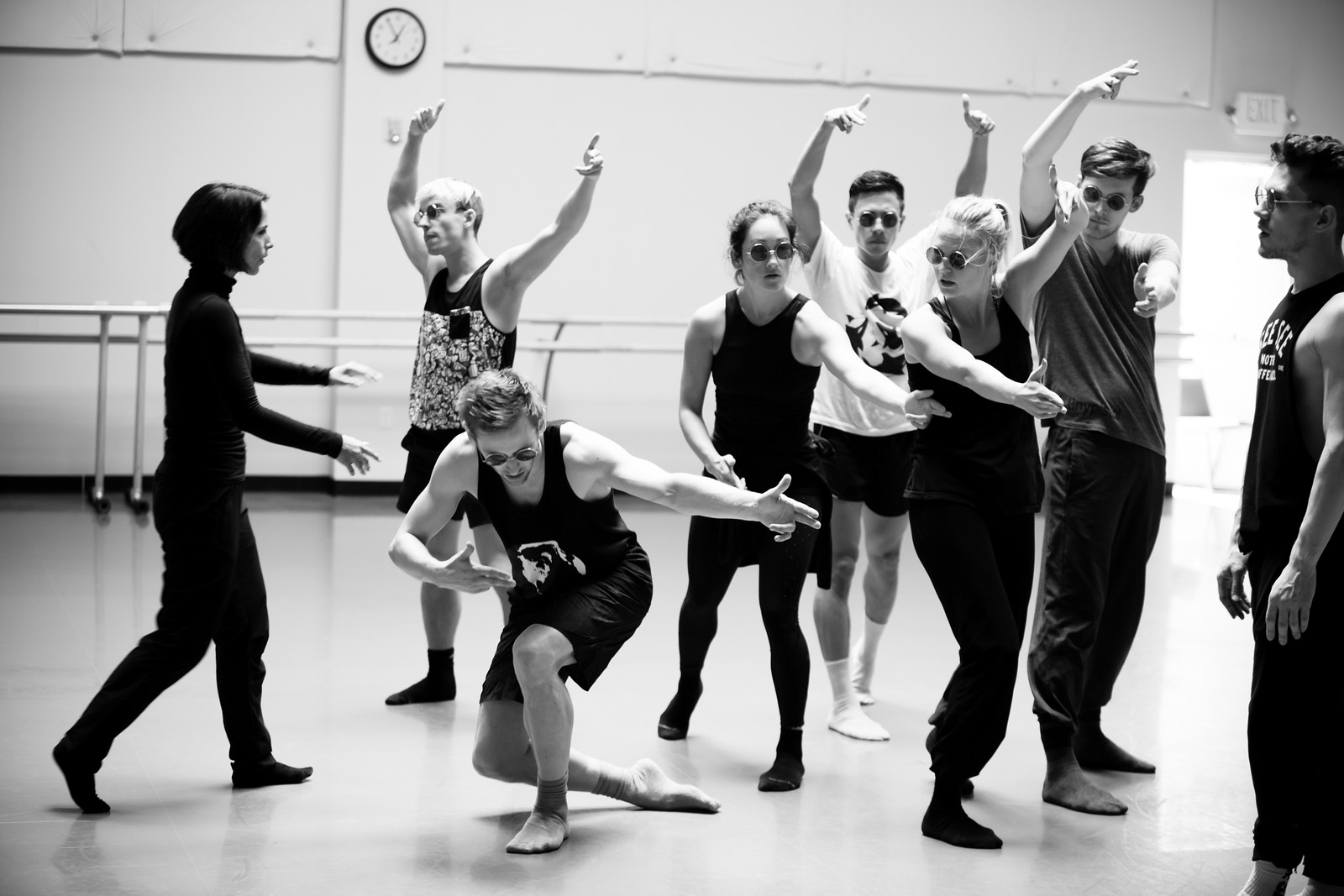 She particularly enjoys working with Whim because the company is “like a laboratory” for her. Some of the ideas from Les Biches, for example, got used in a different form for an English National Ballet piece, while Cylindrical Shadows started at Whim W’Him and later was extended to a larger scale at Pacific Northwest Ballet and elsewhere. “I can try things out here,” she says, “that I wouldn’t do on a big company.” And the Whim dancers are game for anything. 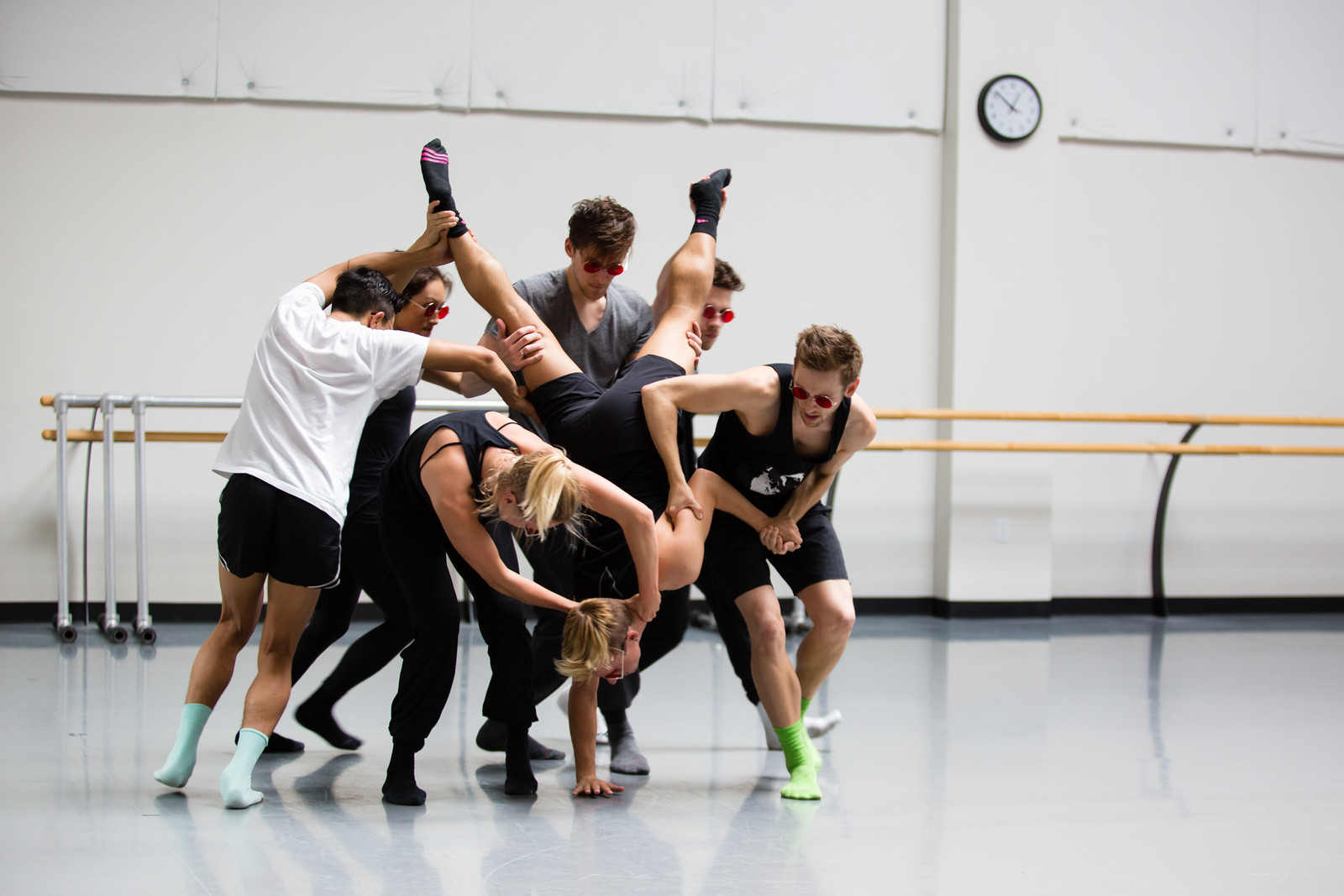 Delicious Pesticides is the title of the piece now in creation. Its seeds were sown some time ago, when Annabelle was planning an evening-length danced version of Pulp Fiction. Ultimately Tarantino’s lawyers refused to let the script be used saying that Mr Tarantino didn’t ever give permission for live performance,” she notes. “But the idea stuck in my head.” Before coming to Seattle this spring, she wrote down some thoughts about it, though “I haven’t looked at it since,” she admits, and “I usually come into the studio with no movement in mind at all. I prefer to prepare images or situations rather than movements.” 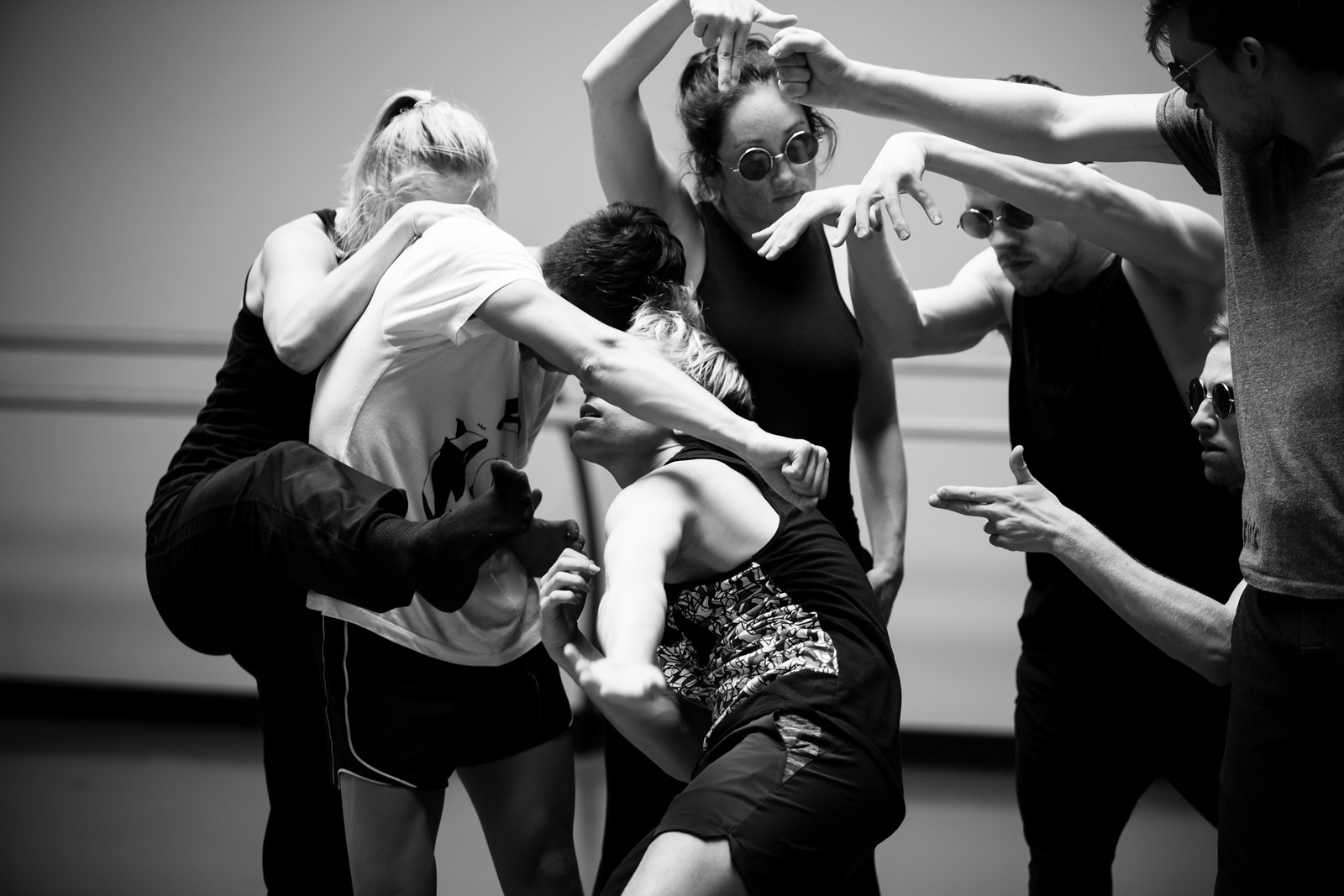 At the start of the first rehearsal with Whim W’Him, after that very short introduction, she goes on to mention a Dutch expression of “insects or bugs as the lowest level on the crime chain. So that’s it. Criminal bugs.” With a characteristic expression on her face—slightly sly, as if she’s relishing observing her listeners’ perhaps disconcerted responses—Annabelle glances around at the company, smiles broadly and says, “Okay, so let’s play.”

Under the influence of the images in her mind’s eye, she directs the seven dancers in a brief sequence of roiling motion, where they wind tightly in among and around, then freeze—all pointing finger guns or daggers at each other. In the next instant, they recede back into their individual bodies and stand for a moment, wriggling their fingers, “like how flies move their hands in front of their faces. Feelers always moving—it’s their way of sensing.” 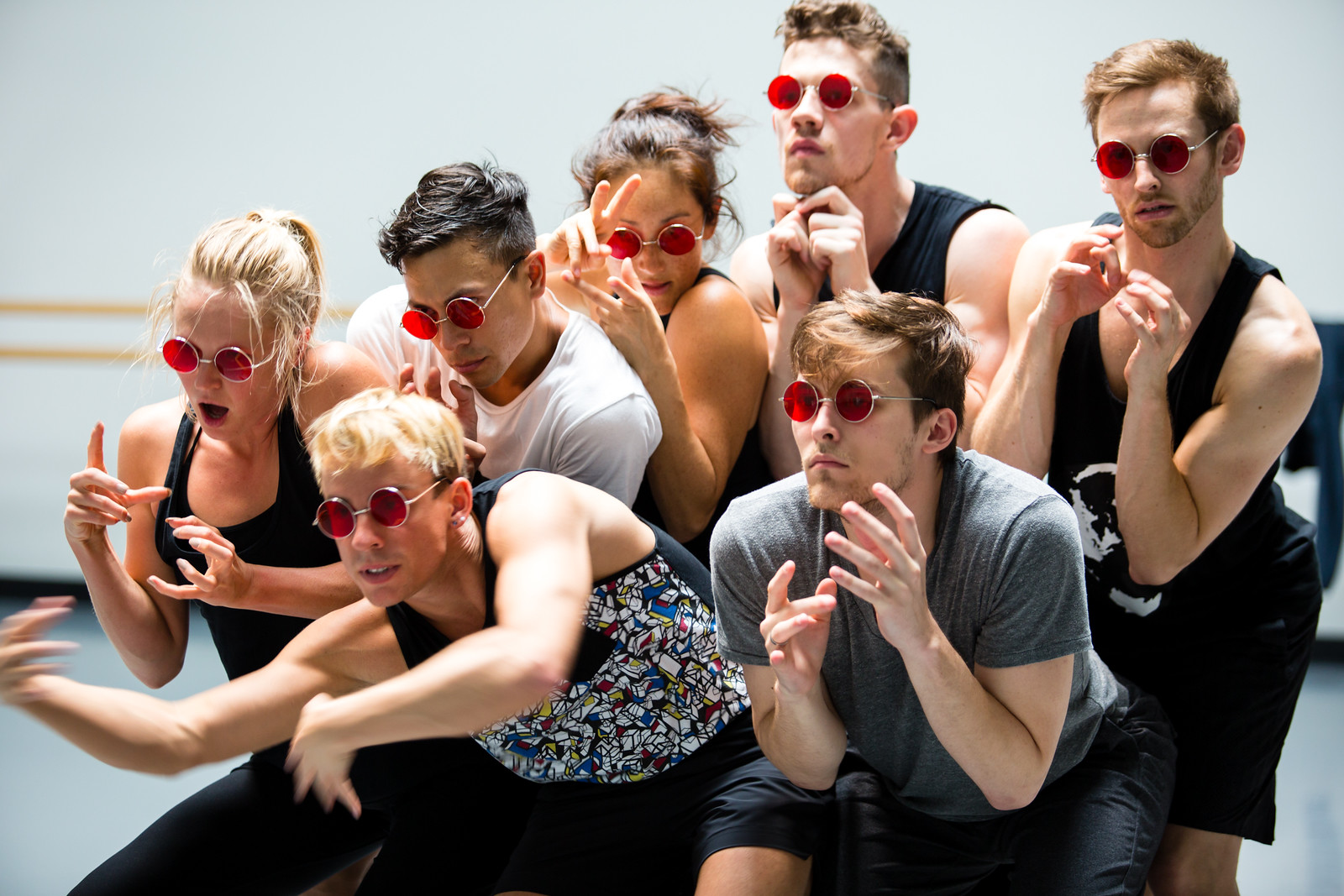 Three times this stop-motion pattern is followed, with different halt-poses, to curious effect. Especially after Annabelle hands out pairs of red-lensed glasses to each dancer—“they are hard to see through, they distort perception, so we need to rehearse with them”—the atmosphere of this little sequence is both thoroughly comic and genuinely sinister. “Insects don’t have an ego,”Annabelle told me later. “They work together like one organism.” 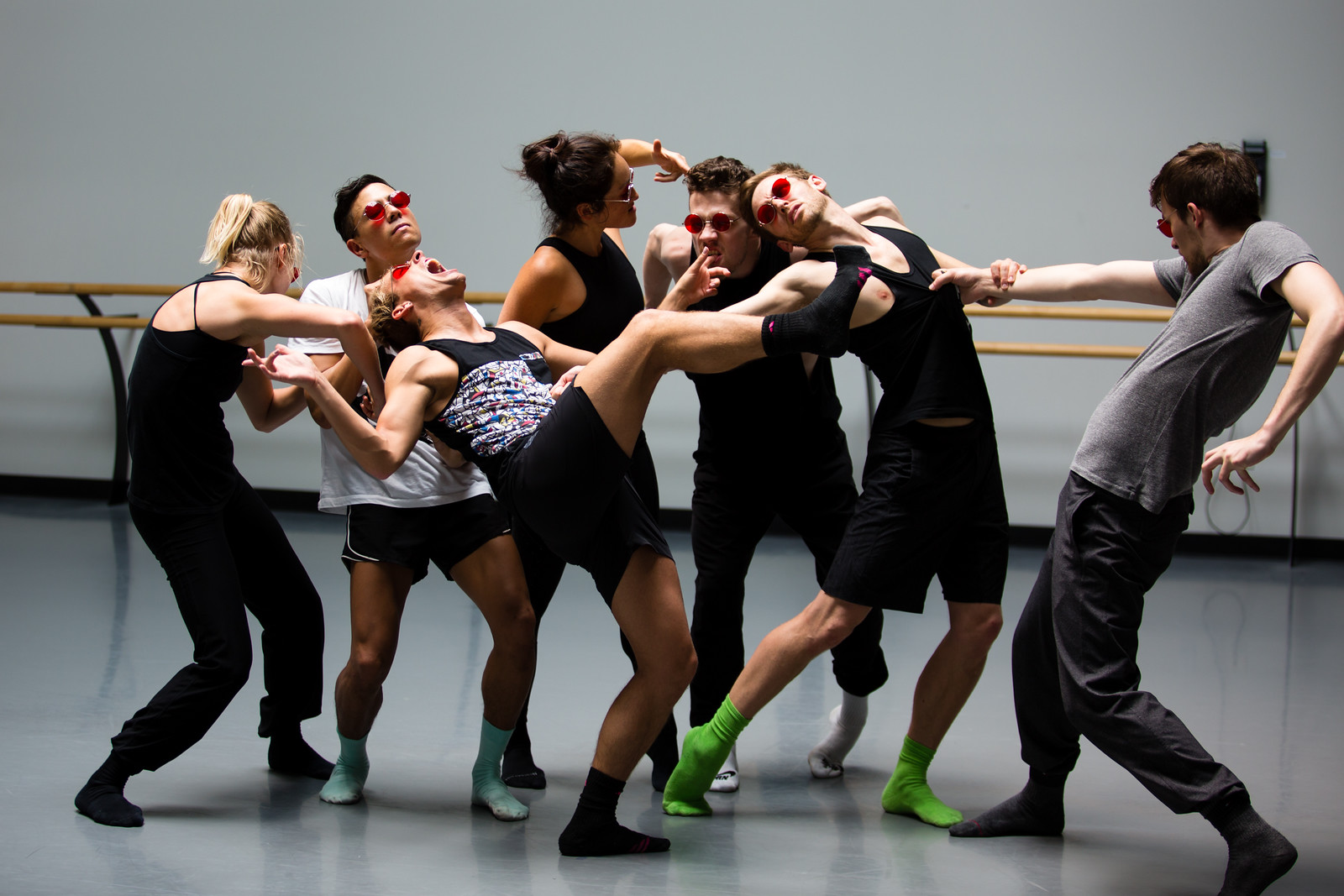 And that’s how it goes through the choreographic process, with Annabelle “looking for the language of how insects move, tortured, with elbows and wrists,” all full of angles. The piece was originally to be just for the company’s five men. But after assuring herself that the two women could become simply creatures, with nothing feminine about them, Annabelle decided to set the piece on the whole company, especially after she heard that James Gregg’s piece will only use two dancers. 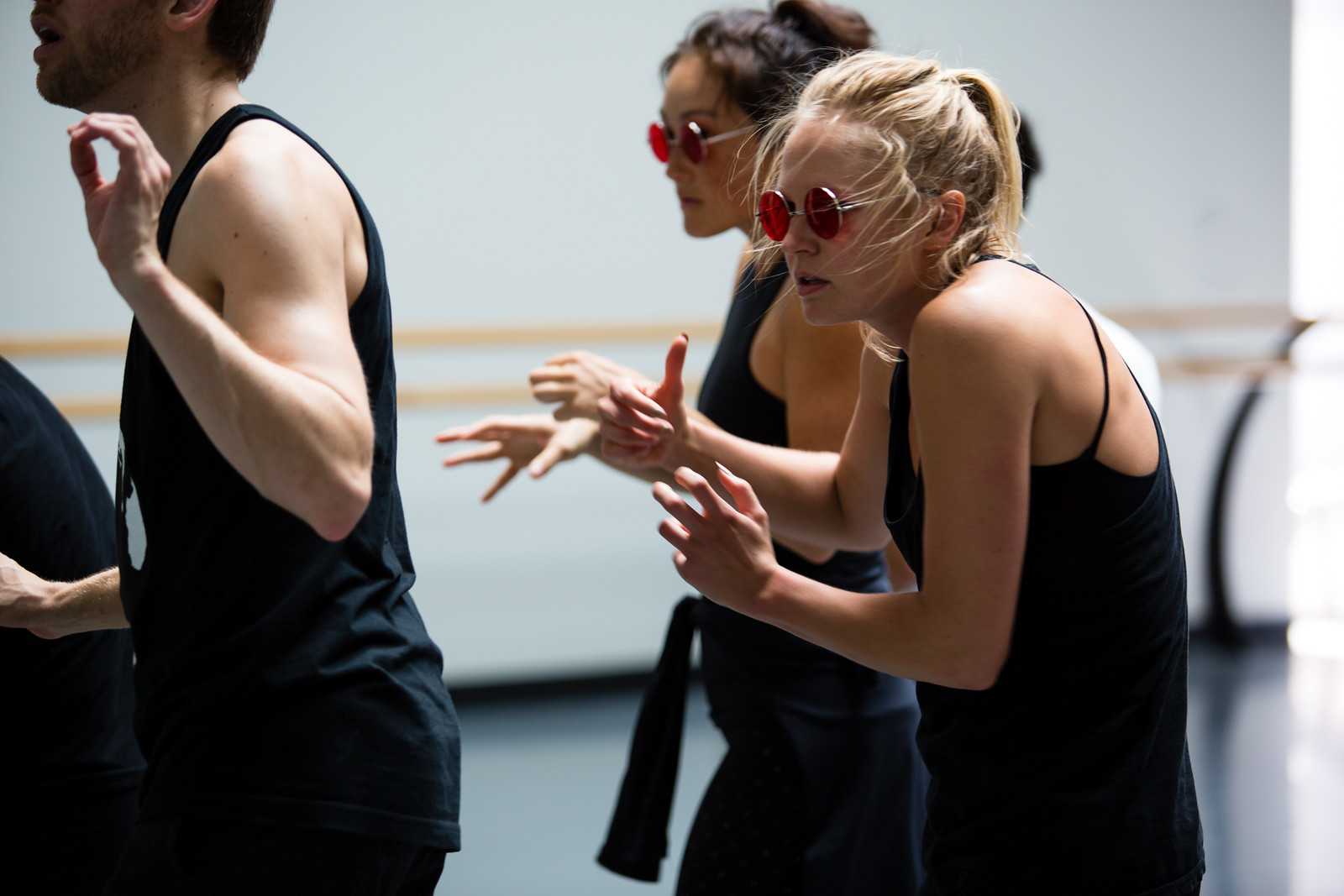 “I have no idea about lighting yet,” she says, but she’s eagerly waiting for sketches from costume designer Mark Zappone, to whom she sent a lot of images of insects. Already neckties are part of the mix—in illustration of the petty criminal/roach idea of suaveness in cheap black suits, say, or as a hangman’s noose. “Trying to look cool, but so uncool. Taking money from big criminals who don’t want to dirty their hands.”

Delicious Pesticides “is not autobiographical or personal, but experimenting on themes I haven’t seen yet in dance,” Annabelle adds. “I don’t think the piece will make any sense—it’s “absurdism, absurdity, funny—but there have to be some characters, a theatrical feel to it.” And that is what is being worked out in the studio now, seeking something akin to a Tarantinesque atmosphere in which inhuman creatures are prey to human-like feelings, to grotesque, if perhaps poignant effect. 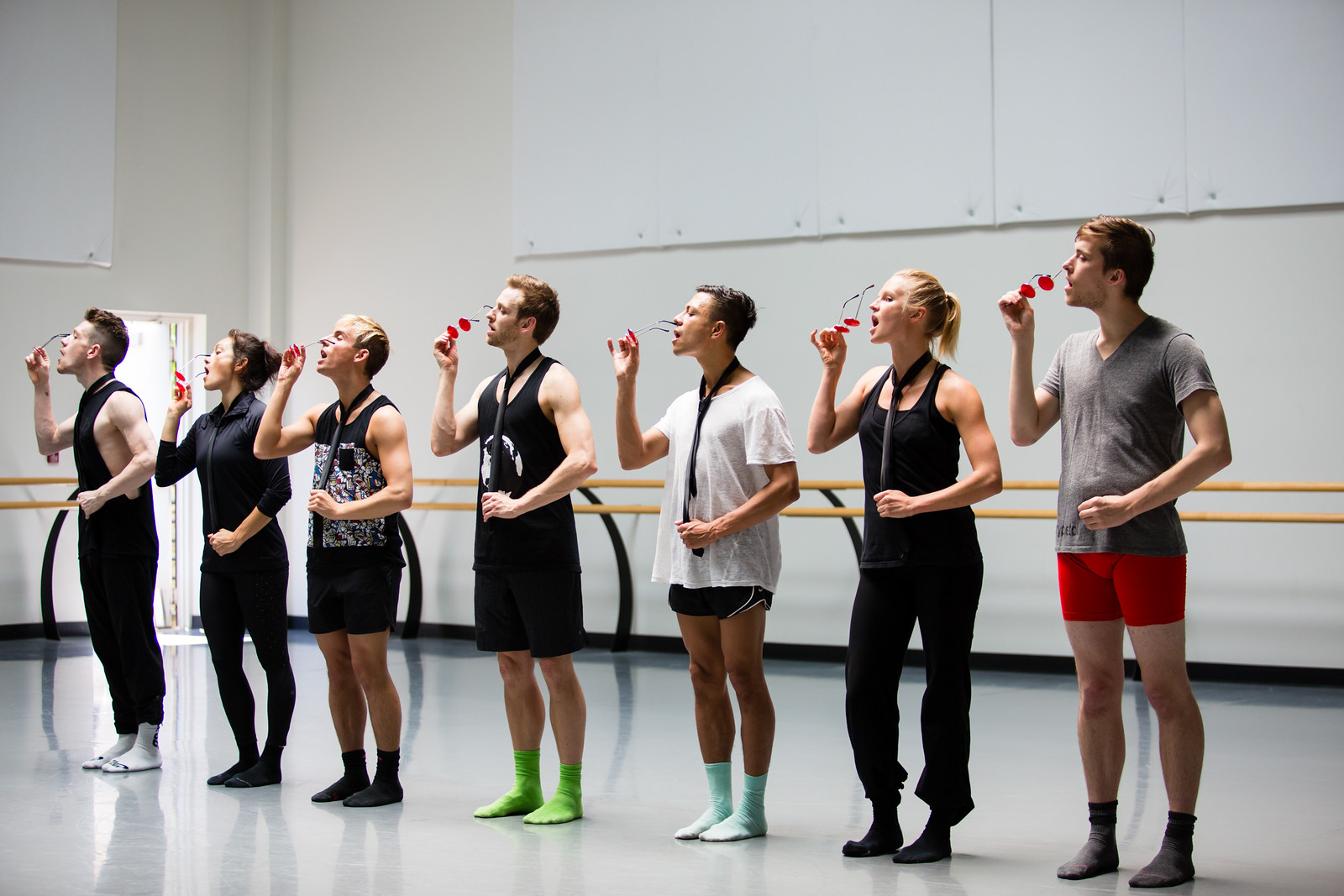 In conversation out in the hall, not wanting to pry excessively into how her work comes into being, I say maybe it’s time to stop talking about the piece for now. “There is a tension before creating and discussion or letting the process be known,” she answers. “It feels very private, like asking about making love to your husband.”

“What an absurd undertaking it is to write about dance at all anyway!” I exclaim.

“Writing this is fine

[for the blog],” she replies, “if it’s on the making of the piece, not what it’s about or why—what the red glasses mean.”

There’s a little pause as we each think our own thoughts.

‘We all challenge ourselves,” Annabelle concludes, “as you said of your writing about a gestural art that shouldn’t be written about…’ 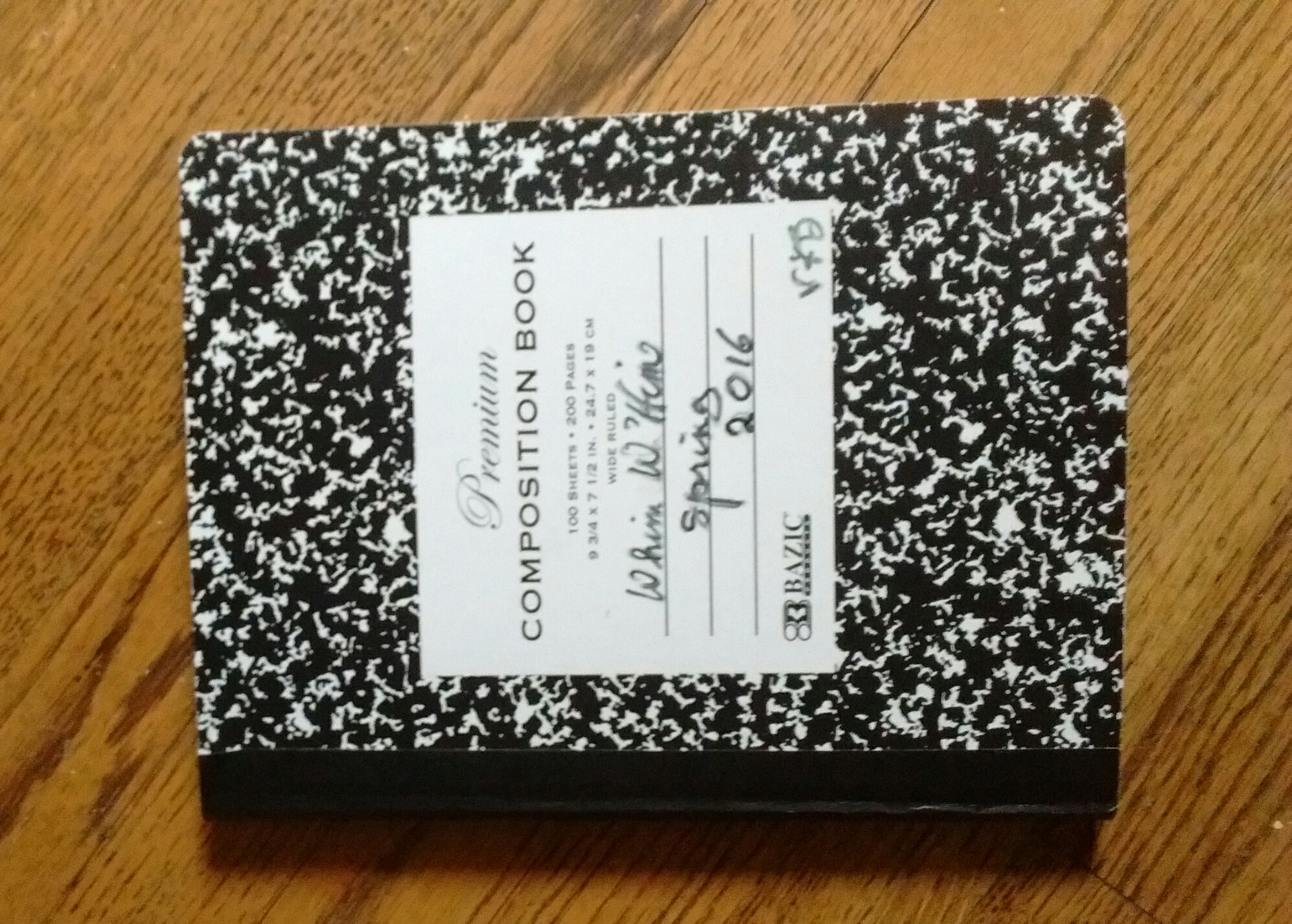