Thursday update: Just before the start of yesterday afternoon’s rehearsal, Casey Curran badly cut a thumb in the line of duty. He got a skin graft and has a huge bandage now, but is on the way to recovery. All our good wishes for a full and speedy one!!!

Approaching Ecstasy (May 18-20 at Intiman Theatre) is a rather different project for Casey than the last Whim W’Him project he was involved in. 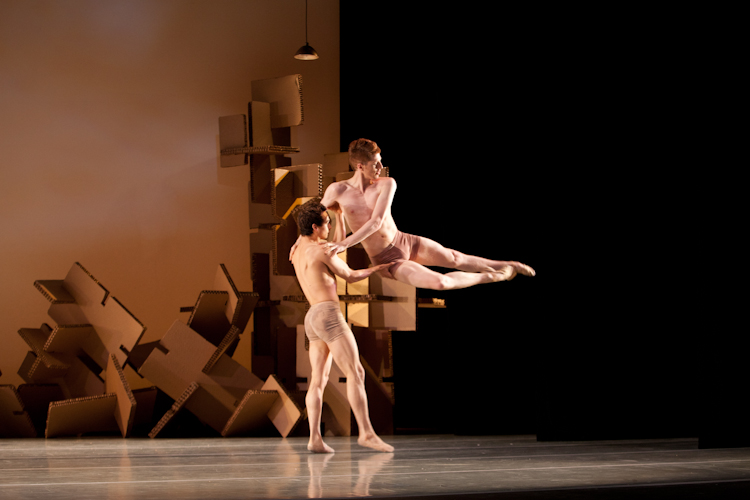 For the second iteration of 3Seasons, in June 2011, he made a series of large cardboard shapes, like a giant children’s construction set. Heaped up in different configurations for each performance, they allowed a lot of scope for Casey’s quirky and inventive creativity in their arrangement.

For Approaching Ecstasy, Whim W’Him artistic director and choreographer Olivier Wever‘s requirements are highly specific. The puzzles Casey has been working to solve are more mechanical and practical than imaginative this time around. There are some tricky technical issues.

Three sorts of structure are involved: 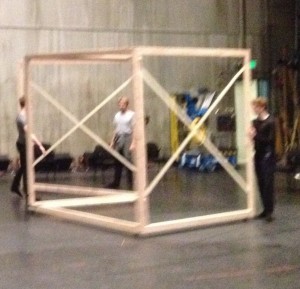 The challenge here has been to construct a series of four vertical 8′ by 8′ frames, hinged to each other on the sides, so they could line up in a row or form a book-shape, a diamond-shape or a square box; roll around the stage easily, changing configuration as they move; and be either opaque or transparent, depending on how they are deployed?

Originally, Olivier’s idea was that there should be three of these boxes, each 10′ by 10′. Given the forty singers( with chairs) involved in this production, along with seven dancers and the need for open movement space, dimensions have shrunk by two feet each way and the number has dwindled to one. In the event, what is lost in grandiosity of vision is gained, I think, in coherence for the dancers and focus for the audience.

The single shape-shifting Box has to play a variety of roles in the different vignettes that make up Approaching Ecstasy. Technical questions include: how to hold the sides together, so they will be strong, but the relationships between them easily changed: how to lock The Box in a true square when needed, yet be easily opened.
At Tuesday night’s rehearsal, the present latches didn’t work well because the wood, especially of the outer two wings, had warped since it was painted. The wings also tended to torque when moved. More L-brackets will be needed and a firmer, easier way of shutting the box devised. Velcro, magnets, different latches? “Oh, I’ll work something out,” said Casey.

The color looks good, the naked wood now a subtle gray that well complements the dark suits, light grayish back wall, and different grays of the marley dance floor and protruding apron. But the most notable new aspect of the completed box is the biodegradable construction grade plastic—the kind used for fences, greenhouse walls, and in green houses—that is used on the two hinged wings. Vertically striated, it picks up light in fascinating ways and appears, as Whim W’Him board president Katie Bombico noted Tuesday night, as if it’s fashioned out of long parallel strings.

On Wednesday, the day of Casey’s accident the rehearsal was spent almost entirely on Box choreography. Olivier, who seems to have a quite uncanny sense of the vectors of large physical objects in motion, was training the dancers to wheel the opening and shutting, stretching and contracting Box through its paces. They rehearsed until it moved as smoothly and seamlessly as its human fellow-performers. 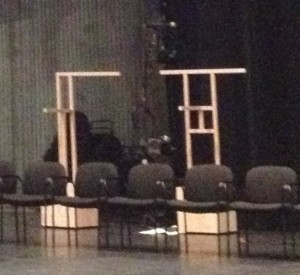 There are six of these identical, sturdy cubes on casters, now painted in the same gray as the box. For the design of their upper sections, though, Casey was able to let his imagination loose a bit.
The Mannequins need to be highly moveable and to serve as a variety of different props in the course of the show. When the dancers put on or take off clothes, The Mannequins act as clothes trees, and at times they become part of the dance. but in their first incarnation, the casters were too noisy when they rolled along the stage floor. Tuesday night Casey said he’d stuff the wheels with something to muffle their sound. 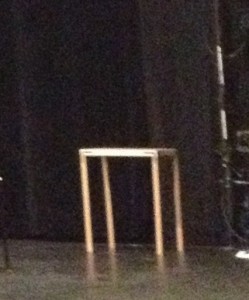 In a poem, called ‘With the touch of his hands,’ Andrew Bartee manipulates, gets inside of, slithers through, vaults over, winds around a table, in ways you’d not imagine possible—for either man or object. The obvious parameters here for Casey were that the table had to be smallish and light enough to be slung about and twirled on one corner, yet sturdy enough to be sat upon and leaned against at all sorts of odd angles.
It has to wear its reinforcements lightly. Luckily Andrew, used to heavy lifting as a ballet dancer, had no trouble with a few pounds added to make stronger legs on the table, but while it must be far tougher than it looks, it needed to retain its skinny, seeming flimsiness of appearance. The result is a tour de force in motion. 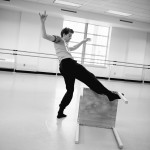 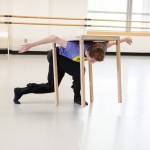 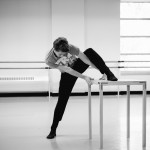 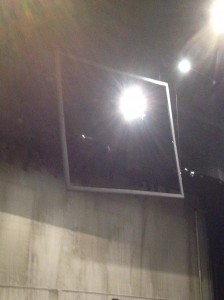 A huge glassless mirror frame, flown in from above at an oblique angle, has to break, then reconstitute itself, for the poem “In the Vestibule.” This sequence of events was, still is, as Casey remarked last night, “an engineering nightmare,” to pull off. There are hinges at strategic spots, so that it can collapse inward, but making it do so silently and on cue is no mean feat. In the next day or so, precise logistics of how/when that will happen have to be ironed out.

This will be a dramatic, even startling show. Together with the stark concrete wall that backs the stage, sometimes lit up with enigmatic shapes of light; the dark suits worn by singers and dancers alike; and a subdued lighting palette, Casey’s deceptively simple set pieces invoke a sense of societal rigidity, of external objects imposing limits and hemming the poet in. Each of the large props for Approaching Ecstasy is linear, sharply angled and painted in somber tones, to set off and contrast with the curvilinear forms of the dancers, as they exult, anguish, and drift on all-too-human memory.