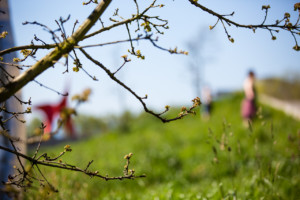 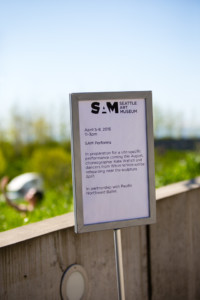 All the way back in April, Kate Wallich—who has done two other out-of-theater works, one at the sculpture park—told me she was very excited and enthusiastic about this project and its potential both to attract younger audiences (Kate’s specialty) and to foster partnerships. “Dancing in an outdoor environment changes things a lot for me,” she said. 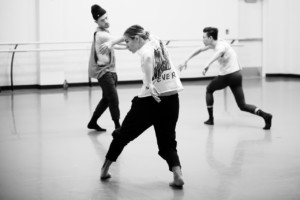 Movement that works in the bounded, controlled space of the studio “doesn’t translate to the outside,” where, in the present case, the stage is a wide, bumpy, sloping, triangular field, with walkways on all three sides and a busy street along one edge. “No pirouettes,” says Kate, looking amused. “Structure, organization, and relationships rather than the movements,” are what count there, what she calls “every day choreography.” Her usual movement language “can’t be done outside—the movements themselves—except that the structure, etc. is also part of my language.” This particular field changes over the months as well. During the first outdoor rehearsals, in April, the field was grassy with a few California poppies. By the next rehearsals a month or so later, the grass had grown much taller and was also laced with purple-blue, yellow and white wild flowers. But in August during the performance this coming week, the field will be dry and yellow. Each stage of the outdoor stage presents its own charms and challenges. 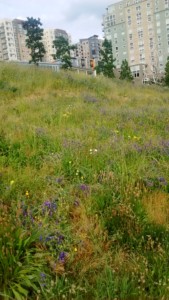 But more technically challenging steps are precluded not just by the difficulty of the setting. They are also made less attractive to the choreographer by way the audience will perceive the piece. During on-site rehearsals in that beautiful, warm week at the beginning of April, passers-by didn’t necessarily realize what was going on. That may be the case during performance as well, when joggers, walkers, pairs caught up in earnest conversation, might cross the scene oblivious. The environment impinges in other ways, in each instance, from an oreo cookie handed to one of the dancers rehearsing by a watcher to hay fever allergies flaring up and a bee sting on Mia’s eyelid. 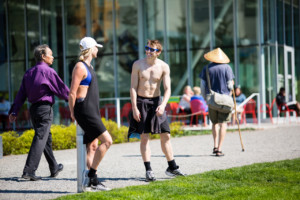 And all that, along with the street sounds of trucks down-shifting on the steep hill, and the rumble of long freight trains below, becomes part of the meaning and intention of the piece, which Kate watches “from many points of view,” so she knows how it reads in each direction. “The background is the street and the cityscape,” she adds. “Use it all. That’s why

[Whim W’Him dancer] Tory [Peil] starts way up high. Many levels and angles and points of view to see it from.” 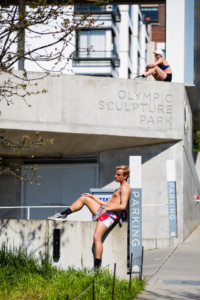 Different images for the several separate sections of this new work were developed in the studio, always keeping in mind that they were just sketches to be filled out in situ.. “In the park,” Kate notes, “we found transitions.” But by the time of the open rehearsal on Tuesday, May 24, during which 4 of the 5 pieces in the program were shown, the movement had been pared down even further than in April. Before the latter rehearsal Whimmer Jim Kent told me, “A lot of the movements have been taken out” since April. “Why?” I asked. “Because of the high grass?” “No, it’s because of the sculpture, our relation to it. That’s what this is all about. Kate has become not so interested in the movements as the space and distances. It’s her severe choice, and I respect that.” 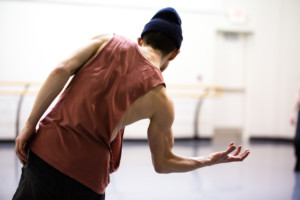 The sculpture to be featured in this piece—whose eccentric title is Little Bunnies or Response to Roxy Paine’s ‘Split’—has the precisely the grace of a natural leafless tree, except that it is constructed entirely of shiny silvery metal. 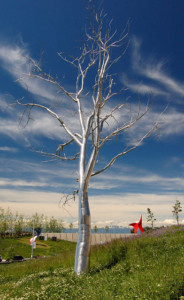 “Doing something like this outdoors has humor as part of it—funny. There’s humor in my work anyway,” Kate notes. “It’s natural to find this in working at at sculpture park.” And there’s humor in the making of it too. In what was being called the ‘Martha’ section (after Martha Graham), Kate found the dancers were way too close together in the park, which led to her spreading it out over the big space and the section being called ‘Dispersed Martha.’ The ‘Unicorn’ section for Justin Reiter and Jim worked well in the studio. But ‘in the actual grass, it looked dumb,” Kate says frankly. “So I said, ‘just walk.’ It translates better.’ 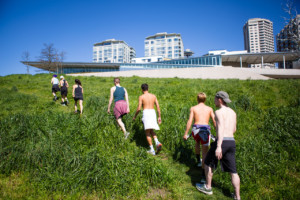 The problem of tall grass and the shape of the hill changed a section called “Picnic.” A sort of nesting sequence under the silver tree, where the dancers originally churned around together like a clutch of hatchlings, was changed to have the dancers lift up each of their number in turn, so they could be seen. Now, “From some angles it looks as if the dancers are floating above the grass. From others, there is a sort of entanglement of bodies and limbs.” 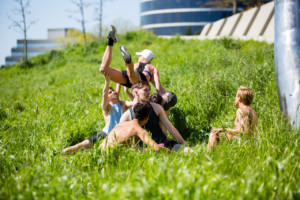 The dancers will all be in white. White jeans, white hoodies, white tennis shoes, she hopes. Under the tree is an all white picnic scene—blanket, basket, maybe milk in glasses. The whole thing will be done in a loop, as will all the pieces of the Sculptured Dance evening, with breaks in between, so there is a flow to the whole and one can see the entire program, all the pieces. 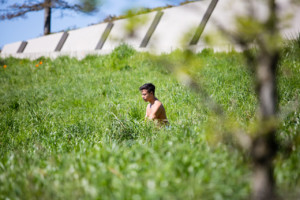 Music. At first Kate didn’t want any at all. At the rehearsal this week she said her ideal music would be a limousine pausing on its way down the hill by the field, blasting Beyoncé and ambient park noise. At the May open rehearsal, in the course of the various pieces, there was a long drawn out train whistle, car, plane and helicopter noises, bird song and people talking. But at the same time, says Kate, “It’s become a meditative, imagistic piece and half way through [the week before the first outside rehearsals], music became the idea of running with jam boxes, my desire to be part of the performance and something to push the piece along.” 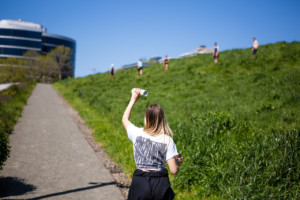 The piece is 15 minutes long. The dancers, all in white against the grass green, will show up even from quite a distance (I think of how big swans appear on a salt-water pond seen from far away where my family vacations,). We talked a little about the spectrum—from the node of total concentration and foreknowledge and wholeness of what the piece is to the dancers inside of the performance, to outside, where the audience is watching or not or taking it in as just part of a whole scene. At any rate, Kate says of her piece, “I hope it’s visually stunning, near or far, beautifully imagistic…” 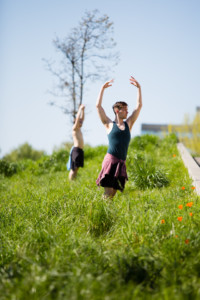