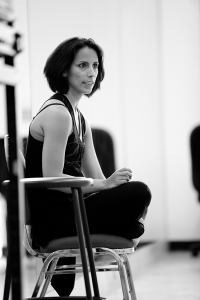 Hair flopping over her eye, brimming with energy and talking with lively precision, Annabelle Lopez Ochoa teaches Cylindrical Shadows to dancers of Pacific Northwest Ballet. Two+ casts are learning the piece. Since its premiere last January at Intiman Theatre with Whim W’Him, Annabelle has made a variety of changes.

As I watch she shapes, corrects and experiments in the big studio at PNB.

“So we’re going to do two hops here.”
She steps forward to show what she has in mind.
“Long arm, but very light—not too extreme and long.”
“Hm, so how to you get out of there? …Let’s do two of those.”
She demonstrates.
“Now if you don’t move out away, you can go around each other like this…
“C’est ça.” A brilliant smile. “Ho, I like it.”

For now Annabelle is just giving the dancers the movements. She has only told them a very truncated version of the theme: There is no difference between life and death; they are not opposites, as we are taught to believe. They are both part of a single continuum, the continuum of life.

The dancers are working without music at this moment. I can see it getting better and more together with each repetition. As always, I marvel at the quickness with which professional dancers learn.

Then, when the music is played, the movements fit amazingly well. Surprising little individual riffs surface out of the calm, even piano music.

Later, as we are eating lunch after rehearsal, I ask Annabelle how this second version will compare to the original done last winter.

“My challenge,” she says, “is to forget about how it was before. If you start comparing, you lose. You have to not repeat, but see past what is there to make something new.” She adds, “It’s a luxury to have all this information to transmit,” but because there is not the necessity to research it all from scratch, the creative process is “less intimate.”

Instead, you need to expand on the already existent material, take it further than it went before. There is a continual play between changeablility and universality.

“It is never a reproduction,” she says. “Every time I aim to that it doesn’t work. Of course, some moments will be lost, but the piece will become richer.”

So how has Annabelle used the differences of situation to broaden and reimagine her piece, “to turn limitations into opportunities”? What changes has she built on?

The McCaw stage is considerably larger than Intiman’s, where the piece originated. Dancers will be further from the audience, above those in orchestra seating, far below those in the higher reaches of McCaw Hall. To fill the space and reach out to the larger audience, the cast has grown from six to nine (two more men and one woman).

For example, before there were two girls. In their duet the movements were slow, but in a bigger space they can’t be slow for too long. Thus, the duo is becoming a trio, its dynamics more varied. Likewise, the trio of two men and one woman is being expanded to five dancers. In neither case can more dancers just be added. The whole balance and complexity of the sequence must change and develop.

Only Andrew Bartee and Lucien Postlewaite remain from the original cast of the men, and with the exception of Kylee Kitchens, who served as ballet master and learned one of the parts until Melody Herrera could come from Houston Ballet, the women are all new to the piece. Olivier, serving as Annabelle’s assistant, was one of the original dancers, while PNB ballet master Anne Dabrowski is notating the movements as they are created.

In a big company and with added dancers, there are more people to get to know. There are injuries, conflicting schedules, personality disjunctions. And with a second version of a piece, the knowledge doesn’t grow automatically out of the creation process. It is essential to find ways to engage the dancers emotionally so that the piece draws on and benefits from their individuality of talent and style. Annabelle waits until she is in the studio with the dancers to shape new steps. Letting ideas arise out of what she sees unfolding before her, she invent or tailors special movements and sequences for each dancer.

The costumes for all three women are being redesigned, their construction and dyeing overseen as before by Christine Joly de Lotbiniere. The garments will be longer, more fluid than the original ones. Annabelle is very pleased. The two extra men’s costumes will be of the same style as before, but add tones of orange, gray and blue.

David van Bouwel is composing an extra minute of music, a small amount in duration but with the extra dancers and new choreography, it will add a further essential dimension.

Once the movements have been learned, Annabelle will fine-tune the pieces, and Olivier Wevers and Anne Dabrowski will work again with the dancers before the performances next spring.
Since the rehearsals in Annabelle’s first week of rehearsing with PNB, I’ve been away from Seattle. In an email the following week, she wrote: “CS is coming along, actually this week it seems everything is ripening and maturing. It’s beautiful to see. It is also nice to get to know the dancers better.

“We had a shoot yesterday for the videoclip of CS. We shot it on three different locations in Seattle. It was a lot of fun and I’m very curious to see the result.”

So are we all!