rehearsing – with The Esoterics

A two-part, 24-member choir is disposed in two rows, 12 facing 12, across the rehearsal hall. Onstage they will be positioned along the sides where the wings would usually hang. Throughout the 90 minute piece, these two dozen singers will sit on chairs (loaned by co-sponsor Roy Street Coffee and Tea, who provided the background for the ensemble’s lavish photo above) that are more or less in the 1920s period of Approaching Ecstasy.* Another, 16-member choir will stand at the back or wander between the 7 dancers, the seated singers, the string quartet-plus-harp, composer/conductor Eric Banks, and various set pieces.

(Below are two sketches of the stage, one from Olivier, one from Eric, who says “neither is exactly right, but it’s fun to see the process.”) 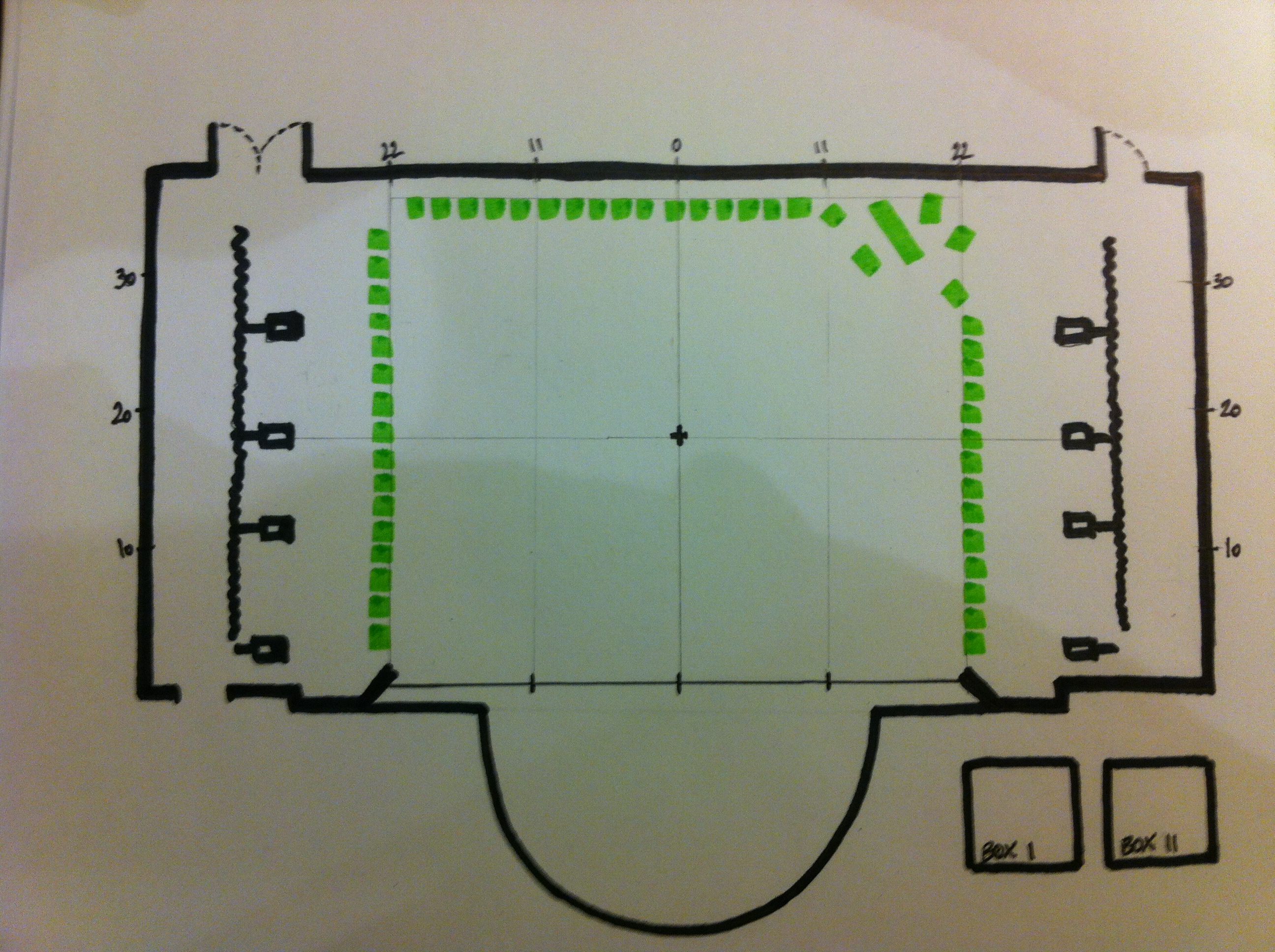 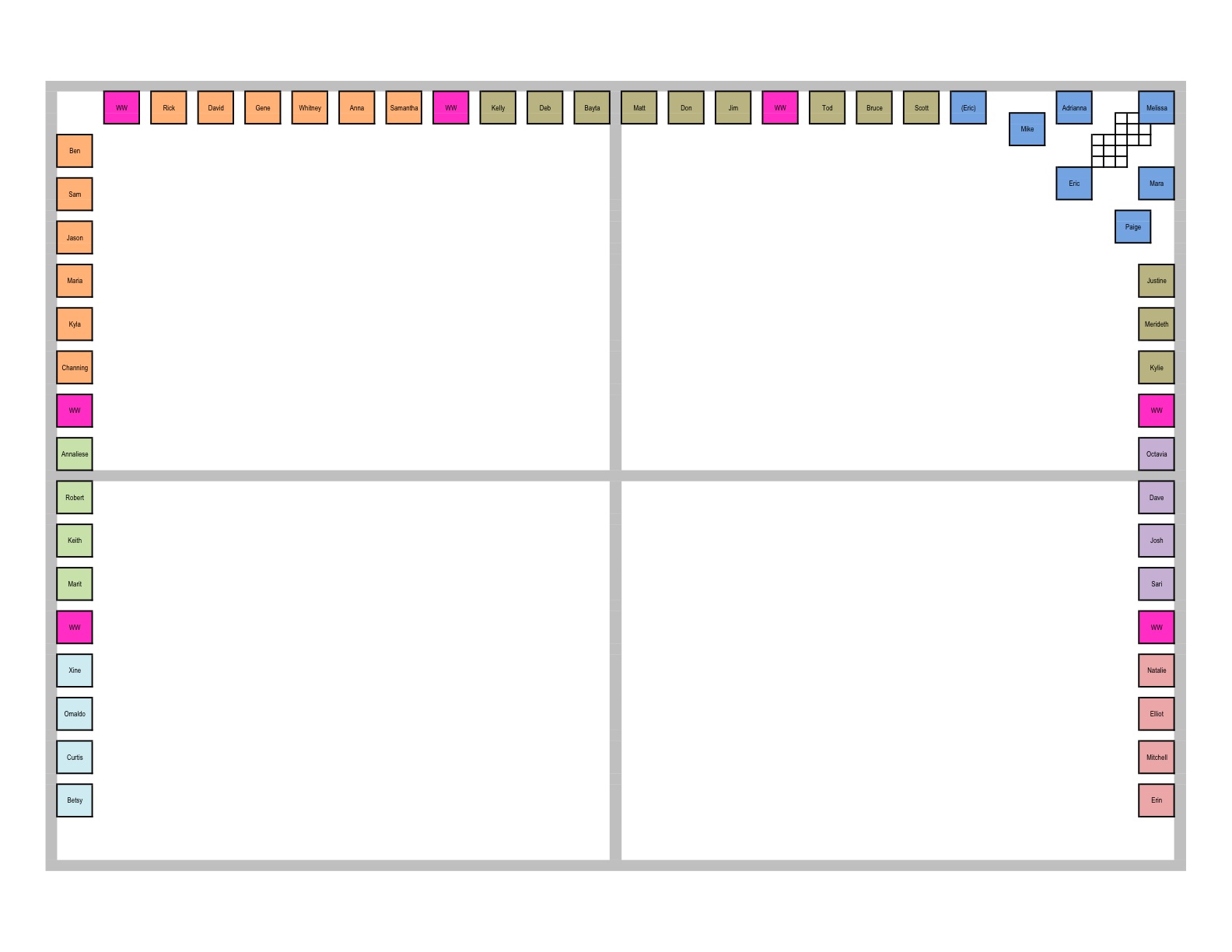 But that’s all just logistics. What of the music? I’d listened to an instrumental recording of the whole piece a couple of times and heard repeated snippets at dance rehearsals. Tuesday was my first hearing of the voices. A revelation, frankly. Now, in my mind, the inventiveness and opulence of the score matches up with/ complements/plays off against the creativity of the choreography.
This will be an incredibly rich and layered work.

Another question I’ve had—distinct from, though related to, crowd management issues—has been how the viewer will parse all the many impressions emanating, visually and orally, from the stage. A real danger in a piece like this, especially when performed in the relatively modest space of Intiman Theatre, could be too much busyness, along with a lack of theatrical coherence. Might it all end in an inability on the part of the audience to take in or figure out what is happening?

Tuesday night, Eric mentions the decision not to use supratitles. A good idea, it seems, from the point of view of calming clutter, reducing the likelihood of a too-many-calls-on-the-eyes syndrome. But for this idea to work depends absolutely on the singers’ clarity of enunciation.

During Tuesday’s rehearsal, every Greek section is gone over. I don’t know the language; it is still all Greek to me. But then a couple of the English versions (which will not be danced to) are sung through. Astonishing, the clean, crisp, unfuzziness of the words—especially given that, because of where everyone is positioned, to many of the singers Eric is not visible. Mimicking the conditions that will hold on stage, he plays the keyboard as he will conduct the instrumentalists during the show, from the far upstage-left corner with his back to the choirs. He instructs the singers to look at the audience or across at each other, but not at him. “If you need to be watching me, it’s a mistake, a failure.”

Eric literally fine-tunes the parts (while two brown labradors, Kelly and Chloe lounge cozily on the floor at the singers’ feet). There is no room here for vocal uncertainty,
for fudged flats, or the slightest sloppiness of rhythms. The singers are expected to govern themselves, to metronomic regularity in the sung Greek for the dancers, and to the clarity of a single, undistorted voice in the English renderings. Again and again—
like Olivier asking the dancers, “Do you see what I mean?”—Eric queries his singers,
“Does that make sense?” Both composer/conductor and choreographer redo, re-explain, rework the problematic bits: until each segment is understood, felt in vocal chords or bones; until in the end the once esoteric and unfamiliar becomes simple and natural.

To the ancient Greeks, as Eric reminded me, “Terpsichore was the muse who governed both choral dance and song. These now separate arts were once in the same ensemble expression.” Four weeks remain to performance time. The combining of Approaching Ecstasy‘s two-pronged sung/danced effort will surely have its moments of pandemonium and near-chaos (both good Greek words), but after a week of intent witnessing the rehearsal process, I do not doubt that the resulting union will be the inspired child of both Dionysus and Apollo.