How cold it was! The rehearsal was scheduled for a sunny Sunday afternoon at the Dance Fremont studios, but the temperature outside was barely above freezing.
Inside, due to a furnace malfunction, it felt scarcely over 50°F.

The run-up to opening night has begun.* There’s far too much to write about during these few days to stick to the usual Tuesday and/or Friday, so from now until showtime I’ll just post as needed. This long week began at the end of last week, with the departure of Whim W’Him artistic director Olivier Wevers, Andrew Bartee dancer of Olivier’s solo More, and board president Katie Bombico to New York City for the yearly APAP (Association of Performing Arts Presenters) conference, the premier showcase for dance companies seeking to make contacts, gain recognition, and interest presenters for the coming year. Meanwhile choreographer Annabelle Lopez Ochoa and Lucien Postlewaite—now dancing for Les Ballets de Monte Carlo, but founding member of Whim W’Him and a key dancer of the Crave More program—arrived Saturday night. 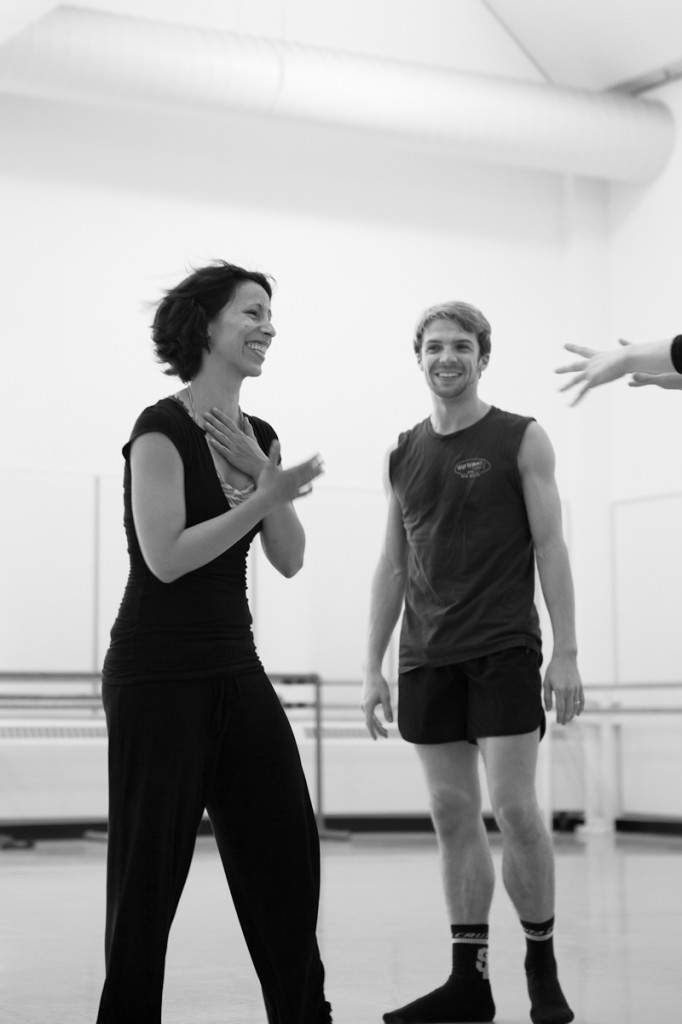 Sunday was the only time I’ve ever watched a rehearsal of dancers in down jackets, scarves, several layers of sweat pants and leggings, and (in the case of Annabelle, even when she and Lucien were running through her Before After pas de deux) down booties. The smaller of the two studios was a bit warmer. As the Crave duet of Lucien and Lara Seefeldt heated up, a jacket or scarf would fly off across the room in mid-turn.
The sequence is, as Annabelle says, “not romantic.” To me, it seemed full of disconnects, a coupling that was often more like wrestling, not a deep or secure relationship. 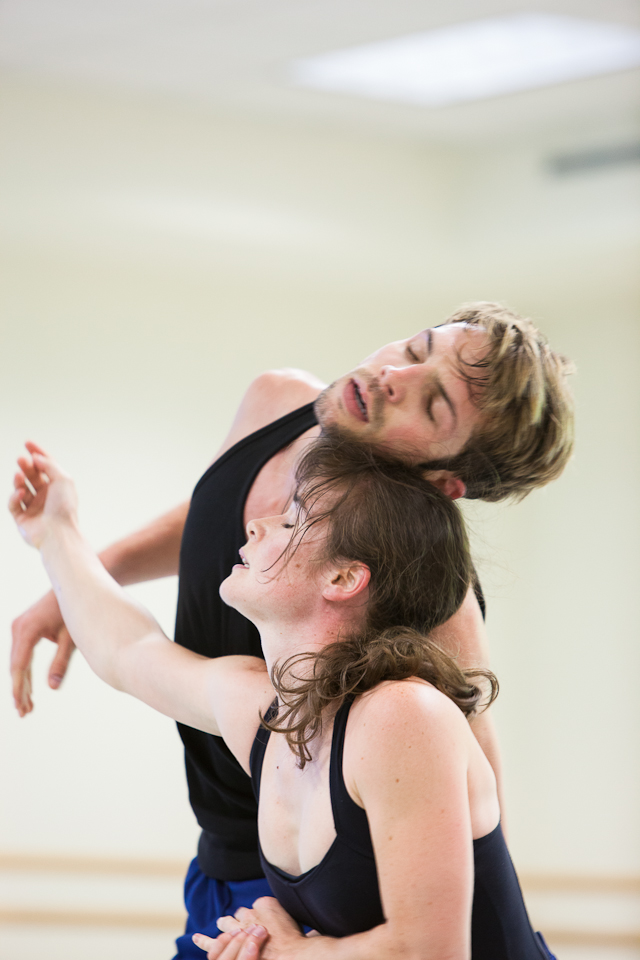 The adjective that best described it is “dangerous.” The pace was fast and unremitting, full of abrupt changes of direction, on a slippery floor in socks. In the narrow studio, the two dancers missed by centimeters the protruding base of a moveable barre, an incongruous basket of onions at the side, and the chairs where Annabelle and I sat.
This was the first run-though since June, but there was rarely anything tentative about it. Lara is petite and light. She was turned, slung about and lifted overhead by Lucien at dizzying speed. Lit by the ambience of a dance club in the theater, this duo should sizzle! 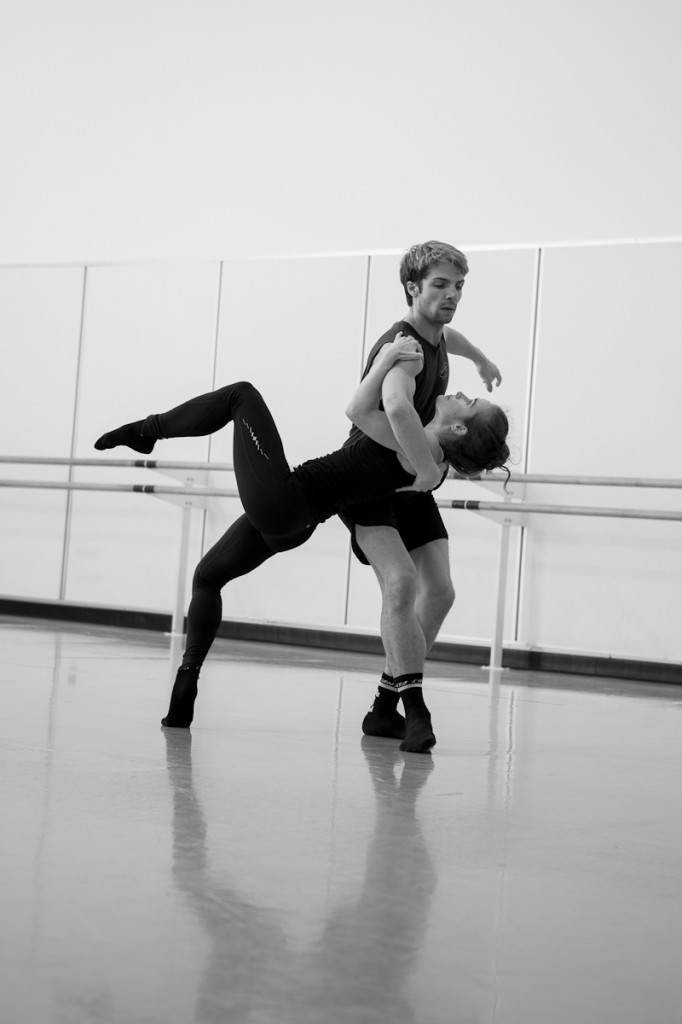 In a pause before Annabelle and Lucien went on to rehearse Before After, he rummaged in a duffel for a satsuma, some cans of Redbull for energy and a box of rather sinister-appearing glass ampoules. Looking like something you’d inject to get an illicit buzz or power surge, “It’s just magnesium,” Lucien says, “from a pharmacy in Monaco.” In liquid form, it’s taken with water to help bolster bones and ward off cramps from cold or overused muscles. We laughed as he poured one into the studio’s glass flower vase that he’d scrubbed out to use as a water bottle, having forgotten to bring his own along. 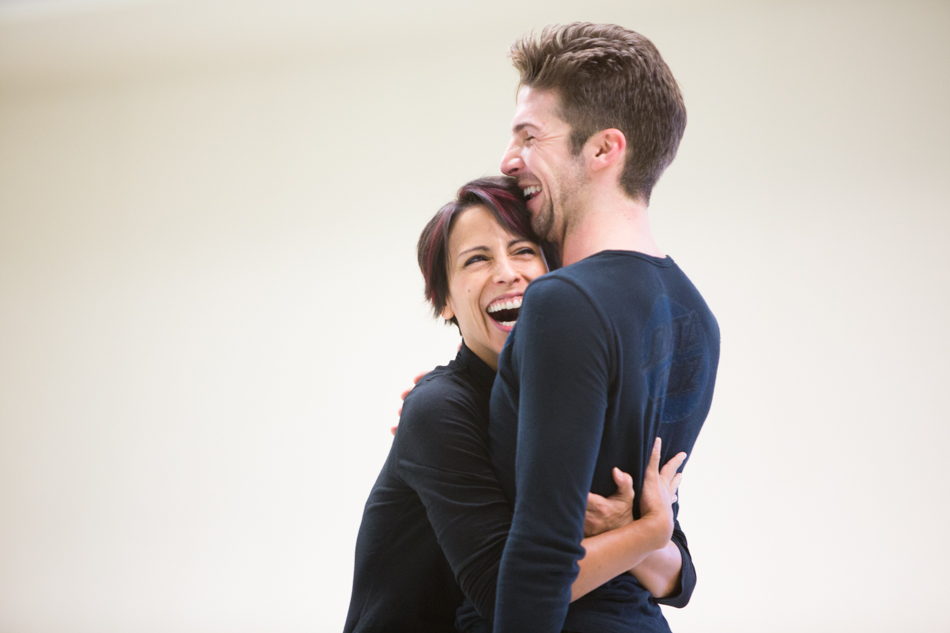 Before After covers too much space to be done in the small studio, and the temperature was even more frigid in the large one. The run-through was brief and more marking than full-out dancing. Even so, Annabelle pulled a muscle. It was time to go.

On Monday, while in the theater lighting director Michael Mazzola and the crew got things underway on the technical end, the dancers were rehearsing in the studio, for the first time with full casts of both Crave and The Sofa. Tomorrow’s post will introduce Grand Rapids Ballet guest dancers Yuka Oba and Nicholas Schultz, with photos from their first Seattle rehearsals of their long pas de deux.