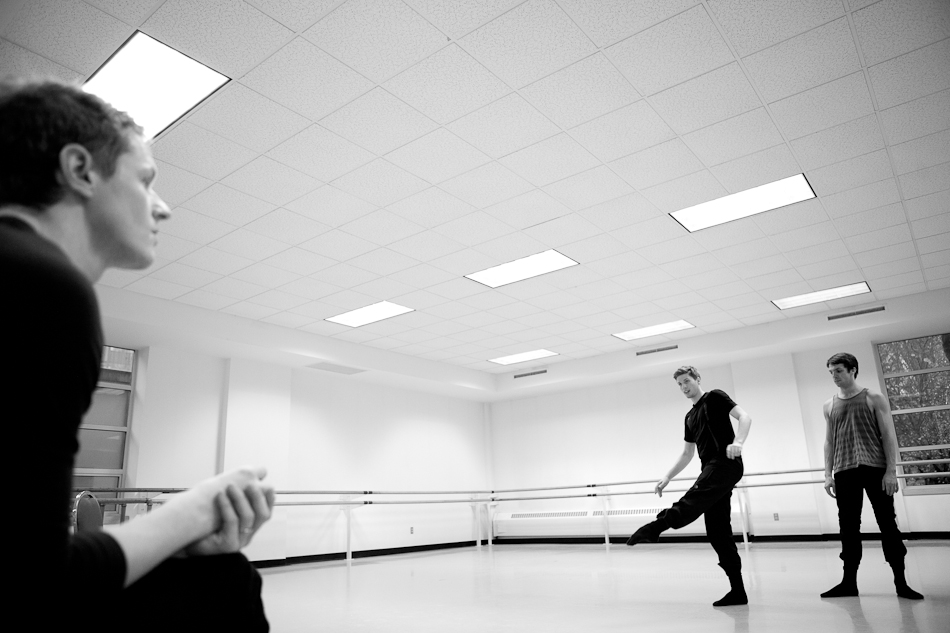 Exciting to be back in the studio yesterday, observing Olivier Wevers and the dancers create. Lots of progress in the past week. And soon we’ll have some new photos too!

When I arrived from the airport, a beautiful Kaori Nakamura and Lucien Postlewaite duet was in progress—for “Shadows,” the last poem of Approaching Ecstasy.*
“The final image,” as Olivier says.

Also rehearsing yesterday were Andrew Bartee, Chalnessa Eames, and Tory Peil.
As Tory had been available the most in recent days, Olivier choreographed several poems first on her. It was fascinating and inspiring to see Tory and Olivier together demonstrate the movements for “Faces” and, a bit later, to watch her dancing and describing—in a way that illuminated how she had internalized the material—the steps he’d taught her for “Obstacles.” Sometimes she recalled bits Olivier himself didn’t quite.

Both pieces will be performed by several more dancers too. As the others were shown what to do, I was once again floored by their kinesthetic memory. These were intricate, non-traditional movements in long sequences, often learned in the absence of music. Yet in the space of two or three repetitions, they had it. Later rehearsals will remind, refine, reconfigure, but the dancers’ basic ability to “get it” quickly with their bodies,
each in her or his way, never fails to amaze and delight me.

The rehearsal ended with a new group piece. Olivier read the poem aloud:

His sympathetic face only slightly pale;
His chestnut eyes a bit drowsy;
His twenty-five years seemed more like twenty;
And his clothes suggested an artistic flair —
In the color of his tie, in the shape of his collar —
Aimlessly, he sauntered down the street,
Still hypnotized, it seemed, by the illicit pleasure,
The forbidden delight that he had only just enjoyed.

On his own sheets listing the poems, Olivier has notated a phrase describing the mood or idea that he wants to evoke in each danced segment. The poem “Down the Street” endows the young man’s demeanor in this tiny moment with a languorous, dreamy cast.
Talking to the dancers, however, Olivier emphasized the briskness of the music, the need for the poem’s subject to straighten his tie, to glance around him, to make sure no one guesses at his clandestine life—in short, to give an impression quite different from the emotions induced in him by his last hour’s past time. In the dance, this tension, between the poem’s word and the societal context in which the incident occurs, is called to mind by a sort of moving canon. A sequence of walking steps, mostly on diagonals and interspersed by other movements, is started serially by the dancers, then repeated singly or by twos in a succession of restless, almost jittery criss-crossing patterns.

This latter short rehearsal (a mere 20 minutes) was the first stab at this particular poem. Watching Olivier show what he had in mind, I was not always sure how much he knew consciously about how he would move before it happened. What is clear is that whenever the dancers capture what at some deep level he wants, he recognizes it.
And he has the analytical/ verbal skills and dancer’s experience to convey his intentions and the means by which they can be brought to bodily life.

Next up: In the rehearsal hall with Eric Banks and The Esoterics