When last we met the three choreographers of Whim W’Him’s #unprotected program on this page, they were at various stages of creation. Andrew Bartee had a name for his piece, a strong theme and some ideas about structure, but had not yet begun to develop the actual choreography with the dancers. Annabelle Lopez Ochoa was well on the way to completing her work in the studio, though there were still uncertainties about music and no title. Whim W’Him artistic director Olivier Wevers mostly had images in his head and a piece of music. 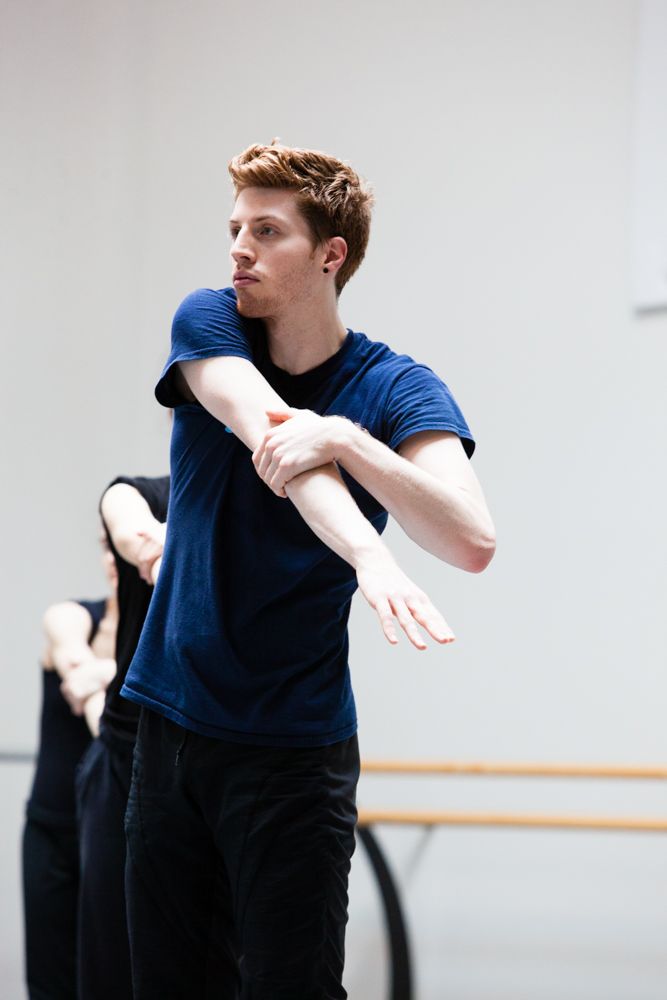 Last Friday Andrew began work in earnest on I’m here, but it’s not the same and this week he’s had, as he says, “an amazing three days.” He was inspired by “something of a breakthrough, in terms of structure, this morning

[Wednesday] while working in the studio alone. I’ve made all the material I will need for the ‘dancy’ parts, it’s the transitions that have been a real bitch to figure out, I think because I am using three separate tracks of music. Anyway, I have a new idea for the structure that I am excited to work out. 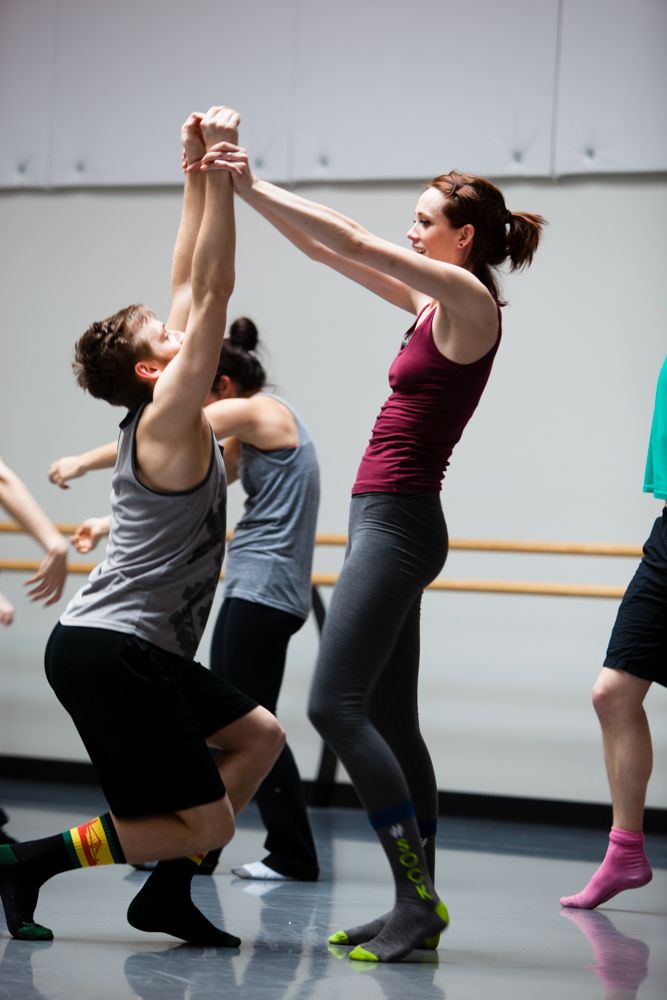 “I watched this movie last night that I really liked called Don Jon. The passing of time was demonstrated by repeating shots in which the main character was seen doing routine tasks such as walking down the hallway, making his bed, walking up the steps of the church. The repetition struck me as especially clever. Each time the shot was filmed from exactly the same place and angle, only the main character was wearing a different outfit. I love repetition in dance because I feel that it allows me to latch on to the experience. Also, when something becomes recognizably monotonous it’s far more satisfying when that monotony is broken. I think it also gives you a great foundation for your more conceptual themes, and character building. I know that’s kind of like ‘well duh’ but it seemed a nice moment of clarity for me. I want to make dance like Don Jon.”

Annabelle’s piece is now named: Les Biches, which literally means “does” (as in female deer), but also has various connotations from dance history, French cinema, and contemporary life. It is a suitably complex and witty title for a piece that plays with ideas about relationships between female creatures. Since the basic progression of movement was developed when Annabelle was last in Seattle a month or so ago, her desire now is to refine the movement and nudge its execution from marking steps to artistry. 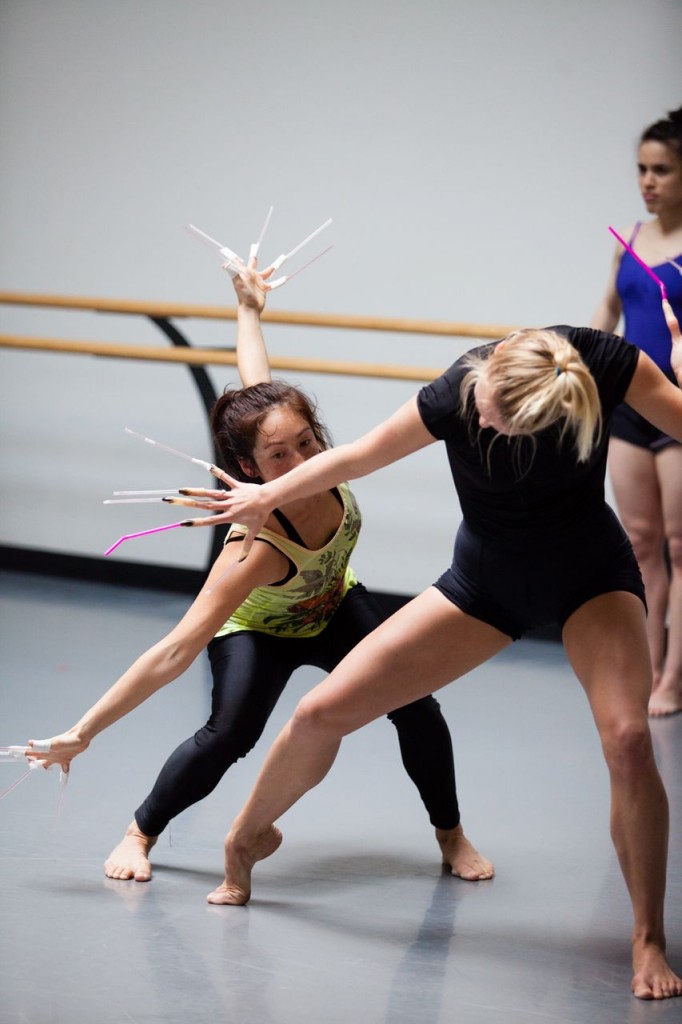 When I left for Australia a month ago, I had seen only the first couple of rehearsal hours for Olivier’s new piece, now entitled Above the Cloud. As I stepped back into the studio this Tuesday morning, the dancers were about to begin a run-through of the whole piece. What a transformation. The single, 40″ square pillow had grown to 5′ x 5′, and all seven of them had been built, by Linny Andrew, one for each dancer. There were even costumes to try out. But the revelation was in the dance itself. The concerto varies in tempo from très calme to molto agitato, and Olivier has found ways to translate the powerful Poulenc Organ Concerto in g minor into rich, urgent movement. Above the Cloud embodies the music, challenging the dancers to extend themselves, as it broadens his own choreographic range. 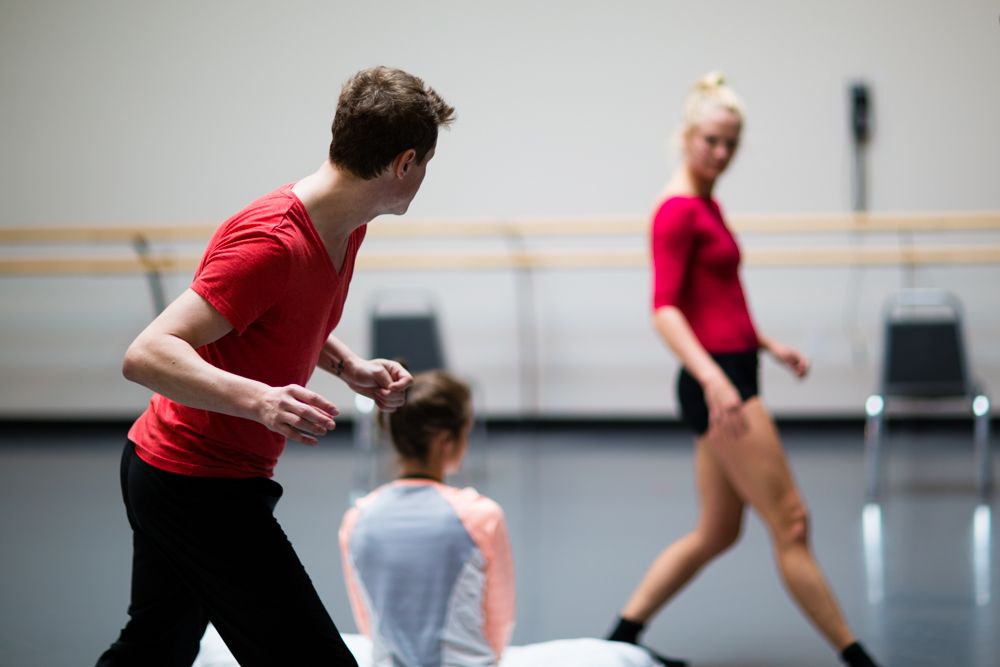 Says Olivier, “It has been great to use each of the dancers’ assets for Cloud. I love these artists and they have inspired me throughout the process. They are growing so fast into each of their parts. It’s also nice to have time to work on things and to develop the work stylistically and emotionally.“

For tickets to the 8 performances running May 15-May 23, go to #unprotected
Photo credit: Bamberg Fine Art Photography