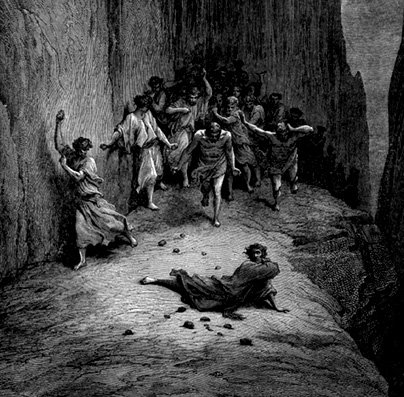 The stoning of St. Stephen, from Dante’s Inferno by Gustav Doré

‘Lapidation,’ or stoning to death, is one of those words like ‘defenestration’ (throwing someone out a window) that cloaks a nasty action in a long Latin-based word.
However you name it, stoning is not a widespread practice any more, but neither has it totally disappeared. In Whim W’him‘s new piece ThrOwn (to premiere January 20-22, 2012 at Seattle’s Intiman Theatre), Olivier Wevers uses death by stoning as a metaphor for the human urge to judgment and vengeance.

It makes sense in arguing against something—whether a philosophical argument or a practice like stoning—to first probe what is behind it; What needs does it answer?
What problems does it solve? Why is it invoked in the first place?
So in this case we may ask: Assuming that revenge or retribution is accepted by a society and the death penalty is not shunned, what it is that has drawn people to exact death by stoning as a form of punishment?

Stoning is ancient, going back at least to Biblical times. References to it are made in early books of the Bible (Exodus, Leviticus, Numbers, Deuteronomy, Kings) and by some schools of Muslim law, though not in the Qur’an itself. Death by stoning was originally designated as a dire punishment for various acts (from religious offenses like violating the Sabbath, blasphemy and worship of other gods; to disobeying parents; having a familiar, like a witch or wizard; or cursing the king), but stoning has come to be especially identified as a penalty for sexual transgressions.

Iran, Saudi Arabia, Somalia today’s new, Sudan, Pakistan and Nigeria still have stoning laws. They are rarely put to use, according to a useful article by Robert Worth (New York Times, August 21, 2010)—though a recent Somali example is in fact highlighted on the front page of today’s Times. Isolated instances still crop up too in other countries, as they have in the past few years in Afghanistan and Iraqi Kurdistan, where stoning is against civil law. Worth quotes Kristen Stilt, an associate professor at Northwestern University who has written about Islamic law. In olden times, adultery “was considered to offend some of the fundamental purposes of Islamic law: to protect lineage, family, honor and property, It was a tribal society, and knowing who children belonged to was very important.'”

The Times article further notes: “That may help explain the link between sexual crimes and stoning, as opposed to another form of execution. A crime that seemed to violate the community’s identity called for a communal response. Certainly the special horror of stoning is rooted in the prospect of being pelted to death by one’s own friends, neighbors and relatives.” This would be true, one imagines, in any very traditional society where terrible punishment is sanctioned—and where the status and power of women has been kept low.

I started this post by saying that the practice of stoning is not invoked too often any more. Why is that? Are humans becoming more humane, evolving away from the uncivilized habits of the past? Or have we merely moved on to less barbaric but equally horrendous modes of killing, more in tune with our technologically obsessed modern consciousness?—’questioning 3′ will take a look at these issues…