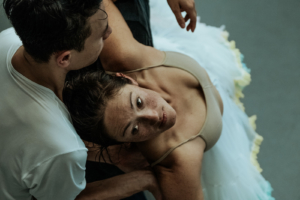 Stabat Mater dolorosa iuxta crucem lacrimosa dum pendebat Filius are the opening words, dating back at least to the 13th century, of an ancient hymn to the sorrowing mother of Jesus standing at the foot of the cross. The text has been put to music innumerable times over the centuries. On February 23 and 24, 2019, Whim W’Him joins with Early Music Seattle and Seattle Baroque under the direction of Alexander Weimann, to perform Giovanni Battista Pergolesi’s much-loved 1736 setting.* Whim W’Him choreographer and artistic director Olivier Wevers, in his interpretation of this strange and moving piece of music, at one level explores and pays tribute to this specific and poignant portrait of Mary’s suffering as she witnesses the Crucifixion. At the same time, Olivier works to loosen its tethers from a particular Christian narrative so that, as he says, its “themes can become approachable to other faiths and our diverse contemporary spiritual identities.” He adds, “I certainly want to pay deep respect to the origins of the music and the story it is based on, but I also want to challenge it and find a way to bring its spirituality out without being literal. It is a fantastic and inspiring challenge.”

Universal situations such as the relation between mother and son or timeless emotions like loss or maternal love can be illuminated, in dance as in music, through literal enactment of a particular story or via more conceptual or symbolic renderings. Olivier’s intention in this collaboration with Seattle Baroque is to approach the Stabat Mater from both directions. He notes that, as “the composition is split in two sections, the first descriptive of the action and the second more of a prayer and pleading,” the dancers at times take on specific roles in the Christian story—Mia Monteabaro as Mary/the mother

and Liane Aung as the Holy Ghost/the spirit),

but they each and together may equally represent a feeling or a character to which we can all respond.

“During Pergolesi’s time” notes Olivier, “dying was seen as a voyage into the afterlife, and thus could be interpreted as a final and awaited passage to heaven, or enlightenment.” Perhaps accounting for some of the Stabat Mater’s long-enduring power, Pergolesi himself died at 26 of tuberculosis shortly after completing this work, in which death becomes a transformative cleansing rather than an earthly separation.

As Olivier has choreographed it, the piece is never a strict narration, but “abstracted to connect to the music.” Olivier says he is “pretty flexible in working with any music,” responding to support it directly or counter intuitively. “There are very different intonations in the Stabat Mater music, each section with its own little power or twists. What is intriguing is how to make it continuous and not just stop” at the end of each verse. “Sometimes one part flows directly into another at other times it’s overtaken by the next.” He left one last aria at the end, only starting to create it late last Wednesday. “I love the idea of a canon, but a kaleidoscope canon, always changing, sometimes reversing.”

Olivier is exhilarated at the prospect of live music in these performances. “I’ve told the dancers, you really need to know your music, you can’t just rely on expected cues. It’s different every time. The tools they use, the muscle memory can’t work the same.”