How dances for two are approached by choreographer and director Olivier Wevers says a great deal about what attracts me to Whim W’Him. Since at least the Sixties, the cry for “relevance” has gone up whenever a new generation wants to reimagine old institutions, ideas, or ways of doing art. The word is overused, but the impetus is perennial and necessary. In ballet, serial revolutions over the past century or so—even in mainstream ballet companies—have chopped off the tsarist excrescences of old fashioned story ballets; introduced “abstract” works that concentrate on shapes made by moving bodies; brought everyday movement onstage; used new kinds of music, soundscapes, plain noise, the spoken word, or silence; and tweaked the relation between choreographer, dancers, and audience. Among other things.

But one aspect of classical ballet has remained remarkably hardy: the relation between the two dancers of a pas de deux. This last week, in a review of Jennifer Homans’s new book Apollo’s Angels, Alistair Macauley wrote (New York Times, Jan. 5, 2011): “My own alarm about ballet…is that its dependence on pointwork for women and partnering by men proposes a dichotomizing view of the sexes that is at best outmoded and at worst repellently sexist.” I couldn’t agree more.

In dance the duet owes more, historically, to ballet than to modern dance, which has tended to avoid such pairings precisely because they carry so much traditional male-female baggage. And yet, a dance for two is inherently compelling. In the right hands, it might be a powerful vehicle for revivifying concert dance (ballet and modern) in our time. The pas de deux distills relationship: life in society pared down to its core in one-to-one connections. It is, as Olivier Wevers says, “the most intimate form.” 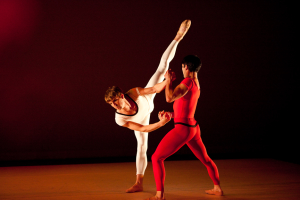 That is why I’m so intrigued by the way he has been mining the rich lode of dance-for-two possibilities, beyond the balletic prince-and-princess box.

It is amazing how much, despite all the behavioral loosening up of society— compared to Victorian times, say, or even the 1950s—danced relationships between two persons still tend to slot into preconceived categories. The vast majority of ballet duets continue to portray heterosexual romantic couples in love. Sometimes the two are beleaguered by forces outside themselves but their relationship is the all too predictable pairing of a strong, supporting male and a dainty, delicate female (despite the iron strength needed for 32 fouettés, etc!). And pointe shoes, for the most part, tend to accentuate those stereotypes. Least controversial and most predictable of forms, the conventional pas de deux is the easiest to invent, while its appeal to the mass ballet audience is deemed perennially reliable. No wonder its hammerlock on the genre is so strong. 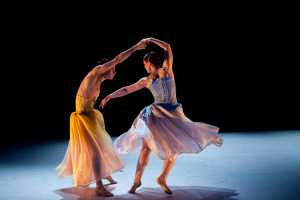 Yet dancing couples can be and say so very much more. A pas de deux is built out of physical contact. A relation is portrayed through the medium of touching and via the changing relationship between two bodies moving on a stage. Choreography employs the pair’s corporeal selves to make a statement about—sometimes among other things—the degree and kind of attraction (or repulsion) between them. Even if what links the two is ethereal adoration-from-afar, mutual physical awareness, or resistance to it, cannot help but be woven into every step.

I might almost be tempted to say that, because of the physicality of the art, some statement, however veiled and abstracted, is being made about the nature of the couple’s sensual responsiveness to each other. You don’t see many extended duets between, say, an aunt and a young nephew, a boss and an employee, or a monarch and a messenger. If you did, the expectation would likely be that something out of the ordinary was being implied and transmitted about a physical awareness between the two persons—perhaps not even realized consciously by either party at the beginning. The job of the choreographer, and the dancers, would be to bring to the surface whatever hidden emotions and desires lurk beneath. This is not to say that other relationships couldn’t be developed, only that the physicality of the medium will always tend to inform the message.

But enough abstractions already! Last Thursday, dance critic Alice Kaderlan, talked on KING radio about how Whim W’Him (along with Seattle Dance Project) demonstrates a recent trend toward pieces that are connected people’s everyday lives. In an important way, the kind of dance she describes, coupled with the pas de deux form and exemplified in Olivier’s new Monster, could provide the start of one way out of the dead end identified by Macaulay.

The trio of duets that make up Monster—being danced at New York’s City Center for the first time as I began writing this Saturday night—delves into how our lives can become monstrous. 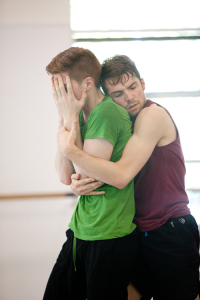 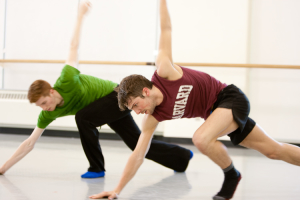 The core of Monster/Society is a very sweet and tender love duet, akin in spirit to the most engaging of old fashioned pas de deux. Even the pervading sense of societal disapproval plus a need to hide is not that new (think Romeo and Juliet). What is novel, however, is the equality within the couple. Neither dominates. They jointly partner one another and are mutually frustrated by their own, or the other’s, weakness in the face of outside obstruction to their love. Just as unusual, Society is for and about two men, thus informing and changing its dynamics for dancers and viewers alike.

The honesty and openness of this liaison—carefully choreographed by Olivier into the movement and its execution—are highly refreshing and set the tone throughout Monster. You might say they establish the relationship gold- standard for the whole piece. This is a pair who, one imagines, will make it, even in the face of societal hostility.

Is there a bit of romanticism or wishful thinking going on here?—that the only viable connection in the three parts of Monster is the one between two gay men? Maybe. Or perhaps it’s simple irony. Nothing is ever perfect in this world, and at least some of the time what doesn’t kill us really does make us stronger…

Monster/Addiction, by contrast, is danced by a man and a woman. From the start, there seems to be some sort of bond between the two, highlighted by their moving for the most part in unison. As in Society, the traditional stalwart-male/ dependent-female stereotype is thrown off. But so are human ties, caring, and morality. The relation here is under siege throughout; there will be no happy ending for this pair. The tragedy of addiction is made far more painful when it is experienced by the audience not just by one person, but through the destruction of an interpersonal connection. 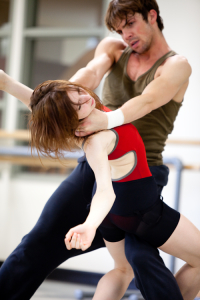 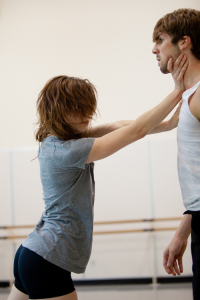 “Tempestuous relationship,” in Olivier’s words, is the subject of Monster/Relationship.

This duet too is female-male and isn’t traditional in any straightforward way. Despite the use of pointe shoes (the only segment of next week’s Olivi er premieres to do so), both parties’ display fiery tempers, strong attraction and equally fierce rejections. The woman gives as good as she gets and, although she is physically much smaller in stature than her partner, her flying leaps at him or her thrusting him across the room with a hand on his chest, for example, as well as his near-strangulation of her, make this into a statement about the psychology, character, and toxic interactions of two particular individuals, rather than any rehash of standard moves and motivations.

In all three Monster pieces, the particular details of a pas de deux distill the emotional essence of a situation, turning the duet into a supremely efficient and poignant medium for conveying universal human states.