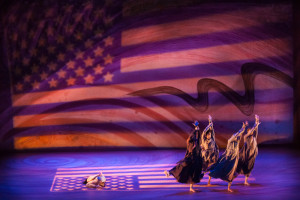 This is a Whim W’Him first! An entire set (backdrop, floor, and four “legs” on each side) created expressly for ThrOwn, which is the centerpiece, choreographed by Artistic Director Olivier Wevers, of the next company production, January 20-21, 2012 at Intiman Theater. The mysterious and beautiful set has been designed by iconic Seattle painter/sculptor Steve Jensen and is currently in the process of being painted by Steve, with the excellent technical assistance of master scenic artist, Ruth Gilmore.

The whole process is fascinating from start to finish. In another post, I’ll talk about the design itself, what Olivier has in mind and how Steve is achieving it, but this time around I want to focus on how the translation from idea to object is actually done. At first, when he thought he needed to work directly onto the fabric, Steve found the idea of painting on such a scale intimidating—the drop measures 58ft. wide by 30ft. high, and the ground cloth will be 49ft. x 34ft. But in fact, at Ruth’s suggestion, he began by painting small (on the order of 11 x 17 inches) originals of the designs he wanted, and the enlargement could be done later.

The first piece to be tackled has been the backdrop. On Tuesday of this week a giant, seamless piece of 100% cotton muslin arrived folded—from the company that manufactured it—at the scene shop of the Seattle Children’s Theater, where the painting is being done. Before anything else, it needed to be stretched and stapled down to exactly the right dimensions, then sized (by using liquid laundry starch) and smoothed out flat with brooms.

Next up is to cover it with a more or less uniform, but speckled/spackled, undercoat. The drop is made of a quite thin, translucent fabric, so most of it has to be painted lightly enough for light to be able to shine through. (The drop is not the same as a scrim, however, which is a mesh material, where you see right through the holes between the threads—and which reminds me of the matting you get from Ikea to put under rugs to keep them from slipping. Rather, the drop is made of a regularly woven cloth.)

The following stage is the stretching of a string grid over the whole in large four or eight foot squares and rectangles. At this point it begins to resemble a very large, and considerably more sophisticated version of a paint-by-numbers picture. Steve and Ruth, in their stocking feet and using long sticks with charcoal attached to their ends, sketch out the big shapes. If something isn’t right, they can whisk it out with “floggers” (their actual name) that consist of a rather ornate broom handle perhaps two feet long with strips of canvas affixed to one end.

When the forms are outlined to Steve’s satisfaction, the real painting begins. There are five colors in the palette being used, and a surface is built up with a series of very watered down washes and spatters that will allow different colors to be picked up by lighting designer Michael Mazzola. Even the darkest sections, which will not allow much light through, are composed of an artful mix of shades. One interesting aspect is that Ruth orchestrates the painting to keep the different areas more or less on the same color values. If the various sections are brought up bit by bit together, it’s possible to judge the entire effect as the project moves along. It is quite a magical process. When you stand down on the floor next to the drop, it can be seen to be made up of many colors and strokes and spots. But when you go up onto the gallery or loft above the floor, colors coalesce, and it is transformed into a whole. Each of the three times I’ve been there so far, it has gained in depth, complexity. When it was a vast empty space to be filled it seemed very large. Now that it is taking on its proper form, it seems in a way even bigger, because now it is a space filled with intention.