out on a whim – Robert Hardgrave 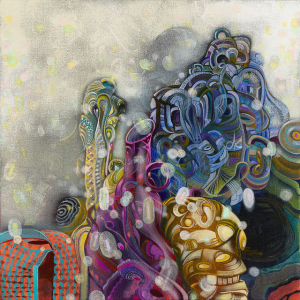 Robert Hardgrave started out in graphics, drawing comics and for ‘zines, designing T-shirts, computer cases, skateboards and shoes. He is now, in his own words, “an abstract/figurative artist.” It sounds like a bit of a contradiction, but when you look at what he produces, the term makes sense. “I didn’t plan to be doing this,” he says, referring to fine arts, but that’s what happened, and his paintings have become “meditations on the unpredictability of life.” He continues: “Despite all the information we are given, I believe much is unknown to us in the moment, with clarity only achieved upon later reflection. My working process parallels this belief. There is never an overall plan or formula in my work, but allowing the imagery to manifest itself, it becomes an exercise in movement and a dedication to discovery. It is about the excitement in each evolving moment in life be it minute or grand and savoring it.” His art also shows his preoccupation with reincarnation and ideas on what happens after death. A series of dire health crises—during which he drew to keep going and drew on whatever came to him without reflection—redirected his life and work, sending him in the direction of painting what he wanted/needed rather than working on assignment for others. Not coincidentally, I imagine, his reputation took off after that.

Robert works in acrylic, ink and watercolor. For Jeff of the BOOOOOOOM.com website, Robert’s work is “Kinda like Picasso, Dali, and Kandinsky rolled into one!” It’s not a bad description, as an orientation toward what to expect, but doesn’t do justice to his individuality, honesty and inventiveness. Personally, I fell in love at first sight with his gorgeous colors.

Asked in an interview for theextrafinger.com a few years ago about the influence of his environment on his work, he said: “In the spring time I tend to draw a lot more trees and vegetation sorts of things and in the fall I use yellows, oranges and browns,” then added, “I am more influenced by human condition and circumstance though.” It’s autumn now, and Whim W’Him is excited that Robert Hardgrave has contributed an intense and enigmatic painting, in shades of a vibrant orange with white, to the très out on a whim auction and party on October 15.

For a very nice video of Robert talking about his work, see; https://www.youtube.com/watch?v=gDrkT36cMcA