out on a whim – Jesse Edwards

Jesse Edwards is as big a bundle of contradictions as you could find in a day’s travel, on foot, in a boat or by air. 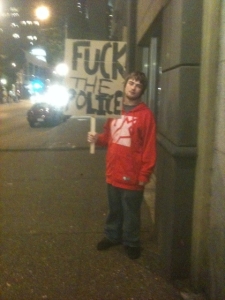 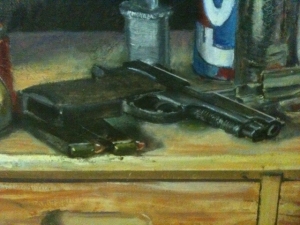 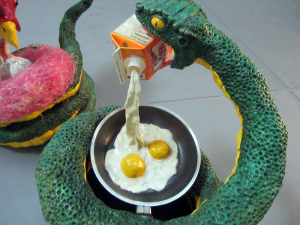 He carries a big enough chip on his shoulder to alienate people right and left, yet enough talent, skill, drive and ability to withstand suffering—both imposed from the outside and self-made—to survive and thrive as a genuine artist and a genuine original.
Half a dozen years ago, Greg Lundgren, freelance curator and co-owner of the Hideout, an art bar on Boren Avenue, told the Seattle P.I., “I was struck by the polarity of his work, half classical landscapes and half still lifes with crack pipes. These extremes are not often found together. What if he manages to bring them together? When he hits his prime, people are going to say, ‘Whoa. Where’d he come from?’ He comes from art. He’s a lifer. He’s not going to get a job in an office and stop painting.”
It’s still true.
As a case in point, consider the ceramic piece “Spray Paint“—at once beautifully wrought and slyly undermining of itself—that Jesse is contributing to the très out on a whim action and party this coming Saturday night, October 15 at Steve Jensen Studios.

For more on Jesse, and lots more of his work, see: https://jesseedwards.net/