This month Olivier Wevers is branching out to the midwest, bringing two Whim W’Him works, This Is Not a  Raincoat and FRAGMENTS, to Grand Rapids Ballet Company, whose artistic director is Pacific Northwest Ballet‘s beloved former principal dancer Patricia Barker. This spring, Patricia has started a new program—with no money or time, as Whim W’Him artistic director Olivier Wevers says—on sheer charisma, it seems. Olivier is the first artist-in-residence. Last month he went east to set Raincoat and FRAGMENTS on GRBC dancers. The two pieces were performed this last weekend as part of a program called MOVEMEDIA – DANCE/MEDIA/INNOVATION. 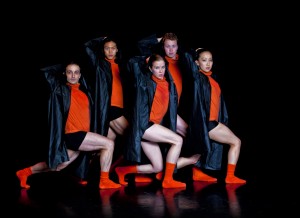 By email and phone, Olivier, reports that he finds it very exciting to see different dancers in these roles. The GRBC facilities are great too and the dancers skilled and receptive. He has been encouraged by buzz of this new initiative, that is bringing contemporary dance to a largely classical company. He’s also pleased at the response of the audience, who gave his work a rousing accolade. Their enthusiasm was seconded in a thoughtful review—by Jeffrey Kaczmarczyk (http://www.mlive.com/entertainment/grand-rapids/index.ssf/2012/03/grand_rapids_ballet_choreograp.html)— which called Olivier’s work “abstract, occasionally unfathomable,” and added, “but the Belgian-born choreographer’s work also is riveting.”

As the second part of his residency, Olivier is choreographing a work (as yet not quite named, but to be premiered April 6-7, 2012). This new piece is one that has been gestating for some time in his fertile brain, and I’ll write more on it in a later post.
For now, let’s just say it involves a sofa—an apt if serendipitous centerpiece for a ballet choreographed in America’s premier furniture-producing city…