Strange creatures and unusual accoutrements will invade the Whim W’Him stage with #unprotected, opening May 15 at the Erickson Theatre on Capitol Hill.* 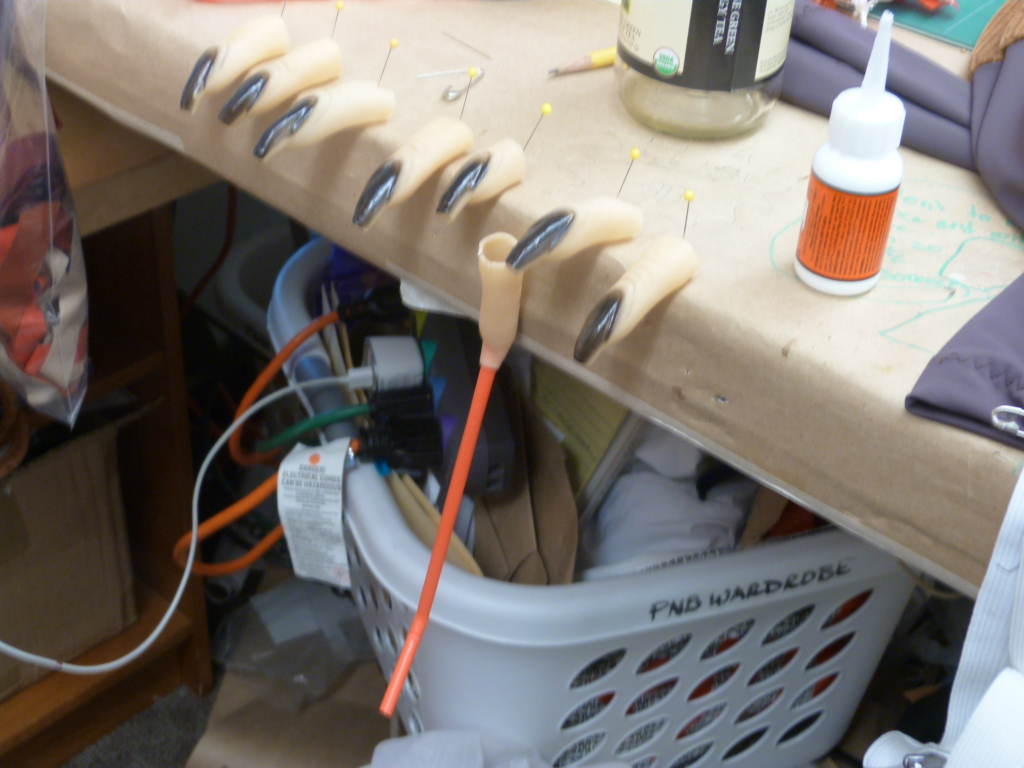 For Mark Zappone, costumer of Annabelle Lopez Ochoa’s new piece Les Biches,
there have been plenty of the small but tricky challenges on which he thrives.
The four female beings who inhabit the world Annabelle creates have very long fingers and even longer nails. How to represent them on a stage in the “real” world is a surprisingly complex business. First attempts involved duct tape and straws, but sweaty fingers sent the nails clattering across the floor in rehearsal. 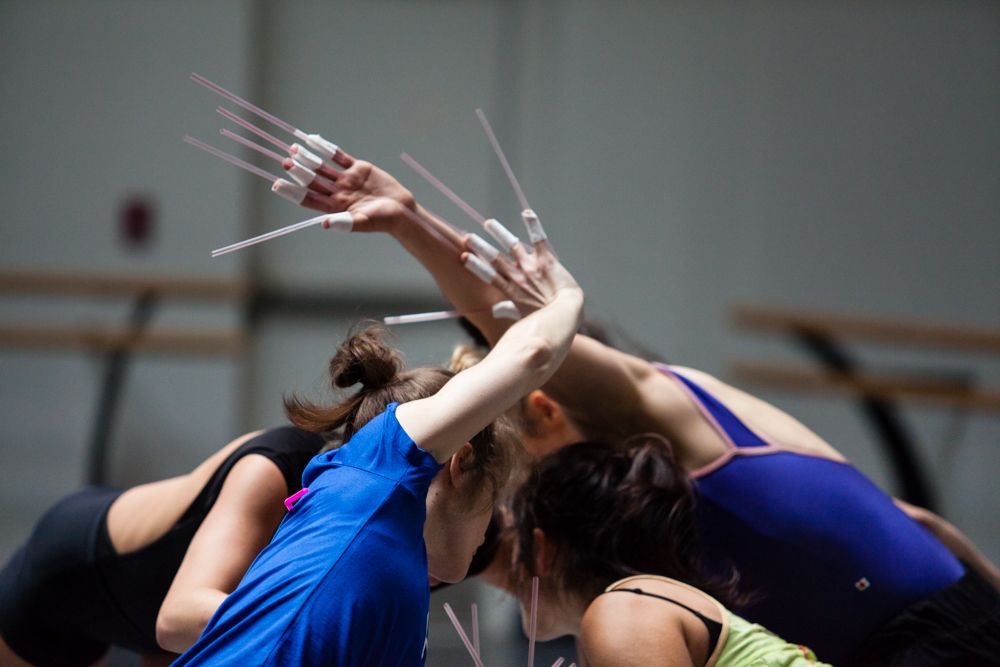 Adhesive tape worked better. Then Mark dug up a product with the delicious name of “Horror Fingertips.” Those are still in the running, with straws poking through to elongate the nails even further, but the fingertips are very narrow and also hard to keep on, so the best solution will probably be “toupée strips,” used to affix wigs (or the sashes, Mark says, of Miss USA and Miss Universe contestants). 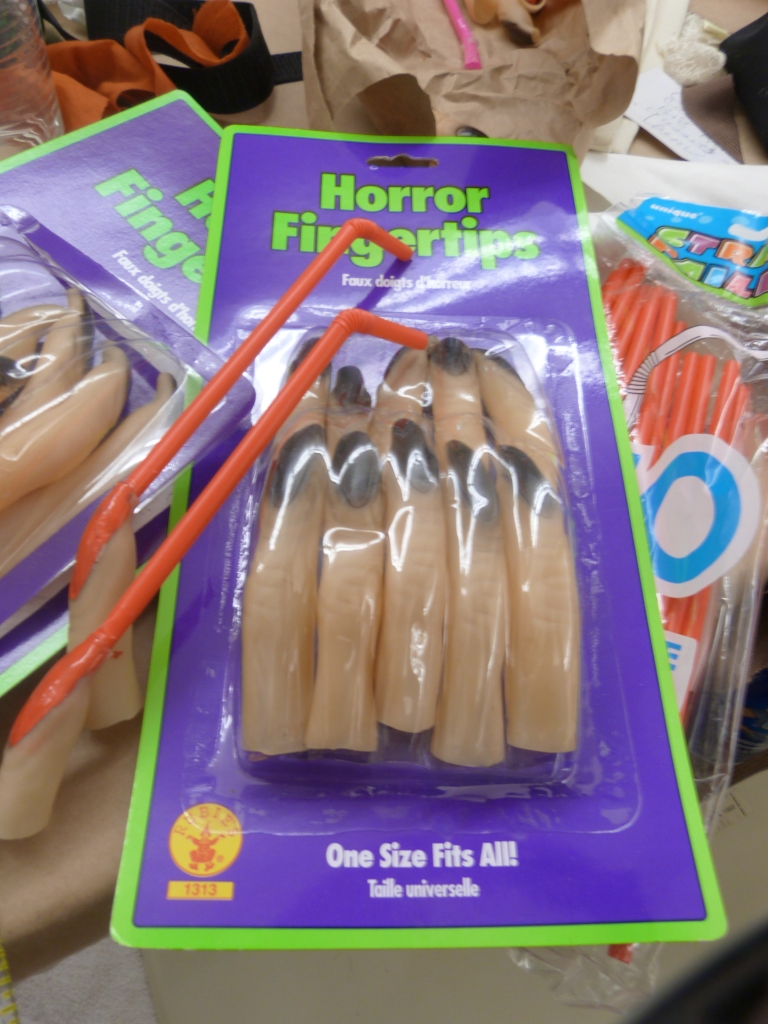 Furthermore, the nails only come in black, but they must be bright red like the straws, so some sort of paint or lacquer needs to be used. Mark has tried various substances, but there are problems of cracking, so it’s still a work in progress. 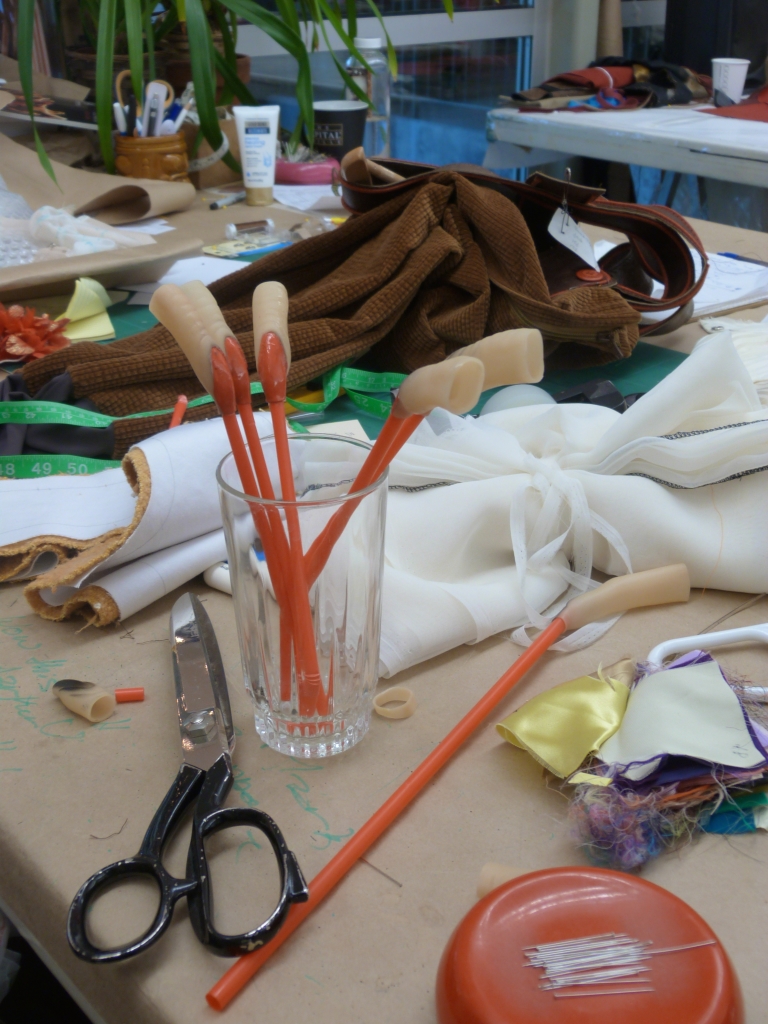 In the overflowing costume shop at Pacific Northwest Ballet, where Mark is heavily involved in creating costumes for PNB’s new Giselle production, I asked him for an example or two of other odd costuming problems he has tackled in his wide-ranging global career. After thinking for a moment, he replied, “How about the topless giraffe for Le Cabaret du Casino?” in Monte Carlo, Monaco. That dancer wore a giraffe-pattern painted body suit with strategic cutaways and boots. Another show involved spirals of fake movie film, made out of piano wire, bent to curl around dancers’ feet and legs. 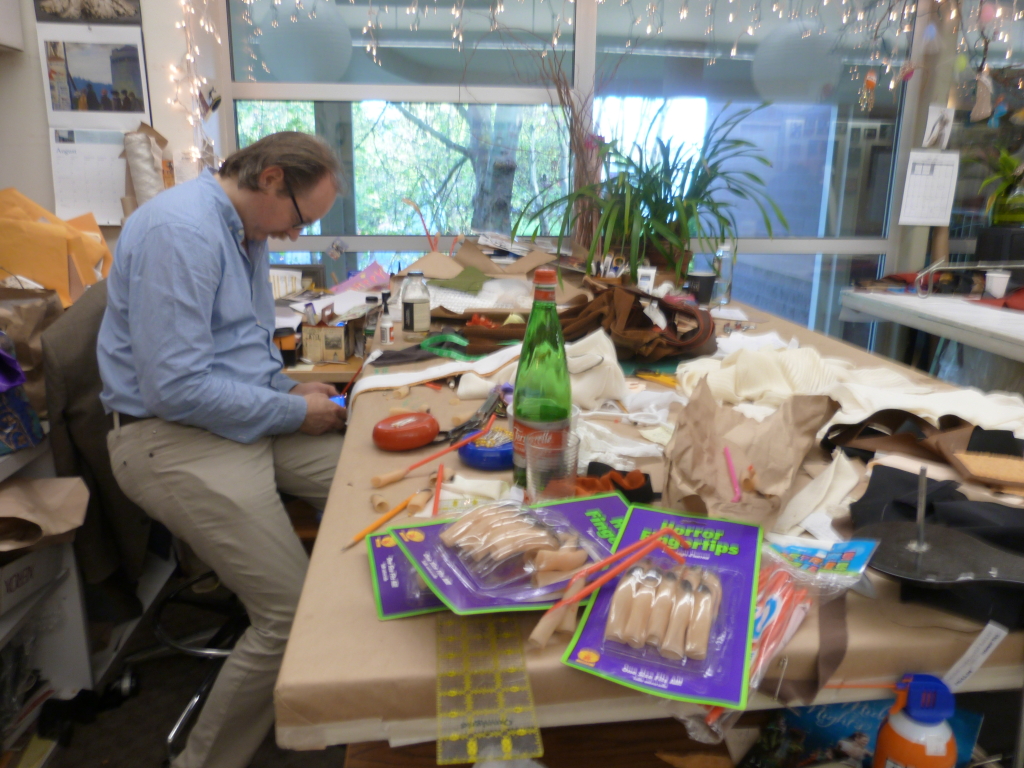 As to the costumes for Les Biches, they will involve bald caps with mesh straps that have to be affixed somehow (sewing and some glues tear the rubbery fabric). Knee-length tunics of a flesh-color-dyed gauzy material will be frayed at the edges, chopped at “to given them that rat-chewed quality,” and finally splotched with gold from a special fabric that releases its gilding when scrunched up in a special glue then ironed on. 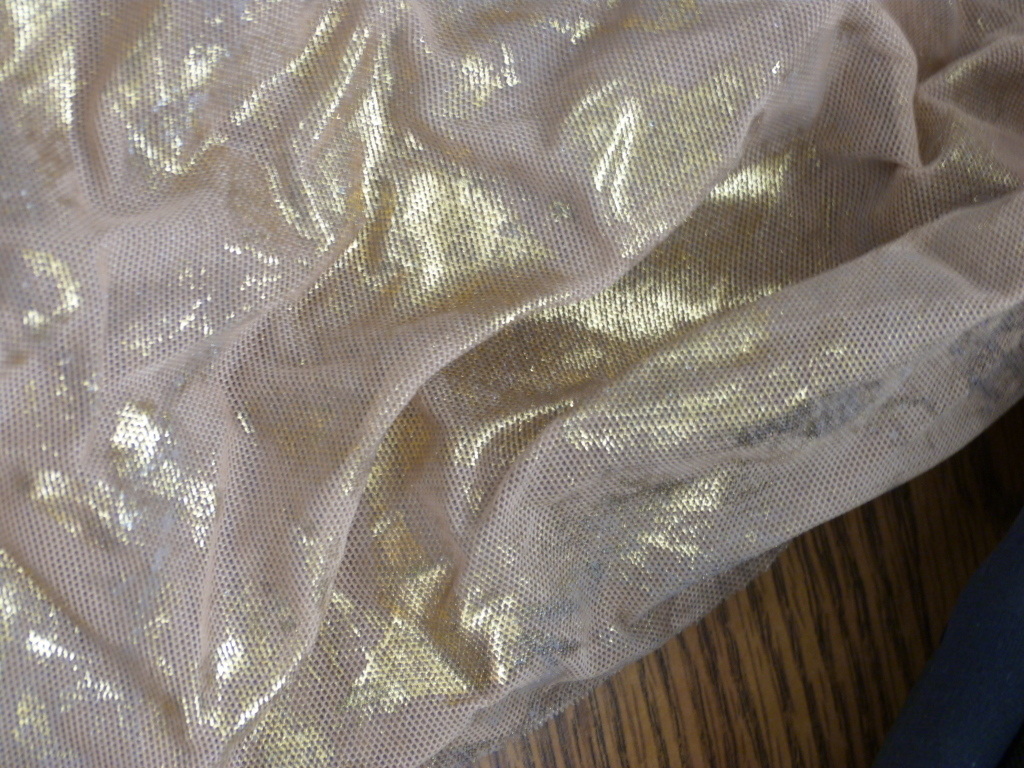 A quite a different set of challenges is presented by Whim W’Him artistic director Olivier Wevers’s piece Above the Cloud. In this new work, cloud-associated ideas are suggested, represented, and spoofed, by seven large pillows. Seven dancers toss the pillows in the air, drag them and nestle in them. The pillows serve as weapon, comfort, barrier or burden.  That’s a lot of freight for what we think of as a quintessentially fluffy object, especially when the actual physical object needs to be capable of much punishing manipulation and distortion, while still reverting to its basic shape.
Lucky for Whim W’Him, Linny Andrew is fully up to the task. 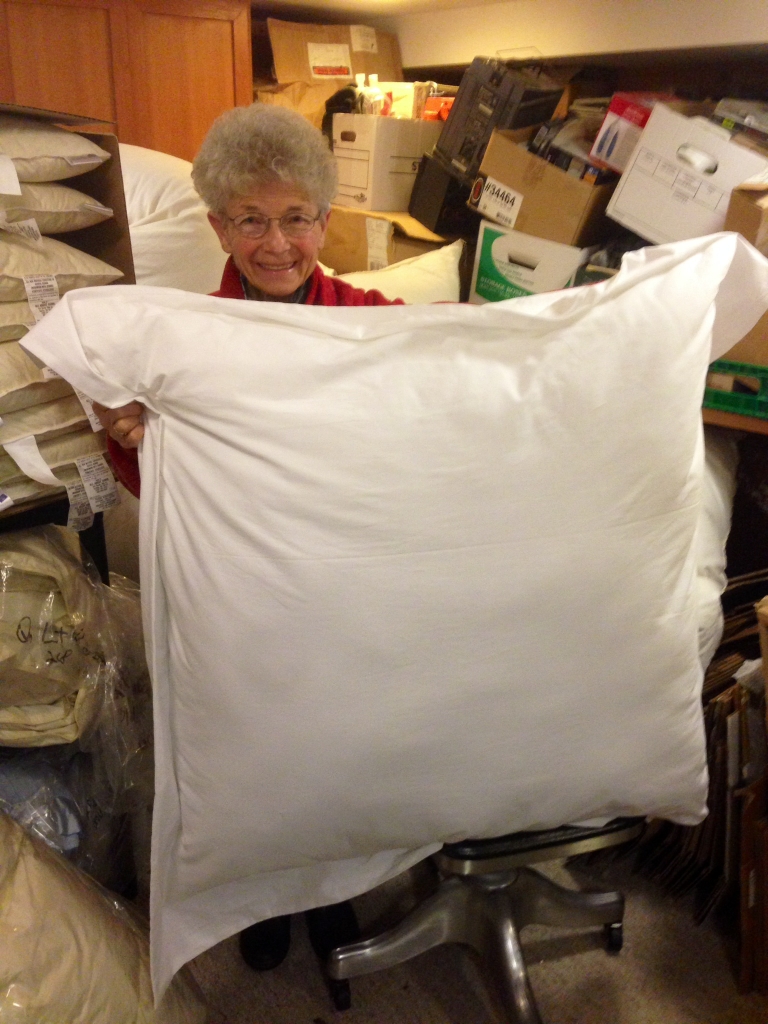 In addition to her job at the backstage entry to McCaw Hall, she has a thriving home business in a basement-garage near Greenlake, where she and her associates fabricate duvets, cushions, pillows, and anything else you can think of that requires stuffing.
For Above the Cloud, Linny first made a 40″ x 40″ version, which—it was decided after tryouts with the dancers—was not large enough. The final incarnation is five feet square. 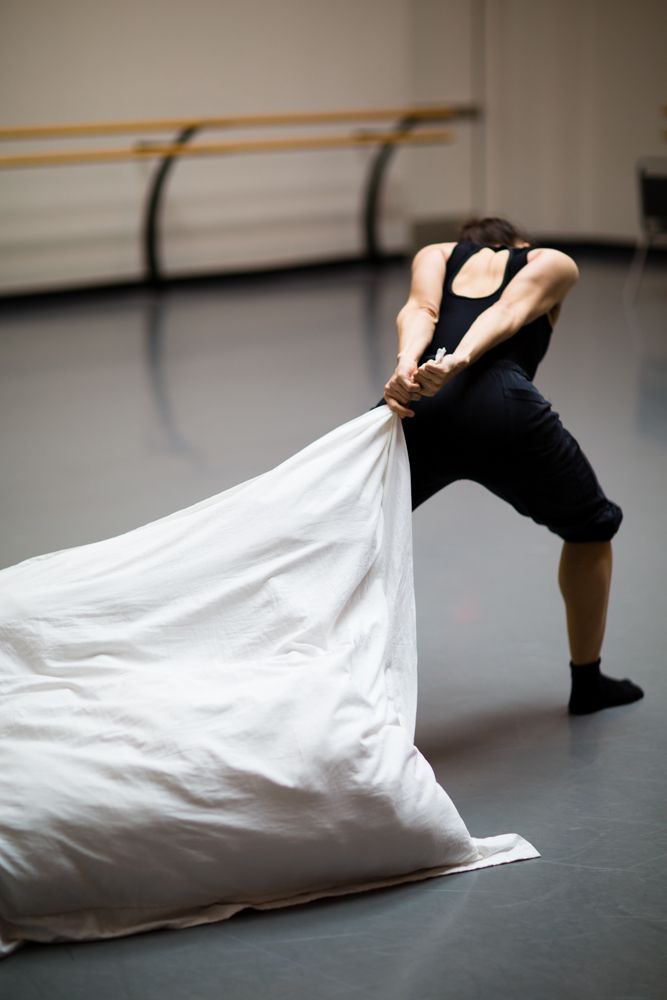 “Head in the clouds,” “the electronic cloud,” “a clouded outlook”— Above the Cloud explores a multiplicity of meaning. The piece could as well be entitled “Cloud Sourced”…

*For tickets to the 8 performances running May 15-May 23, go to #unprotected
Photo credit: Dancer images by Bamberg Fine Art Photography