Last week Grand Rapids Ballet—whose artistic director is former Pacific Northwest Ballet star ballerina Patricia Barker—had its début in Seattle with a double bill.
After dancing the Seattle premiere of Whim W’Him artistic director/choreographer Olivier Wevers‘s witty evening-long Midsummer Night’s Dream for 3 nights, GRB switched gears on the weekend to MOVEMEDIA, a lively mixed repertory program of contemporary pieces by 4 choreographers: Annabelle Lopez Ochoa, a favorite with Whim W’Him audiences, for whom she has made several pieces and will create a new one in the 2015-16 season; Penny Saunders, whose exploration for Whim W’Him of the works of American painter Edward Hopper garnered much praise; Mário Radačovský, with whose National Theatre Brno (Národní divadlo Brno) Olivier is now working in the Czech Republic; and David Parsons.

I spoke with Michael Auer, GRB creative director (and Patricia’s husband) about the genesis of MOVEMEDIA. When the couple first went to Grand Rapids, the major emphasis there was classical. Some contemporary works were being done, but separately, in a “workshop, black box way.” On the one hand, Michael says, if you really wanted to make contemporary dance meaningful at GRB, “you needed to put on more full-fledged productions and charge more than $5,” while on the other hand, you would also need to avoid “confusion on the customer’s part.” Contemporary dance was not necessarily what the company’s long-established audiences came to see. The solution:

As Michael puts it, GRB created “an identifiable product by slapping a name on it.
A funding opportunity arose, and Patricia took it.” Resources were mainly contributed by the Rosemary and David Good Family Foundation, for a couple of years at first, but now the two part program is going into its 5th season. Whim W’Him’s Olivier Wevers was the first recipient of the two-part opportunity: first, to set an already created piece on GRB; and then, to create a new work for the company.  The Sofa, choreographed for that initial MOVEMEDIA season, has now been performed not just by the Grand Rapids company, but by Whim W’Him in Seattle and at the Joyce Theater in New York City, and will open later this month in Brno, Czech Republic, where Olivier is currently rehearsing.

Over these 4 years, MOVEMEDIA has produced 36 ballets—by local, emerging and established choreographic talent, the full spectrum. By now, however, MOVEMEDIA is fully integrated into the repertory. And rather different choices are being made: more works by well-known choreographers, less total pieces, more time and resources to be devoted to each, more light designer time, etc. 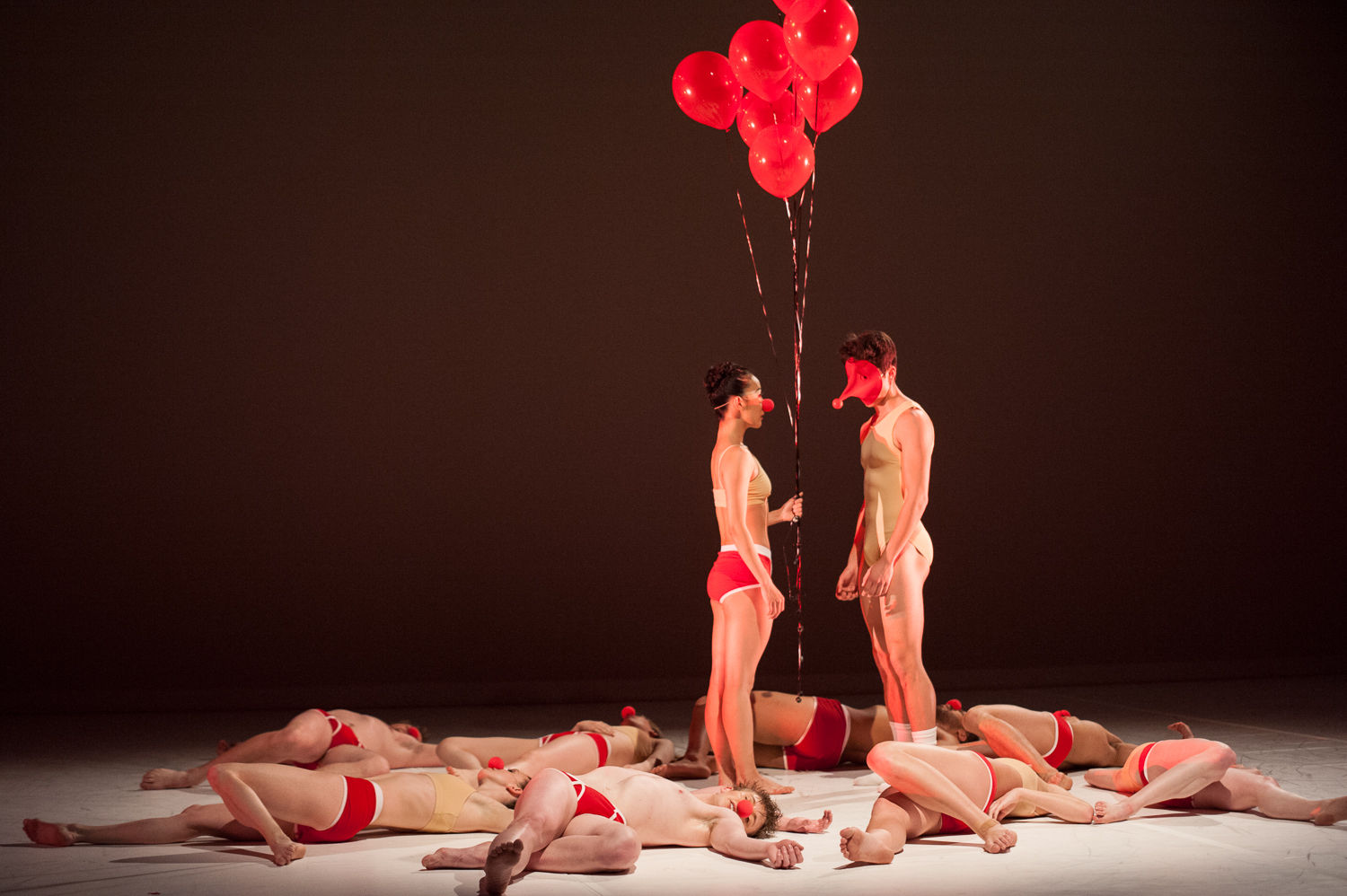 There is always limited money. The program can’t put the choreographers up in fancy hotels. And it’s interesting, says Michael, to give local choreographers a platform.
So especially in the the beginning, rather as with Whim W’Him’s Choreographic Shindig, MOVEMEDIA afforded, among other things, an opportunity for young people (such as dancer Yuka Oba) to experience and experiment in other aspects of dance than performing. “There was a less pressured environment for choreographers.” With some of the newer choreographers, Michael says he has taken an active role—so they can bounce things off of him, help shape their concept. “What do you want?” he would ask. “I’ve got strong ideas on how you might—I don’t say should!— proceed.” He might help the shaping of ideas in the choreographer’s own mind. They have had conversations on choice of music, development of vocabulary, lighting. 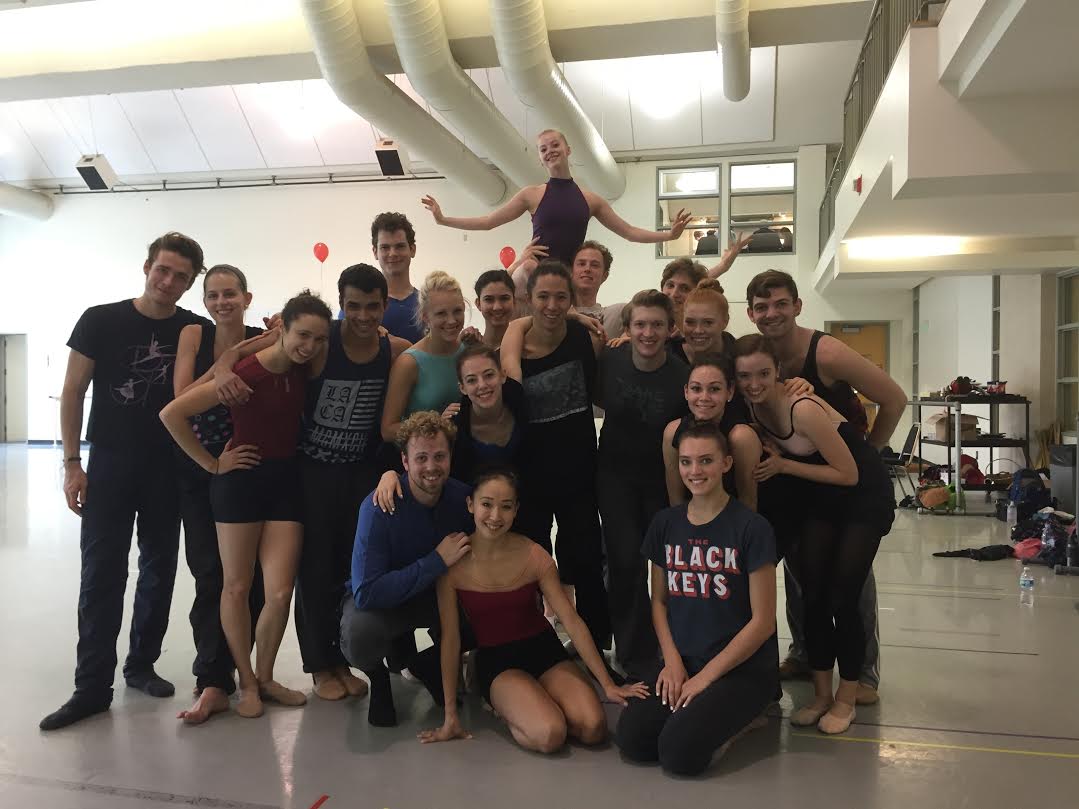 Says Michael, “I say, ‘Think about what the audience will walk away with.’ Personally, I like to walk away from a piece and it’s done something to me. Story, visual interest, something. I’m okay with pretty dancing, but do it on purpose. Show something—anger, frustration, relationships. They need to show up at the table.” It’s what he calls the “Alice in Wonderland Syndrome,” paraphrasing the Cheshire Cat: “If you don’t know where you’re going, then it doesn’t matter which way you go.” He adds that there’s a way in which Balanchine did a disservice to young choreographers, when he said, “I just go into the room and create.” For of course Mr. B. entered the studio already knowing the music he would use in great detail, along with possessing a great fund of ideas, experience and technique to inform what he did there. 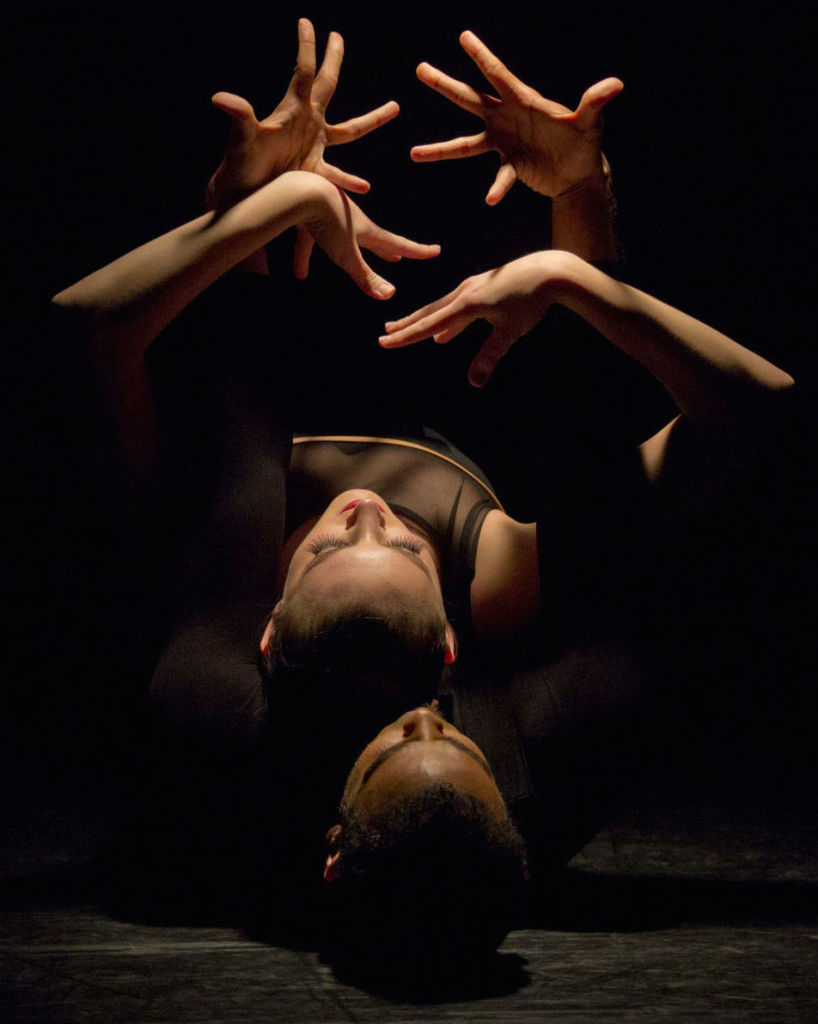 ‘Slight,’ an evocative meditation on light by Penny Saunders

I asked “But if the MOVEMEDIA emphasis—as in the program that came to Seattle—is now on more professional and polished work, what about the notion of bringing young choreographers along?” Michael says that GRB is still attending to them, sending out feelers, working on collaborations with companies to pool resources. “Choreographers need space to work, we have space, and so on.” The point, he notes, isn’t necessarily to produce a single great choreographer or great work, but to continue finding ways to provide a forum for exploration, for career purposes and for broadening out the experience and depth of the work, as well as to expose audiences to a whole new array of talent and approaches of dance. 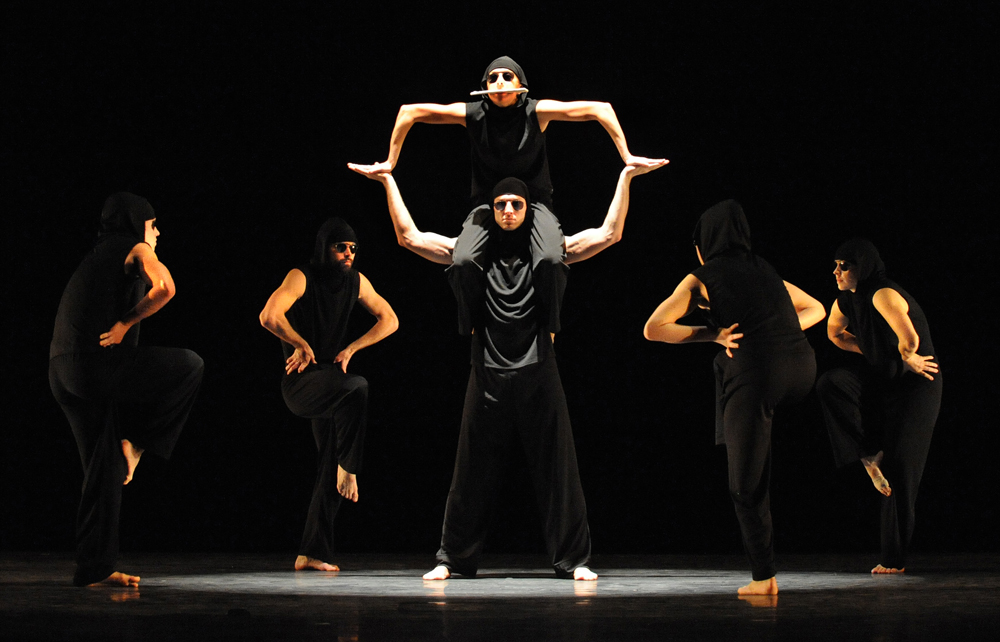 ‘The Envelope’ by David Parsons

“We are positioned at Grand Rapids so we can do really good contemporary dance,” he continues. “Our dancers learn fast and are flexible. GRB is larger than Aspen-Santa Fe, say, or Whim W’Him. It’s a middle-sized company. Annabelle’s Dangerous Liaisons

[whose US premiere will take place at GRB in February 2016] will have 20-22 dancers—a big stage, more people. It’s nice to see larger possibilities in the numbers of dancers.” 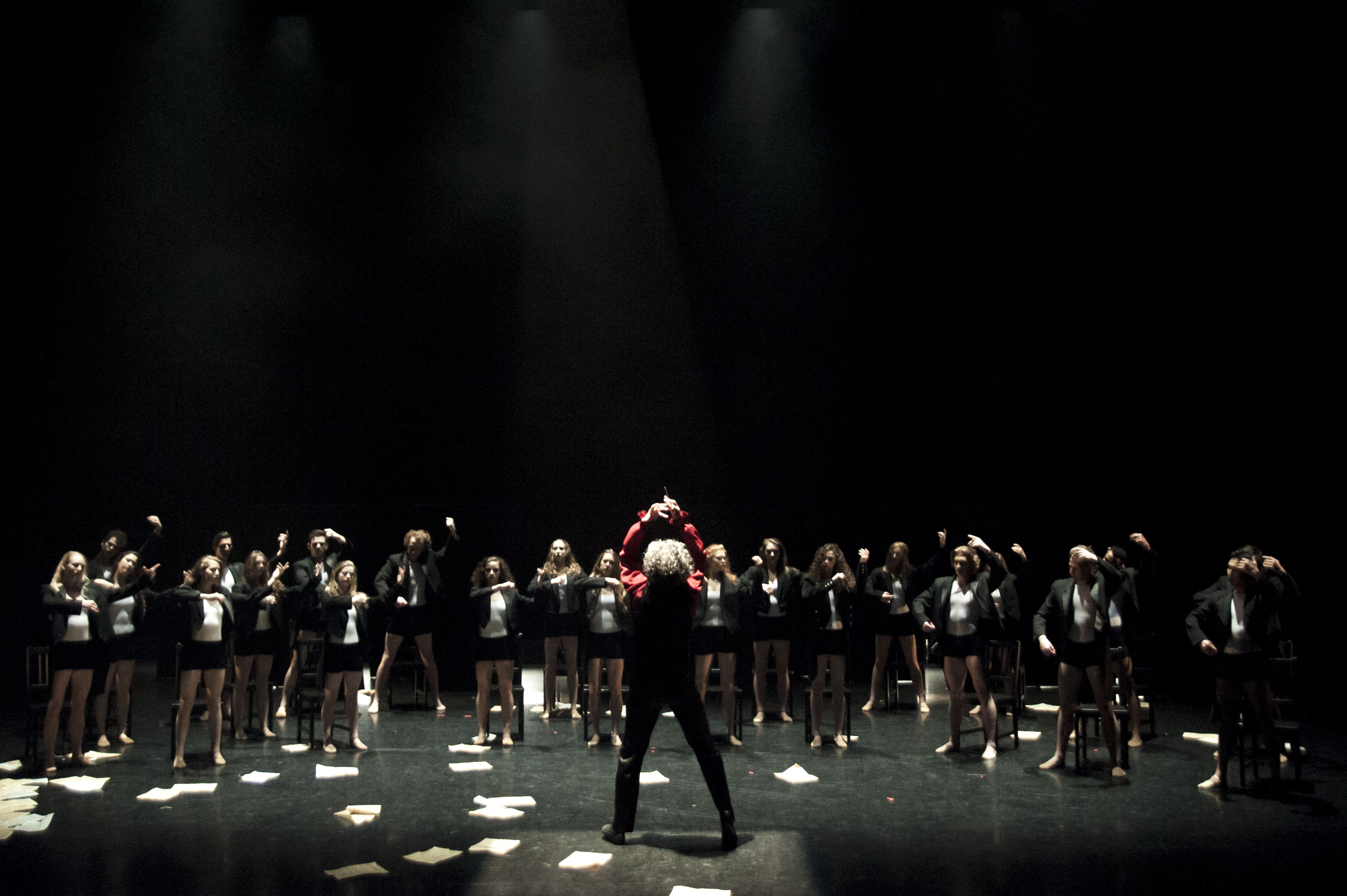 As the only professional ballet company in Michigan, GRB needs to continue covering the territory, as it still does every year in one or two productions of “old classics, done the traditional way.” But at least partly under the broadening influences of MOVEMEDIA, even the classics have been getting a new look in Grand Rapids. Michigan reviewer Jeffrey Kaczmarczyk wrote of Mário Radačovský’s Black Swan White Swan, “Great art is great, in part, because, whether it’s Shakespeare’s plays or Beethoven’s symphonies, it can be created new again.” In new works, such works as Black Swan, Annabelle’s Liaisons, and Olivier’s Midsummer, stories are told in a series of almost cinematic scenes. “People are comfortable with story,” notes Michael, “and these stories are told in 4-6 minute vignettes. It works well for the audience and lets choreographers show different qualities, temperaments, moods.”  At Grand Rapids Ballet, as old stories are reinvented and contemporary sensibilities investigated, a very old art form is being reinvigorated.