Last night at McCallum Hall Olivier Wevers/Whim W’Him won
The Dance Under the Stars Choreography Festival Competition
with his FRAGMENTS. The Grand Prize is a much-welcomed $5000. 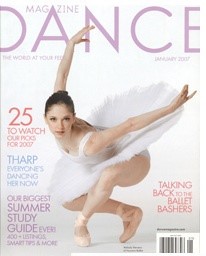 With the January 2011 Whim W’Him performances

at Intiman Theatre in Seattle,
Olivier will premiere Monster,
his exploration in duets of some of the darker sides of humanity.
When he began thinking about casting for the section about bad relationships,
a new face was needed for the female role
(Kaori Nakamura being pregnant).
A small, forceful, dramatic presence was called for.
Lucien naturally thought of Melody,
now a much fêted principal dancer at Houston Ballet.
Melody Herrera and Lucien Postlewaite.
Both strong and willful, sharp, gifted and emotionally intense,
they have known each other since the age of 9 or 10.
Their partnership had a rather rocky beginning,
at a performance of the Santa Cruz, CA school where they trained.
The flamboyant Melody, joking and playing games with her friends, was excited and rambunctious, she says. 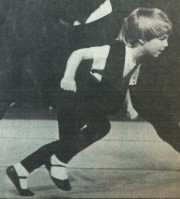 Lucien didn’t know her at all—
though as he says, “I could be pretty noisy myself.”
He charged up to announce,
“You know, you’re really loud!”
Melody: “I’m supposed to be loud. I’m Italian.”
Lucien: “Oh? Well, I’m French!”
End of encounter.
Next year in the Nutcracker they were Clara and the Prince.
Two years later, at 11 or 12, they did their first real pas de deux.
At that tender age, as she delicately puts is, “a boy doesn’t have much muscle mass.” Through the years of training, they were paired often. In a small school like theirs, Lucien was the only serious boy, consistently there. (As my son Tim once said, on being accepted a ballet school in France at age 12, “There’s a good exchange rate for boys in ballet, huh?”) Of course it meant sometimes other girl dancers were jealous that she always got to dance with him, which led to some tense moments, says Melody.
But together she and Lucien learned about partnering and grew up as dancers. Although they ultimately went on to dance with different companies and live very different lives, their careers have paralleled each other’s in many ways. 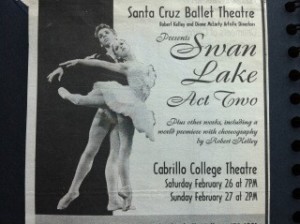 The core of the Monster segment that Lucien and Melody will dance
is somber, even savage in parts, not for the faint of heart:
A couple who cannot live with or without each other,
doing things that are scary and that they themselves hate… 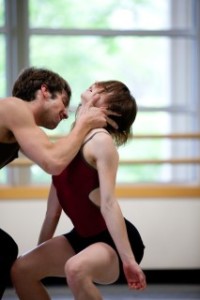 …though there are tender and touching moments too, what keeps them together, and times when the two of them seemed allied against forces they cannot control…

When I asked Melody and Lucien how they prepare for these roles, they each said they’d had harsh, confusing, and troubling experiences in their own separate lives to draw on.
“I have personal experience with that,” she says. “I know the reality, so it’s almost like type casting. It’s like therapy for me.”
For him, there are echoes in Monster of bad choices and hard times of his own.And yet it’s by not means a mere straight mapping of life onto dance. The process is far more subtle than that. Sometimes what is needed for the role is not known personally, “so then it’s acting.”
And there is always the need for the dancers to find a way to make the precise movements of this particular piece their own. There’s nothing generic about the progression from idea to art.
For Melody, the way into any piece, she says, is via the music.
Olivier got at the kernel of the relationships section of Monster, by dealing with the music in a curious way. At the beginning, he choreographed to a sound track of sirens, almost like an ambulance, and synthesized sounds. Discordant and anxiety producing.
Then, he would have Melody and Lucien dance the same segment to the actual music. It’s beautiful, soft, gentle music, in jarring conflict with the emotional extremity of the dance.
The contrast is very powerful—all that bad stuff felt and stored up inside, but not expressed in the overt music.

The long-time closeness of Lucien and Melody as ballet partners enables them to mutually comprehend and deeply embody such a complex and terribly dysfunctional relation,
yet still maintain their private integrity and professional camaraderie.

And for me, at least, one of the miracles of the performing arts, especially dance, is just this—
how the ideas of a choreographer 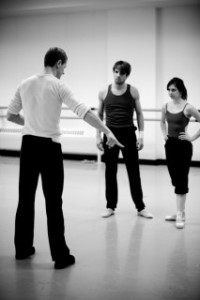 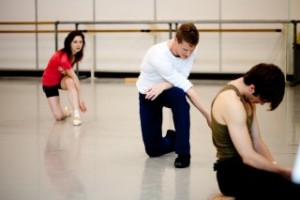 can be transmuted into a form, both abstracted and highly specific, that allows dancers to breathe life into it—via extrapolation, experience, and imagination—so its essence can be absorbed and recognized by the highly varied individualities of the audience members.

•Photos, unless noted below, are by La Vie Photography LaViePhoto.com