Michael is a master of light.

He is hesitant to talk about how he uses “photons to evoke feelings both emotional and physical—which then perhaps these might be articulated into intellectual constructs—but as it’s so transitory, nailing it down seems so difficult.”
Difficult but far from impossible.
The lighting designer deals with space and time, especially in dance. Michael talks about liking to architect a space with lighting, so that it coincides with the physical action of dance and becomes mysterious, enchanting, bold—consonant with whatever mood the piece needs to invoke. The lighting for Whim W’Him‘s first show began, he says, with interchanges with Olivier and information about the space in which the piece would take place. From these two separate piles of information, he constructed a box of tools.
Light follows the choreographic impulse. This whole show is danced on a white floor. Michael and Olivier agreed without saying that the brightness of white floor and cyclorama can almost be too much for audience connection, but it allows for wide range and subtle play of mood: 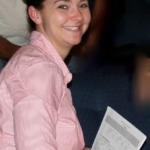 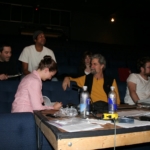 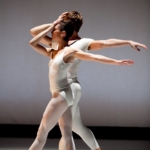 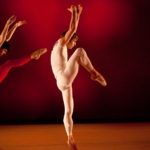 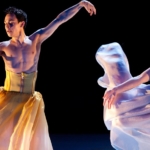 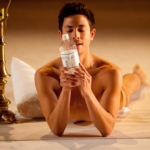 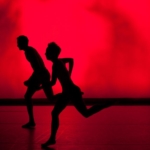 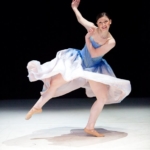 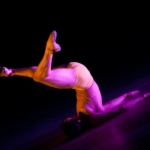 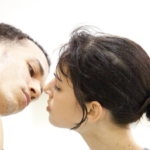 X stasis begins in white, clean, clear, almost brittle light, to reflect (literally and figuratively) the choreography. Through the next three duets, the texture of background and floor lighting changes. Color is introduced. Relationships become less reserved, more complex, perhaps more equivocal, until at the end a thudding heartbeat pulses through music dance and the blood red of costumes and light explode in ‘Cardiac Arrest’…
In FRAGMENTS the backdrop is dark. Color resides mainly on the two dancers’ wonderful skirts—one in blues, one in yellow—which fly up, swirl, waft down, caught in mid-air by light. And then there is the riveting solo, where Vincent sheds skirt and artifice and dances, through slow, revelatory contortions, body stripped, spirit bared and burnished by the light…
3Seasons, says Michael, “had a tight vocabulary, particularly a way to push in a slightly literal sense of weather—and what weather can evoke, both emotionally and intellectually.”
The use of white light, from cold to warm.
Texture on the cyclo.
Interior vs exterior space.
In one solo 3Seasons, again of Vincent, he is lifted by other dancers and set on a new path several times. The stage transforms into darkness, but he follows a path of light in his triangular trajectory across downstage (audience) left to right, upstage, diagonally downstage and again across. The first time he moves straight across it is into the light; on his return, in the same direction, the light is behind him. The interesting thing about facts like these is that, perhaps more than any other single element of the show, lighting adds a crucial layer of mood, of which the audience is often only unconsciously aware.
In the penultimate bit before the “dirty hands” sequence when Kaori ends up in the garbage can, the skin of Jim, the hoarder, glistens with gold and lavender light. This was not anything that Michael had ever done before. Olivier helped him find what was needed by saying, “I need mystery, it’s the most beautiful piece of music.” There is also a very nice transitional moment where the company walks stage right to stage left. They go slowly. It takes a whole minute. The light and music gets stormy then glows on the bodies of the dancers. “That passage of time is exquisite,” says Michael. “I can feel it in my eyeballs.”
But marvelous as the still photos are in capturing dancers’ individuality and moments of the dance, they are frustrating because they cannot show passage of time…
Although a recording (Joshua Bell) of the Vivaldi score was used in these shows—for all three seasons where Byron Au Yong‘s compositions weren’t performed—one aspect is always live. Or rather, although there is software that can lock in the sequence of lighting cues, there is much more to it.
“It is easy to be off by less than 1/2 half a second and not achieve the desired result, even though a lighting computer is being used—accurate to 1/100 of a second, says Michael Mazzola. “No matter how wonderful each cue is, the lighting is dependent upon the stage manager to execute the calling of the cues such that they are placed at the optimum possible location in time, so the lighting state and the movement/music coincide” to produce the precise desired meaning.
“It’s still a very human action driving the cueing.”
An example: in the segment known to the dancers as “the kiss,” Kylie and Ty move sinuously around the stage their lips pursed toward each other but barely not touching, the movement of the rest of their bodies informed and informed by their lips. Before this sequence, Ty leaves Kylie and strides diagonally downstage, she pursues him. A spotlight goes on when she gets there, but the real moment for the lighting cue is when he turns toward her. In these slight but significant instances, when the stage manager places light in exact relation to the music and movement, the layers of lighting build up and lead to…magic.
olivierwevers2018-02-15T11:19:14-08:00January 31st, 2010|