In some ways the Whim W’Him moments I love best are when choreographer/artistic director Olivier Wevers is working with 1, 2 or a few dancers to draw out the meaning of a piece. Friday morning, Olivier and Jesse Sani explored his solo in FRAGMENTS, which he will dance in Whim W’Him’s Third Degree* program with Lara Seefeldt. Earlier  I’d asked Jesse whether he’d seen a video of this piece before arriving a few days before from Philadelphia, where he dances with BalletX. He had not. In fact he only found out he was to dance FRAGMENTS on April 23, just at the end of the BalletX spring series. 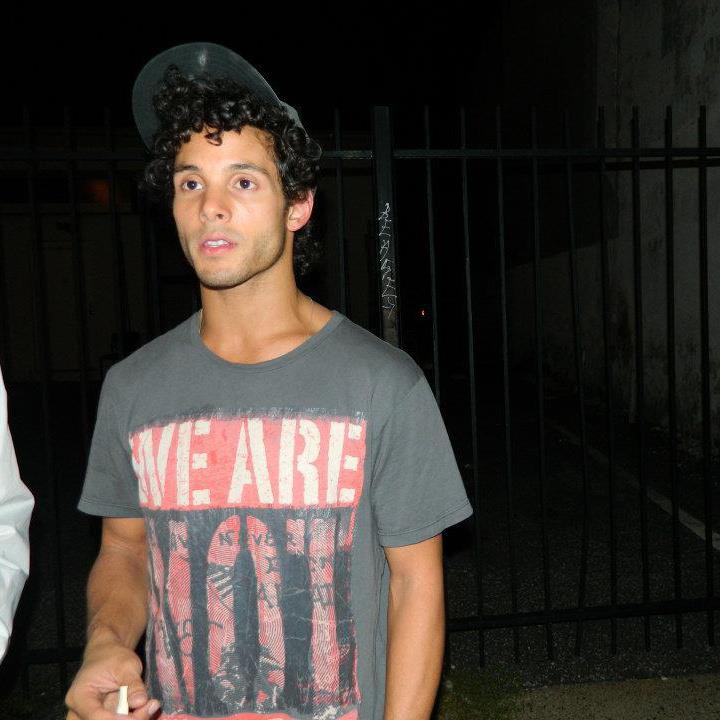 “You’re a quick study,” I remarked after I’d watched one of his first Whim W’Him rehearsals. “Yes,” he agreed, “and you have to be open and ready to learn. Especially when you do a lot of free-lancing and guesting, there’s always a time crunch.” At BalletX, too—where new works of 3 choreographers are created and danced within the space of 5 weeks—he has to learn fast.

Jesse grew up in Nazareth, Pennsylvania, in a very physically active family (his father was a karate instructor, from Indonesia). As a kid, he did ice skating for 4 years. Then, at the Lehigh Valley Charter School for the Performing Arts, he gravitated toward musical theater and studied music and percussion, getting a good grounding in musical theory and rhythm. In the marching band throughout high school, he played a bass drum in his first year. “I couldn’t see over it and there were 4 other bass drums. You had to be in step and in formation.” The 11 minute routines went through 60-70 different positions. “Multitasking,” he adds, “great training for ballet.” Of FRAGMENTS he said this week, “The sooner I can get a skeleton in my head, a blueprint, the more time I’ll have to clean it.”

Following high school Jesse focused on dance, studying in Miami at New World School of the Arts and with Momentum Dance Company and later on scholarship at New York’s Ailey School and at Jacob’s Pillow. He then went on to dance with PHILADANCO and, for the last two seasons, BalletX. It’s an exciting life, he avows, “very different than if I’d gone into academia, say.” 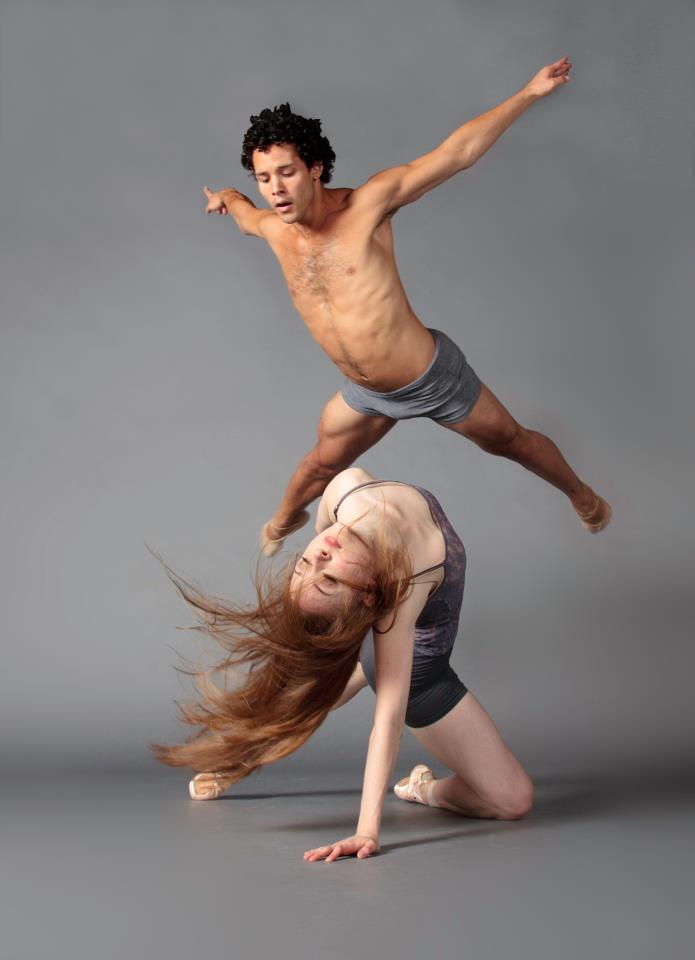 Yet dance is not Jesse’s only window on the world. Outside the dance studio, he has another life too, as a free-lance visual artist. There, he can “take a step back. Painting I never have to train for. It’s a different kind of outlet.” He does oil painting on big canvases and mixed media—for example, water color and pencil—often with figures. At the spring series of BalletX at the Wilma Theater, there was an exhibition in the theater of his paintings. But “I don’t want to be a famous artist,” he says. Rather, “it’s another release,” from the discipline of dance with its daily company class and exacting injunctions of choreographers.

Although I have seen FRAGMENTS rehearsed and performed on numerous occasions, Friday I learned something quite new about it. As Olivier and Jesse worked on his solo, I saw how it is not only, as I’ve always thought, a meditation on the baring or unmasking of one’s soul. It is also about learning, about finding out what that soul is, what it’s made of, what it wants to be, what it can do. 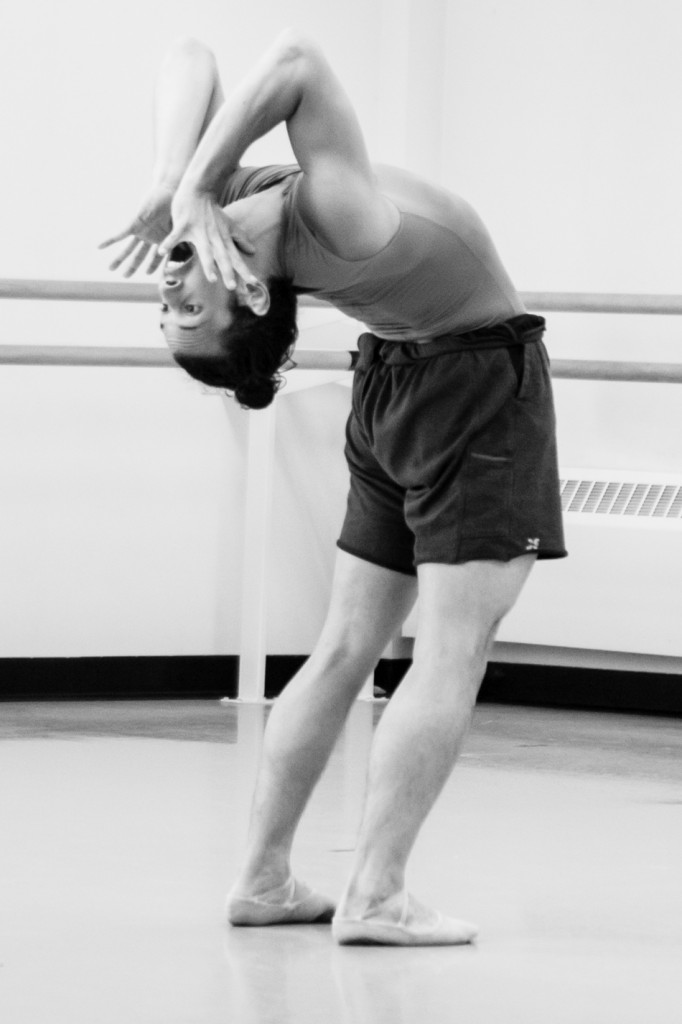 As Jesse went through various segments of the solo, Olivier would say, “There are lots of nice things in there,” then go on to make observations like: “I like the challenge of not knowing where you’re going to go” or “Just search for new things every time.” And I realized that each movement Jesse makes is supposed to feel surprising to him, and that his sense of newness and wonder is what should communicate to the audience. “Try not to be too pose-y in some of those positions,” Olivier said. “They’re beautiful, but don’t be too aware instead of discovering.” He paused. “A young buck learning to move.”
That alert and watchful look, wary but curious. 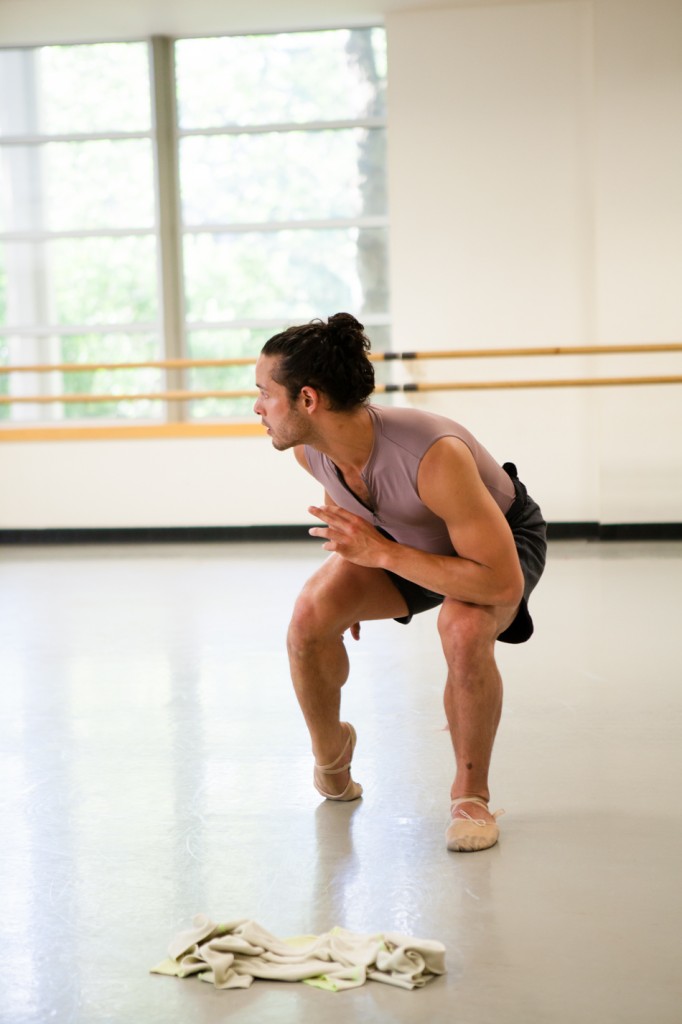 At one point Jesse remarked, “The simpler the better, I think. Sometimes I put in a lot of flourishes, indulging.” There are long, held moments in this solo. Not so easy, physically or mentally. Jesse smiled and said, “A millisecond of holding you know, for a dancer, you wonder why you aren’t moving…” There is tension in waiting. “This has a lot to do with stillness,” Olivier added, ” quiet where almost nothing happens.” But something does happen. Something small that grows. “Once you get into a rhythm,” he said, “change it. Let it happen, don’t plan. Start with something else every time. Think of a different part of the body.” It was magical, witnessing the intention behind each movement unfold.

As rehearsal ended, Jesse said something about finding the freedom in the role. Olivier retorted with a laugh, “Just so you remember the rules. There are a lot of rules. This is not a free improv. It’s a very structured improv.” Like a tightly controlled sort of poetry, a villanelle or sestina. Individuality discovered within the confines of rigidly ordered form. 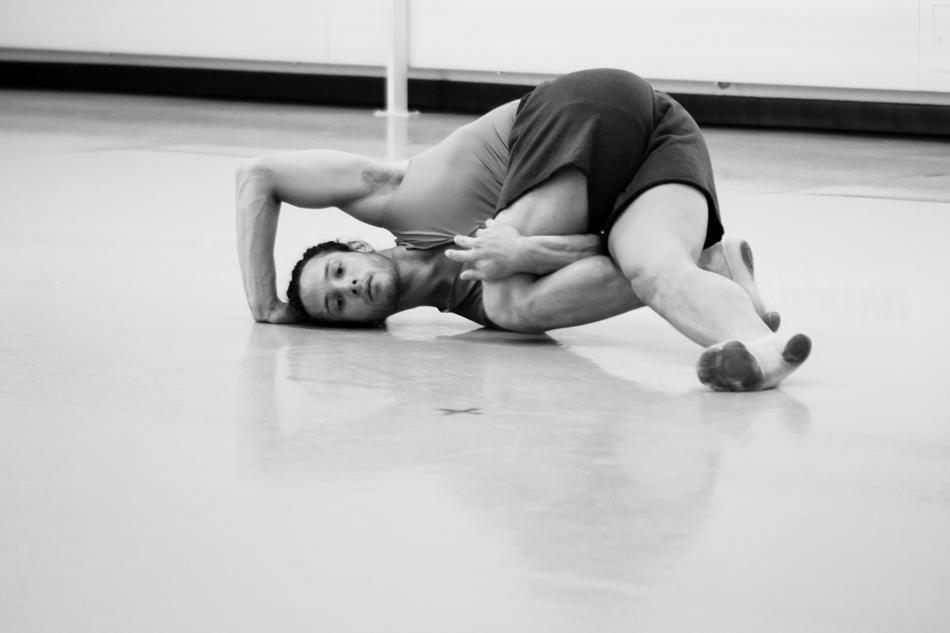