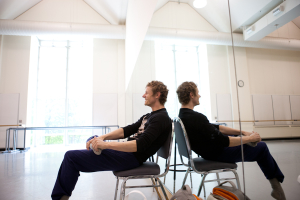 So often dance, even if meant to be funny, is performed by dancers with serious faces. Dancers’ stern demeanor can be part of the joke. The brilliant smiles of classical ballet sometimes seem pasted on, part of carefully learned technique, rather than expressions of genuine amusement or joy. What is quite rare, at least in my experience, is real laughter on stage. I don’t know what the characteristic expression of Olivier Wever’s newest work will be once it’s actually being performed, but it is a treat to see so much humor in the studio. 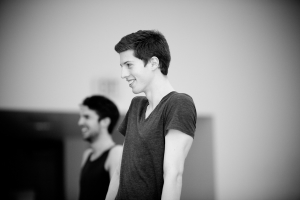 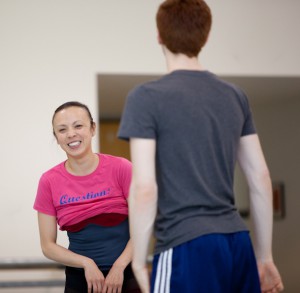 What I noticed most about pictures of his new piece (still unnamed), as it was photographed in earlier rehearsals by Kim and Adam Bamberg’s when I was out of town, was the camaraderie, verve and high spirits of Olivier and the three dancers—Kaori Nakamura, back after having her baby Maia, Andrew Bartee and Lucien Postlewaite—as they worked through the complex, demanding movements and relaxed afterword…

I saw the piece in person at its first complete run-through last week. Full of marvelous energy, it is sixteen minutes of almost perpetual motion for the dancers. Despite being in top physical condition, near the end of the ballet season, they were all exhausted when the first run-through was over. Olivier said later that the end was rather a mess and that there is a lot of fine-tuning still to be done, but they were all exhilarated by how it is shaping up and how far it has come already.