journey to self – Olivier Wevers

Cannibalistic Sanctuary, by Whim W’Him artistic director and choreographer Olivier Wevers, has had a rather bumpy gestation period. Started last year for the January 2022 program, it was postponed until next week’s opening.* Ten days or so ago the piece had been completed and Olivier was pleased with how it had turned out. He was looking forward to a period of further refinement in which he could play with it and clean up details, “the luxury of creation.” But then Covid reared its head, striking Oliver so that the dancers (two of whom were hit by the virus as well) finished pre-theater-week rehearsals without the choreographer on the scene. All was expected to be ready for the opening, but a few days later in another plot twist, due to unforeseen circumstances the opening weekend’s performances had to be cancelled (first time in Whim W’Him history). As I write this, however, the company is rehearsing with dancer Kyle Sangil who has flown in from Houston, and the second week’s shows at Cornish, as well as those on Vashon and Whidbey Islands, will proceed as scheduled.

This is a complex work. “There are lots of things loaded in there,” he says. “So, Cannibalistic Sanctuary. I hate to be so literal about it, but it’s really about one’s self-discovery, self-acceptance, the journey through life, having to find ourselves. The ‘Cannibalistic’ is because we have a tendency to be destructive with ourselves, to do things that are not good for us but they feel good. They make us forget our journey or feel better about our journey. So it’s that idea of being cannibalistic to ourselves, to hurt ourselves, to eat ourselves away. And ‘Sanctuary’ is really finding our inner sanctuary, who we are and what is life’s meaning—everything, the whole.” 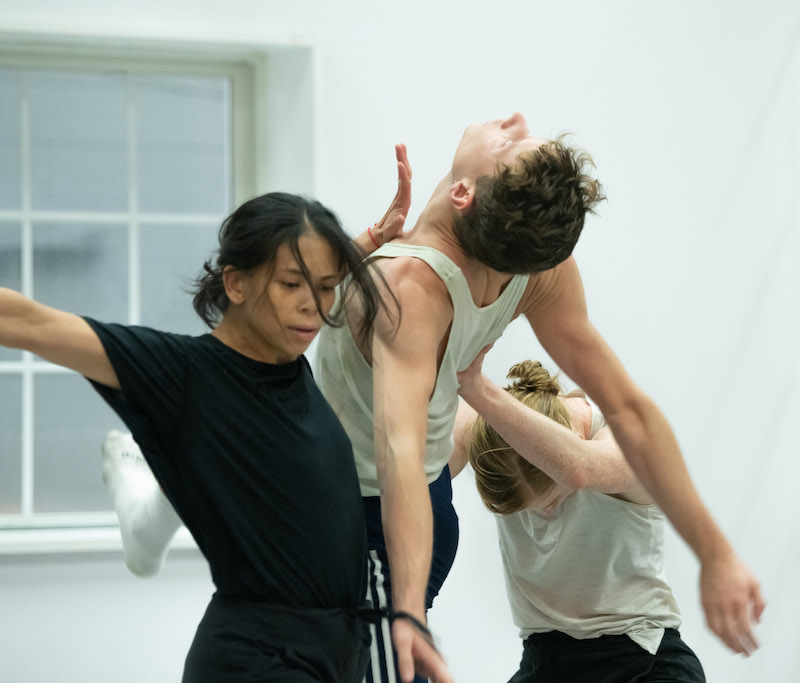 Olivier acknowledges that CS is “super-personal to me. I’m okay saying that.” But, he adds, “It’s not a straightforward narrative from start to finish.” Far from being a one-to-one translation of particular events, people or relationships in his life, Olivier muses that, “I’ve realized my choreographic work is a lot more visual. I think I’m really starting to recognize that my passion for movement is in storytelling, in imagery, creating images. So theater is part of that.” 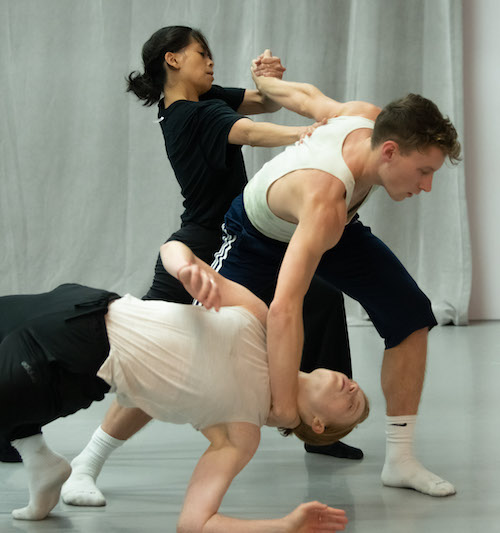 The piece “opens with an inner dialogue that Andy [Andrew McShea], the main character, is having with himself. He’s on his self-discovery journey. And so he will also be talking on a microphone, questioning himself,  responding to himself.” Jane Cracovaner and Liane Aung as dual (and all too often dueling) selves, represent the contradictory possibilities that we all hold inside us—the male and female, the yin and the yang, the good and the bad, the ugly and the pretty. 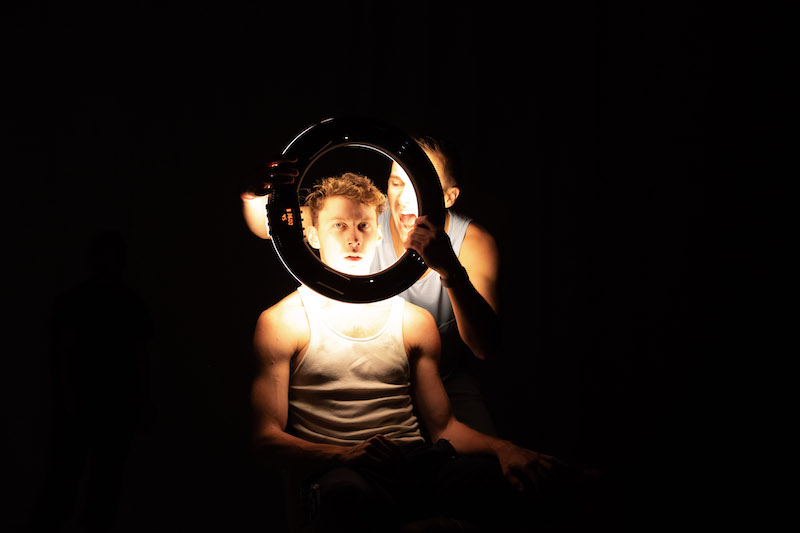 “Then,” Olivier continues, “I have a lot of images of my father in there , who I realize really kind of… I don’t know if I want to say ‘tainted’ my life or shaped it…” ‘Marked it?’ I suggest. The relationship was “definitely influential in who I am and am becoming, and mostly not in a good way.” And so Andy’s inner turmoil devolves into a moment with “the ring light, that represent a mirror—because part of what’s going on in my head, the more I see pictures of my dad, and the more I see pictures of me aging, the more I start to look like him. 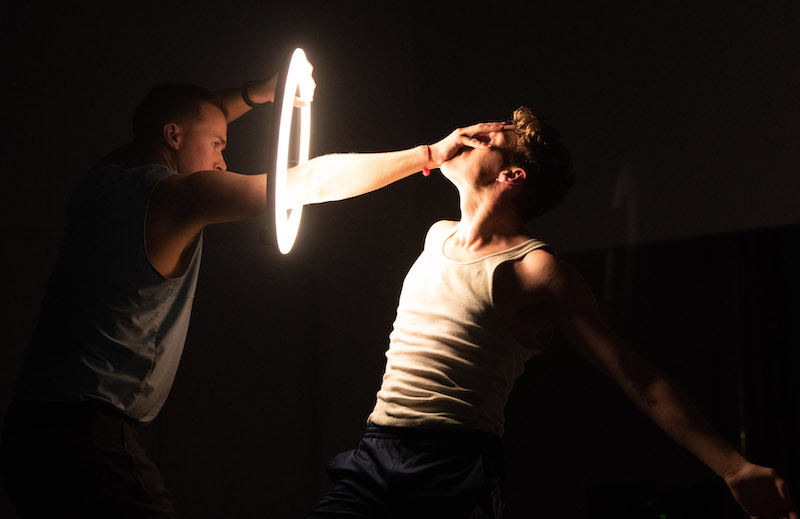 “Which is a frightening… Yeah! Not something that I’m proud of or makes me happy. The whole section is like looking in the mirror and realizing that I do look like him.

“That scares me because there is a lot of him that I don’t want to become. He was never a great inspiration to me—mostly everything I don’t want to be.” In CS, Karl Watson represents the father, “my father figure, which was always dominating, that I was always afraid of, yet always trying to please and get approval from.” 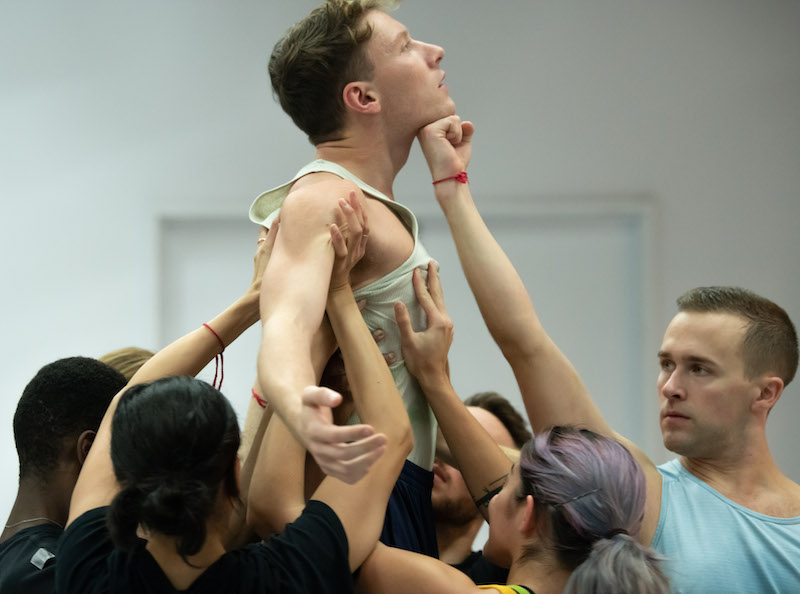 But the next section, featuring Nell Josephine points to a way out. The original duet has been totally re-choreographed.

In this brand new segment, “Nell embodies creativity, imagination, escapism, everything that kept me alive and optimistic growing up, everything that kept my imagination going when I was feeling lonely and depressed at home—it’s like going to ballet class and being able to escape and dream of a life away. Nell represents the spark to happiness and fulfillment. Whatever’s in Andy’s imagination, whatever is in his head that gets him to evade reality and be creative.” 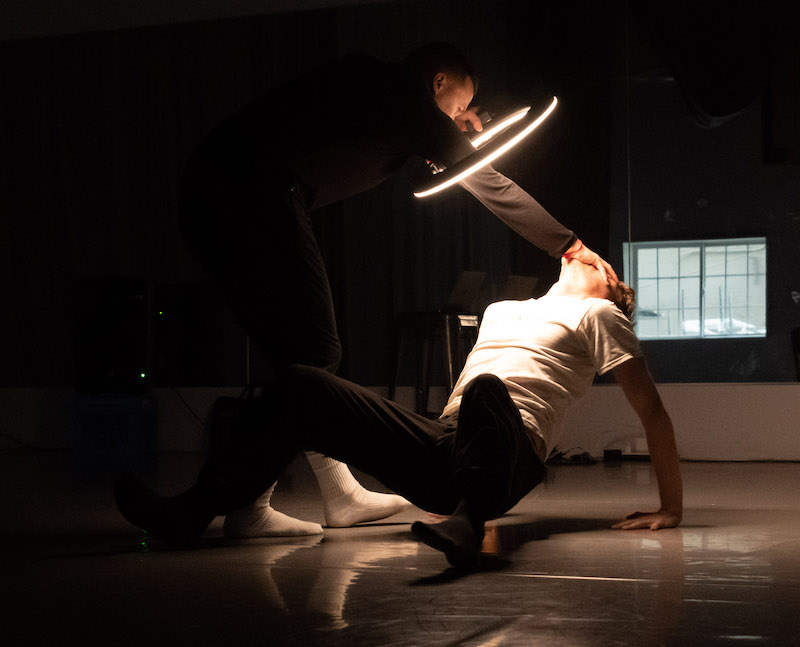 The theme of creative escape is further explored via one of those passages in Olivier’s work where all the individuated characters merge into the group. “I also have a lot in there about trains and stations and that has to do with leaving, traveling, running away,” he says. “I’ve always romanticized train travel. I’ve always dreamed of doing the Orient Express. It probably would be claustrophobic and boring, but I have this romantic idea that it’s a way to see the world comfortably. So I wanted to use that in the sound track. Not a total escape. Rather wanting to explore something new, the journey to discovery. An invitation to discovery.” So beyond mere escape is the lure of adventure, of something better—different, transforming—that exists outside and away from any bad, closed in, lonely moment. 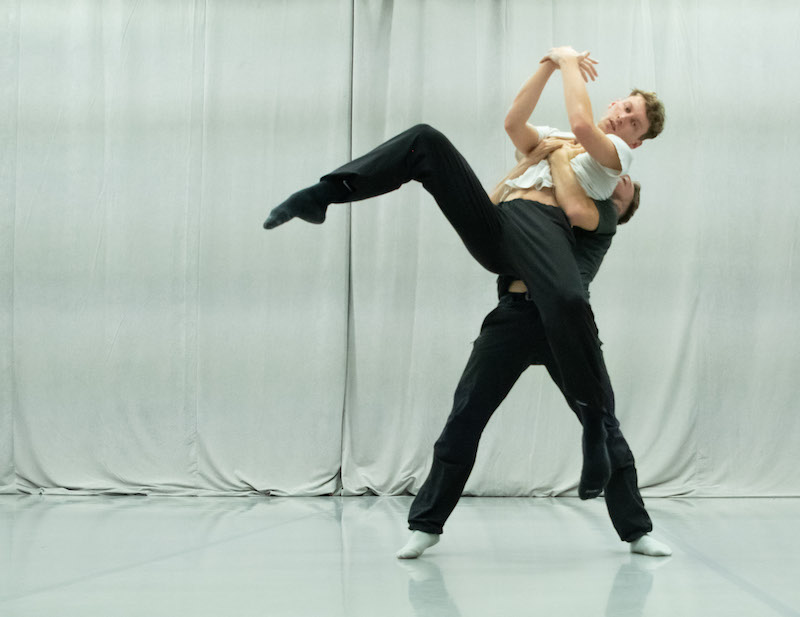 Sometimes, there occurs what Olivier calls “this Giant teddy bear moment,” in which, in CS, a giant teddy bear hangs above the stage. “That came from when my dad passed, I had a Shamanic journey done by a healer my husband and I regularly connect with. And one of the images that she shared is the one I’m using for this, quite literally. She ended up in a giant forest which felt quite Northwest-like. And she said she noticed this little kid holding a teddy bear, watching a giant bear walking through the forest. And somehow it really touched me, it spoke of the way I felt about my dad, which is kind of as a beastly creature, that I don’t have much in common with, that I was always afraid of, always watching out for, that wasn’t really an inspiration for anything. It’s not like I wanted to become like him—I didn’t want to be part of his world. So that was a powerful image that I got from this Shamanic journey.”

“There is one instant where Andy tries to go and reach for it, very very briefly—and of course he doesn’t reach it, doesn’t touch it. Those two seconds portray perfectly the relationship with my dad. And I feel like maybe I tried or maybe I didn’t try enough, but it just never happened. And in another image Andy is on top of this creature and they’re walking very slowly, and Jane is creating this big jaw at the front. It’s kind of like the idea of the little kid traveling on this creature that is also kind of frightening.” Olivier will use giant shadows with lights projector as an effect for the scene. “After that what happens? It goes back into the train, the traveling, the exploration…searching for oneself. And realizing that I didn’t really need my dad for that.” 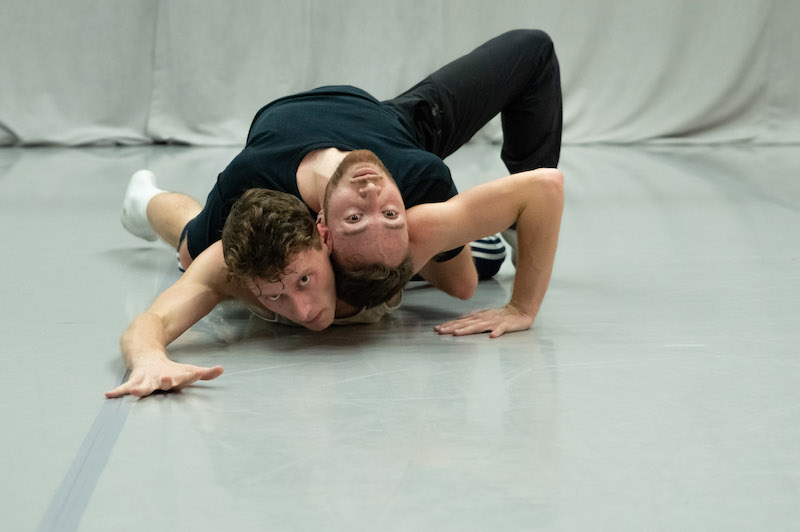 The next stage of journeying into self-acceptance is expressed in a duet between Michael and Andy “that represents the dual personalities in ourselves. all our contrasts, all of our oppositions in who we are. And the idea that they intersect and need harmony to create a balanced equilibrium. The end of the piece is Andy kind of walking, sitting on Michael’s butt and Michael is upside down with his butt up.

It’s referring to creature-walking, but also that you’re never walking alone. You are always walking with your dualities and contrasts,” even of the negative elements, for the beast is never entirely excised. “We are a beast, kind of. That’s the journey it takes us through.”

Of Cannibalistic Sanctuary in its present form, Olivier says, “I’m pretty excited and pretty glad we didn’t do it in January. Now I feel good about every section. I added some new things,” especially the Nell and Andy duet—he also added in “a 30 second dance party, when Andy takes the mic and says, ‘I need a 30 sec. dance party,’ because I could have used more dance party breaks growing up.”

VASHON CENTER
FOR THE ARTS

WHIDBEY ISLAND
CENTER FOR THE ARTS