From a very young age in Sioux Falls, South Dakota, Justin Reiter was jumping and doing cartwheels in the back yard. “I was the black sheep of my family with regard to sports—
I grew up in a family of golfers and athletes when all I wanted to do was sing and bounce around.” He was 16 before he started dance training. 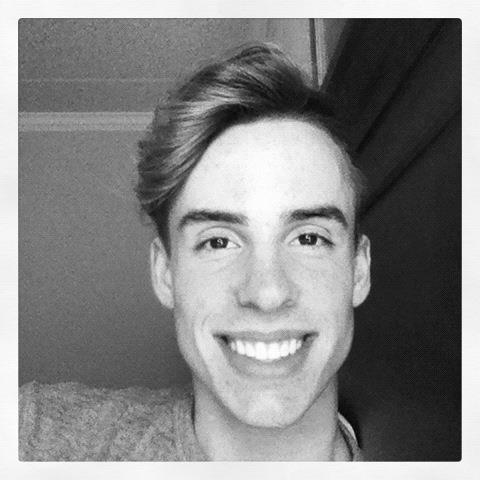 It began with musical theater, singing and dancing. He was in the musicals choir, acted as dance captain and took on the role of a fork in a high school production of Beauty & the Beast. Observing him perform, one of the teachers said, “Why don’t you try dance?” 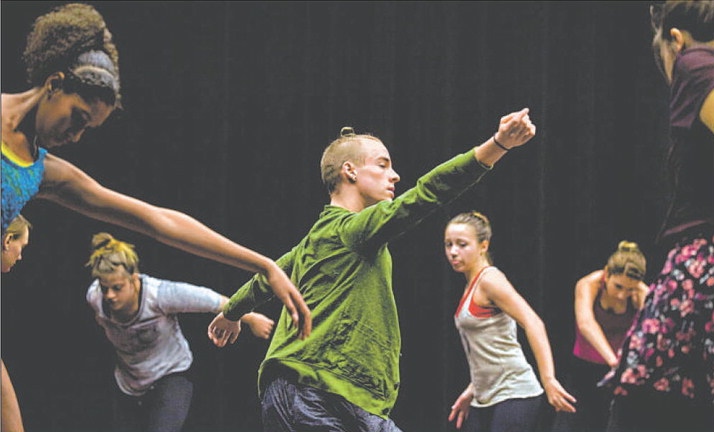 He did, signing up for jazz dance and hip-hop. It was, as he says, “Love at first step.” When some time later he learned it was possible to go to the university in dance,
he knew that was what he wanted.

Despite, or perhaps because of being a late starter in dance, Justin seems to have been unusually clear about the direction he intended to go. It helped, of course, to have supportive parents. His mom was enthusiastic all along—she’s a singer, with South Dakota Symphony Orchestra. His dad felt a bit more hesitant, concerned about the career aspect. How you earn a living being a dancer? But each time he’s seen his son perform, he has become more enthusiastic and now is completely behind him. 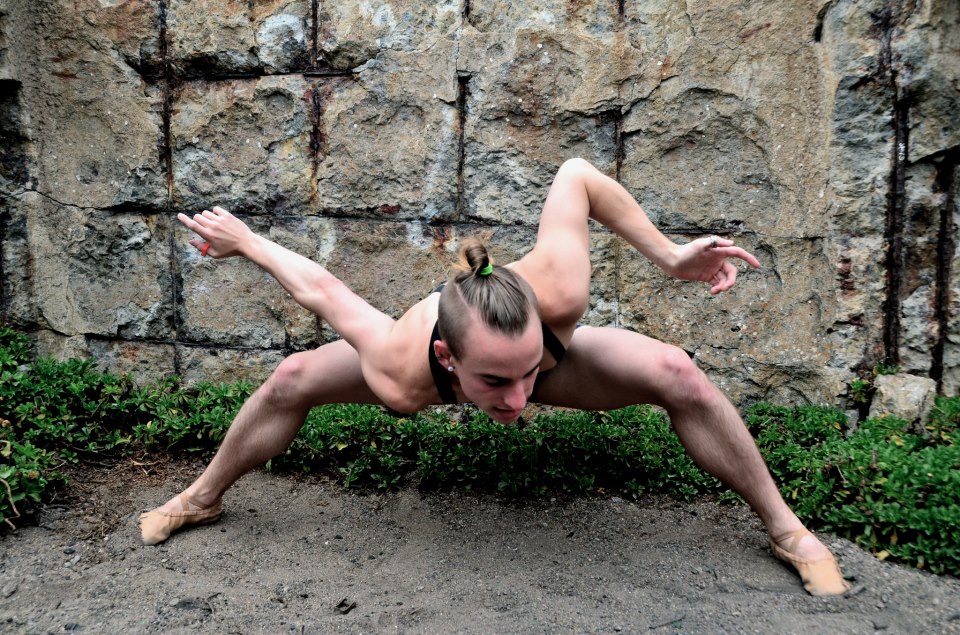 After a year or so of dance training, Justin applied and was admitted to the University of Minnesota in a highly regarded program where, as he puts it, they are “rewriting dance history for a more contemporary sensibility.” After four years of technique, performance, dance studies, and composition, he received his BFA degree in Dance.

Each summer during his college years, he would try a different training programs in a different state or country. Royal Winnipeg Ballet School. The Ailey School in New York. The LINES Ballet School in San Francisco. Netherlands Dance Theater Summer Intensive. Justin’s need for professional rigor and his wanderlust were both satisfied by these forays. “Dancing is the skill that provides the opportunities,” he observes. 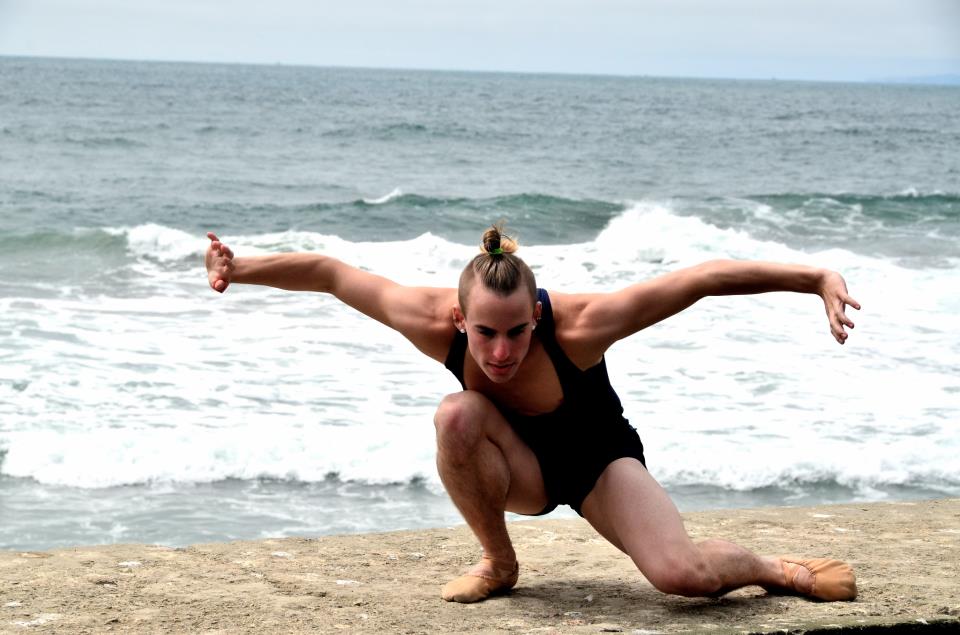 His final year at the University of Minnesota, Justin auditioned for Donald Byrd.
After a month in the Netherlands that summer, he was contacted by Donald and came to Seattle to spend a year at Spectrum Dance Theater. He arrived with two suitcases and a backpack to his name and lived in a tiny 100 sq ft. apartment. Justin notes “some cool parallels between Minneapolis and Seattle. The atmosphere is nourishing to the arts in both cities.” Here, in addition, “There are mountains every day and water all around too.”

Moving to Seattle and exploring the scene, Justin says, he reached out to artistic director Olivier Wevers after seeing Whim W’Him perform. When Olivier was looking for a dancer this summer, he did some work with Justin in the studio. My audition,” says Justin, “included bits of Whim W’Him choreo, as well as some improvisation. I think Olivier wanted to see me move in his aesthetic and in my own while making sure that we had a cohesive vibe.” Justin was invited into the company.

By the time of our conversation this week, Justin had only had a week and a half of rehearsal so far, but “it already feels like home. I love the collaborative environment that Olivier fosters, his collaborative nature and his community here.” This weekend, Justin performs for the first time in Whim W’Him, as the annoying uninvited guest of the screwy Les Sylphides dinner party in Firebird at the Meydenbauer Center with Ballet Bellevue.

[Tickets at: Whim W’Him in Bellevue.] 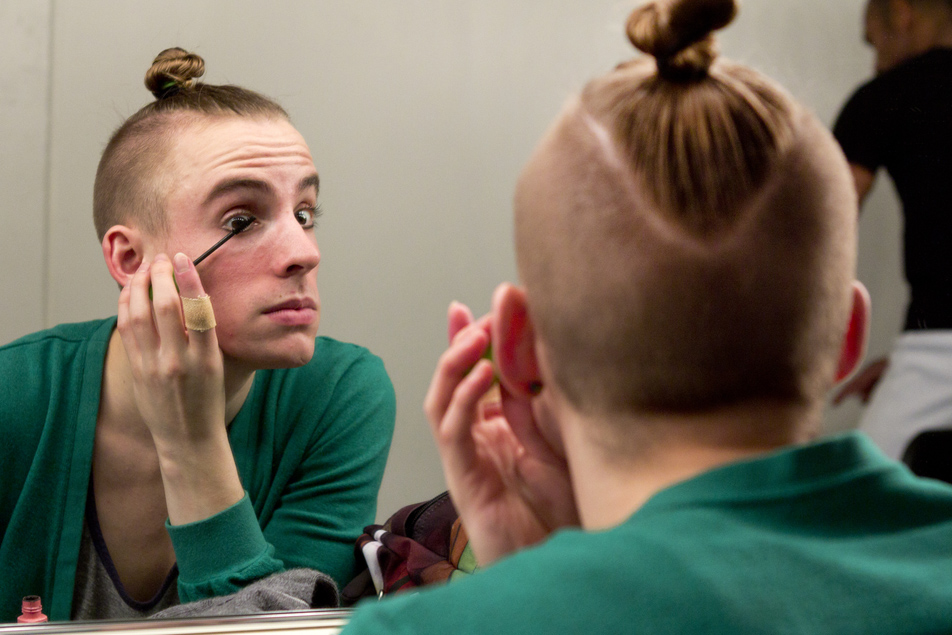 What does Justin do outside dance? He works at Lulu Lemon. “Retail is another love.” And he teaches yoga. His first year in Seattle, he says he found the yoga studio “a sanctuary. It repairs the body and keeps me in shape while not in rehearsal.
It’s a huge part of me here.”

He adds, “I also love coffee and sushi and cooking. Baking too. Gluten free, so that’s a challenge.” Other things Justin enjoys include using his hands too, crocheting, hats, scarves, mittens. Writing letters and postcards, on paper, and mailing them with stamps. Singing. Netflix and travel. More travel, he remarks, is “a goal of Whim W’Him and me.” He likes the idea of “leaving a footprint in different places.” Dance is a universal language and the dance world is very small. The combination of journeying with a dance “family” that becomes closer en route, while stretching out to explore new things, is irresistible. 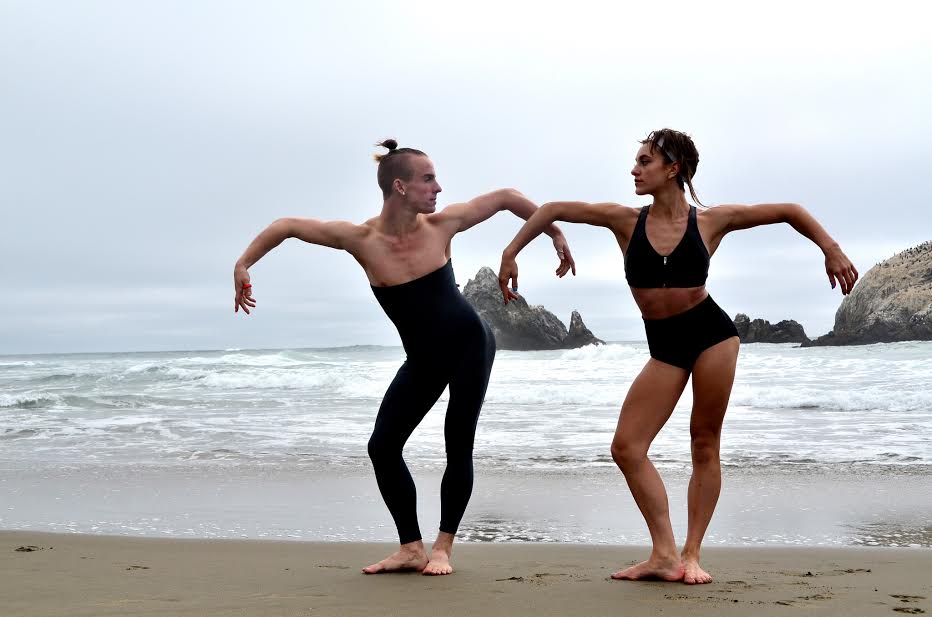 So what might be next? It’s early days yet to ask, but what about after dance? He can see yoga and Lulu Lemon as part of his future. His face turns serious, “And I will always be a champion for dance. If I struck it rich I’d fund something big.” If he continues to dance on into his thirties, he says, “I’d maybe like to go back to school and get an MA in dance studies. No urge toward choreography, at least not yet. Possibly teaching at a college level eventually.” As he said about the Minnesota dance program, “Rewriting dance for a contemporary sensibility.” 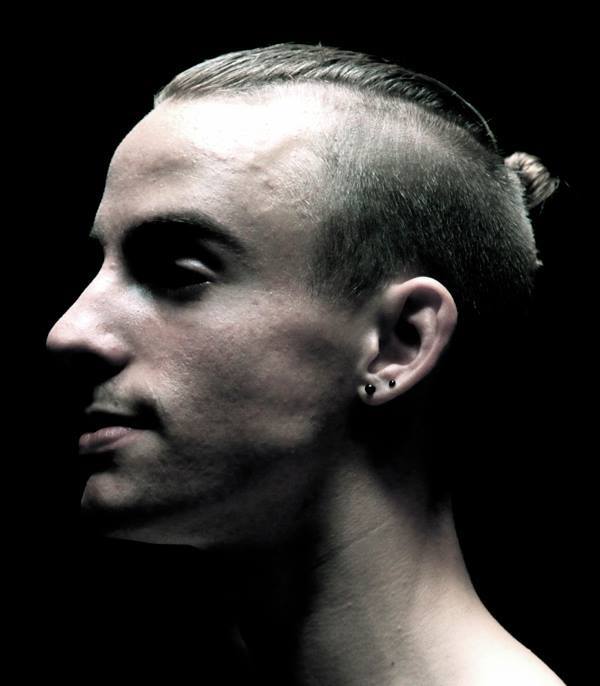