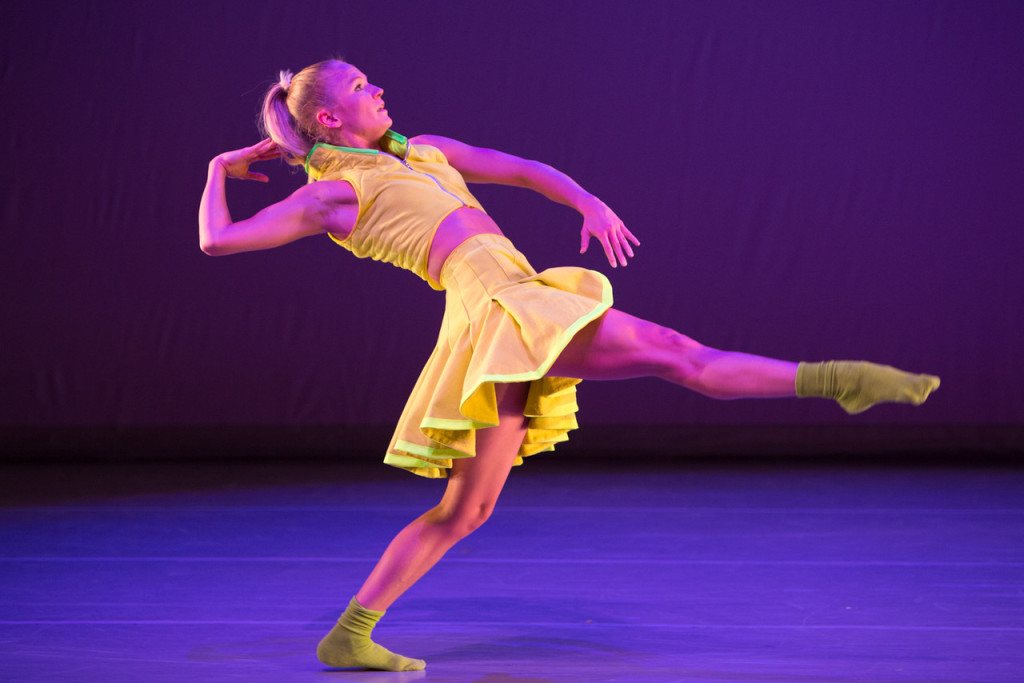 First up on the program was Brahms and Tights, by Whim W’Him artistic director Olivier Wevers. “For this piece, it was definitely the music,” he said. “I love classical music and I love Brahms,” and from the beginning, he had a look for the piece in mind—”brilliant colors for the costumes, a purple pinkish glow of light, a sort of undersea feeling.”
What he didn’t have worked out at all when he first entered the studio was particular steps. Throughout the process of creation, what he sought most was an intention, a certain quality of fluid motion. 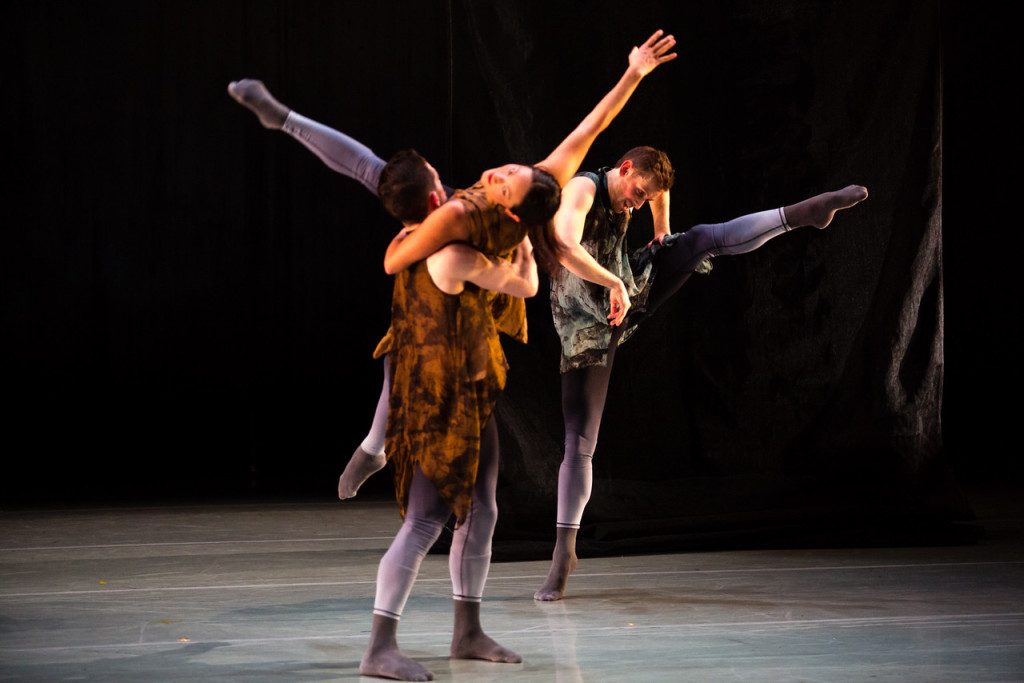 Well-loved local choreographer, Mark Haim, whose Overflow was danced second, reported that he had several ideas, but wasn’t sure how they were all going to come together. In the studio, Mark, who is a very knowledgeable and accomplished musician, spoke to the dancers about the difference between Apollonian (Agon, Cunningham) and Dionysian (Wagner, orgasmic—and organic, flowing) approaches to art, and to life. His choice of music (Richard Wagner, ‘Prelude and Liebestod’ from Tristan and Isolde) came out of his sense of these dancers, the way they moved and interacted with each other. Generated by improvisational problems he set the dancers, “All the movement came from them, the phrases they made.”

For Texas-based Dominic Walsh, whose piece, The Ghost Behind Me, finished out the program, the music also came first, but the process was different. His piece was choreographed to an original and pre-composed (but un-written-down) score by Two Star Symphony, the band of musicians playing onstage during all four performances. (For more on Two Star, see last week’s Whim W’Him Behind the Scenes post.) Before they began work, Dominic said, “I had talked with the musicians,” with whom this is his fifth collaboration since 2004. The music grew out of “what is cathartic in our lives now.”
As for the choreographic process, “I came with one movement phrase, 1/8 duet and 1/8 solo. [Ghost] grew out of the dancers understanding my movement vocabulary. These are very generous dancers, who bring the narrative out.” 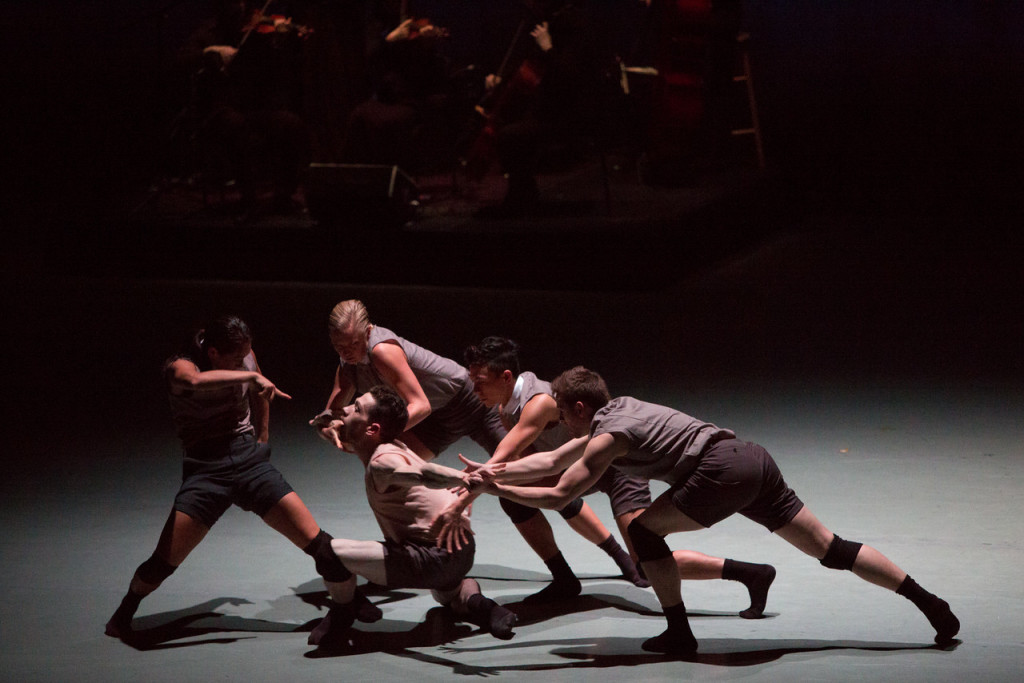 Several spectators wondered about socks. “How can you do all that twirling and leaping in socks?” Thomas replied, with his usual humor, “It depends on having the right percentage of cotton in them.” Dominic talked about how they made Patrick press more into the floor, “part of the skill set, that pressure against the floor.” For the dancers, “it’s a constant battle between sliding and staying upright.” And Olivier matter-of-factly summarized, “It’s a different footwear, like ballet slippers or pointe shoes or bare feet, you learn to master it.” But even then, I heard more than one audience member mutter something to the effect of, “I still don’t see how they can dance in socks and not crash.” 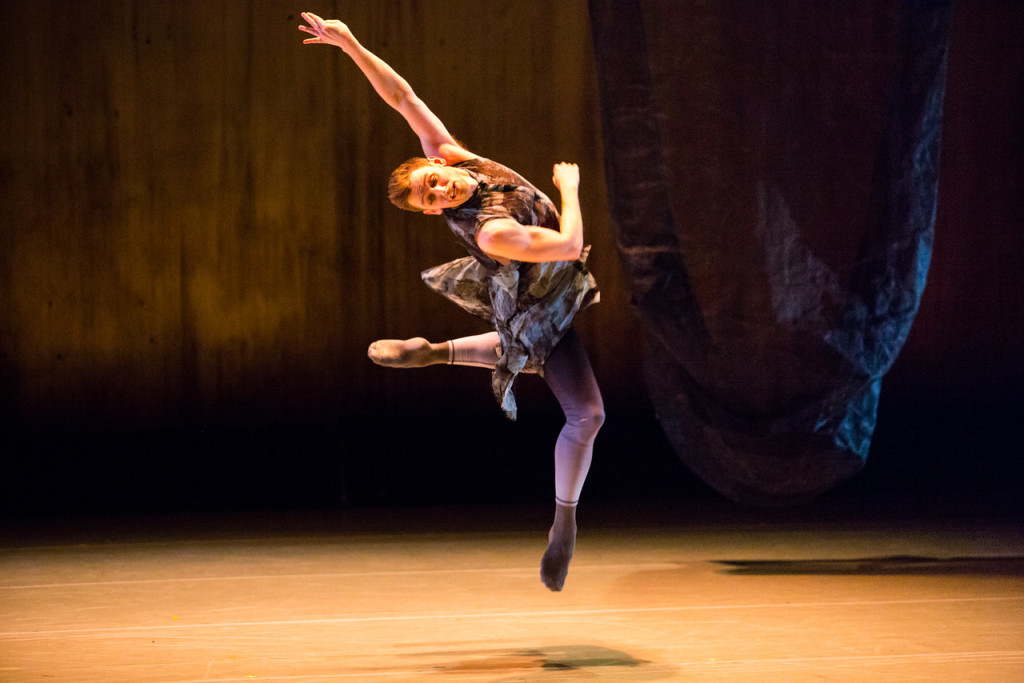 There were also questions about costuming and the part it plays in the whole.
Here again, a lot of variation. This time around, costumes were central to Olivier’s whole conception,  brought to life by Ronalee Wear.

On the other hand, what the dancers would wear was almost an afterthought for Mark, who said, with engaging frankness, “I’m good at sets and light, but for costumes I need help.” With Olivier’s prodding—“Mark, you have to think about costumes!”—and the assistance of Mark Zappone, of Pacific Northwest Ballet’s costume shop and frequent Whim W’Him costumer, they were put together. One day, near the end of the rehearsal period, Mark brought in an armful of long, flowy garments from H&M, and let the dancers choose. Then various things were done to shape the clothes, removing sleeves, changing hems, reinforcing them to withstand the dancers’ vigorous movement. 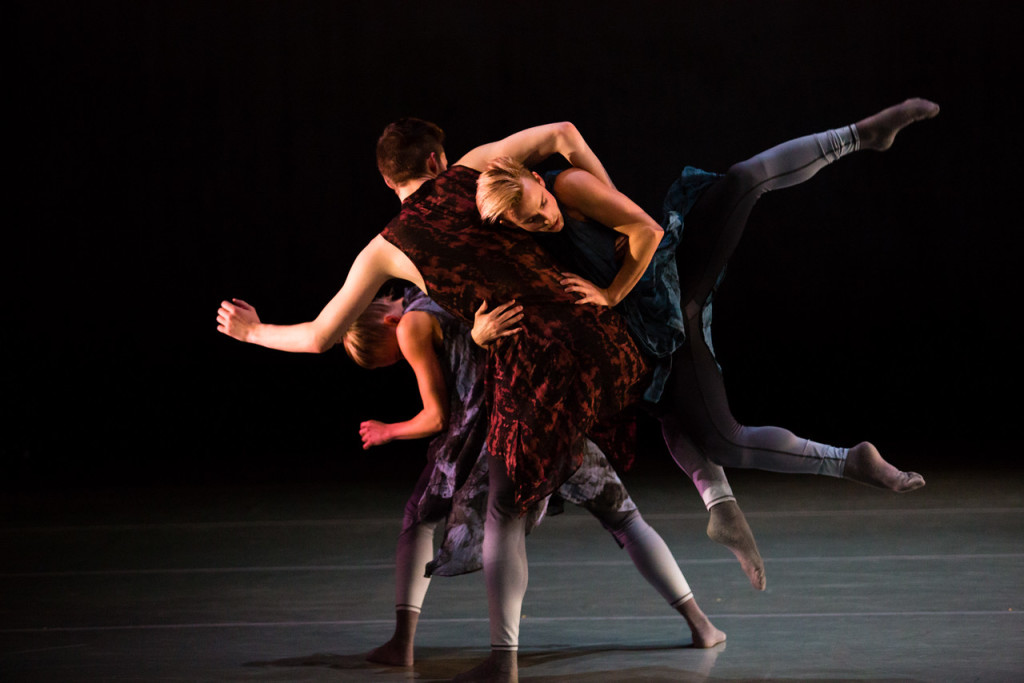 The shadowy, camouflage-like patterns and the addition of leggings in graduated shades of gray connected costumes to the colors in the long silky scroll that slowly lowered to the stage floor and silted up there. To one questioner, who asked, “That amazing drape, when did it enter program?” Mark answered, “I had several ideas. I thought of a moving projected landscape, or shoes hanging on strings. But there were technical problems and financial constraints…” 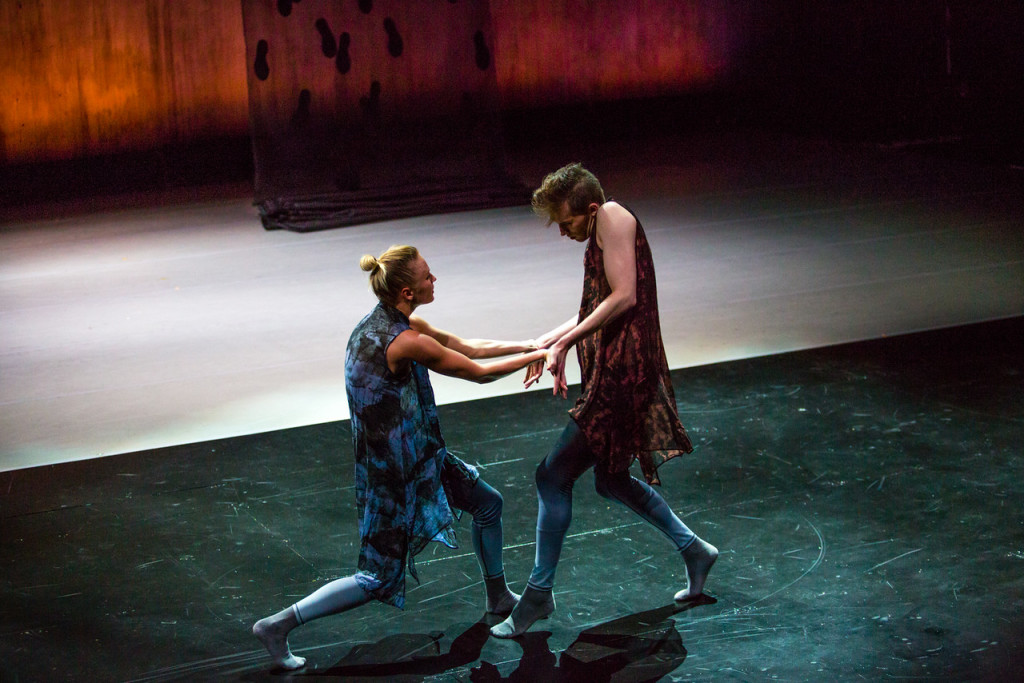 Luckily, Mark was able to bring in Corrie Befort, dancer and designer, who is exceptional at “doing a lot with a little in a short time” and who conceived and constructed the scroll in less than two weeks. In the end, “Gravity was our friend,” Mark added, that and thoughts of the refugee crisis in Europe—the footprints were added later. Evocative lighting by Michael Mazzola set the costumes and scroll off, accentuating the sense of on-going human lives, as well human overflow in the piece, which was dedicated To my mother, an immigrant, and my father, a refugee. 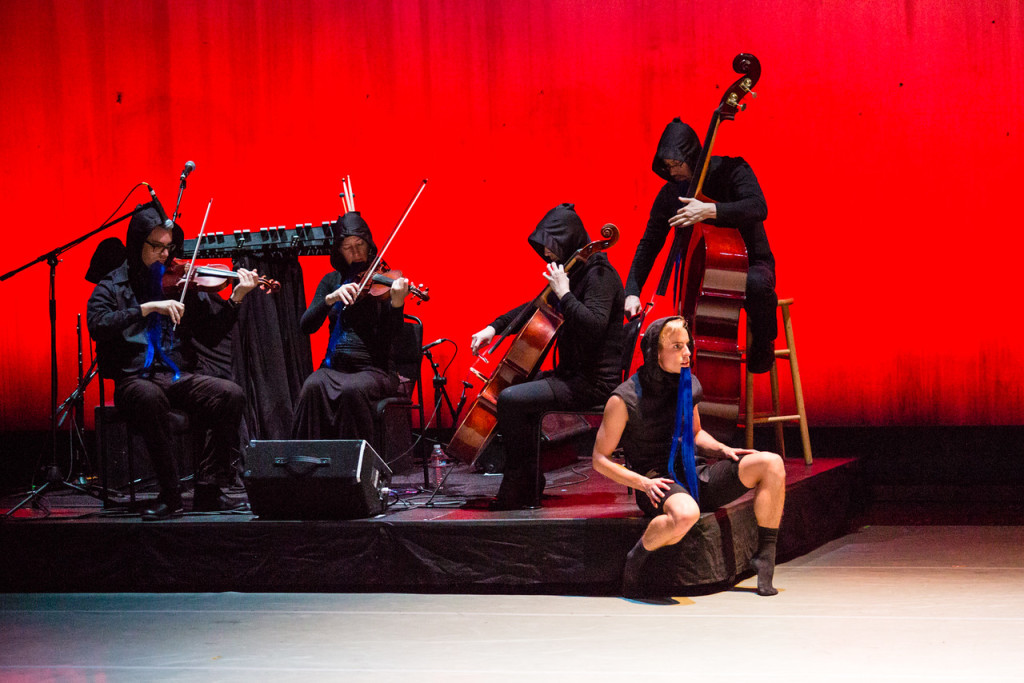 The day of the dress rehearsal, the hooded figures got strange (and rather controversial) long, royal-blue beards—which either, depending on the viewer, added to the mystery or obscured the absorbed and workmanlike expression on the Puppetmaster’s face as he went about his manipulative job. Turning one segment first to an open shirt then topless for Tory was also a late decision (more on that later). The significance of these touches was not divulged by Dominic, even at the end. “I’m very selective in what I say—until the last minute—about what to explore further. Not everything needs to be said at once,” or at all… And thus the challenge of elucidation falls squarely to the dancers themselves. 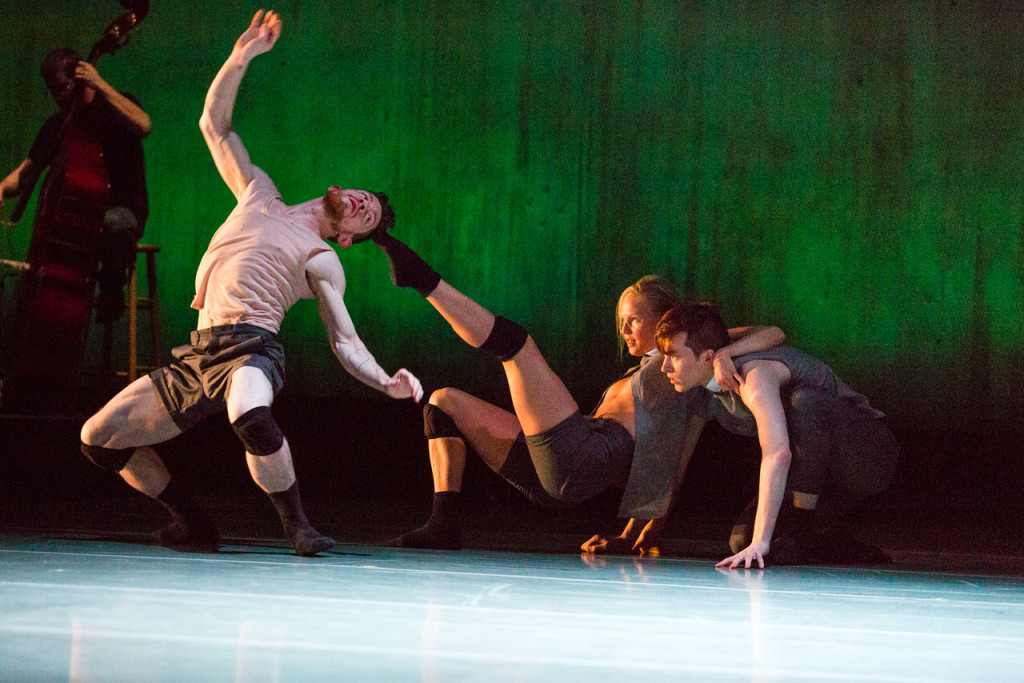 Which segues beautifully into to a whole raft of fascinating other questions and some lively discussion—of story, meaning and how dance communicates. But, given the length of this post already, that will all best be kept for next week.