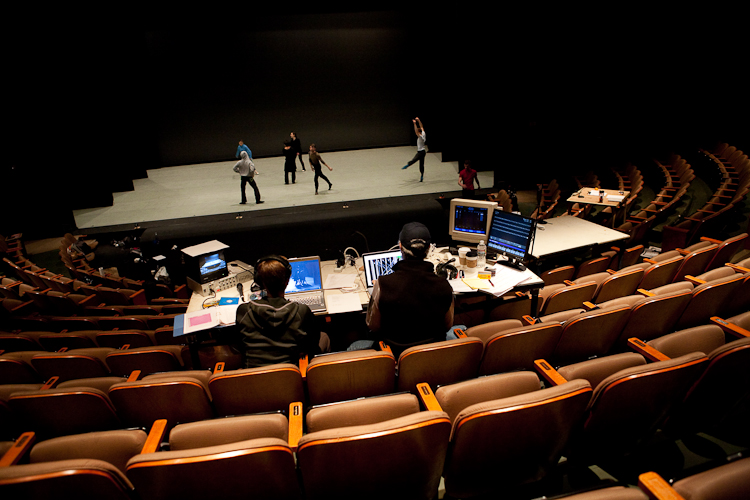 Honest, down-to-earth, sensible, dryly witty, Michael Mazzola again struck me, on meeting him after a year, as being full of the light he deals in. I talked to him after a day largely devoted to lighting in the week that ended with the January 2011 performances at Intiman Theatre of Shadows, Raincoats and Monsters.

As a preface to our talk, he said: ”Making art is a fraught enterprise. Scary. You feel vulnerable. It’s hard to find a space, interior and exterior, and a coterie to be part of. For whatever reasons, that is a space that Olivier creates: open, warm, safe, exciting, and dancing.” I think he’s right. Collaboration/co-operation in action, not just theory, is, in my mind, a central ingredient of why Whim W’Him works as an artistic enterprise. Sometimes of course, it is hard, but Olivier, in Michael’s opinion, “has crafted a situation with Intiman that allows time and space to engage in the necessary interaction.”

The work sequence for this show was interesting, and perhaps a little unusual. Last year, Olivier went to Portland to discuss what was needed with Michael. They had one meeting, Olivier talked about his two pieces, and Michael responded with some things they brought up in terms of lighting. “That conversation last spring,” said Michael, “was loose, but very inspiring. A beautiful thing—an open field where things can grow.”

Some months later on, Michael got the DVDs of Olivier’s pieces and came up with a loose plan, a loose set of core images. One of his jobs, as he sees it, is to help the choreographer feel he/she “is in the place they need to be. Safe, collaborative, engaged, open. Not no-ing.” 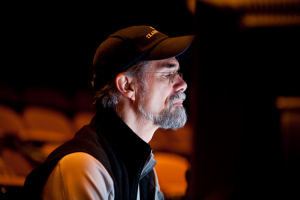 The week of rehearsals was, he said, “Very enjoyable, being able to show Olivier—‘Here’s one of my core visual ideas of Monster’—and to have him respond choreographically.” Does the lighting work with the choreography to get across its creator’s intentions? Should either light or movement be modified in the interests of a subtle and coherent whole?

Michael said he would have to go back and look at his notes to remember what  exactly prompted him to suggest florescent lighting and the three tall lights at each side of the stage. “Just the idea,” he added. The stark florescent poles seem to me to express a kind of rawness, states of mind that entertain monsters. To Michael, they signify “an attitude—to open out the internal feeling that the world creates in people who’ve been oppressed and compressed like that.”

Working on This is Not a Raincoat was noteworthy in another way. January’s Intiman Theatre performances would not be the premiere (which took place at Northwest Dance Project’s September 2010 show in Portland, OR). Michael liked how, when they discussed it, Olivier said, “This is what we did, this is what I liked about it, this is what needs changing…”

One thing that was kept was the bars of light that largely confine the five dancers at one point. Primarily, Michael looked at the rehearsal DVD rather than a performance one with lighting. In his first view of Raincoat, he knew how he wanted to direct the eye to the choreographic energy—with a big box of darkness in the center at the start; later, he added the ‘venetion blind section.’ It still needed, he said on the day we talked, “some observation, some touching and rubbing”—and small but significant adjustments kept being made right up through the dress rehearsal… 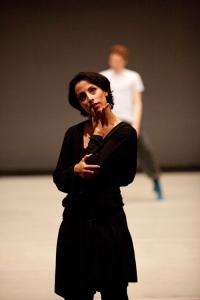 For Annabelle Lopez Ochoa’s Cylindrical Shadows, the process was different still. Michael and Annabelle first met long-distance— Olivier introduced them via email last summer. Then there was a very brief email flurry in early fall. Annabelle wrote Michael of the untimely death of a friend, which was the emotional core of her piece. And an interest in shadows.

Instead of a written response, he did research on Google to come up with a range of shadow images that might interest her. She responded very positively to a couple: One (in the end not used) was of an ornate wrought iron gate with shallow, angled light and huge shadow. The other was low contrast, abstract images of bare trees in mist. Both included shadows, already there, that bodies pass through.

Later he sent her some 3D renderings—not necessarily literal—of how he might translate the ideas on stage. In a lot of ways, the notion of shadow was reworked heavily over the course of the piece’s inception. Some aspects worked; others, for example, strong patterns of light and shadow on the floor as well as in the background, didn’t seem quite right to Annabelle. In the original discussion, light would create shadows—light/dark. But with the evolution of the piece, she didn’t want much shadow across the stage floor, except that made by the dancers themselves. A tree shadow idea quietly receded, and another notion, of the shadow of bodies, came to predominate.

One big idea—not really explored overtly by either Michael or Annabelle—is the notion of landscape. The opening sections of Cylindrical Shadows seem to transpire on a vast plain with sky behind changing color, while in the later segments, misty trees form the background.

Working at Intiman, the company had the great advantage of a whole week in the theater prior to the performances. It was wonderful, said Michael, “to have a couple of days to noodle, sketch, get feedback, without it mattering—a kind of playing in a light sandbox.” And after that it was hard work in real time, “with stop/start/finagle.” A word which arose often during that week of in-theater rehearsal was “serene.” There had been no serenity in the fall, when the lighting was first discussed. By now, however, the storm unleashed by early death had worked itself out in Shadows, leaving in its wake a new kind of existence, calmer, but (in Michael’s words) “with a sense of undulation, of change, of nothing static.”

In the event, the hard-won quietude of this final piece made a fitting progression across the course of the evening, from Raincoat’s youthful, experimental jauntiness, through gritty “real-life” torment in the three Monster duets, to the flickering resolution of Shadows.

And, as Michael Upchurch noted in his Seattle Times review of January 15, 2011, “Michael Mazzola’s brilliant lighting design was a key ingredient of the night.”