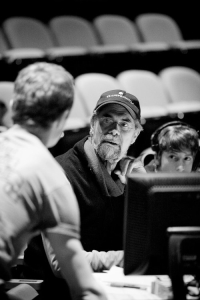 Michael Mazzola lit all three premieres, by Olivier Wevers, of the Casting the First Rock in Twenty-Twelve program, as he has each Whim W’Him production to date.

The lighting conception for the witty and playful Flower Festival is both deceptively simple and highly effective. Two men in business suits meet, shake hands, then drag their chairs to the northeast and southwest corners of a stark white rectangle. The theme of a pugilistic contest is thus slyly established at once…
…though its full import only becomes clear as Lucien Postlewaite and Andrew Bartee square off against each other and a complex ritual of male sparring turns literal.
They shed their clothing (designed by Mark Zappone)—shoes, black socks, natty but relatively sober suits  with colorful tropical ties and linings—stripping down to boxer shorts. The arena is there. Its corners are claimed, and the two protagonists duke it out right to the finish as the lights go down on their continuing struggle. 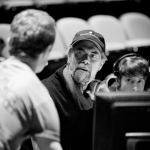 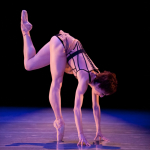 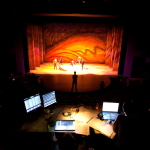 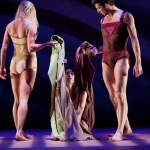 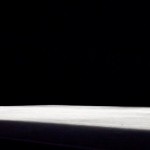 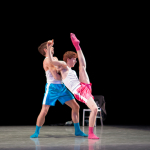 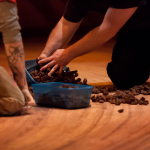 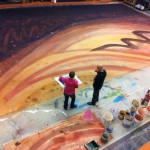 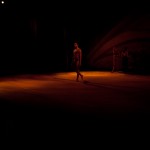 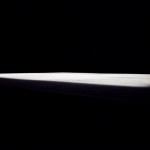 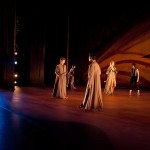 In La Langue de l’amour, Chalnessa Eames—quick, agile, flirtatious, a bit manic—flits in and out of three narrow, receding triangles of light that flicker on and off in seemingly random patterns, like heat lightning on a summer afternoon, against a background of agitated Scarlatti.

Lighting for thrOwn, like the piece itself, is more layered and complex. The avowed mission of Whim W’Him is artistic collaboration, and never has the company staged a work that more fully embodied that aim. For me, the extended act of observing close up the joint effort that produced thrOwn —from its genesis as an idea many months ago to the still on-going discussion of its many meanings and intentions—has been nothing short of illuminating.

Creation of Steve Jensen‘s scenic design (brought to fruition with the help of Ruth Gilmore) was literally multi-layered, involving many coats, speckles, swathes, streaks and smudges of paint. Five basic colors were used, but because of the richness of the set’s surface texture, the lighting design could produce an almost limitless palette of effects.

Costumes were designed by Christine Joly de Lotbiniere, in close conversation with Olivier and the dancers. At least four separate incarnations were required to perfect a dancers’ overgarment to serve as coat, skirt, whip and receptacle for stones. In performance, ever-changing light glanced off the swirling overgarments and picked up the groupings of dancers-as-mob. The earth-toned set and the dancers’ own coloring were  brought out in the hues of their undergarments (also of Christine’s design), which the lighting in turn augmented and emended, glinting on their limbs or faces and charging key moments with mysterious power.

After seeing many rehearsals and all performances, reading reviews and comments, discussing the piece with others, and thinking about it at length, I have realized how much not just the making of thrOwn but it’s meaning is an interweaving of collective efforts. At first, to be frank, I lamented the absence of the strongly emotive style of dancing that seemed called for by the terrible story told in the two outer sections.
It has only been been after paying close attention to the subtly lighted images still running through my mind after it is well over, that I have recognized how an affecting personal story is only one part of this piece. The slightly chilling sense I felt at witnessing such a horrific tale—told with arresting choreographic images, stunning light and some haunting music, but without any easy emotional catharsis—is, I have concluded, precisely what Olivier was after.

By filling our senses with sound and the physical shapes of movement, by concentrating as well on how thrOwn is clothed and set and lit, while deliberately holding the dancers back from too overt expressions of feeling, Olivier chose not to court direct empathy.
His point is that if we identify too closely with the victim in this piece, we let ourselves transform the perpetrators of wrongs into The Other, something alien that we can disown. In thrOwn we aren’t offered that out. Human nature encompasses great beauty, appalling ugliness, breathtaking kindness and ghastly cruelty. They are all part of what makes the world what it is. Like the dancers in this piece, we its viewers become victim and executioner, lover, parent, child, and destroyer. Rather than taking comfort in easy artistic release, we are pushed to acknowledge our complicity. Of course as individuals, we are doubtless less brutal, more caring in our own lives. But as members of the human race we carry such possibilities, bad and good alike, within ourselves.

In creating thrOwn, Olivier and his fellow artists drew on choreography, sound, setting, costume and light, without any one element or emotional identification dominating the others, to produce a true collaboration that is beautiful, disturbing, and not easily forgotten.