from looking in to looking out…

Olivier Wevers is retiring this spring as principal dancer with Pacific Northwest Ballet to become Whim W’Him’s full time artistic director, principal choreographer, ex officio board member, fund raiser, and all the other myriad jobs taken on by an arts organization head.

Having seen him in Pacific and Concerto DSCH, as well as demonstrating steps at a Whim W’Him rehearsal last week, I do have to say that I’m sorry to see the dancing Olivier Wevers retire.

But it is also exciting to watch him grow and blossom in his new, and likely most challenging role(s) yet. Friday night I asked him about his metamorphosis, the process of turning from dancer to choreographer.

How did it happen? What drew him from the limelight position of dancer on stage to the role of choreographer, the backstage generator of ideas?

His whole life, Olivier has been interested in searching for and exploring creativity. Even when he was very young, he says, he was continually creating something. He’s had many role models he greatly admired, people he has learned from, but he never aspired “to be like somebody else, to copy anyone.” He wanted “to be creative all on my own.”

As a dancer he confesses, “I have lots of limitations. I hate my legs and feet.” He allows as how his technique has never been his strongest point, never an easy or natural achievement. He has struggled with it. 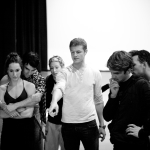 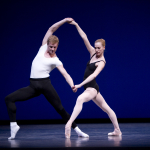 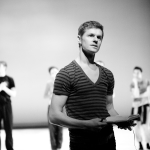 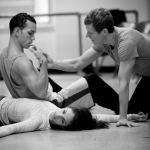 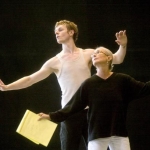 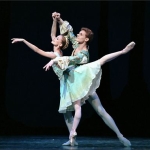 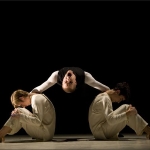 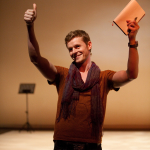 At the same time, he has always loved the acting, which is his natural element. He has had to be creative about how to use the elements of acting “to fake out technique.” It is “problem-solving—in a variation, how to get from A to B without falling! How to make it happen.

“And that’s what we do as choreographers too.” One can see, watching him choreograph, that intense interest in and knowledge of precise mechanics—how to make a particular lift or turn or jump or intricate mingling of bodies work, not as a fancy trick, but to convey an idea, transmit a feeling, make the shape he has in mind.

“I’ve spent 22 years learning, about my body, about my partner’s body,” he says, all the complexities of how moving bodies work.

“And I love that the next 22 years will be learning too.”

The transition is from concentration on the self as the creative instrument or medium to “what I can see out there.” Olivier will, he imagines, “probably be happy with leaving myself alone, more satisfied and accepting.” He finds he is less critical of others than of himself. Watching him, I would amend that slightly to say that he is less harsh on others, but, in a kind and often humorous fashion, he continues to be meticulous and exacting.

So why is he choosing to make this momentous change at just this point? Turning 40 in June is surely not in itself sufficient cause.

“I feel blessed, I have had an amazing career. Truly. Dancing with extraordinary dancers. Working with wonderful choreographers. I’ve barely been injured.” He knocks on wood. “I’ve toured all over the world and done what I couldn’t have dreamed.” He’s lucky he says to be retiring at a high point as a dancer, when his body is still in good condition and can do what is demanded of it. He could keep dancing, “But why?”

“On one level,” Olivier replies, “of course yes—being on stage, that particular kind of challenge, putting on a costume and makeup, the rehearsal routine, friends, the satisfaction of doing a good job in a show.”

But what he is hungry for at this point in his career isn’t further accomplishment as a dancer. His desires and challenges need to be met in other ways. The drive or aspiration he now feels is to make dances for others. He isn’t planning on guesting with other companies. This spring he will finish with that phase of his life. His emphasis is far less on what he’s leaving behind than on what he’s moving toward. “This is a perfect time to go—to take up choreographing, marketing, funding and all the other, different challenges of forming a new company.”

“It’s also,” he adds with a wry smile, “frickin’ scary! Being a dancer is what’s defined me.

“As dancers, we are selfish. ‘Do I look good? Am I holding my partner right?’ We are looking at ourselves. As a dancer, I learned about my nerves, my body, my partner’s body, my brain, what kind of a person I am, how I could push myself.”

Now Olivier is turning his ambitions toward what he can do with others. Looking out rather than looking in. “I am accepting myself more as a choreographer than as a dancer, discovering more of myself,” he says.

But of course it puts lots of pressure on him, being so many things to so many people. And he’s hard on himself. That’s nothing new, though the kind of pressure is.

“It’s not like a painter, alone with a whole array of colors. The choreographer is working with other people, making them into the best possible artists they can be.” As director of a company, “I have colors that never dry out in the hot sun, they’re always moving. How can I make them work together?”

Olivier respects his dancers and other creative collaborators enormously. “I want to bring challenges to them, to help them be inspired and grow as artists and humans. And I learn so much from them!” His eyes shine. His body seems bursting with excited anticipation. The whole process, he says, “is fascinating and gratifying.”