Flower Festival, a highly original take on Bournonville’s classic Flower Festival in Genzano, is a duet of two very different characters, a playful study in contrasted personalities. In his much acclaimed Monster – Society, choreographer Olivier Wevers (founder and Artistic Director of Whim W’Him) examined the effects of societal ostracism on a relationship between two men. The focus of this new offering is far less on the dancers’ gender per se and more on the dynamics of their relationship. Despite its light-heartedness, the piece strikes me as oddly touching and psychologically true.

Andrew Bartee has a lot of light, fast, sometimes mildly flirtatious steps, quite in the spirit of the original Danish ballet. But this is far from a simple setting of girlish movements on a young man’s body—and nothing like the outrageous parody of Les Ballets Trocadero. Andrew’s loose-limbed persona is pulled about here and there by forces within or outside himself, like a sort of Fred Astaire marionette. But he remains insouciant, deadpan, a bit inscrutable.

Meanwhile, Lucien Postlewaite exudes heavy-macho gruffness. His character— whose personality is all on the surface as he launches into a lot of aggressive, growlly movements—takes himself very seriously. The intricacy of the two dancers’ involvement with their jackets and other bits of clothing, their earnest rivalry, the altogether in-character way they inhabit their roles is funny, but is not done for easy cross-gender laughs. Caught up in his own story, each responds with revealing individuality and emotional integrity to a rather ridiculous situation. Both choreography and dancing are consistently interesting, demanding and apt. 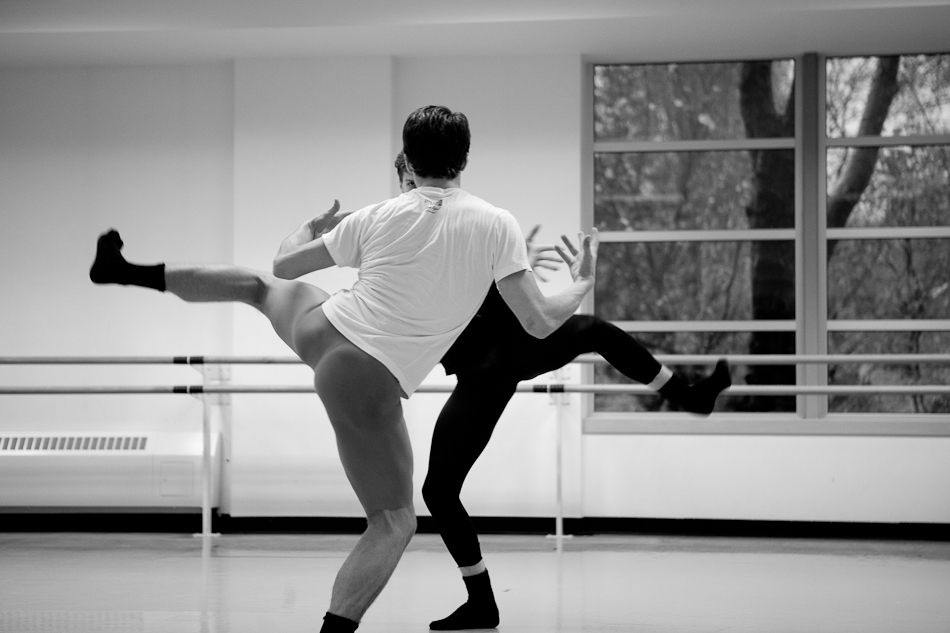 Part of what intrigues here is watching a strong professional partnering relationship building up between Lucien and Andrew, the sort of thing you often get to see in the more traditional male-female pas de deux, but virtually never with two dancers of the same gender.

Flower Festival is part of the Whim W’Him program Cast the First Rock in Twenty Twelve on January 20-22, 2012 at Intiman Theatre.