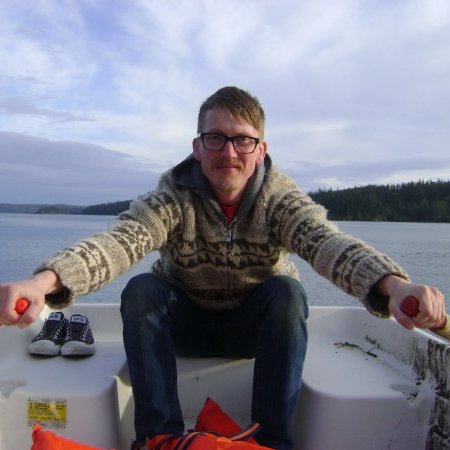 The studio of Shawn Parks has a wonderful wall made of spools of yarn—beautiful colors, the different sizes and shapes of the spools, the yarn textures. Putting the wall up was itself, as he remarks, “an art project in itself.” 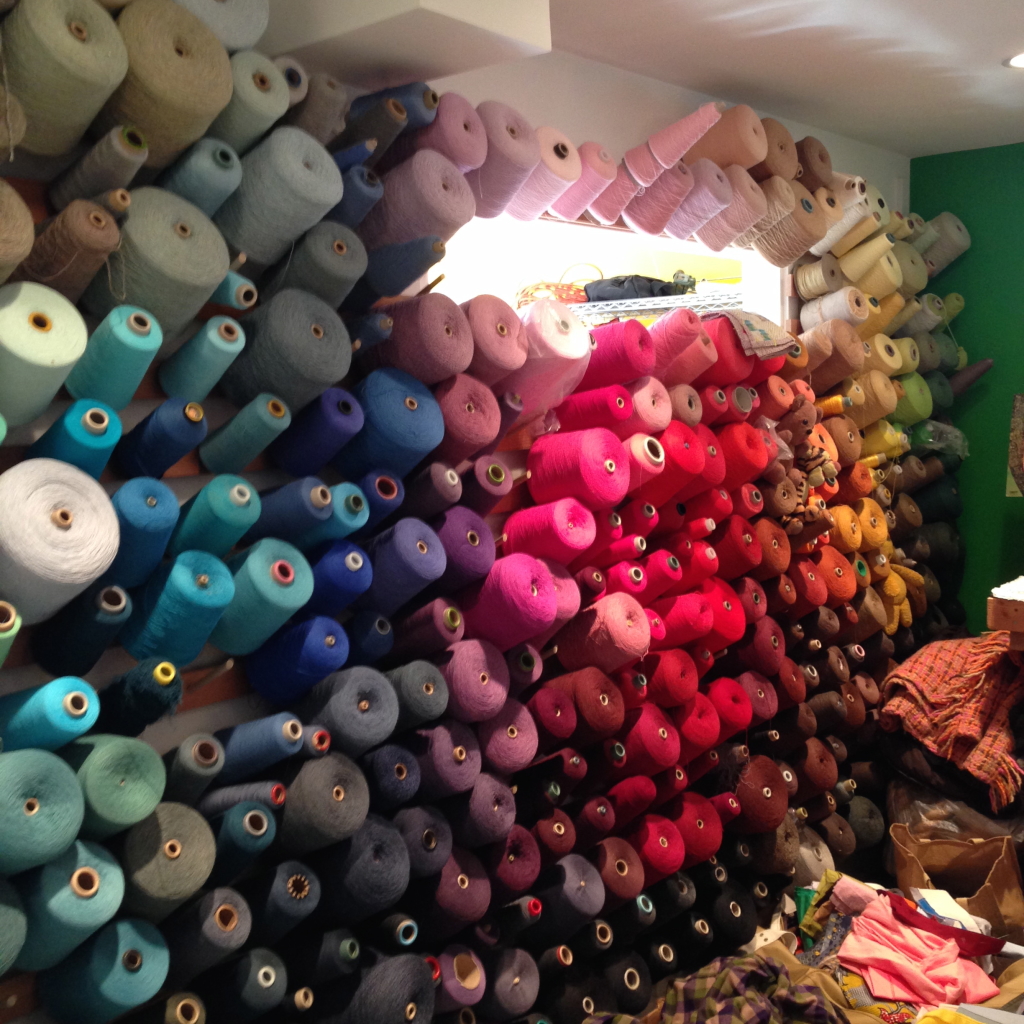 The piece he is contributing to the November 6 Whim W’Him | Out On A Whim 2014 auction & fundraiser is one of a series of blocks he has fabricated out of yarn affixed to chunks of found wood. 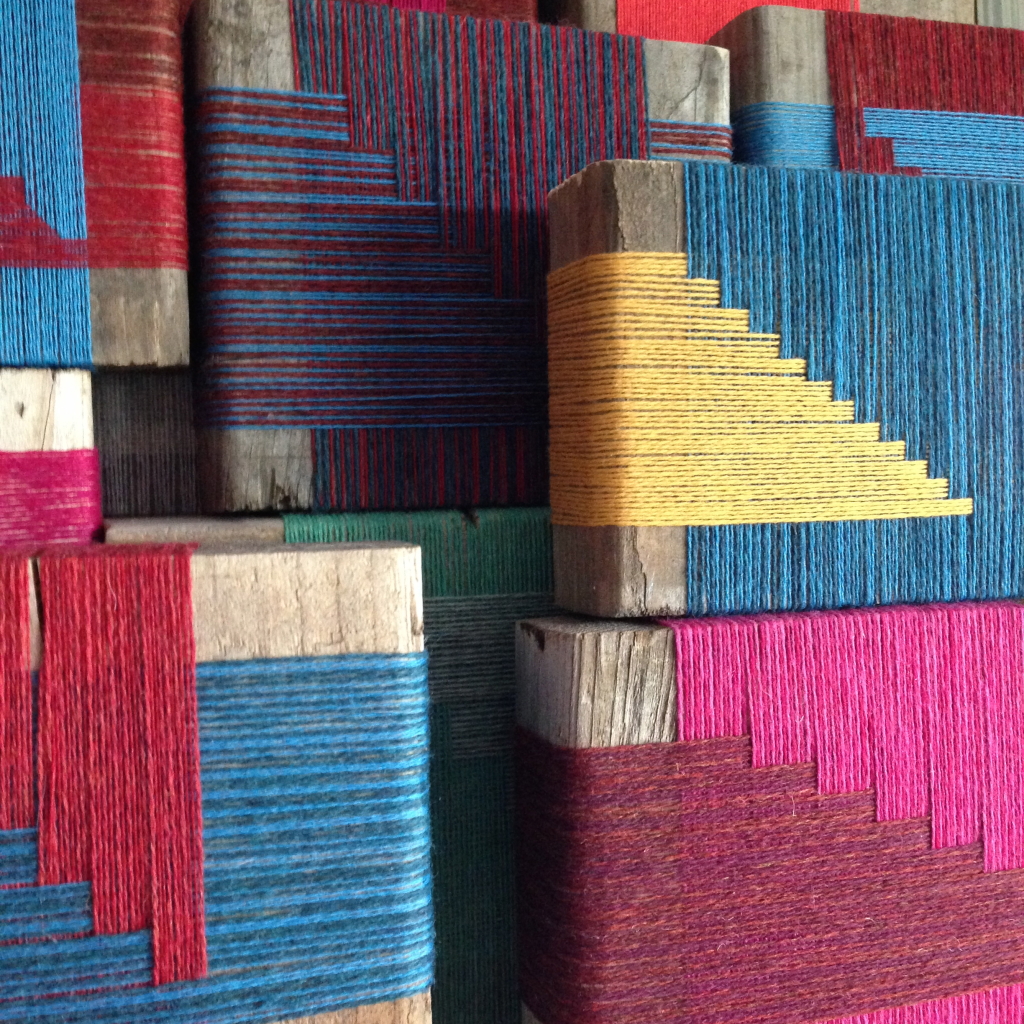 Despite the fact that Shawn says, “I’m aways a way from calling myself an artist—it takes many hours of dedication, and I’m not in that range yet,” all these pieces show meticulous workmanship, sophisticated sense of design, and love of color.

In fact he has put in many hours in different ways. His educational background was the Rhode Island School of Design. “I went for furniture,” Shawn says, until a long-time interest in 3-D design and building led him toward architecture. “But it was too abstract. ‘This toothpick represents a pillar.'” He laughs. “I wanted more hands on, something I could touch.” Since he was little, he had collected fabric. So, although “I thought weaving was for hippies,” he switched to textiles in design school “and fell in love.” His new direction nicely married 3-D design and working with cloth. 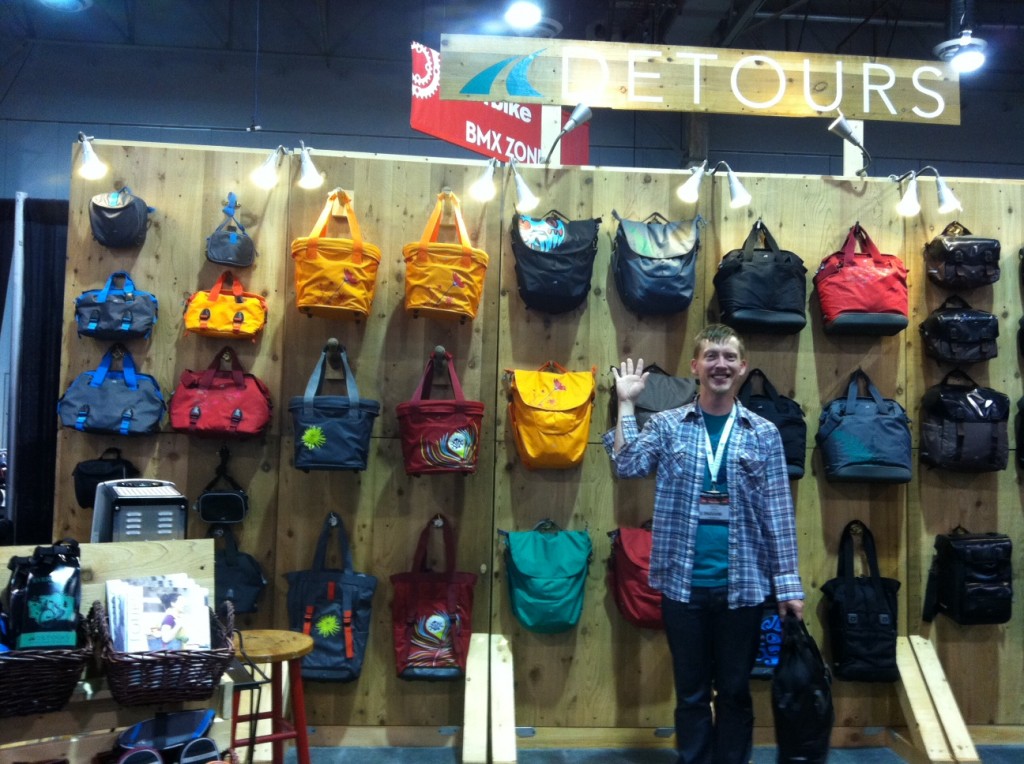 After RISD, Shawn did bag design for several years, in Denver, the San Francisco Bay Area, and Seattle as creative director of Blackstone Investment Group, which owns Carry Gear, Detours, and Haiku Bags. 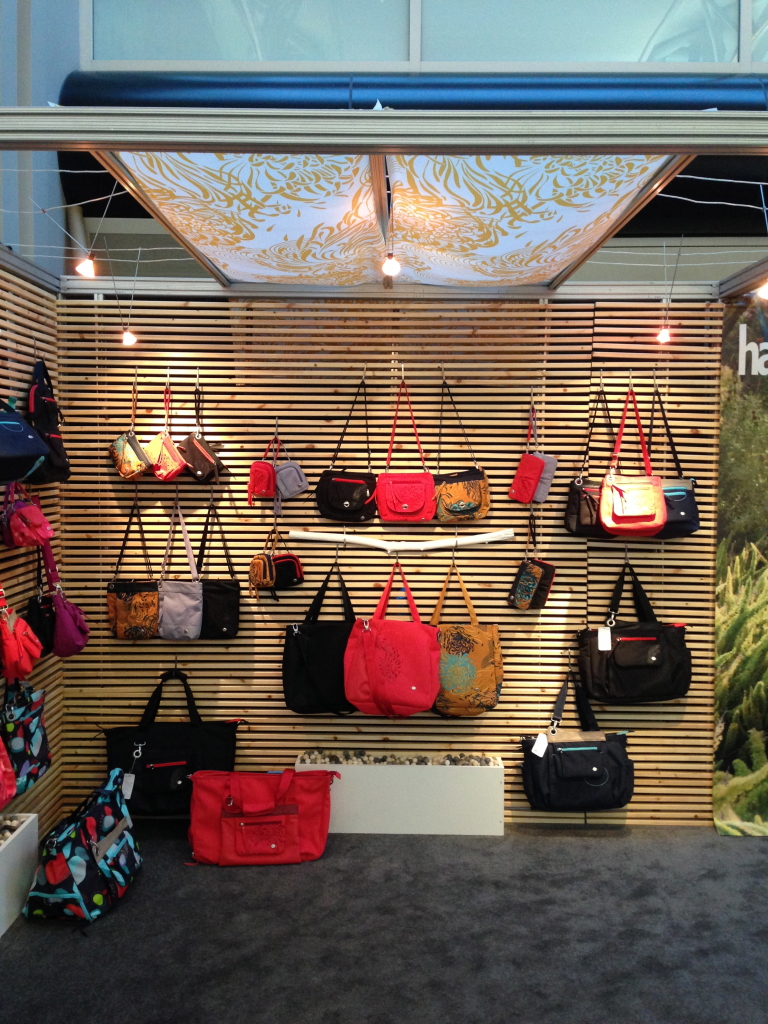 Recently he has gone out on his own, working on contract “for several random projects” and is also starting a company with a more artistic focus, in “fiber, ceramic, queer, and fine arts.” He wants to bring “a higher lever of arts to retail venues, bringing work out of the galleries and into existing real venues.” The name of the project is QMNIQBL (pronounced Communicable).

Shawn’s first such venture is about to take place in a Pioneer Square shop called Velouria Boutique & Gallery. “An amazing Portland weaver” named Kayla Mattes will be on site for 5 days interacting with the public and teaching weaving workshops. On Nov. 12, 5:30 – 8pm at Velouria, 145 S. King St., you can meet Kayla, see her weavings, including what she is creating live on a large custom made loom in the shop window where she will weave daily from 10-4, Nov.11-15. (10% off all purchases at Velouria during the event).

In December at the same place, giant white weavings, by two artists who work in very different styles, will be on display. The name of that show is #whatswrongwithwhite. Shawn also has other artists he’s working with to find the right venues for them. 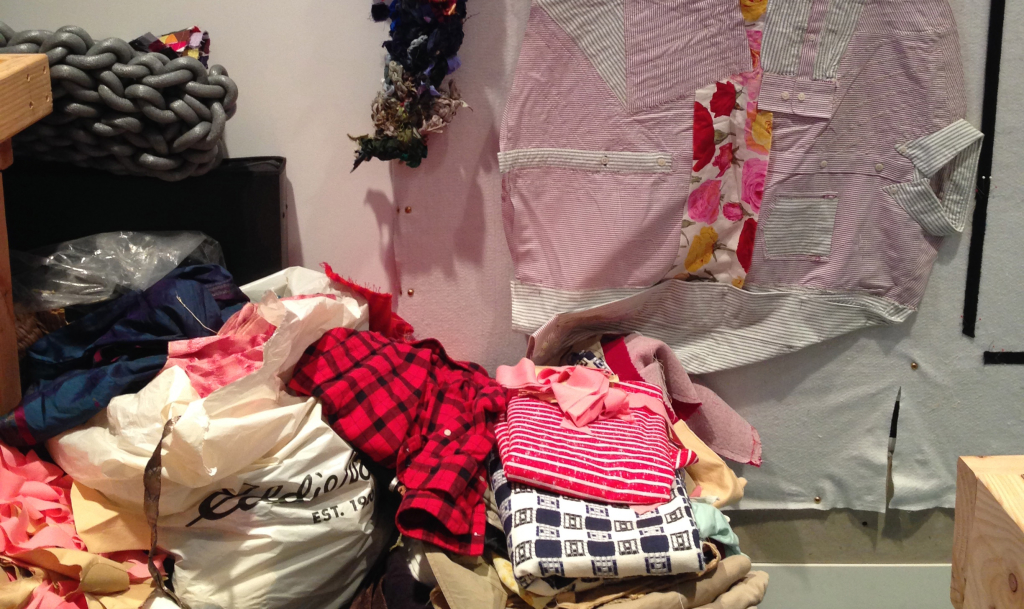 Shawn himself has gone back to working directly with fabric as well. He doesn’t care for knitting, for some reason, but in addition to creating the blocks with colored yarn, and “wrapping,” he has been quilting. Some of his latest efforts involve pieces of men’s shirts; others are fashioned from slivers and slices of brightly colored material cut free-hand. 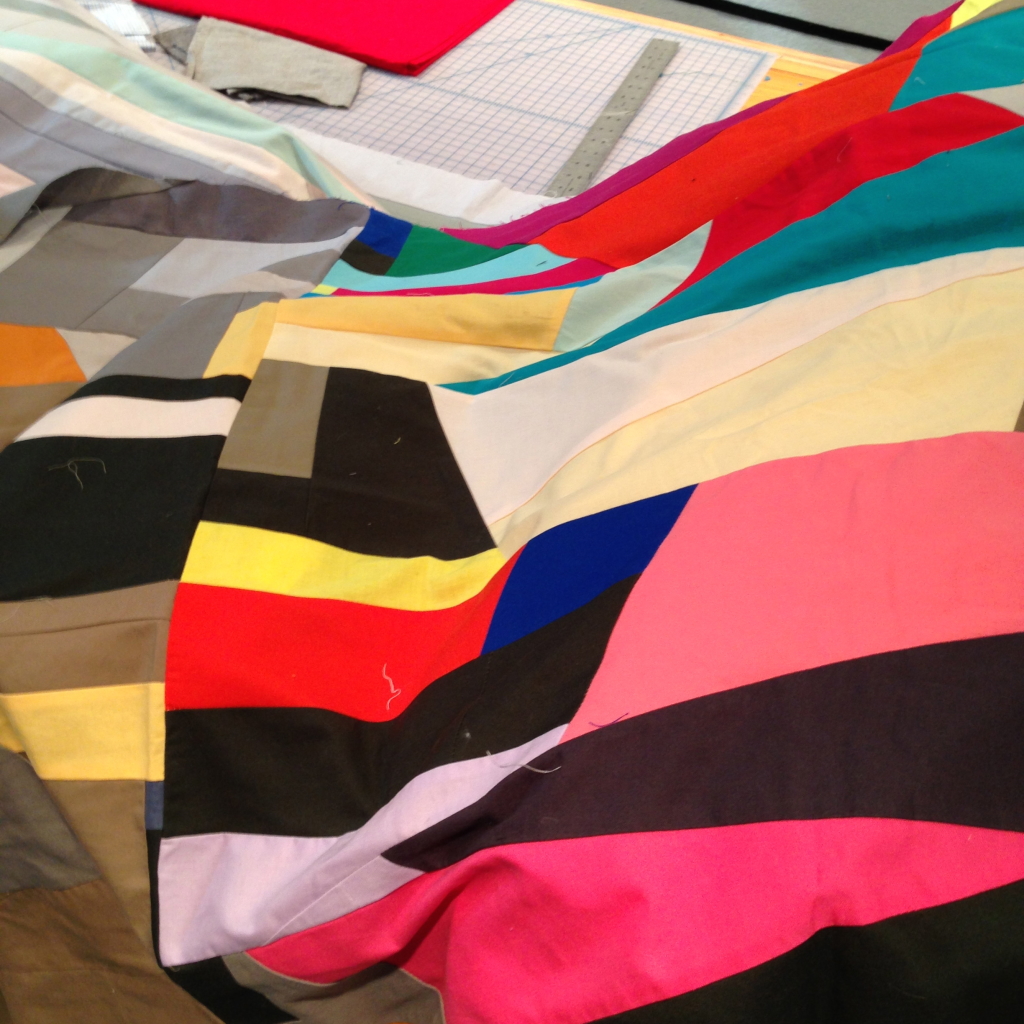 When not creating with fabric or promoting other artists, Shawn is an avid runner. He is an aficionado of dance as well. His mother was a ballerina and still has a school in Denver at the age of almost 80. “I grew up in ballet,” he remarks, “I came out of the womb in a tutu. My mom says I did a mean Swan Lake as a little kid, around 4.” But his career as a dancer ended unusually early, about the time when most children are just beginning. “I danced until I was 9, then realized I was gay—and renounced everything that had to do with it.”  At 11 he had a mohawk and started smoking. “And then at 14, I stumbled out of the closet.” He still (or once again) loves dance, yoga, running—”any kind of unencumbered movement.” 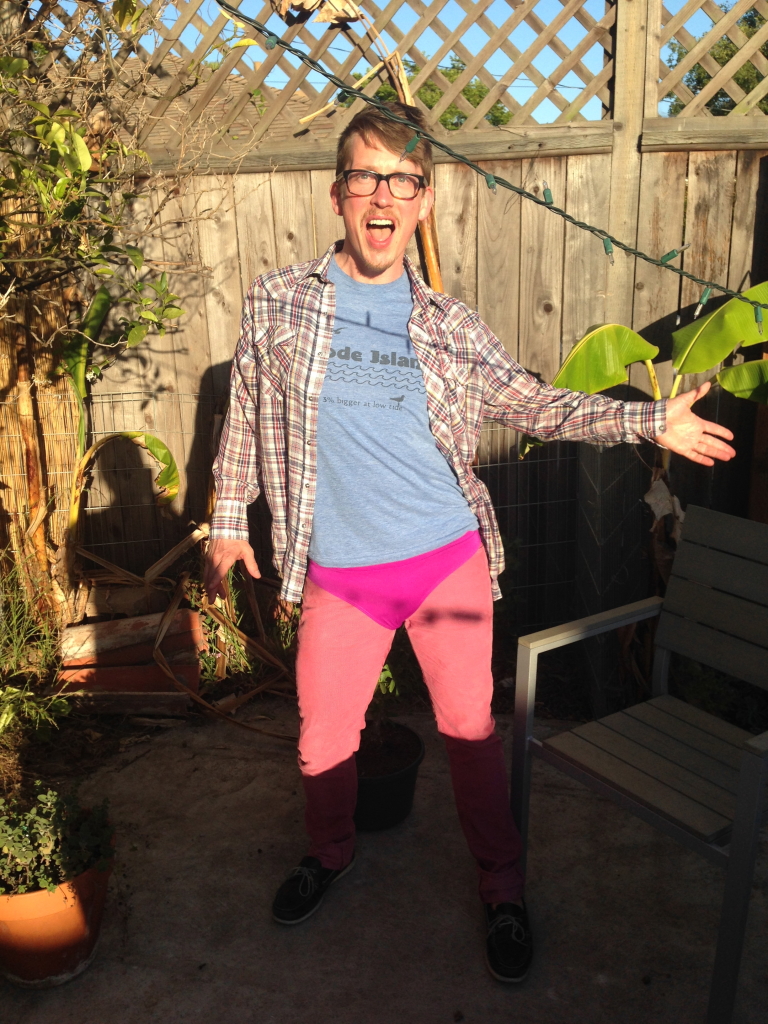