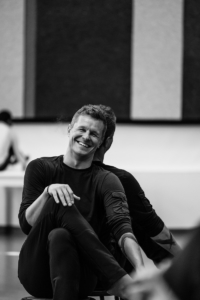 It was a long and winding journey from the planet (or asteroid, or well in the desert) out of which ideas spring, to the Cornish Playhouse stage where This Is Not The Little Prince premiered last weekend. In late winter 2017 Olivier Wevers, Whim W’Him’s artistic director, first broached the idea of a piece based on Antoine Saint-Exupéry’s much loved story and asked if I’d collaborate in working out an approach and a synopsis. I was a little wary—it’s been done an awful lot, The Little Prince—but readily agreed, intrigued by  Olivier’s strenuous insistence that this would not be an ‘adaption,’ a re-enaction in dance, but would delve into the story for more.

To begin with we met weekly, thinking up and working out ideas, the more outré the better. Generally, Olivier’s fertile mind had brainstorms, while I acted as midwife or sounding board. 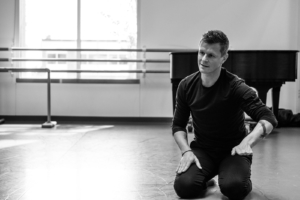 In an email on Feb 27, 2017, he texted from New York where Whim W’Him was holding auditions, I am at the met right now and got inspired by some Seurat exhibit about the circus. What about setting our story around a traveling circus/freak show??? Seurat’s colors were wonderful, his images striking. The idea grew of the tale unfolding out in the open in a nameless and desolate spot between towns, where the circus is resting and the pilot, having been wrecked in the desert, stumbles upon it.

But the circus setting eventually fizzled—it was distracting and brought in other characters and ideas peripheral to Saint-Exupéry’s story. And the paintings of Belgian surrealist René Magritte, who has fascinated Olivier for decades, became the visual inspiration.

Other notions were tossed around. Early on, Olivier had the idea that the narrator character “might be not a pilot, but a wanderer. Lost and wandering.” The plane then morphed into a motorcycle, a real one, that would be shrouded at the start on the apron that juts out into the auditorium. Later in the show it would the vehicle on which Prince and Pilot (now Vagabond) would roar off in search of whatever each was missing. The wanderer remained even when the motorcycle had gone the way of the circus.

We played with images of a hat, a snake, a drawn sketch of a box that materializes and from which the Prince takes a light bulb which is the missing piece for the broken motorcycle.

“What if the Pilot/Vagabond wears a Borsalino hat?” Olivier suggested.

“The whole thing could be more in his head. In a hospital maybe? How he sees himself maybe?”

“What if it takes place in a homeless encampment?” Although I fancied the idea of the gray and yellow columns under the freeway at Ravenna Blvd as a setting, the image seemed too far-fetched, too far from why this particular book was chosen for the subject of a new creation.

With so many matters under consideration, we moved on to spreadsheets with sections for Narrative, Characters, Themes, Emotions, Lighting, Costumes and Prop Needs in the originally envisaged 3 acts. 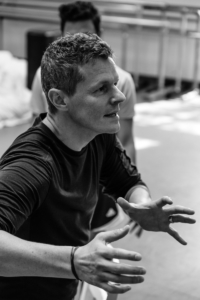 But always underlying the process to this point there was a tension, an uneasiness. It still felt too literal-minded, adaptation by other means. Something much more free-flowing/floating and allusive was hidden under all these trappings, waiting to be let out.

It was at this interesting juncture, to my sorrow and frustration, that for non-Whim-related reasons I had to bow out of the day-to-day picture for a number of months this past fall, winter and spring. During that time, both before dance rehearsals started and after, Olivier worked intently with Brian Lawlor the composer on music, Mark Zappone on costumes and Michael Mazzola on sets and lighting design (then later with Nicholas Smith on the realization of the latter, as Michael was unable to be there for actual staging and the shows). Although Olivier had kept me posted in a general way, I only was able to attend the first dance rehearsal and watched part of a couple of others. That was all—not the usual bit-by-bit, blow-by-blow observation I’ve typically enjoyed, especially of Olivier’s full-length pieces like 3Seasons, Approaching Ecstasy or Thrown. 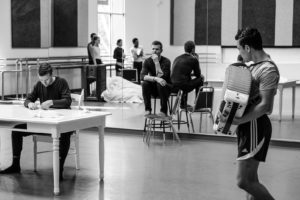 So my astonished reaction on seeing a complete run-through last week, at the point where the show was close to being fully realized, is hard to describe. It was if all our early talk, all the concepts, points-of-view, costume/lighting ideas, and synopses were mere simulacra, like a painting called This Is Not a Pipe—which, as Magritte himself said, you can’t put tobacco in and smoke. But what Olivier had created in the studio and with the other collaborators—when finally seen in action with my own eyes—was the Real Thing. Not the same thing as the story called The Little Prince, to be sure, but something deeply authentic in itself, undeniable, authoritative, emotion-provoking—and yet organically connected, via all the strange, twisty, underground rhizomes that give rise to and feed art, to the life and story of Saint-Exupéry. The dress rehearsal and first two performances have only compounded that uncanny impression. 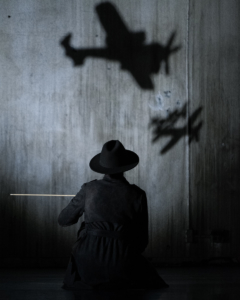 Olivier had cast loose, as long-intended, from a re-told story and made something truly other. In the end, all our particularistic re-imaginings of the book were ousted and a radical new approach adopted, as if Olivier had tossed all the spreadsheets of earlier ideas up in the air and let them to come crashing to earth. Quite a few notions didn’t live to help tell the tale. Some did, like the central conception of intertwined-but-divided identity of Prince and Pilot/Antoine, the notion of the latter as a troubled wanderer and various smaller details. Olivier had rescued the ideas that survived and, with the addition of new ones, tamed them to tell his own story. 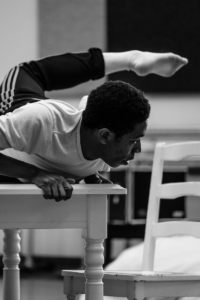 This was not taming with the usual connotation of domesticating or rendering harmless, however, but in St Ex’s more thoughtful and subtle sense: as a two-way process that requires the mutual assumption of trust and responsibility, where each recognizes and accepts the other’s nature and allows the other knowledge of one’s own. In TINTLP, the Prince (but danced by Antoine), tames and is tamed by a clearly wild fox (listen to the music!) in a more intricate, even dangerous-feeling encounter than one might simplistically imagine. This fox can really bite! The two eye each other suspiciously, feign indifference, arm wrestle, advance and retreat, but in the end move in unison. Their friendship takes shape before, not as in the book after the Prince is overcome by his encounter with a whole garden of rose look-alikes. So, it is already in place to soothe the Prince when he realizes the enormity of his having abandoned his Rose, the one singular being in his life, to set off on his airborne adventures. 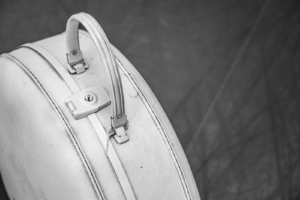 The idea of visual simplicity with layered meaning manifests in many ways in This Is Not The Little Prince. Props, all painted white, assume multiple meanings. Paper airplanes at different moments represent St Ex’s dreams of flight, memories of his actual flights, and the war which was tearing apart his native land. Suitcases suggest Magritte’s clouds or a volcano from the Prince’s planet, the idea of travel or a box with holes for an imaginary sheep. A table becomes a door, a window, a well, a mirror, and (with the help of a repurposed old-fashioned radio) the nose of an airplane or a car. 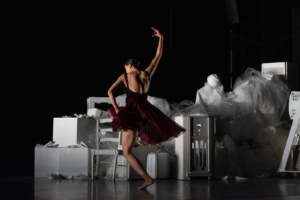 The dancers themselves at some points assume distinct roles—The Prince (Jim Kent), The Pilot/Antoine (Karl Watson), The Rose (Liane Aung), The Fox (Cameron Birts), The Snake (Adrian Hoffmann), Lamplighters (Jane Cracovaner & Mia Monteobaro). Yet all except the Prince and Antoine morph into other roles as well. 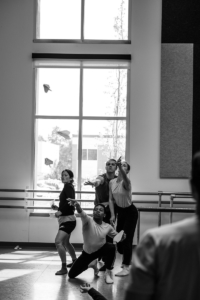 Costumes are all variations on the same fabrics and styles, but with subtle variation in color—at least that was the original idea, but it’s not really visible from the audience even when the lights came up for bows at the end. It is really their movement that distinguishes the characters. The snake is indicated by gangster/Gestapo silhouettes and a sequence in which the dancers together become a snake, one of them as its head. The Other Roses that are not the Prince’s own have red scarves wrapped around their heads, a veiled reference to a series of face-shrouded Magritte paintings entitled The Lovers. The group of dancers becomes a rose opening and closing around the Prince. 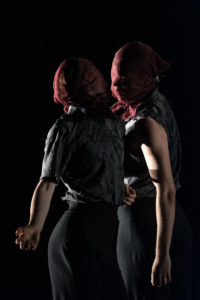 Thus, the characters from the tale are there in TINTLP, but in different, more intimate relation to each other—the many entwined duets of the Prince and the Pilot/Antoine communicate, in a way that words would find it very hard to do, the complex, conflicted and contrary relations between these two avatars of the author’s self. The fact of Prince and Pilot/Vagabond/Antoine being conceived as one person is woven into the whole piece. Antoine accompanies the Little Prince on his tour of the planets. And if Antoine dances longer and more passionately with the Rose than the Prince, it is is because TINTLP is not just the Little Prince’s story but, and more profoundly, his author’s, as epitomized by the  score and its haunting leit motif melody for the accordion. 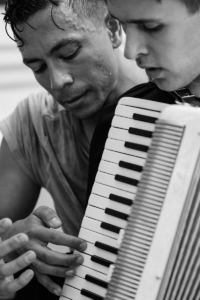 TINTLP is replete with unexpected juxtapositions. Certain elements (like the box that the Pilot draws to house a sheep imagined for the Prince or the hat that really is a snake) are repurposed or reinterpreted to bring front and center the connection for Saint-Exupéry of life and art. The full trajectory of the book is here, but Olivier plays with the chronology. Midway in the piece, the snake seduces the Prince to his own extinguishing, as symbolized by the Prince’s unscrewing a light bulb. Then in a long epilogue, the Prince reignites his own light, after which he leads the pilot/Antoine to a well in the desert and the vagabond’s own epiphany. Thus, both possible readings of the Prince’s disappearance are given life.

In short, with This Is Not The Little Prince, Olivier and his collaborators have made the essential visible, not just in the heart but to the eye and ear. 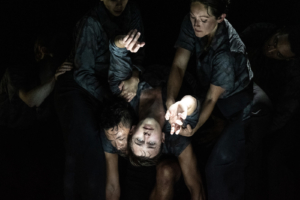 And there are still two more shows!  https://www.brownpapertickets.com/event/3437979