Today is my last regular post for the Whim W’Him blog.

After a year passed in mourning my husband’s death, getting my affairs in order, writing blog posts and reconfiguring my life, I woke up one morning a few weeks ago in a totally different mood. You have got to stop waiting for the right moment to come along, and get cracking, I told myself. Three major writing projects are waiting for me in the wings. And they aren’t going to finish themselves. All three were started long ago and are in various stages of completion.* Each has been reinvigorated over the past couple of years. I am not willing to let any of the three frizzle away and die, but unfortunately I cannot do them justice and the blog as well. At 81, I still generally have my health and my wits about me, but that’s old, and I can’t put these three projects off any longer.* 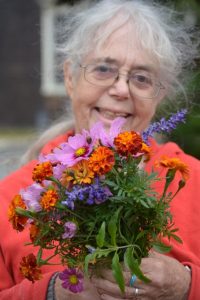 In recent nights, I’ve dreamt several times about the last minute theater week bustle to finish costumes, set lighting, bring the intricate curves and angles, flurry and stillness of a dance to the sweet spot between not-quite-ready and over-rehearsed. I will miss my hours taking copious notes—sometimes, during dress rehearsals or performances, in the dark with my left thumb marking the margin in the notebook and the right trying to write in straight lines (my favorite dance book title is Arlene Croce’s Writing in the Dark, Dancing in The New Yorker). 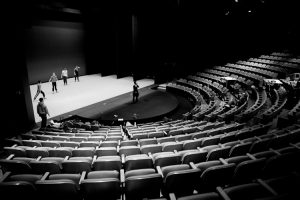 I have loved the sessions with Olivier Wevers, Whim W’Him’s founder and artistic director, discussing new projects and observing his path from dancer to choreographer and artistic director. It is hard to wean myself from being an integral part of the ongoing work of this unique company. But it’s something I know I must do.

I’m still game to write the occasional Whim post about any big changes in the company’s structure, mission or circumstances, and/or offer editing suggestions as usual for Olivier’s program letters or the odd grant proposal. And I’m open to collaborations on new projects like Olivier’s This Is Not The Little Prince. In short, I’m ready to sign on from time to time as a temporary chef, so to speak, just not to plan and cook meals on a regular basis. 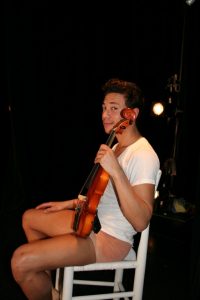 Watching Whim W’Him grow, from the inaugural rehearsal of Three Seasons Olivier’s first piece to be created for his new company, has been a thrilling and surprising journey. Way back then (at the end of 2009), the future cast stood about in clumps in the rehearsal space, Pacific Northwest Ballet dancers a bit to one side, contemporary dancers from Spectrum on the other, and independent dancer Jim Kent (who just retired from Whim this year) in a category by himself. Rather like kids eyeing each other at a middle school dance. 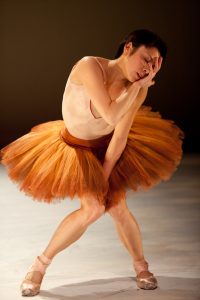 To start with, a whole new vocabulary had to be invented by Olivier then incorporated into the bodies and minds of the dancers. He had strong opinions on many subjects, such as an aversion to pointed feet (hence the now famous ‘sickle pickle’ foot), to rigid backs and to the stereotypical balletic ‘princess-and-her-cavalier’ stance toward partnering. Olivier also wanted to explore the ground rather than emphasize the classical desire to escape gravity. And all sorts of production collaborators were drawn in. 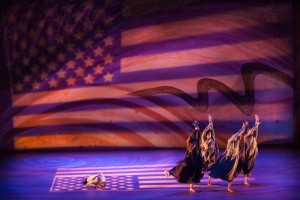 New themes have crowded in to be investigated, some heavy, like societal rejection of same sex love (such as Approaching Ecstasy, in collaboration with composer Eric Banks and the Esoterics, his choral group, bringing to life—in Greek, English and dance—the poetry of Constantin P. Cavafy), drug addiction (Monster—Society), the death penalty (ThrOwn) and gun violence (Erase, by Greg Bokor). And others with no simple subject like the funny and heart-rending, gender-bending Fragments duet, where ‘The snatches of Mozart arias are real, however fragmented, as is stripping down the body to represent the baring of the soul.’ 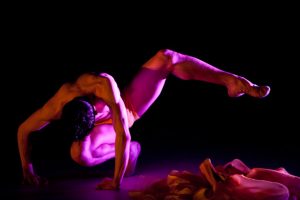 For in line with the company’s name, humor, both broad and slyly subtle, bubble up too in the mix. Olivier uses classical ballet music in unexpected ways to droll effect, as when two males spar in business suits to the music of August Bournonville’s Flower Festival in Genzano, while in a radical repurposing of Les Sylphides, Chopin accompanies a toxic dinner party. There is the sophisticated whimsy of several burlesques of burlesque, say, or Annabelle Lopez Ochoa‘s zany Delicious Pesticides, funny and sinister at once. 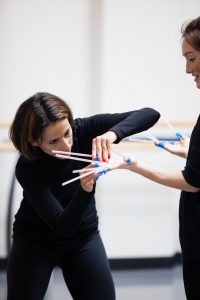 In the course of my blog, in addition to writing profiles of dancers, choreographers, lighting designers (like Michael Mazzola) or costumers (like Mark Zappone), I have also explored other topics that interested me. The role of pain in a dancers life, the evolution of footwear (pointe shoes to barefoot to socks), Whim W’Him’s unusual audition process, what people want from a program note, and dancers’ prodigious memories. To name a few examples. 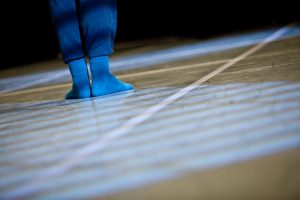 Throughout it all, Olivier has always stressed intention, how essential it is that each movement, large or small, and each sequence, whatever the context, be executed with purpose, for a reason—not necessarily one a dancer could articulate in words (though the dancers have proved themselves over time to be remarkably verbally articulate), but so that the language of dance itself expresses meaning, without filler or padding. This intentional perspective has been reinforced by the work of other choreographers, however distinct their styles and subject matter. 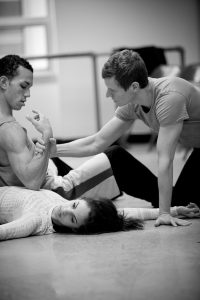 And I have also had the good fortune to observe the nurturing and flowering of Olivier’s deeply held beliefs about the nature of the company he had created. As a long-time dancer himself, he was adamant about keeping dancers, the engine and soul of any troupe, right at the center. This goal has informed Whim W’Him every step of the way. Especially once, a few years into its existence, WW stopped being a pickup group with dancers recruited for each show and became a professional enterprise with fixed salaries and weeks of employment, health and other benefits like massage and counseling. Dancer closeness became part and parcel of Whim’s modus vivendi. It is a small company. Its dancers—even as some retire and new ones join—continue to spend time together in the rehearsal studio, on stage, after hours. And their intimate knowledge and trust of each other, physical, emotional and intellectual, are reflected in performances of exquisite nuance, strength and depth. 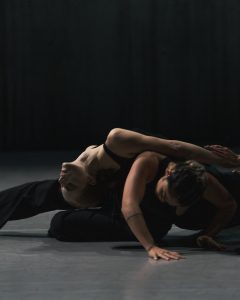 As part of recognizing dancers as the core of Whim W’Him, one of the three regular programs each season has been (since 2015) The Choreographic Shindig. Three choreographers are chosen by the dancers, in consultation with Olivier who offers suggestions on style, themes, mood and the other consideration for a balanced and interesting show but does not decide the final lineup. Well over 100 entries each year make designing this program a challenge for the dancers, one they eagerly embrace. They regularly remark on how much they learn from the process, or as long-time WW dancer Tory Peil once put it: “Making choices and having to sleep with it too! We choose the choreographers. They mold us. The teachers taught!”

All along, Whim W’Him has developed and changed. But during the first pandemic lockdown months, it had to be fundamentally reimagined. In multiple Zoom sessions, the dancers took on extra non-dancing roles. For well over a year the company pivoted to films, later adding in peripatetic pop up performances where no one was close enough to anyone else to be contagious. A whole new platform, with dancer-led classes, videos, and filmed interviews of past choreographers and creations was created. An initial reluctance or dislike of the filming process on the part of several dancers didn’t stop them from joining in whole-heartedly and figuring out how to create within a different arc of time than in on-stage performances. 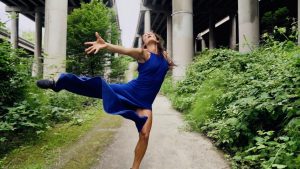 And then, as the unprecedentedly strange months rolled on and outside events impinged on the pandemic bubble, the company took some time off from dancing to reconsider its relation to the social issues of the day. From the start Whim has welcomed diversity, for example in inviting an unusually large number of women choreographers (there is never a dearth of female dancers, of course). But the George Floyd protests and their aftermath led WW to commit more intentionally and explicitly to employing and collaborating with dancers and choreographers of color as well—in other words, the company rededicated itself to gender (ever-more widely defined) and color inclusivity. And always there has been the company’s vital passion for new work. Commissioned creations by a whole host of new and established dance-makers has become one of the hallmarks of Whim W’Him. 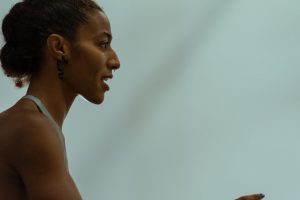 I think that if you had to name one characteristic or quality that most clearly defines what WW stands for, I guess it would be curiosity and a concomitant fascination with continual learning and reinvention. That’s what has drawn me in all these dozen+ years. Although I’m stepping back now out of a need to pursue questions that have come to characterize my own curiosity, I will never forget the lessons about life, craft, art, resilience and laughter that Olivier, the dancers, all the many collaborators and the audience of Whim W’Him have taught me. 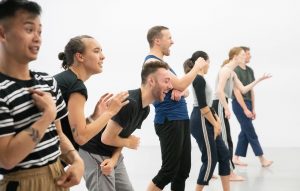 *My three writing projects mentioned above are:

-A novel, Wintering Over, that takes place on Martha’s Vineyard, is ready to go but needs to be shopped around to agents or privately published. My co-author will be 96 next month; she, even more than I, is not getting any younger.
-A children’s book for 8-12 year-olds, centered on the Pike Place Market, is about 1/3-1/2 written. The concept is good, the kids’ characters strong and interesting, the plot appealing, but I ‘ve got to work out the rest of the chapters and write them. Then, of course, market it.
-And finally, there’s On Balance, the novel that I was writing when, and because of which, I met Olivier a couple of decades back. The story of Lily, a philosophy student writing a PhD dissertation on self-deception and Erik, a Danish ballet dancer, OB was first written well before Whim W’Him started and I, simultaneously, began the blog. Much reading, writing and experience later, I am about a third of the way into totally reworking it. It is edgier now, cleaner and clearer in thought and style, and more in line with my current views on life and coming of age (a never-ending process). But there is much still to be done.