The best metaphors grow naturally out of both the thing symbolized and the symbol. Greg Bokor‘s ERASE is surely one of these. 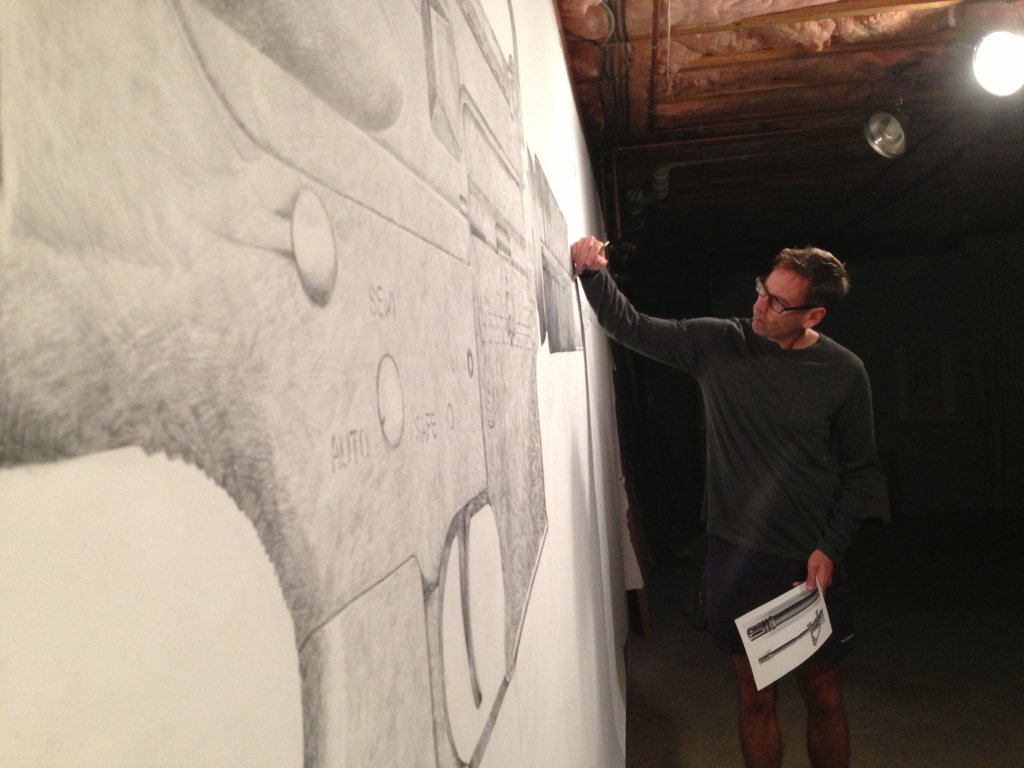 In April of 2013, a few months after the Newtown, CT school shooting, Greg, a successful advertising creative director and graphic artist, came up with a project that would allow him both to put his considerable talent to use in response to gun violence in America and to explore something more in the direction of fine art. His idea was to create, in pencil, a huge, very accurate representation of an assault weapon (AR-15) and then provide erasers, imprinted with the names of gun victims, so that viewers could rub out the gun.

The result, ERASE—entered in the 2013 Grand Rapids ArtPrize event—astonished everyone by being completely erased within the first 4 hours it was open to the public.
Erased, but not altogether effaced.
The shadow image of ERASE bore testimony to the underlying metaphor: how we can regret and try to expunge something like gun violence, but it always leaves a visible residue that won’t so easily go away. 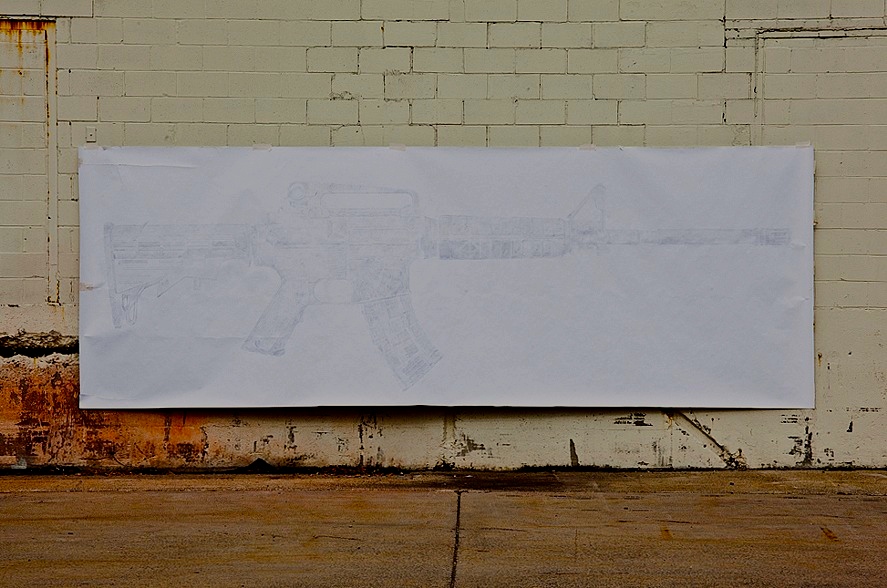 At Grand Rapids, the four judges gave Greg Bokor a Special Recognition Award for ERASE. “Artistically, it is an excellent piece,” the judges wrote in their award statement. “The fact that an artist would create a beautiful work that, to be completed, must be wiped out, shows the sacrifice that artists make to bring meaning into the world.”

The conception and execution (in both senses) of ERASE made a lasting impression on Whim W’Him artistic director Olivier Wevers (and me), at Grand Rapids Ballet last summer where Olivier was in residence to create his version of Midsummer Night’s Dream. He wrote to Greg, “a lovely email note suggesting, in a very appropriate way, that it would be fantastic to do something together.” Greg says he immediately loved the idea of collaborating with another artist. Instantly Bound, the piece that Greg’s ERASE will complement, was first done last spring for Philadelphia’s BalletX. Instantly Bound will be the opening work in the program this weekend (January 17-19, 2014 at Cornish Playhouse, formerly Intiman Theatre/Seattle Center Playhouse). And in the lobby, along with related works by local artists Cynthia Linet and Amy Anderson, Greg’s piece will be waiting for erasure. 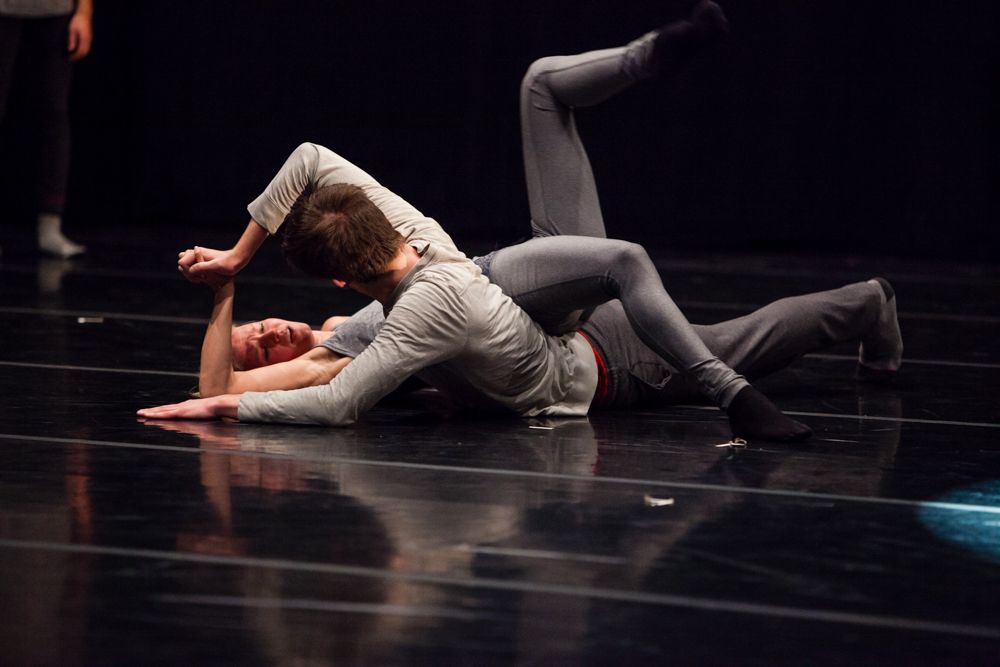 Greg Bokor grew up in an artistic household. His mother and sister were artists too.
“I’m always thinking about things, differently, questioning, observing,” he says and adds that he guesses he’s an artistic person “to the bone.” So going to art school was the obvious choice. As to how he got into advertising, he was “pushing a broom,” to make ends meet while attending Detroit’s College for Creative Studies. Advertising offered a lot of freedom. He did interesting work, won awards and generally earned a good living. Over the years, however, he got to thinking more about the sort of fine art that might be in galleries or that would provide an outlet for his talents, feelings, and his “sense of what is needed in the world.” ERASE is the first such project for Greg. Continuing the family tradition, his daughter, who helped with some of the drawing of the first ERASE, now studies at the School of the Art Institute of Chicago (SAIC).

I asked Greg a few questions about the current ERASE iteration. The drawing for Seattle, at 12 ft by 4 ft, is a bit smaller than the Grand Rapids version (which was 20′ x 8′). It was done in his basement on 70 lb cold press paper, with mostly 5B graphite pencils (and others in that range of quite soft leads). Rolled up inside a sturdy tube, it arrives with him on a plane from Boston Thursday, the day before opening night. For the first exhibit, 2000 pink erasers were hand-stamped with names of 83 victims killed in the Columbine, Virginia Tech, Aurora and Newtown massacres. Only about 600+ erasers were used to obliterate that first drawing, and those of course weren’t used up. As erasers are surprisingly heavy, they were all shipped to Seattle and are now waiting in the lobby for the great erasure will take place… 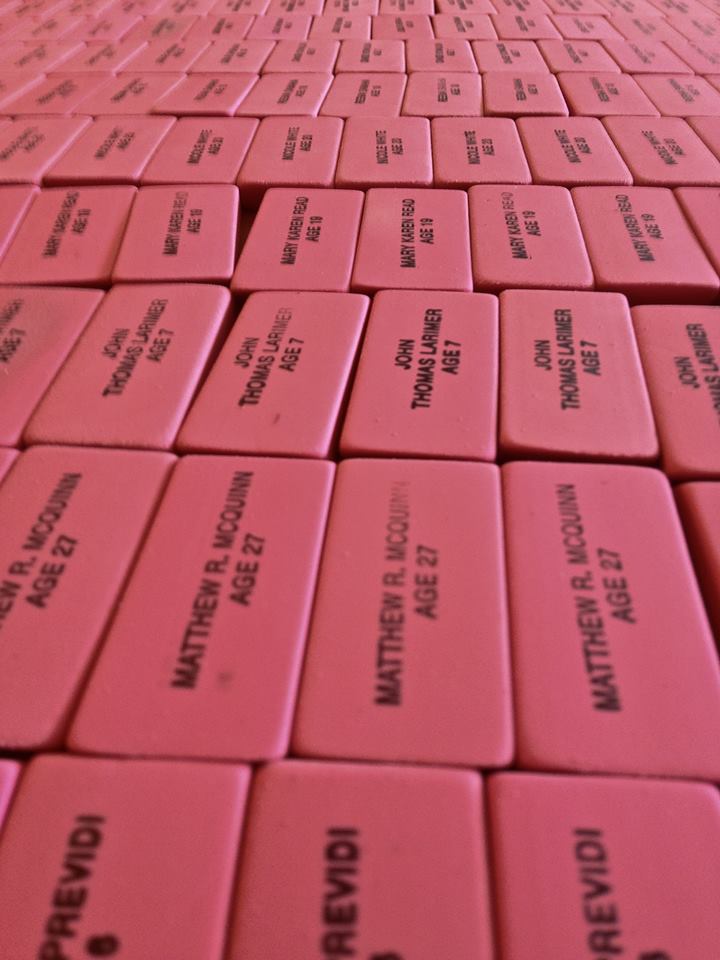 I’ll end with a quote from a Grand Rapids TV news program discussion of ERASE: http://www.woodtv.com/artprize/artprize-artist-aims-to-erase-gun-violence
“

[Greg Bokor] said his piece is not advocating banning all guns, and also admitted he doesn’t know the right answer. Nor does he think that ERASE makes the problem disappear. ‘What I hope it will do is keep the conversation going and inspire some people,’ he said. And to those who say the Second Amendment gives them the right to bear arms, Bokor says they simply don’t have to become involved in his work. “They don’t have to erase it. They can just walk in and view it as a beautiful machine,” said Bokor. “It’s won design awards. It’s a beautifully designed machine, and you can appreciate it for that, or you can see it as a symbol of violence and sorrow for so many people who have lost their loved ones.”

During the intermissions at all three performances of Instantly Bound this weekend, the prototype of a beautiful custom-made limited edition book on the process of making (and unmaking) ERASE will be on display and orders taken. On sale as well will be an elegant print of the first erased ERASE.
Please also come write your reactions in the comment book on the table in the lobby.