Happy 2018!
May the world this year increase its store of caring, peace and understanding,
of empathy, compassion and love. 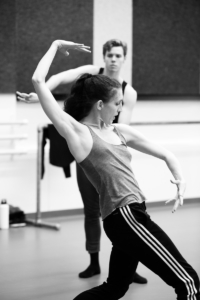 “The commissions keep coming for Gabrielle Lamb,” wrote Dance Magazine a few years ago. She is “a dancer of stunning clarity who illuminates the smallest details—qualities she brings to the dances she makes, too.” Gabrielle, whose first piece for Whim W’Him will premiere in the CONFIGURATE program, (January 19, 20, 26, 27, 2018 at Seattle’s Cornish Playhouse) has been dancing her whole life. She knew for certain from at least the age of 5 that this was what she meant to do. As a child in Savannah, Georgia, where she grew up and got her first exposure to recreational (rather than professional) dance classes, she was also naturally drawn to making up dances, along with costuming and all the other aspects of putting on a show. 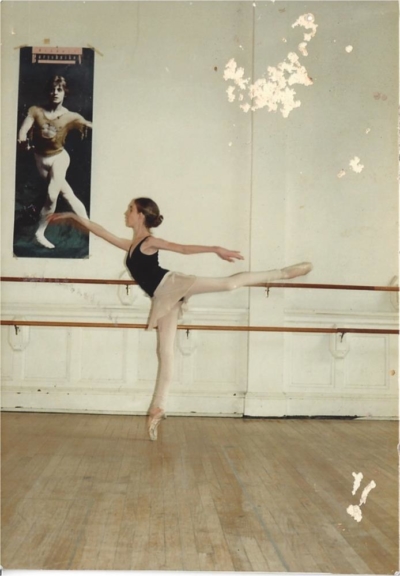 But serious ballet training suppressed the choreographic urge. Spending summers with the Boston Ballet School and PNB, Gabrielle moved at the age of 15 to Boston to continue more traditional classical training. Choreography stopped until her late twenties. The work and its demands had a rigidity that didn’t encourage invention in movement, particularly by girls. It was intimidating. “All the bosses were men,” she told me. “I didn’t imagine that I’d ever be a boss. I didn’t admit it even to myself—but my parents remembered.” She added, “Sometimes I think that if I’d gone away at 10, not 15, I might have had a bigger career in classical ballet, if I’d got professional training sooner—I had the physical talent for it. But I’d have been less likely to be a choreographer.” 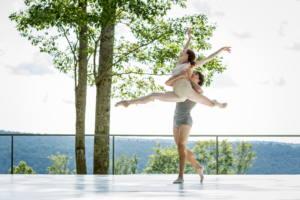 With Aleks Subotic at Jacob’s Pillow, photo by Glenn Goettler

In the above-quoted Dance Magazine Q&A, Gabrielle was asked why there are so few female choreographers. Her answer was intriguing in itself and illuminating of how her mind works: “I actually feel like there are a lot of us in my generation. Maybe the line is whether you use pointe shoes or not. Thus far I haven’t. There have been some requests that I’m trying to figure out how to deal with. Somebody recently said something interesting to me: that men in ballet are already outsiders. You’ve had to make a decision to be different. So I think it’s easier to take that step towards creating something of your own. Whereas for a woman, ballet is a very conformist thing to do—being pretty, following instructions, staying in line.” 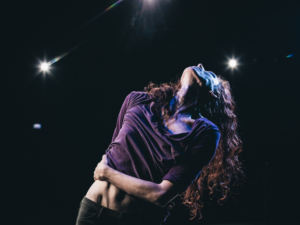 Still, her professional career, dancing in Boston, Pittsburgh, Prague, Helsinki, Montreal and New York, among other place, exposed her to the many ways choreographers thought about and explored movement and meaning. What she learned she stored up. “I was influenced by all of it.”  She joined Les Grands Ballets Canadiens of Montreal in 2000. Yet it was only 5 years later that Gabrielle again started creating movement herself.

“I always knew in the back of my mind that I would choreograph,” she says. “It was an accumulation of things that pushed me to start—learning more about improvisation, working in a company that did a lot of new creations, and simply getting older and knowing that I needed to start. Among other things, I found inspiration in a quote by Anais Nin, ‘And the day came when the risk to remain tight in a bud was more painful than the risk it took to blossom.’

“My grandfather died around that time, and it loosened me in some way—maybe because he was an eccentric guy with a nonsensical sense of humor. I realized that I could use humor and strangeness in choreography. It didn’t have to be serious or make sense in the usual way; and it didn’t have to be all mapped out before I started. So I mentally dedicated that first real work to him. It was a 12-minute trio that drew from all over the place—there were references to the evolutionary timeline, to the moon landing, and to ways that dancers warm up before class. It was the first time I felt I could be really creative and intuitive in choreography.” 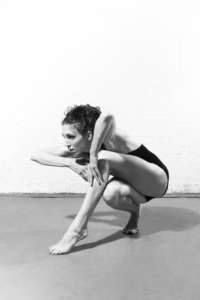 In 2009, Christopher Wheeldon invited her to join his new Morphoses company in New York City. “Wheeldon works in more traditional ballet language than I do,” Gabrielle said, in an interview with the Salt Lake Tribune. “But from him I understood how to work with dancers in layers. We clarify as we go. In the beginning when creating movement phrases, we just work on coordination. Then when we start to combine the phrases we talk more about focus and shaping and musicality — it’s an organic process.” In Montreal, she had also worked with arresting choreographers, such as Ohad Naharin, from whom she learned “experiencing the moment internally, rather than looking at your body as if in a mirror” and saw how he could “create really ingenious transitions that make the unexpected seem inevitable.” In her own work, she told the Tribune, she likes to “ride the body’s coordination — there can still be a lot of athleticism and virtuosity but you can get more if you give a burst of energy and then coast on that.” 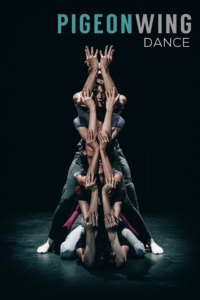 Although in rehearsal Gabrielle is an incredibly lithe and compelling mover, choreography is now a more central passion. She was in a film a year ago, is also a videographer and animator, and only dances, “if someone invites me and it’s interesting.” In 2016, she started her own company in New York, Pigeonwing Dance. “I didn’t want to say I had a company. But then it seemed important to announce it to the world.” Running a company entails “lots of grant writing and scheduling,” yet there is something liberating and inspiring about not being with dancers just for the 2 weeks or so of commissions for other groups. 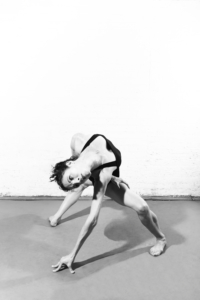 Alexandra Villareal wrote in a Huff Post essay on Ballet Memphis, in which she praised a piece by Gabrielle, “Religion. Sexism. Vice. Body image. Race. Dance is one of the most physical languages offered to man and explores the world through a visceral lens that makes words obsolete. It can construct relationships through body positions and analyze themes with a hand gesture.” And yet on her company website, Gabrielle also writes a stimulating Blog that explores in clear, honest and well-observed words, such timely and absorbing subjects as body image, hands and choreographing for groups. Dancer, award-winning choreographer, filmmaker and writer (among other talents) Gabrielle Lamb is a Renaissance woman.

Next up: Gabrielle in the studio with Whim W’Him.