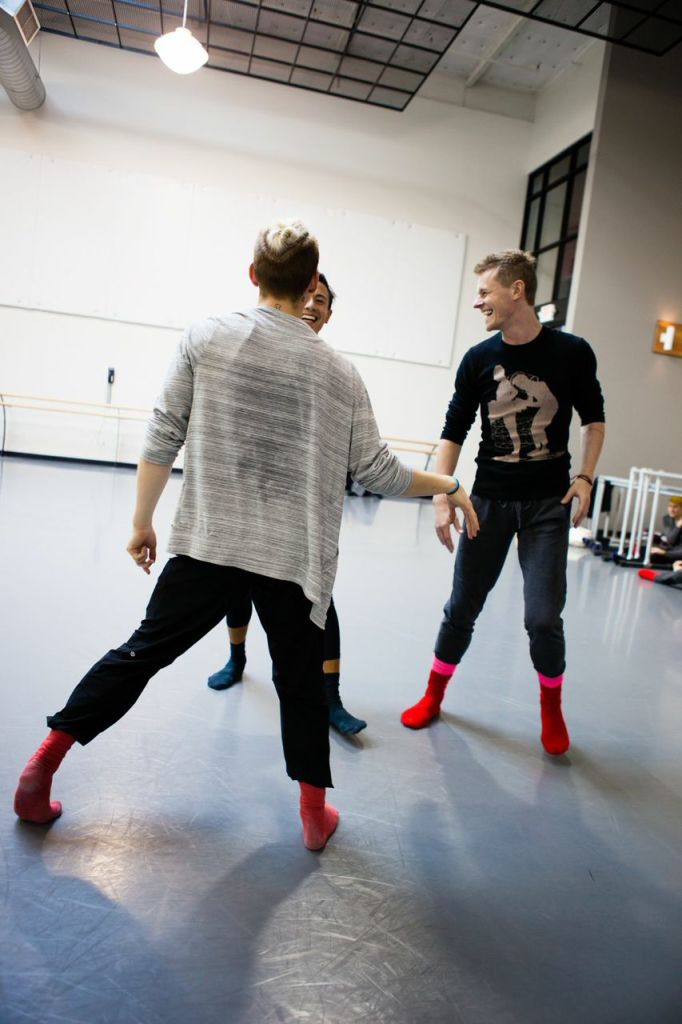 “This is almost the most unclear and uncertain that I’ve been,” says Olivier Wevers, Whim W’Him‘s artistic director, “but somehow I’m not as scared of it as I was.” It seems evident in the extra level of ease and humor in the studio these days, even in a company known for its easy-going atmosphere and camaraderie. 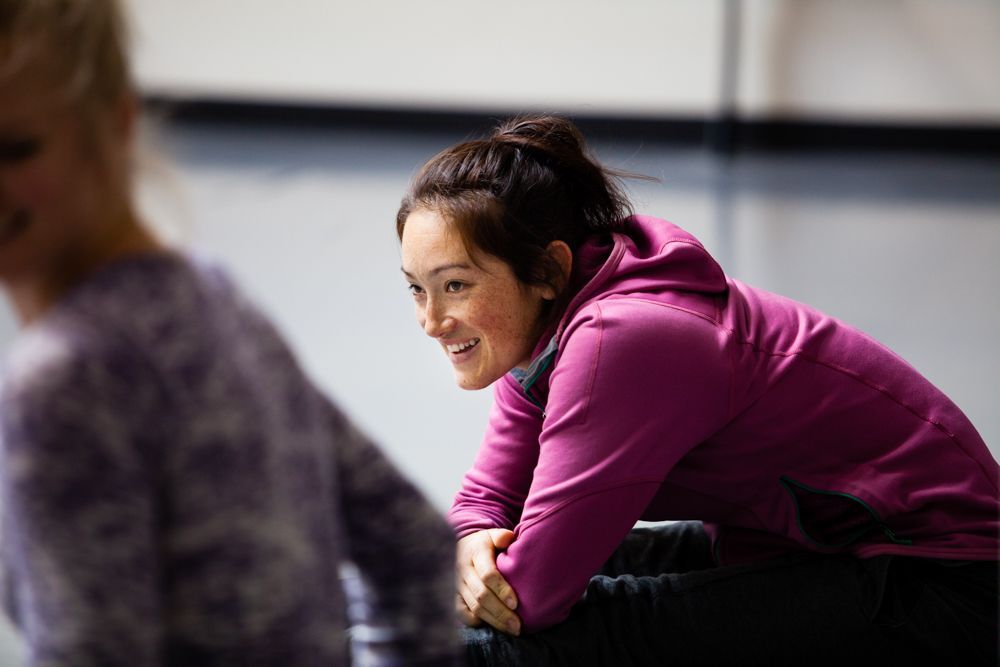 Very early in his choreographic career, Olivier approached his first rehearsals with a whole panoply of specific steps in mind. That rigidity/specificity soon relaxed, as he realized that he created far better movement if he waited until he was in the room with the actual dancers before deciding what to ask of them. But there are different layers of willingness to let go. As time passed, Olivier has felt less of a need to direct the process too strenuously, gaining the confidence, and maturity as a choreographer, to make (or let) his rational brain stand back and allow a more unconscious process take place. 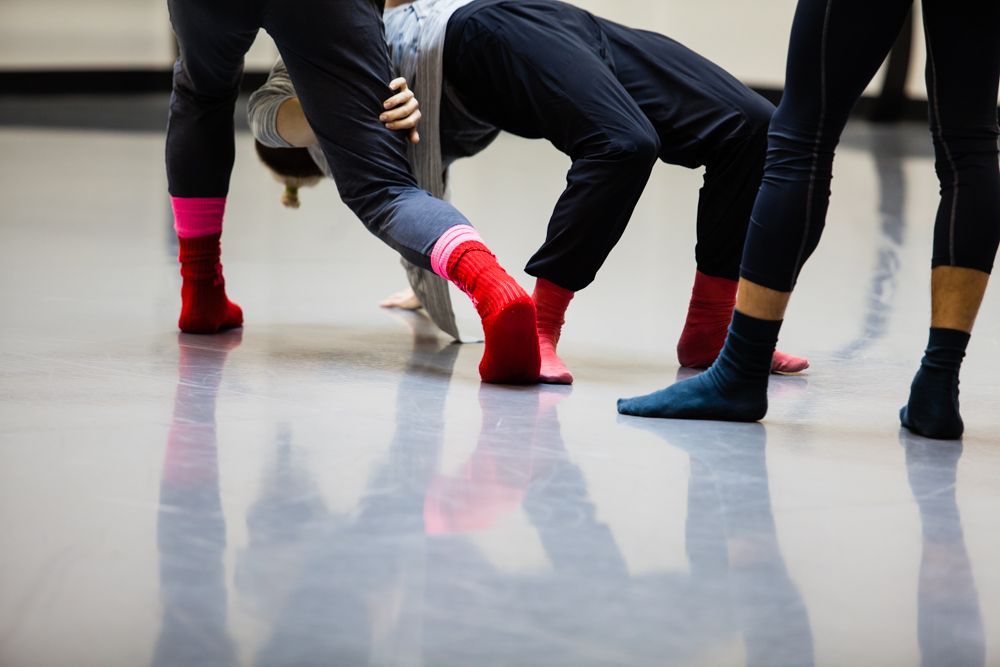 In the new piece now being choreographed, to the music of Brahms (stretched and transformed, of which more in a later post), Olivier says he has been “kind of accepting—no, embracing that not knowing, abyss, black hole. Embrace the question mark!” He goes on to say, “Usually it’s more mapped in my head, the story line. But this time, I’ve been leading or creating by trusting and letting not my reason but my emotions guide. It’s been thought a lot about, but the process is…” He pauses. “I haven’t been letting the fear and stress of finishing the piece” get in the way of it evolving to its own natural completion. “I’m letting it happen,” he says, sounding quite surprised and rather delighted, “following my own search and discovery for my voice.”

In fact, Olivier muses, “It’s very comforting—knowing there’s going to be a next creation a few months later and another and another. Failure isn’t final, it’s part of the process.
At the beginning, there was lots more pressure. Now I can walk way closer to the edge.
I can take more risks knowing that.”

But the way it’s working out in the studio is anything but grim or focused on failure. There’s a lot of laughter during rehearsal, as the dancers stretch and visibly bind more closely. Joy sometimes even infuses the faces of the dancers dancing, which for some reason is oddly rare in theatrical dance (outside the standard fixed classical smile).

Olivier is still distilling the story of this piece, the order of things. There is a germ of an idea here, a strong one and more subtle than it may seem at first blush. This is not linear. It’s more abstract, rather, he says, a bit like the 2011 film Momento, where a story is told alternately forward and in reverse. Right now he is “creating pieces, developing vocabulary, steps. Pushing.” Much later in the process, he will form a collage of the pieces, trying them out together in different combinations “to see how it all will translate best what I want to say.” So far, among other things I’ve seen, is a nice clear, beautiful solo for Justin, as well as a Tory/Kyle duet in which their burgeoning dance partnership can be seen to flower further. And there’s a wonderful duet for Jim and Justin. 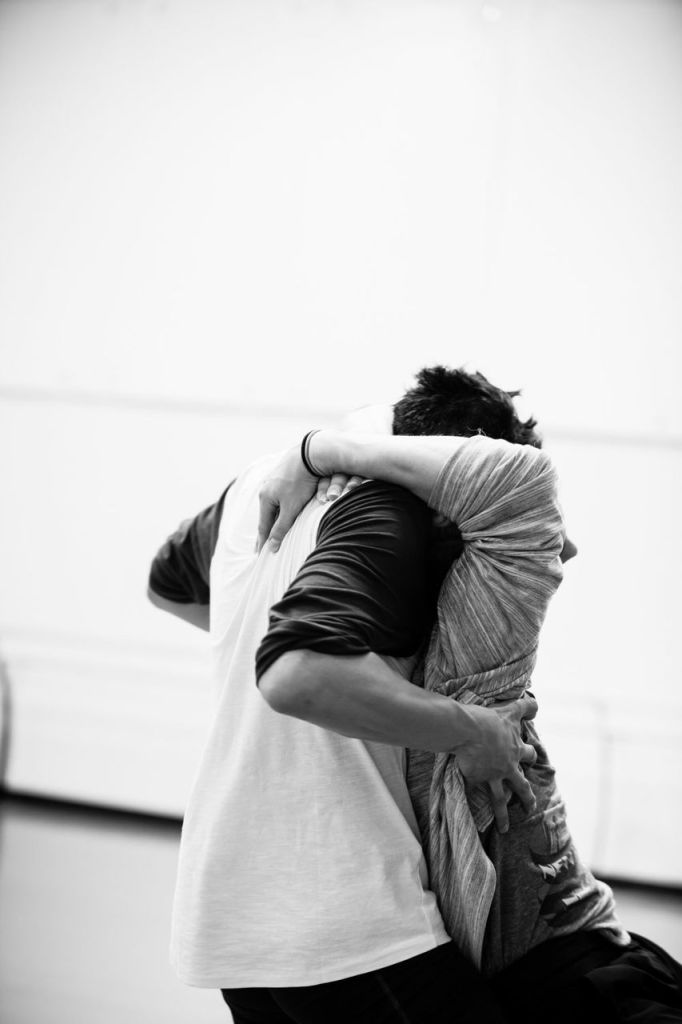 In 2011, with the “Society” section of his three-part Monster, Olivier first choreographed about same love (as in the next year’s now renowned Macklemore & Ryan Lewis song of that name). Happy to be back to presenting two men together, Olivier is again “pushing the envelope of the same sex duet.” Unlike that earlier work, with its wounded, almost cowering sensibility, this piece explores other facets of love without particular regard to gender. One of Olivier’s interesting ideas here is to show, with similar movements and interactions, similar emotional relationships in single or double-gender couples, asking onlookers to inquire within if—and/or why—we are more uncomfortable with same sex than hetero bonds? 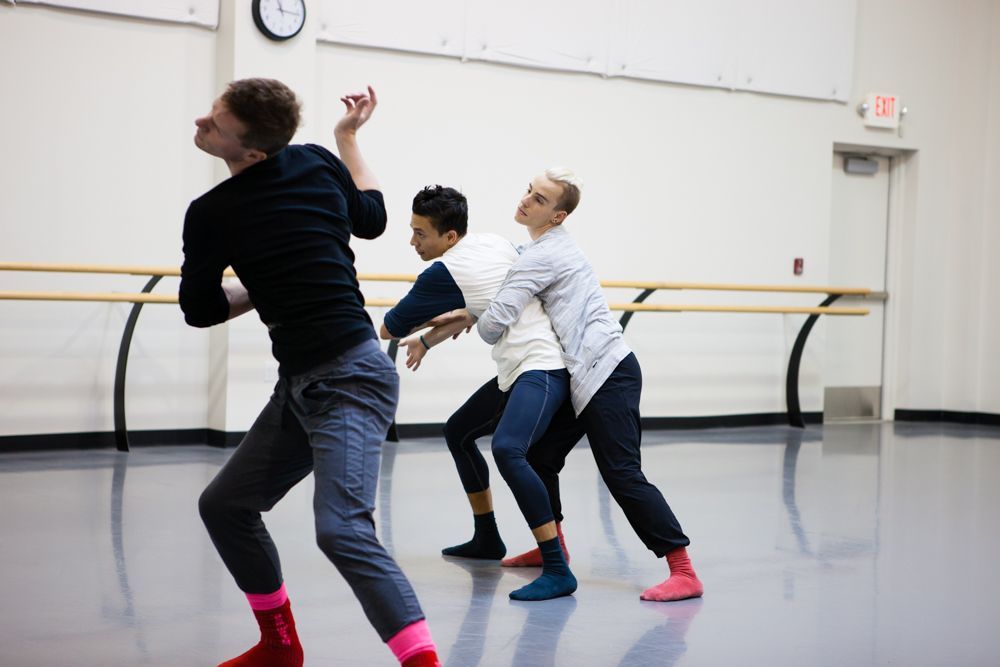 The working title of the piece is We are not the same. Many forces in our lives herd us together, urging conformity. “Organized society and the media,” says Olivier, “want the message of sameness. But we aren’t the same, with the same loves, interests, and so on. Equal is not the same. We have to be tolerant and accept that, embrace uniqueness.”

So on the one hand, Olivier takes as his theme the ideal of equality—a world where, regardless of sexual preference or any other distinction, it is merely expected-without-comment that we all have the right to want and do the universal range of things. To fall in love, have legal rights, raise a family, earn a fortune or chose penury, live in a high rise or close to the land, whatever—the whole gamut of simple or complex human emotions and experiences. On the other hand, he is also saying: Embedded in our equality must be the further recognition that each individual has a unique, personal irreducibility and is, in comparison to anyone else on earth, different/unlike/not the same.